He's big, he's back, and he's ready to sweep you up in his warm, hairy palm and take you on a rollicking romantic adventure! 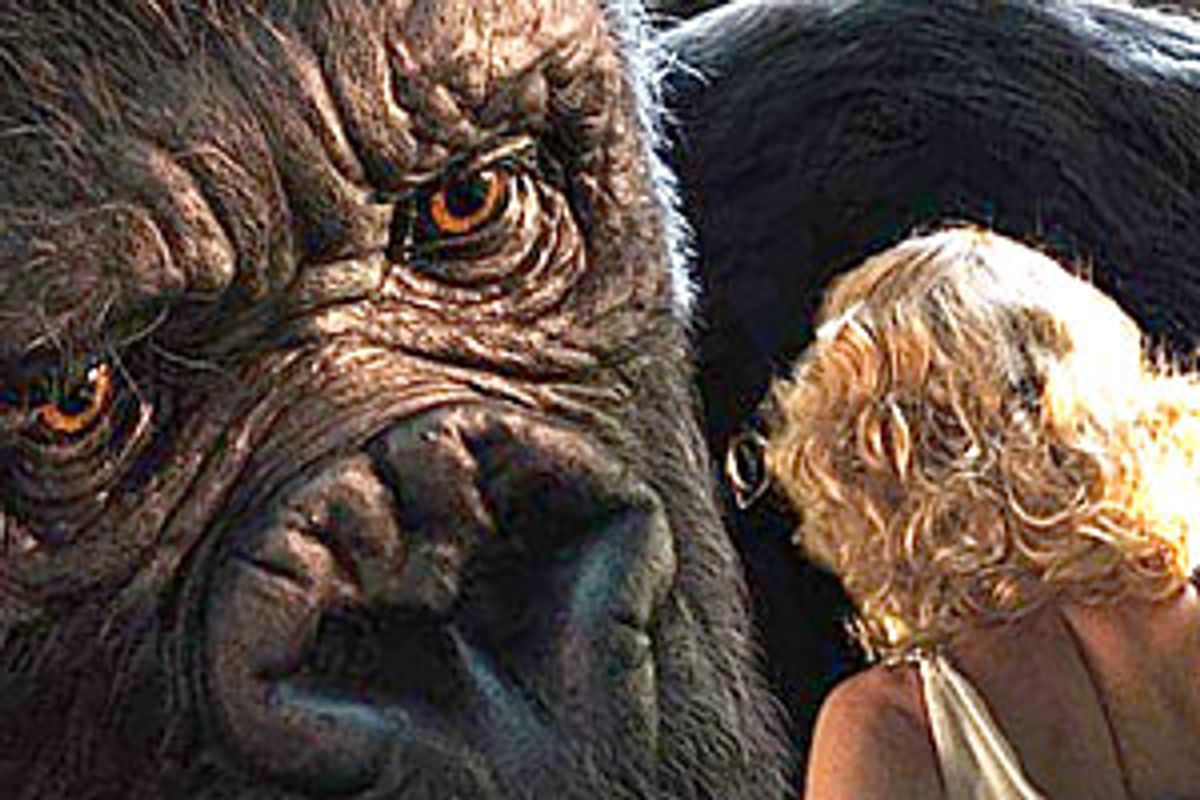 There's no doubt that, because the studios are so desperate for your moviegoing dollar, movies are getting bigger. It's the pictures that are getting smaller: Particularly during the summer and at holiday time, there's no shortage of expensive vehicles that sure feel important, and yet are sorely lacking in imagination and emotional resonance. A big movie doesn't have to be a bad one. And yet the afterglow of most blockbusters lasts 10 minutes, if we're lucky. We may leave the theater with conflicted feelings: We've gotten our 10 bucks' worth, and we've also been robbed.

But good things do come in big packages. The trick for any filmmaker is to find the small movie within the big one, which is exactly what Peter Jackson does in "King Kong." Jackson, who was an intelligent, capable filmmaker even before he made the majestic and enveloping "Lord of the Rings" trilogy, knows just what to do with a palette as big as this one. The scale of "King Kong" may be large, but it's never needlessly, or willfully, overwhelming -- which isn't to say Jackson isn't a showman. Like Merian C. Cooper, who made the groundbreaking (if somewhat sadistic) 1933 original, Jackson is out to impart a sense of adventure. His movie is bathed in an aura of movie-palace grandeur, and, with the exception of a somewhat saggy midsection, it holds you tight from scene to scene. But in spirit, Jackson's "King Kong" owes much more to John Guillermin's wonderful, sorely underappreciated 1976 remake: Like Guillermin, Jackson is far more interested in the relationship between the girl and the ape than he is in the power of special effects for their own sake. As big as "King Kong" is, its sense of intimacy is what really sticks with you. This is an epic Big Little Book of a picture.

Like the earlier versions, this "Kong" begins and ends with hubris: In Depression-era New York City, small-time, cartoonishly sleazy movie director Carl Denham (a made-to-cartoonishly-sleazy-order Jack Black) has obtained a map to a secret island, on which he hopes to film a blockbuster adventure. But he finds himself minus a star and he needs to find a substitute, someone who will fit into her costumes. On the street, he sees just the right girl: Out of desperation -- and out of work -- the very delicate-looking Ann Darrow (Naomi Watts), a vaudeville performer who'd like to be a "real" actress but who can barely make a living as it is, steals an apple from a fruit stand. Just as the vendor catches her, Denham steps forward and pays up. He brings her to a coffee shop, buys her a meal, and before long, he's convinced her to embark on this dangerous moviemaking adventure, clinching the deal by revealing that a playwright she greatly admires, Jack Driscoll (Adrien Brody), is writing the screenplay. "You're perfect, look at you," he tells her, his eyes blazing partly with delight at the amount of money he thinks he can make off her, and partly with amazement at the purity of her beauty: "You're the saddest girl I've ever met."

So their adventure begins: They board a crusty old steamer with a shifty-looking captain (Thomas Kretschmann) and a cook named Lumpy (Andy Serkis, who acted the part of Kong to give Naomi Watts a living presence to play off when she was filming the blue-screen sequences). Ann's costar-to-be, Bruce Baxter (Kyle Chandler, in a wry, funny little performance), is also aboard, as is Driscoll, whom Denham tricks into going out to sea. Nothing seems particularly untoward -- at least if you disregard the stash of bottles below deck, marked with the ominous word "CHLOROFORM" -- until the ship hits an unexpected blot on Denham's map, home to a very big monkey who has no idea what's about to hit him.

Jackson (who, along with Fran Walsh and Philippa Boyens, also co-wrote the script, adapted from Cooper and Edgar Wallace's original) knows how to balance lightness of spirit with an almost oppressive ominousness. There are scenes on the island that are terrifying, particularly the crew's first encounters with the native population. If you're looking for anthropology, you won't get it here -- Jackson steps rather gingerly around old-Hollywood notions of "savages" without subverting them. But what he does show us is a group of people who, it's easy to see, have become zombified by their fear. They want to serve Ann up to the beast who rules their island, and we can't blame them: They've been subject to Kong's tantrums for too many years now, and, exhausted and terrorized, they're running out of options.

The most significant problem with "King Kong" is that the crew spends far too much time on that island, outrunning a host of critters that include veggisauruses, aggressosauruses, giant mosquitoes and, most frightening of all, a squad of vicious sea-cucumber-type things that resemble uncircumcised penises outfitted with vagina dentata. These action sequences are intended to rev us up, but they really only weight us down. Because as scary as they are -- and as appealing and blazing sexy as Adrien Brody is, as Watts' romantic counterpart -- all we really want to look at are Ann and Kong.

Because Jackson's "King Kong" is less an adventure than a romance, and it's unapologetic about that truth. The picture was shot by Andrew Lesnie (also the D.P. on the "Lord of the Rings" trilogy), and it has a soft, muted glow. Its colors may be vivid, but they're not vibrant -- they're the color of memory. And Watts' Ann, when we first meet her, is like a memory. Of all the movie's characters, she and Kong are the only ones who look to have been transported from another time. (The rest are merely in costume -- which is good enough for them, but still, we can see how they're a world apart.) Watts' Ann, with her strong shoulders, trim hips and endless legs, looks just right in Depression-era clothes, like a fashion sketch come to life. But it's her face -- particularly the way her eyes always seem to be looking for home -- that doesn't seem to know, or care, what time it is.

As Denham observed, she may very well be the saddest girl you've ever met, a match for the saddest monkey. When Kong first sees Ann, he fingers her satiny blond hair with a clumsy thumb and forefinger. He's a big galoot with no manners -- he thumps his chest with macho overexpressiveness, unaware that he has anything else to say -- and once Ann gets over her considerable fear of him, she sets out to teach him a thing or two about actually talking to a girl. She uses some of her old vaudeville tricks to amuse and distract him, and also simply to prove that, somehow, she can get the better of him. She juggles; she turns cartwheels; she does a funny Egyptian dance. Kong, amused, responds by knocking her down, which he thinks is incredibly funny. She upbraids him for it; he turns away from her in a huff. Kong is just learning that animal attraction is nothing; when it comes to love, it's communication that really matters.

This Kong is a vision lifted straight from our dream life at the movies -- certainly not from our real lives -- and yet he seems vividly alive. With his heart-shaped nose, he's a simian valentine to a lost world. In the 1976 version, director John Guillermin gave us Kong as a tragic, poetic hero, an idea Jackson expands: When Kong is captured from the island, the last thing his drowsy eyes see is Ann, in tears over his suffering. The scene is so operatically painful, it's almost impossible to watch. This is Jackson's way of signaling what we all know is to come -- that Kong will meet his end at the top of the Empire State Building, and Ann will bear witness to his suffering. But before that happens, Jackson gives us one image to cling to: Kong, after scooping up and discarding a number of generic-looking New York City blondes, has finally reconnected with his blonde. He makes a place for her in the palm of his massive hand and heads for the park -- it's nighttime, and the city has grown blessedly, and unaccountably, quiet -- only to realize that he can't walk across the icy pond at its center. So he does what any resourceful giant ape would do: He sits on his butt and he slides across, whirling and twirling on the ice with Ann, his dance partner, safe in his grasp. Kong is the very big ape at the center of a very big movie, but here, he feels unaccountably small. He's everything we come to the movies for, and as overwhelming as he is, he never lets us forget that less is more.