Can a more scientific approach to fishing regulation save dwindling U.S. stocks? 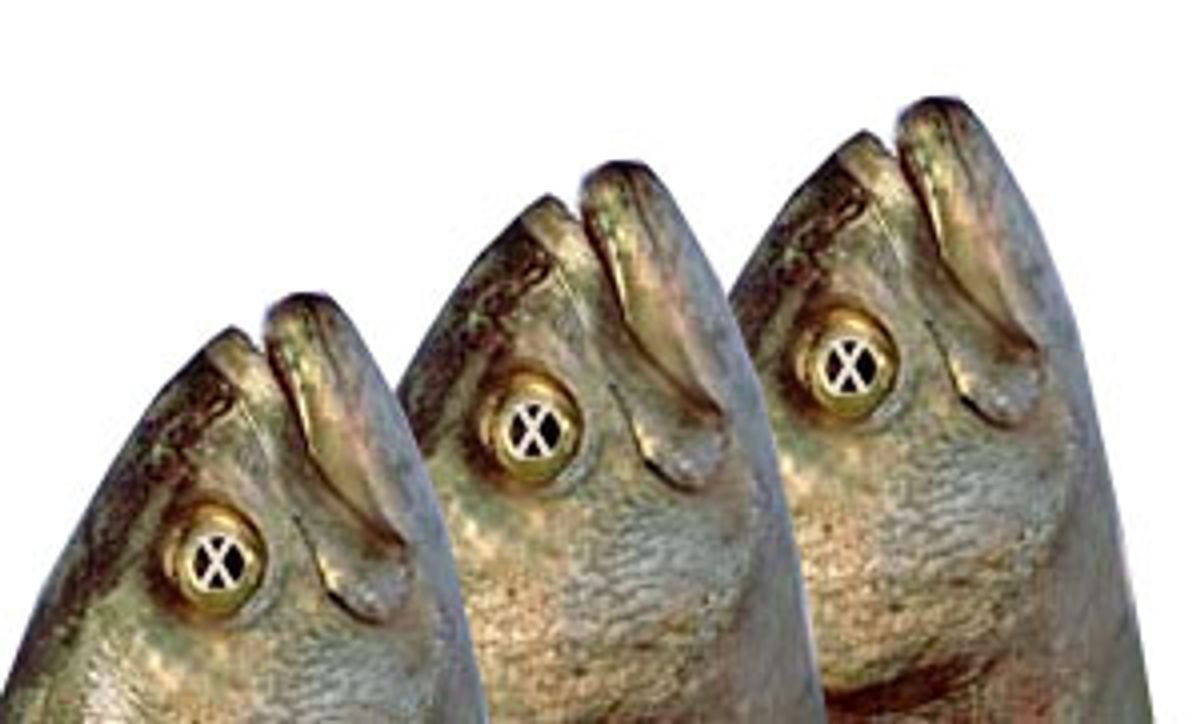 Scores of fish stocks are dwindling in U.S. waters (as they are around the world), and only one of the eight federal fishing zones in the United States is widely considered to be managed sustainably. This year, the National Oceanic and Atmospheric Administration categorized nearly a third of the federally managed fisheries that have been assessed as "overfished" -- meaning their populations are depleted and won't rebound without deliberate action to limit fishing activity.

The Magnuson-Stevens Fisheries Conservation and Management Act (MSA) -- the main U.S. law governing fisheries, passed in 1976 and last updated in 1996 -- is now up for reauthorization. Last month, a new round of MSA amendments were proposed in a reauthorization bill introduced by Sens. Ted Stevens, R-Alaska, and Daniel Inouye, D-Hawaii, the chairman and ranking member, respectively, of the Senate Commerce Committee. (Strangely enough, the Department of Commerce is responsible for fisheries oversight -- that fact in itself may shed light on the poor management of this industry.)

The amendments would maintain the law's current environmental standards and for the first time require regional fisheries managers to impose an enforceable limit on the amount of fish that can be caught in the waters they oversee, with a penalty if the cap is surpassed. The bill is scheduled for markup in committee Thursday and is expected to go to a full Senate vote in February. (The House is currently working on its own fisheries bill, which is also expected to surface early next year.)

In the meantime, industry reps and environmentalists are lobbying committee members for further modifications to the legislation, about which both sides have gripes. Some commercial interests are trying to remove the proposed penalty for exceeding harvest caps and weaken existing requirements to rebuild overfished stocks, while environmental groups are vigorously defending those provisions and requesting stricter scientific standards for determining harvest limits.

"On the one hand, [Stevens and Inouye] deserve credit for resisting enormous pressures to weaken current law and adding some key protections," said Sarah Chasis, a senior attorney for the Natural Resources Defense Council and leader of the group's lobbying effort on MSA. On the other hand, she added, the bill needs to be strengthened to more fully implement the most important lessons that have been learned in the past decade from the one fishery region in the country that's thought to be in good shape -- the Alaska region, managed by the North Pacific Fisheries Management Council.

The MSA established eight regional management councils to oversee fisheries all along the U.S. coasts, from Maine to Hawaii. These regional councils are largely responsible for determining their own allowable catch limits and habitat-protection rules, which is why management practices differ so dramatically from region to region.

The North Pacific council has developed what's known as the "Alaska model," hailed as a successful model for sustainable fishing by both enviros and the U.S. Commission on Ocean Policy, a research group appointed by President Bush. What sets this model apart from the practices in other regions is that scientists determine the maximum amount of fish -- known as "allowable biological catch," or ABC -- that can be extracted from a marine environment without destabilizing the species.

"North Pacific sets harvest limits at or below sustainable levels defined by fishery scientists, while most others determine allowable catch according to commercial factors," said Lee Crockett, executive director of the Marine Fish Conservation Network, a Washington, D.C., nonprofit.

A 2004 report from the Commission on Ocean Policy recommended that all regional fisheries councils be required to set harvest levels at or below ABC determinations made by scientists.

Stevens, anxious to spread the advances made in his state's fisheries, says his bill "almost codifies what Alaska's been doing." And yet the legislation doesn't require catch levels based on ABC determinations -- rather, councils need only "consider" scientific recommendations in setting harvest levels.

That's the most worrying weakness in the legislation, according to Crockett. It also concerns NRDC's Chasis: "A key to healthy fisheries is to require science-based harvest levels," she said. "That's been the tradition in the North Pacific and one that should be followed in every region. We need the law amended to require this; otherwise it won't happen."

In some of its biggest fisheries, the Alaska model combines this science-based method with what's known as "rationalization" -- a fancy word for effectively (but not technically) privatizing the fishing industry. Once a cap is determined by fisheries scientists, the regional management council divvies up quotas among individual fishing outfits within the region, specifying the amount of fish each is allowed to extract. Because these quotas can be traded and leased among fishing interests, they function more like privatized commodities than the permits that are issued in non-rationalized fisheries.

While a scattering of rationalized fisheries have recently been established in regions such as the Mid-Atlantic, none compare with the scale of those in Alaska. But if all goes according to Stevens' plans, there will soon be many more fisheries shifting to the rationalized structure: language in his bill would enable fisheries nationwide to adopt this system if their regional councils vote to do so.

Enviros have varying degrees of enthusiasm for this approach. David Festa, oceans program director for Environmental Defense, hails it as a "revolution in the making in terms of how fisheries are managed -- it will do for oceans policy what pollution trading is doing for clean-air policy." He argues that if industry players are given a fixed share of the resource pie, they will have an interest in ensuring that the pie grows rather than collapses. "The reasoning is, as the pie gets bigger, they get richer," he says.

Others, such as Crockett of the Marine Fish Conservation Network, see pitfalls in rationalization. They caution that it favors big commercial fishing trawlers rather than smaller outfits, given that the largest quotas are issued to the most established and biggest players in the region -- a system that doesn't allow the little guys to have upward mobility. For this reason, the New England region -- which includes many small fishing communities -- is strongly opposed to a rationalized system (as are, incidentally, Sens. Olympia Snowe, R-Maine, and John Kerry, D-Mass., who are fighting language related to both quotas and catch limits in the bill).

Dave Benton, executive director of the Marine Conservation Alliance, a coalition of mostly Alaska-based fishing and seafood companies, says the rationalization system could be tweaked to level the playing field for the small and large players in the industry. Others are skeptical that such an effort would work.

Still, most environmentalists agree that a rationalized system has ecological advantages over the system now used in the Northeast, which doesn't cap the overall amount of fish that may be caught but, rather, the length of the fishing season -- making it very difficult to control the environmental practices of the industry.

"This system creates a mad dash to see who can pull the most fish out of the water the quickest," according to Benton. When operating under tight time constraints, fishing operations use less selective technologies that result in higher levels of by-catch -- unwanted fish species that are inadvertently caught along with the target species -- as well as greater impact on seabirds, whales and other ocean creatures, and on sea-bottom habitat.

"The advantage of a rationalized system -- where the limit is on quantity rather than time -- is that you can slow the fishing operation down, using technology that targets the desired fish species more precisely," says Festa.

The Alaska model also cuts down on the accidental harvest of unwanted fish by requiring that most fishing boats with quotas have third-party scientific observers on board who monitor catch levels and by-catch. This system is credited with helping Alaska's halibut, king crab, pollock and sable fish industries get their by-catch levels down to among the lowest in the United States. A recent study in the journal Fish and Fisheries highlights the importance of such efforts; it found that, on average in the U.S., over 1 million tons of unwanted fish is killed for every 4 million tons that is kept -- and those figures were even worse in the Northeast.

Stevens' bill would encourage more observers, though not mandate that they be aboard fishing vessels.

Environmentalists, of course, would like to see more mandatory requirements throughout the legislation, but making significant changes to the current version is likely to be an uphill battle. Stevens -- known as "the Hulk" on Capitol Hill -- has a reputation for being stubborn, and this eponymous coauthor of the original MSA is expected to exercise a tight grip on the language of his bill.

Still, enviros -- many of whom are concerned that even the Alaska model isn't strong enough -- will continue to press for the reauthorization bill to give science a stronger role in fisheries policy. At least this time Stevens and green groups are on the same page, which can't be said of their epic battle over oil drilling in the Arctic National Wildlife Refuge.