Diane Keaton, Sarah Jessica Parker, Dermot Mulroney and the rest of the cast rise above mediocrity in this innocuous family comedy. 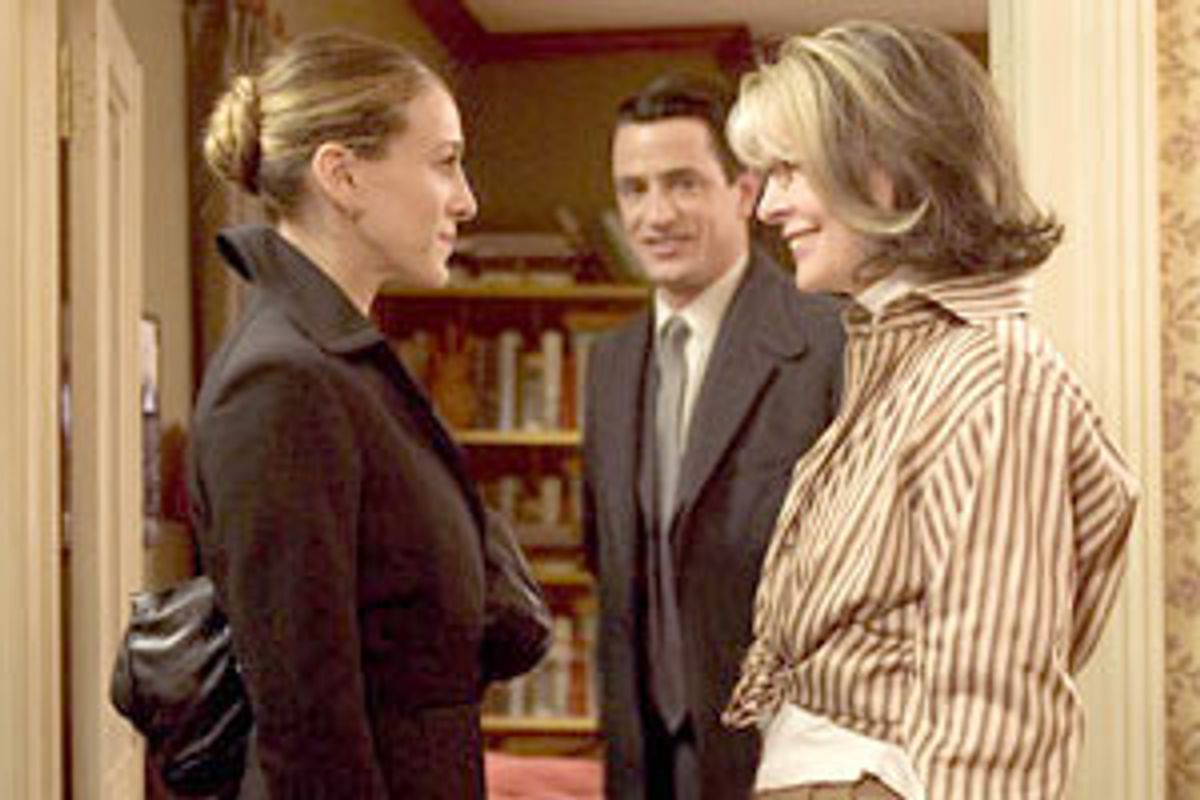 If there was ever a testament to the resilience of actors, in the face of a flawed script and wonky direction, "The Family Stone" is it. This is an essentially gentle family-conflict comedy with surprising flashes of bite: Diane Keaton is the matriarch, who knows she's dying of cancer but who hasn't yet found a way to tell her brood -- she's decided to wait until after Christmas, when the crew will gather at the Stone family's cozy New Englandy homestead, to lay the news on them. Her husband, played by Craig T. Nelson, honors her wishes by keeping mum, even though some of the five Stone kids have already intuited what's going on, and others have a subconscious inkling of the truth but can't bring themselves to face it.

And yet although Keaton's illness is a specter that hovers over the movie, changing its tone and colors here and there, it isn't -- thankfully -- the picture's dramatic fulcrum. That would be Sarah Jessica Parker, as the uptight, awkward girlfriend of Keaton's oldest, Dermot Mulroney. Mulroney is nuts about her (or so he thinks), and he's brought her home to meet the gang, which includes Rachel McAdams as the acerbic sibling who's kind to no one; Luke Wilson as the agreeable stoner who's kind to everyone; and Ty Giordano as the son who's gay and deaf and whose partner is a man of color (played by Brian J. White) -- every family's gotta have one.

But even though Giordano's character is encumbered with these paint-by-numbers attributes -- on paper, he certainly looks like the family's token triumph-over-adversity poster boy -- he still, remarkably, comes off as believable. And that's just part of the sly trickery that, with the help of his actors, writer-director Thomas Bezucha pulls off. (This is his second feature; the first was the indie picture "Big Eden.") There are places where Bezucha has written his characters to be so airtight they barely register as people. The Stones are one of those families who've set up very blurred boundaries, when they've set up any at all -- Mama Keaton openly refers to one young man in the neighborhood as the guy who popped her youngest daughter's cherry, and Papa Nelson and son Wilson have been known to sneak off for a clandestine toke or two. Together, the Stones laugh at and needle one another with obvious affection, but you sense undercurrents of resentment and disapproval, too.

Parker's character toddles into this very lively nest of chicks in her 4-inch heels and all-black city-girl outfits, with her prim, clipped enunciation and her (at first) vacant-looking blue eyes. You just know she's not going to fit in (and as it turns out, she has a more down-to-earth sister, played by the supernaturally luminous Claire Danes, who may be more Mulroney's type), but Bezucha insists on crayoning in the heavy-contrast anyway. Parker is made to look like a villain when one of the little Stone nieces breaks the heel off one of her fancy shoes; later, she sits at the dinner table and asks Keaton very adamantly if she wouldn't have preferred a "normal" son to a gay one.

Any character is going to look bad when you plunk her into situations like these. And Parker's character makes that ill-considered observation only after Keaton has said wistfully that she once wished that all her sons would be gay -- "That way they'd never leave me."

What is Keaton really saying here? That all gay men are essentially mama's boys? (Is that a particularly warm or enlightened thing to say?) And even though Parker is expressing herself badly, maybe all she really means is, Don't you ever worry about the specific problems a gay man has to face, things like the sheer amount of homophobic bullies in the world?

Bezucha didn't have to work so hard to make Parker's character seem like a pole-up-the-butt weirdo. Obviously, he wanted to amp up the volume on her clueless awkwardness, so he could turn the tables on us and make us realize, by the end, that we've judged her as unfairly as most of the Stones have. But Parker plays the role so that the clumsiness of the writing falls away: She's more natural here than she's been in years (particularly in her last few seasons of "Sex and the City," where her starletty affectation made her nearly unbearable). There are moments where we're allowed to see some of her old, gangly charm, the sort of unself-conscious loopiness that made her so terrific in pictures like "L.A. Story."

But then, nearly everyone is relaxed and likable in "The Family Stone": McAdams plays the kind of character you want to shake -- hard -- and yet somehow, she lets you see glimpses of the insecurity that makes her behavior so unbearable. Keaton and Nelson have some lovely moments together: Their relationship feels comfortable and worn-in; they're like two people who have decided to face the tough times ahead by taking more pleasure in each other rather than less.

There are a maddening number of places where Bezucha steers his story wrong: Do we really need a heart-tugging family montage intercut with Judy Garland's version of "Have Yourself a Merry Little Christmas" (from "Meet Me in St. Louis"), which is pure devastation by itself and shouldn't be abused for any filmmaker's purposes? But then, Bezucha will surprise you with other touches that are completely right: For example, every member of the family speaks and signs automatically if Giordano's character is in the room, and not just when he's being addressed directly. (Giordano, an appealing actor, is deaf in real life, but that doesn't guarantee the director will be as perceptive as Bezucha has been in directing the hearing actors around him.) In "The Family Stone," there's no room for exclusivity or special pleading. This is a family, and a movie, where everyone talks at once -- and more often than you'd think, its characters actually come up with something worth saying.