Watching Matthew Broderick and Nathan Lane's ultra-broad shtick is a little like watching a 3-D Imax film without the special glasses. 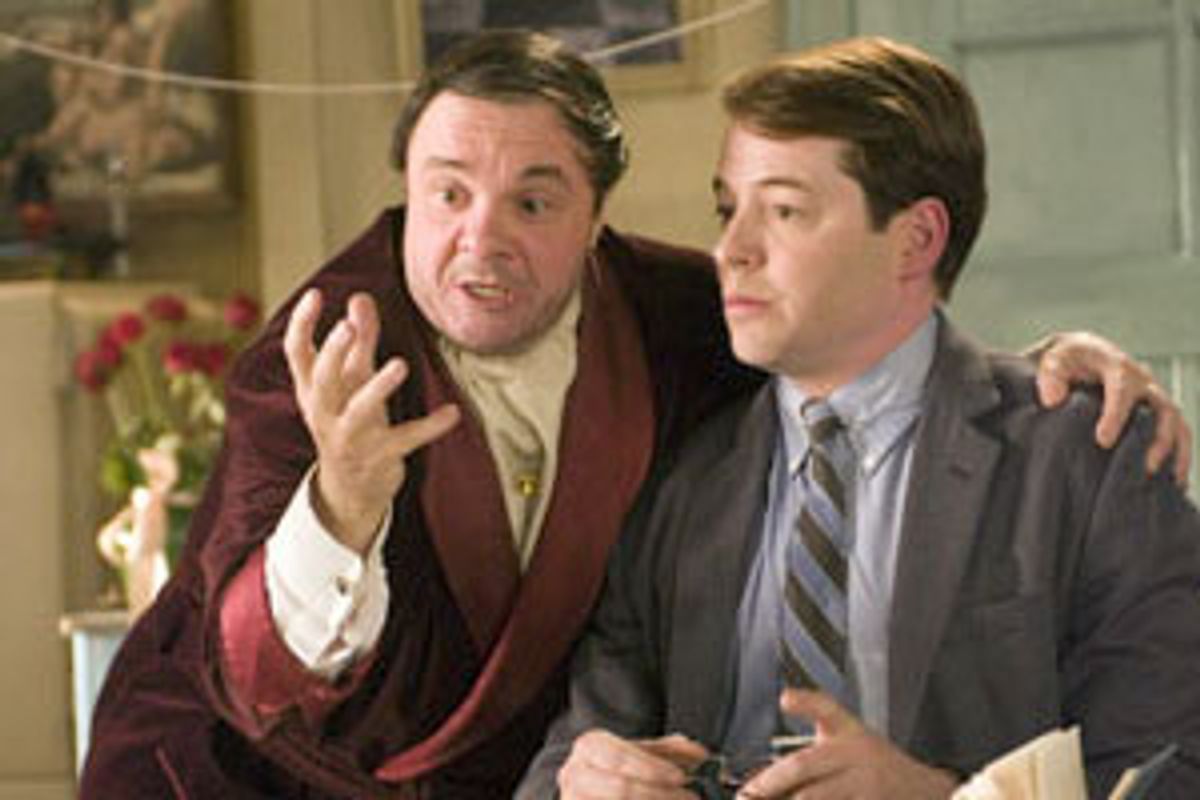 After Rob Marshall's shimmying, tinselly film version of "Chicago" became a hit, those of us who love movie musicals -- at least a certain kind of movie musical -- hoped that the form would experience a renaissance of sorts. Who did we think we were kidding? 2004 brought us the weird cardboard-and-sugar spectacle "Phantom of the Opera," which, horrible as it was, at least seemed like a minor nightmare from which the movie musical might yet recover.

But things have gone from verse to verser: Last month we got "Rent," a peppy little campfire-singalong about a group of New York boho types desperately trying to live for their art even as AIDS keeps bumming them out. And now we have "The Producers," which, even though it has the virtue of being based on good material, is as disappointing as any post-"Chicago" movie musical yet.

"The Producers" was directed by Susan Stroman, the Tony Award-winning director and choreographer who has never made a movie before. Watching it, I began to wonder if she'd even seen a movie before. "The Producers" is essentially a filmed version of a stage play, in which none of the characters' expressions or line readings have been scaled down to make sense on-screen. Every gesture is played out as if the actors were 20 feet (or more) away in real life, which means that, by the time the performers are magnified on the big screen, they're practically sitting in your lap. The effect is something like watching a 3-D Imax movie without the special glasses. When Matthew Broderick, as Leo Bloom, goggles at Uma Thurman's sexy-secretary Ulla, you not only see the whites of his eyes -- you feel them invading your personal space. At one point I thought Nathan Lane's Max Bialystock had sprayed me with spittle; thank God I was mistaken.

The movie's oversize scale works at cross-purposes with Mel Brooks' story, about a Broadway producer and an accountant who set out to get rich by staging a flop. (Their vehicle of choice: A musical called "Springtime for Hitler.") Part of Brooks' genius is the way he tosses out little bits of ridiculousness whose brilliance doesn't hit you until a few beats later. But there's no breathing space in this version of "The Producers" -- every line feels like a fastball. The musical numbers are assaultive without feeling lavish or exhilarating. And I'm still puzzling out how one of the big numbers, "Make It Gay" -- featuring an array of prancing, preening extras, as well as Roger Bart in a black turtleneck outfit laden with chains and pendant-style magnifying glasses -- is supposed to be anything other than homophobic, or at least just assertively clueless. I suppose this display is potentially defensible as a so-called celebration of stereotypes, but I'm not buying it.

Much of what Lane and Broderick do here must have worked nicely in live performance. (And Lane, with those Pagliacci eyebrows of his, is expressively big whether he's onstage or on-screen; here, he's slightly easier to take than Broderick is.)

But watching "The Producers" is simply exhausting. I counted numerous shots that were puzzlingly out-of-focus -- the movie has two experienced cinematographers (Charles Minsky and John Bailey), so it's hard to know who's to blame. Maybe worst of all, this is a movie that reduces the marvelous, too-little-seen Andrea Martin to a footnote: She appears fleetingly in one musical number, and since she gets a prominent screen credit, I assume she had some bigger scenes that were ultimately cut. But then, who in her right mind cuts Andrea Martin? "The Producers" is so aggressively fun that it never lets you forget what a bad time you're having. It's about as subtle as a crashing chandelier -- maybe less so.