To believe his various tales about his involvement in the Plame affair requires ignoring some glaring facts. 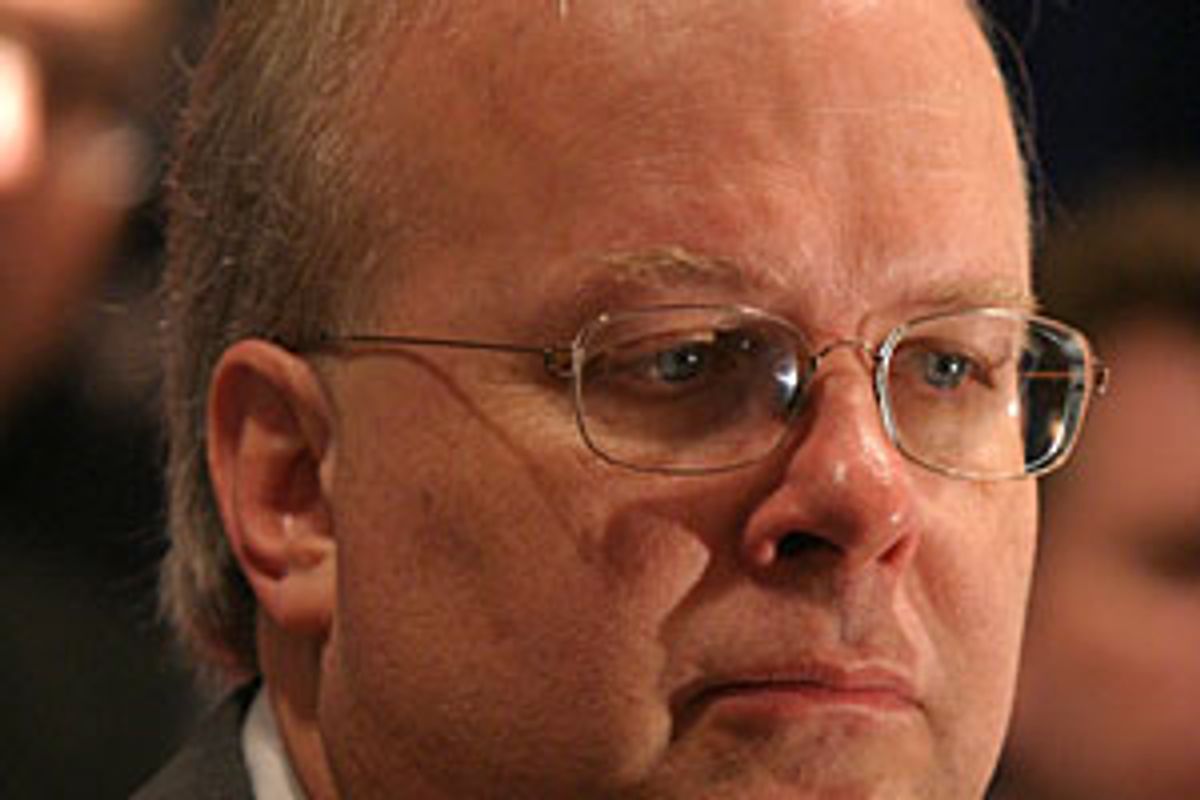 Stripped of deniability in the CIA leak investigation, the Bush White House now must confront the increasing possibility that the president's top political advisor will be indicted sometime soon for testifying falsely about his role in that affair.

The notion that Karl Rove would escape all responsibility for outing Valerie Plame's CIA identity -- and then lying brazenly about his actions -- always deserved to be treated with skepticism. Following the indictment of I. Lewis "Scooter" Libby, Rove's public relations apparatus accelerated the spinning of the national press corps with claims of innocence -- or if not innocence, then at least immunity from successful prosecution.

He hadn't lied. He had just forgotten. Who can remember every little phone conversation six months later?

For journalists with their own impaired attention spans and short memories, the Rove version may sound credible. In his initial testimony about his role in Plame's exposure, Rove had omitted mention of his July 2003 conversation with Time reporter Matthew Cooper about Plame and her husband, ambassador Joseph Wilson. But that false testimony had resulted from his failure to recall a brief and insignificant telephone chat and not from intentional mendacity.

By October 2004, when he revised his flawed testimony in the grand jury, his recollection had improved, evidently thanks to a suggestive conversation between his defense lawyer, Robert Luskin, and Cooper's Time colleague Viveca Novak. As Novak recently explained, she had indicated to Luskin, in a meeting over drinks sometime between January and May 2004, that Cooper was saying he had spoken with Rove about Plame. Luskin and other defense sources have suggested that this alarming news prompted Rove to search his e-mail, where he found a contemporaneous message he had sent to Stephen Hadley in July 2003, then the deputy national security advisor, about his chat with Cooper.

Should Fitzgerald accept the Rove version and forgo indictment? There are reasons to think he won't, aside from the fact that he has activated a new grand jury, to which he has reportedly been presenting both old and new evidence. To believe Rove means ignoring certain glaring facts.

As noted in this space before, the first FBI interrogations of Libby, Rove and other administration figures took place in the fall of 2003, only a few months after the initial revelation of Plame's identity.

At that point, the leak investigation demanded by the CIA was still under the control of then Attorney General John Ashcroft, from whom the potential targets such as Rove may well have felt they had nothing to fear. They had no way to know that by December, Ashcroft would be forced to recuse himself from the case, leading to the appointment of the ferocious Fitzgerald.

It is a felony to make a false statement to the FBI, which Rove very clearly did when he failed to mention his conversation with Cooper. His alibi is that he had forgotten that chat, an excuse that scarcely seems plausible so soon after it occurred, particularly because Cooper had written a cover story about the Plame affair. And Rove apparently testified falsely again in February 2004, when he made his first of four appearances before Fitzgerald's grand jury. He apparently didn't change his story until October 2004 -- between five and 10 months after Luskin was tipped to Cooper's possible testimony by Novak.

In the meantime, Rove quite consciously allowed White House press secretary Scott McClellan to mislead the press and public by denying that he had played any part in revealing Plame's identity. (Clearly he must have lied to McClellan's face about his involvement around that time.)

Now, as a legal matter, a witness can testify wrongly and then amend that testimony later, without incurring the penalties for false statement or perjury. But that remedy is not available to a witness who has testified falsely -- and who then acquires "guilty" knowledge of facts or testimony that may contradict him.

In other words, if Rove lied twice, then learned from Viveca Novak that Cooper would contradict him, and as a result changed his testimony to correct the lie, that wouldn't help him -- and might conceivably be considered as evidence against him.

Indeed, Luskin's Novak gambit opens additional avenues of inquiry that hardly exculpate Rove. Is it plausible to think that Rove, with all the resources of the White House at his disposal, would have been unable to discover that incriminating e-mail for so many months? Why did he delay for so long in amending his testimony? And why did his attorney wait for an additional 12 months to offer his explanation of what had happened with Novak?

The fate of the man known as the "Boy Genius" rests upon whether Fitzgerald and the new grand jury believe that he merely forgot the Cooper conversation -- and whether they can ignore the questions that his latest tale leaves unanswered.