Don't look now, but greens are warming up to coal as part of America's clean-energy future. 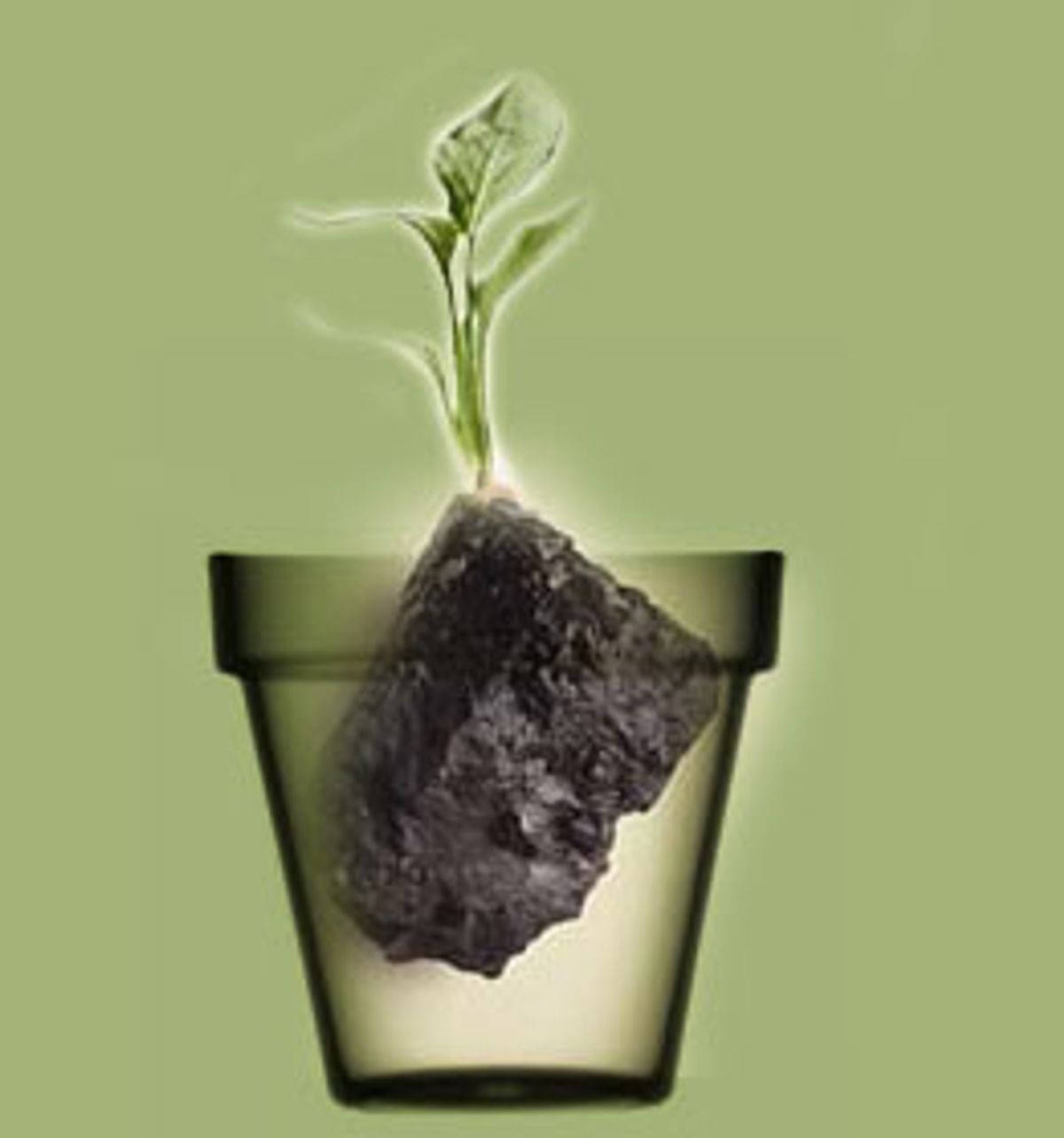 Bush administration officials tried their darnedest to derail the international climate-change negotiations that wrapped up in Montreal last week. But in the midst of their bombastic no-no-no-ing, they did offer up one constructive idea -- a $950 million partnership between the U.S. Department of Energy and industry leaders to build FutureGen, a "prototype of the fossil-fueled power plant of the future." Perhaps they hope the idea will help redeem their negative image.

"It was an inappropriate attempt at distraction," said Greenpeace energy policy specialist John Coequyt, who attended the Montreal talks, "while [Bush reps] squirmed under pressure from other industrialized countries to provide evidence of some kind of a meaningful or concrete strategy related to climate."

Oh, and it wasn't a new idea, either.

The FutureGen project was first proposed in 2003. The new development being touted this month is simply that the Bushies have brought aboard partners from the energy sector, including American Electric Power, Southern Company and Foundation Coal, which will collectively contribute $250 million to the project. The bulk of the $620 million that the DOE plans to pony up on its own was allotted in the energy bill that passed this past August. The feds hope to get the rest of the needed money from other energy R&D funds and an unnamed group of "international partners."

FutureGen aims to build a soup-to-nuts demonstration facility that would generate virtually zero-emission (yes, zero emission!) electricity from coal -- billed by industry as "clean coal" -- within the next decade. It would use "integrated gasification combined-cycle" (IGCC) power plant technology, which first pressurizes coal to produce a vapor, then filters carbon dioxide and smog-causing pollutants from the gas before burning it. The captured greenhouse gases would then be stored underground, where they couldn't contribute to atmospheric warming -- a technique known as "sequestration."

"FutureGen would be the first demonstration plant in the world to combine the coal gasification process with carbon capture and sequestration," DOE spokesperson Drew Malcomb told Muckraker.

It's a far cry from a commitment to reduce greenhouse-gas emissions. Still, on the face of it, FutureGen sounds pretty good.

In recent years, the IGCC concept has garnered support from an increasing number of environmental advocates, who prefer to call it "advanced" or "cleaner" coal. These folks say coal can't realistically be phased out within the next couple of decades, so we should be using it more efficiently and cleanly while we make the transition to renewable energy sources. And they say carbon sequestration could play a key role in making coal more palatable.

Like it or not, a future without coal is politically implausible in the near term, says David Hawkins, director of the climate program at the Natural Resources Defense Council: "While as a technical matter we could run the world's economy without coal, as a political matter it is not going to happen fast enough. The fuel's abundance and low cost make it something that most political leaders are unwilling to give up."

About 50 percent of the electricity in the United States is coal powered, and coal is the top power source in many fast-developing countries. "We must do everything we can to accelerate our use of renewables, but the renewable-energy future is far too slow in coming to put all our eggs in that basket," Hawkins argues. "We have to start reducing greenhouse gases before we phase out fossil fuels."

Coequyt of Greenpeace is far more critical. He's concerned that unresolved questions about sequestration -- including possible leakage from storage reservoirs and acidification of underground water supplies -- are getting lost in all the boosterism.

There's also the reality that coal -- whether burned in dirty old plants or gasified in high-tech new ones -- is generally extracted using environmentally harmful methods. "Let's not forget that when you're talking about coal you're talking about mountaintop mining," says Coequyt. He cautions that environmentalists who support advanced coal "need to clarify their message, because otherwise they are implicitly supporting things they don't really condone."

These concerns are shared by many. Nonetheless, carbon sequestration is getting a lot of attention these days from folks who take the climate challenge seriously.

The concept was talked up heavily in Montreal, according to Coequyt. "The emphasis on coal and carbon storage was far more pronounced than the emphasis on solar, wind and other renewables," he says. "It was all over the place."

Some of that interest was driven by a report on carbon-dioxide capture and storage released two weeks prior to the Montreal conference by the Intergovernmental Panel on Climate Change. (This is the same esteemed group that released a widely cited 2001 report stating the consensus of some 2,000 climate scientists that much of global warming is attributable to human activities.) The new report is a whirlwind tour of potential methods for siphoning carbon from fossil-fuel energy sources and stowing it underground or in the oceans.

The Panel on Climate Change "has brought a credibility to the steadily growing awareness that advanced coal and carbon sequestration need to be taken seriously," said Jeff Fiedler, a policy specialist with the Climate Center at the NRDC, the green group that has been more outspoken than any other in its support for advanced coal.

The report was not necessarily a green light, though, Fiedler cautions: "It does raise unresolved technical, economic, and policy-related questions about the technology's viability, but still confirms its potential to be a key component of climate strategy."

Among the members of the review panel for the report was the NRDC's Hawkins. He was particularly impressed by data regarding the total capacity of underground reservoirs worldwide that could be used for carbon sequestration -- porous rock into which carbon dioxide could be injected. "The findings show that you could take a very large chunk of the world's carbon-dioxide output for the next 100, possibly even 200, years and stow it in these reservoirs," explains Hawkins. "It allows the [sequestration] tool to be a significant player in the effort to cut global warming. Perhaps it could handle as much as a third of the reduction task, but meanwhile we need to work just as hard or harder on the other tools: efficiency and renewables."

On the day of the FutureGen announcement, the BBC reported that the U.K.'s top science advisor, Sir David King -- a veritable Paul Revere of climate science -- expressed unqualified support for carbon capture and sequestration, saying it's the only way to offset the inevitable surge in coal burning in China and India. These two major emerging economies have copious coal supplies and are currently building, on average, at least one major coal-fired power plant every two weeks, according to Hawkins.

While experts in a growing number of green groups -- such as the NRDC, the World Resources Institute and the Sierra Club -- are opening up to the idea of advanced coal and carbon sequestration, that still doesn't translate into an endorsement of the Bush administration's FutureGen project. Many U.S. activists see it as a costly and slow-moving P.R. gambit rather than a straightforward bid to advance cleaner energy production.

"FutureGen is to advanced coal what the FreedomCAR is to hydrogen," says the NRDC's Fiedler, "a fancy demonstration project that amounts to a lot of long-term envisioning and little near-term action."

Instead of lavishing nearly a billion dollars on a full-scale prototype with a projected completion date of 2012, Fiedler argues that the funds would be better spent on research into sequestration technology, which is still in an early stage of development. "Coal gasification is not the technical challenge right now. There are vendors who will sell you that technology tomorrow. What we don't know is how to make the carbon capture and storage part work," he says.

According to the DOE's Malcolm, the department has devoted $178 million to carbon-sequestration R&D since 2001, and President Bush has requested an additional $67 million for 2006. Still, critics say, little of this has been spent on the kind of demonstration projects that are necessary to prove the technology.

"Rather than do one full-scale facility" with the FutureGen funds, argues Fiedler, "the DOE should be doing five demonstrations of carbon capture and storage using existing streams of carbon dioxide."

Indeed, the clock is ticking on advanced-coal and carbon-capture technology -- more so than on other potential climate solutions given the alarming rate at which coal plants are being built in the developing world. But there's still time to preempt the potential damage: According to Fiedler, of the thousands of coal plants that are projected to come online worldwide between now and 2030, two-thirds have yet to be built.

By the time 2012 -- the presumed completion of the FutureGen project -- rolls around, however, much of this damage will be done. Says Fiedler, "If the Bush administration is serious about proving this technology, they either need to do it now or not bother."