It's heartwarming! It's romantic! Poor Jane Austen must be rolling in her grave over the new film of her great novel. 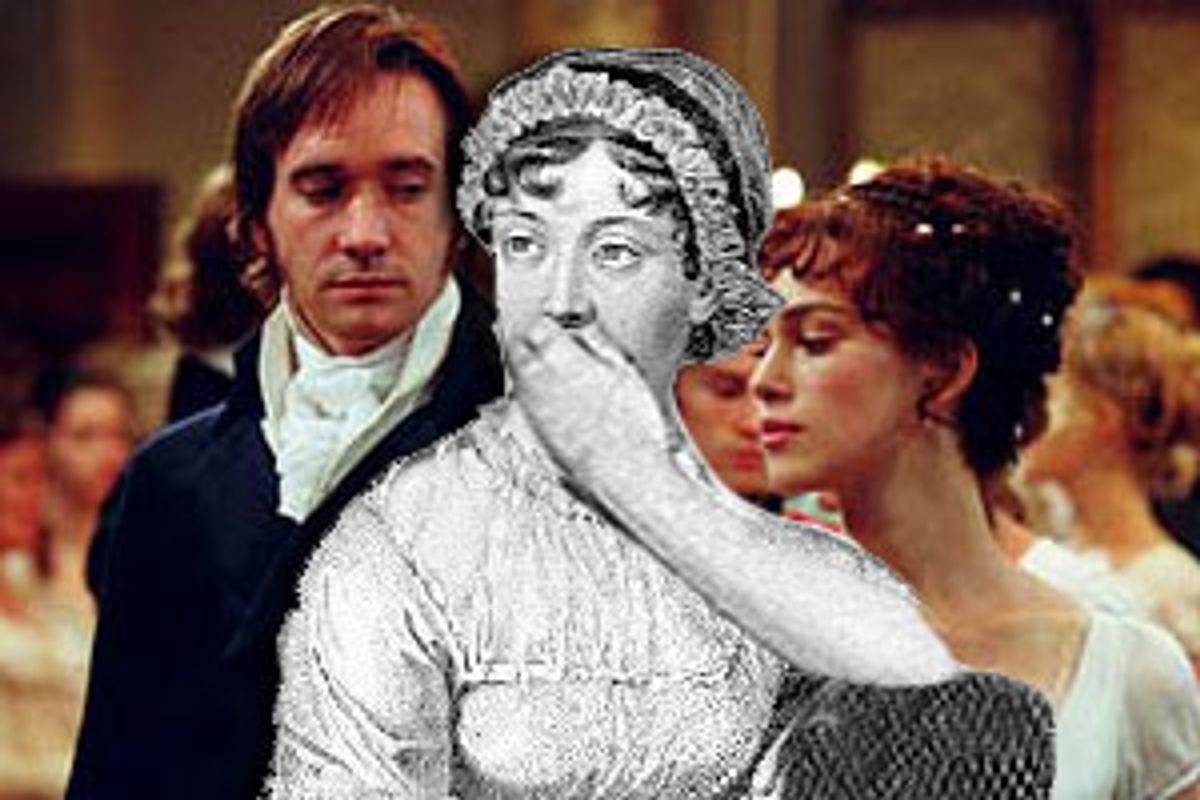 You know that part in "When Harry Met Sally..." where Carrie Fisher's character is talking about the wagon-wheel coffee table, and she says, "It's so awful I can't even begin to explain what's so awful about it"? That's exactly how I felt after seeing the new film version of "Pride and Prejudice."

So I tried to let it go. I tried not to think about it. Mostly because I knew anything I said (or, still worse, wrote) would invariably be interpreted as the ramblings of a crazed Jane Austen-loving spinster, and I didn't want to put myself out there as one of those bookish Austen-ites who gets all nutty about things like, Why in God's name do all the people stop dancing when Mr. Darcy walks into the room? or Tell me again why Lady Catherine is paying a social call in the middle of the night. These are not actual quotes, mind you. Just little thoughts that may or may not have occurred to me as I fidgeted and stewed, praying for the film to be over as quickly as possible so I could go home and start rereading the book.

Yet critics love it. It's heartwarming! It's romantic! Roger Ebert's heart leapt. Stephen Holden of the New York Times said, "It makes you believe in true love, the union of soul mates, happily-ever-after and all the other stuff a romantic comedy promises but so seldom delivers." And audiences agree! One of my very best friends confessed to being so moved he stayed in his seat and wept for 20 minutes after the movie was over. And maybe that right there is how I can at least begin to explain what's so wrong with it.

Jane Austen wasn't trying to make you cry. Or believe in true love. Or soul mates. Or even in happily ever after. She was trying to make you laugh. To sit up and take notice of the staggering amount of human idiocy that surrounds you on a daily basis. To subvert the stilted and pat nature of all the weepy, sentimentalized 18th century novels that had come before her. And most important, to undercut and deflate at nearly every turn the idea -- heck, the mere suggestion -- of "romance" in all its most hackneyed forms.

There, I've said it. But I can see you don't believe me. You've seen the commercials. The pre-dawn traipsing across the moors, the erotically messed-up hair, the lustiness of the country dancing. Clearly, this is a story about Love with a capital L -- ungovernable, unregulated. The kind of passion -- at least in movies -- that can only be professed in the rain. And, of course, in this swirling, overwrought version of Austen's classic tale -- written by Deborah Moggach and directed by Joe Wright -- it is. Professed in the rain, that is, as Elizabeth Bennet (Keira Knightley) and Mr. Darcy (Matthew MacFadyen) take refuge from a thunderstorm in the shadow of some imposing Masonic-temple-like structure that just happens to be conveniently located in the middle of the greenest and mistiest meadow this side of Hobbiton.

And this is where I get into trouble. Because if I stop here to point out that in the book, Mr. Darcy tells Elizabeth that he ardently admires and loves her within the confines of a snug drawing room, we start to enter crazed, Jane-ite spinster territory. Face it. If you are a single woman of a certain age, you can either be obsessed with Jane Austen or you can have cats. You cannot do both, and a long, long time ago I chose Jane. I haven't just read the books and reread them. I've been to her house at Chawton. I've seen her grave at Winchester Cathedral (which, for the record, is the only time Jane Austen ever made me cry). I've even walked around Bath with a copy of "Persuasion" trying to figure out exactly where Anne Elliot is standing when she first catches sight of Capt. Wentworth on Milsom Street.

All of which renders me uniquely unqualified to have any sort of opinion on this movie. Because really ... if the whole thing functions as a satisfying piece of entertainment, why quibble about such tiny little deviations from the book? The sentiments Darcy and Elizabeth express out there in the rain -- while looking just as waterlogged as Hugh Grant and Andie MacDowell at the end of "Four Weddings and a Funeral" -- are essentially what Jane Austen wrote in the novel. And people like it! Which means they like Jane Austen. So what if it's outside? Conventional Hollywood wisdom dictates that it's usually better to open up these stilted drawing room productions for cinematic purposes. We get outside, we get a little fresh air. If we're bored, we can look at the scenery. What's the harm?

The harm is that trapping would-be lovers in a thunderstorm was already a horrifically trite and clichéd romantic convention circa 1796, when Jane Austen first began writing the novel that would become "Pride and Prejudice." In fact, just such a rain-soaked encounter is one of the more famous scenes in Fanny Burney's 1782 novel "Cecilia," which Austen had certainly read, since its last chapter is the source of the phrase "pride and prejudice." And of course it actually is raining in "Sense and Sensibility" when Marianne twists her ankle on a steep hill and has to be lifted up and carried home by the "uncommonly handsome" Mr. Willoughby.

My point is that Jane Austen understood these romantic conventions, how they worked on people, what they implied. If she'd wanted to go there, she could have. She chose not to. And that's where the genius lies, in what the critic Terry Castle has called "the implacable anti-romanticism of her vision." That's what makes "Pride and Prejudice" endure -- what makes it more than just your average, run-of-the-mill, bodice-ripping fairy tale about soul mates and true love conquering all. "Jane Austen kept to her compact," Virginia Woolf once wrote. "She never trespassed beyond her boundaries. Never, even at the emotional age of fifteen, did she ... obliterate a sarcasm in a spasm of compassion, or blur an outline in a mist of rhapsody. Spasms and rhapsodies, she seems to have said, pointing with her stick, end there; and the boundary line is perfectly distinct."

The current film version, of course, captures none of this distinction. It's all spasms and rhapsodies. But since it's so "alive," "whirling," "voluptuous," "intoxicating" and "delirious" no one seems to care that it's not ..... well, it's not exactly Jane Austen. (OK, no one except Anthony Lane, who took pains in his New Yorker review to highlight the many ways in which the filmmakers had "Brontëified" Austen past the point of recognition.) "Reader, I married him" is the first line of the last chapter of "Jane Eyre," another 19th century novel whose basic plot echoes a Cinderella story. You know how the last chapter of "Pride and Prejudice" starts? "Happy for all her maternal feelings was the day on which Mrs. Bennet got rid of her two most deserving daughters." And that is Austen in a nutshell: gloriously, resolutely unsentimental.

So go ahead -- make a movie that affirms audiences' faith in soul mates and happily ever after and moves grown men to tears. That's fine. Just don't call it Jane Austen.

Gina Fattore is a television writer/producer whose credits include "King of the Hill," "Dawson's Creek" and "Reunion."