This frivolous, fluffy farce about the famed sensualist is one of the few wholly enjoyable releases of the Christmas season. 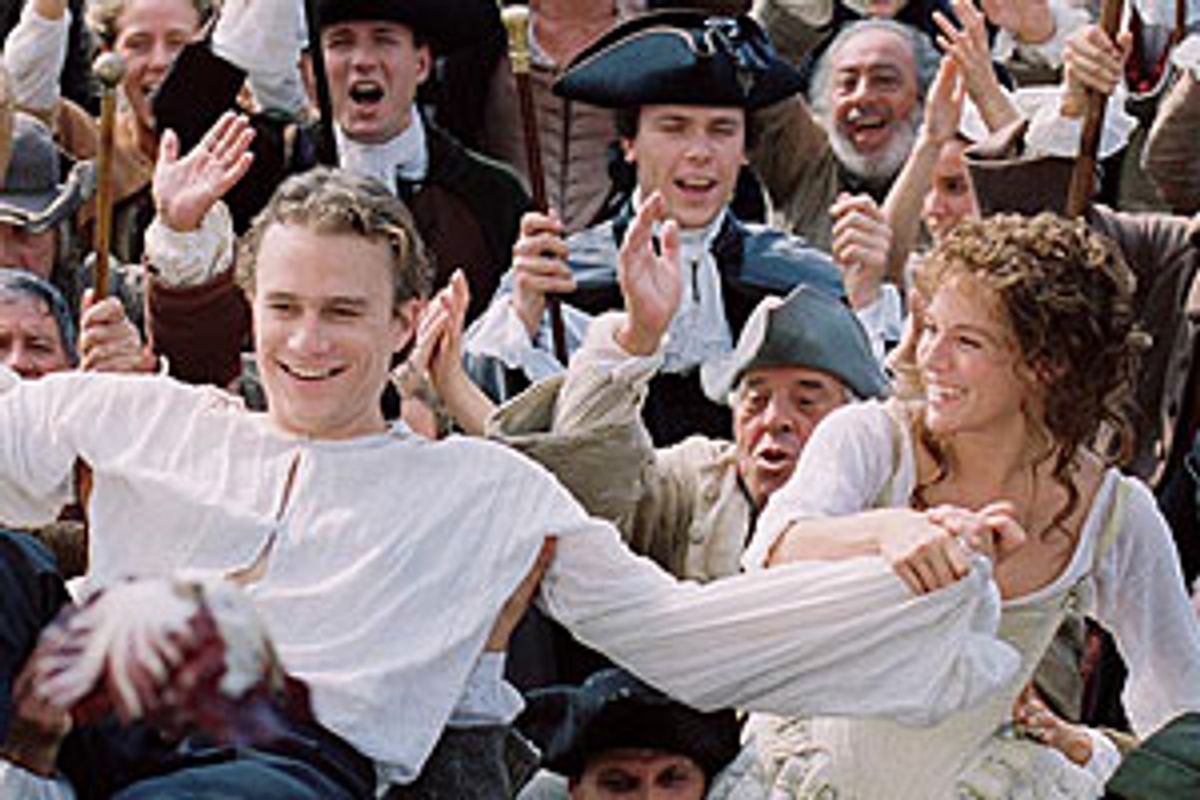 The accounts of Casanova's assignations and escapes, both in his memoirs and in what other writers have imagined for him, have all the juicy makings of farce. So it's no surprise that Lasse Halström's "Casanova" taps that potential, taking the finicky trappings of costume movies and plaiting them into a light, frivolously ruffled comedy of mistaken identity, one that riffs on the unpredictable nature of sexual attraction. Among the least-heralded of the Christmas releases, "Casanova" is one of the few that's wholly enjoyable. This is a carefully constructed work of unrepentant silliness -- and I thought so well before Jeremy Irons flounced onto the scene as the uptight inquisitor Pucci, wearing a black leather cape lined in ecclesiastical purple. Yum!

"Casanova" has little or nothing to do with the real Casanova, so if you're looking for a detailed explication of the famed sensualist's 12-volume memoirs, please steer your gondola elsewhere. (Try Lydia Flem's 1997 "Casanova: The Man Who Really Loved Women," a shrewd and marvelous precis of Casanova's opus.) This "Casanova" -- its script is by Jeffrey Hatcher, who wrote last year's marvelous gender-twisting theatrical comedy "Stage Beauty," and Kimberly Simi -- is set in Venice, circa 1753. We know exactly what we're in for early in the picture, when a character warns Giacomo C. (played by Heath Ledger, with flowing tresses and a mischievous glint in his eye), "Casanova, the Inquisition is here looking for you."

Ah, the words every respectable libertine dreads hearing. When Casanova gets that news, he's in the midst of seducing a succulent young newbie at the local convent. (Later, when an official charges him with fornication with a novice, he shoots back, "She's hardly a novice!") He beats a hasty retreat from the nunnery, scrambling over several colorful Venetian rooftops before ending up at the window of a nearby university, where he gets his first glimpse of the lovely and bodaciously intelligent Francesca Bruni (Sienna Miller). She's disguised as a man (no woman is allowed to study at this august institution of higher learning), and is just about to wow the crowd with her true identity. Casanova is, of course, destined to fall for her, but she's already engaged to Lord Papprizzio (Oliver Platt), the Genoan "Lard King," whom she's never met. And Casanova is about to learn that he must marry or face expulsion from Venice, which leads him to pursue a petite, virginal beauty named Victoria (the wonderful Natalie Dormer, whose upturned nubbin of a nose suggests a flapper as painted by Fragonard). Victoria may look innocent, but her pent-up sexual desire is so potent that it causes her to, Hulk-like, accidentally break the bars of the little gilt cage in which she keeps her pet doves.

Nothing in Halström's last picture, the sturdy but dull barn-door drama "An Unfinished Life," could have prepared us for such blithe, pleasurable folderol. "Casanova" shows an incredibly light touch even as it sticks, with a fair amount of discipline, to classic farce structure. (Although its tone is raucous, it somewhat resembles Clare Peploe's lovely 2001 Marivaux rhapsody "The Triumph of Love.") Halström gives us some lovely sight gags, including one in which the robust Papprizzio turns a gondola into a kind of vertical canoe, one of the funniest movie phallic symbols ever. "Casanova" is fearless in its pursuit of fun and pleasure; it's like a banquet at which no one is worried about overeating or overimbibing.

Ledger's low-key wit works well here, although Miller, pretty as she is, doesn't have quite as much spark as her character demands. Omid Djalili, as Casanova's faithful valet, gives a performance that's a model of elegant loopiness. And Lena Olin, as Francesca's mother, has some terrific scenes with Platt, who's never been better. He begins as a purely comical figure and ends up sexy-funny in the best way, a nicely padded pasha of sensuality. And then, of course, there's Irons, in that crazy half-Zorro, half-chorus-girl getup. He scowls and prowls through the movie like a cartoon Boris Karloff -- we rarely get to see Irons having so much fun. "Casanova" works because it gives in to its nuttier impulses instead of fighting them. It's an absurdly joyous bit of fluff.