This drizzly dramatic thriller may be a return to form for Woody Allen, but is it a form worth returning to? 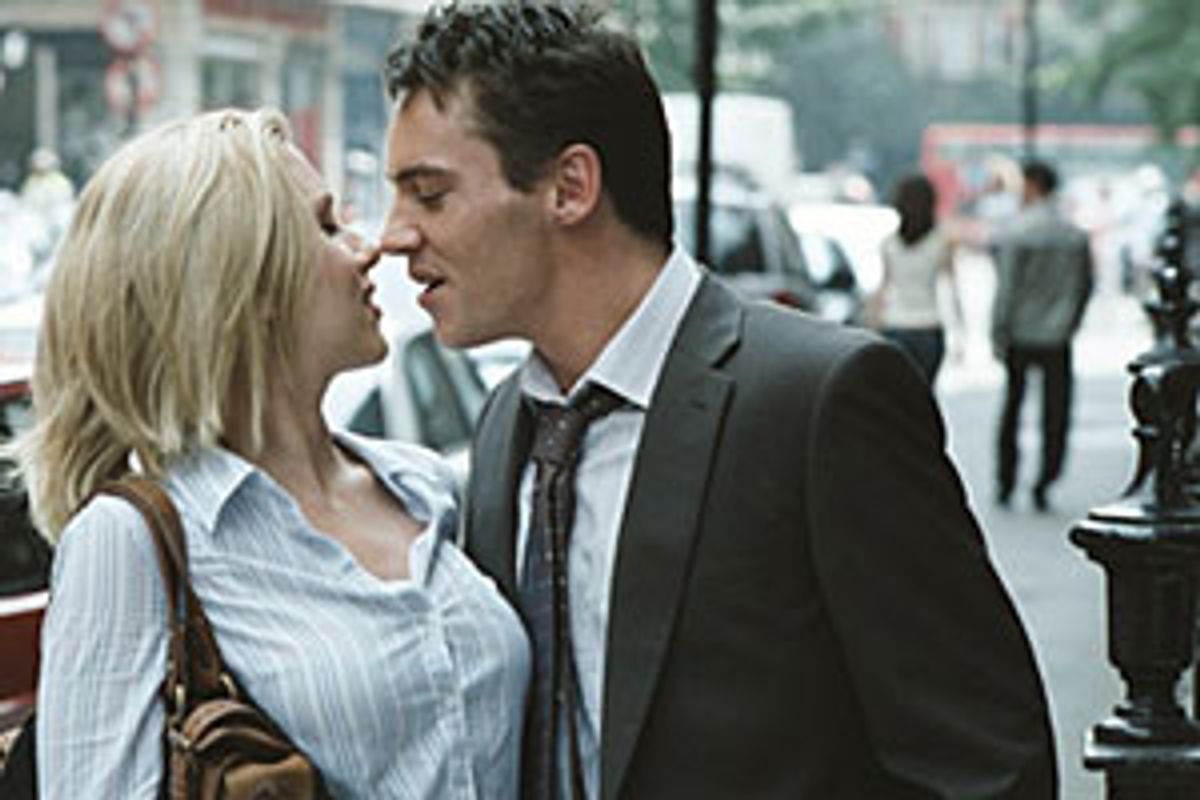 "Match Point" is being heralded as a return to form for Woody Allen, which means anyone who doesn't like it is likely to be accused of not bowing low enough at the altar. And the picture is crisply made, at least for the first 45 minutes or so: This is a drizzly dramatic thriller set in London -- as opposed to Allen's usual favorite setting, New York City -- and its structure shimmers with a kind of dark, gunmetal elegance. The movie's meticulous construction alone is something of a relief, considering the half-asleep sloppiness of Allen's recent comedies: Few people, even die-hard fans, were able to muster much enthusiasm for stale Raisinettes like "Hollywood Ending" and "Melinda and Melinda." And "Match Point" -- which bears some resemblance to "Crimes and Misdemeanors," in that both are obsessed with those twin serpent heads, adultery and murder -- has a sheen of seriousness to it. Next to the Bert's Beanery quality of, say, "Small Time Crooks" (worth seeing for the great Elaine May only), it makes for a classy take-in.

But while "Match Point," which opens Dec. 28, may be a return to form for Allen, is it really a form worth returning to? The movie is a window into the lives of the rich and tastefully color-coordinated, seen from the point of view of the less-privileged guy who wants in: Jonathan Rhys-Meyers plays Chris, a tennis pro who's tired of the circuit and has decided to take a job at an upscale club. There he meets and befriends the upper-crusty Tom (Matthew Goode). He strikes up a romance with Tom's sister, Chloe (the always lovely, and here, misused, Emily Mortimer), but also finds himself dangerously attracted to Tom's fiancée, the American femme-fatale actress-wannabe Nola (Scarlett Johansson).

That means serious trouble for gold-digger Chris. Will his attraction to the shameless blond hussy -- he's something of a shameless blond hussy himself -- cause him to go over to the dark side? What do you think? To say much more about the plot of "Match Point" would give the game away. (I was appalled to see that the trailer for the movie is an outright condensation of the picture. Do the people who make these things believe that audiences who go to see Woody Allen movies don't care about piddling pedestrian concerns, such as having a movie's plot be an actual surprise.) But its twists notwithstanding, from the casting to the dialogue, "Match Point" just feels pickled in artificiality. Rhys-Meyers is attractive but flat; he has the bland glow of an underwear model. And no matter what character he plays, or who that character is sleeping with, Rhys-Meyers has made homoerotic undertones his specialty. He can be touching, as he was in Mike Hodges' "I'll Sleep When I'm Dead." In "Match Point," he's a fashion-model Tom Ripley.

Chris' lovemaking with Chloe is supposed to be lacking in passion, and with Nola, he's supposed to sizzle. To that end, the two hungrily clutch and snuffle at each other in a field during a rainstorm (Nola's blouse becomes saucily wet), which is about as close as Allen can come to putting hot sex on the screen. I think I may have seen something like this in a Candida Royalle video once, and I didn't like it much there, either.

It needs to be mentioned, though, that Johansson -- even though her character is made out to be more and more a nagging, whining bitch as the movie progresses; she's Shelley Winters in "A Place in the Sun," without any of the compassion shown that character -- survives the picture unscathed. It astonishes me that so many actresses still clamor to be in Allen's films, considering that for many years now -- possibly several decades -- he's had next to no feeling for women when it comes to either writing for them or directing them. Allen is obsessed with home-wrecker types, women so alluring that they exist only to muck up a guy's best-laid plans for having a normal life. And although that's what Johansson plays here, she manages to reach beyond the shallowness of the writing and come up with a fully rounded character.

Ever since "Match Point" debuted at Cannes this past May, critics, while praising it as a return to form, have touted it as a departure for Woody Allen: Not only is it set in London, but its soundtrack features scratchy old opera recordings instead of scratchy old jazz recordings. Apparently, that's a signal that Allen has progressed to a new level of sophistication. And even though we always knew that deep down Allen has always wanted to be the guy in the tennis whites sipping Perrier, this movie confirms it. But that doesn't make "Match Point" particularly revelatory or honest. It's a picture made by a boy with his nose pressed against the window, as opposed to a man wrestling with any genuine feeling. You can hear it in the dialogue: Chloe and Tom's cocktail-swizzling mother (Penelope Wilton, rounding out the film's trifecta of demeaning roles for good actresses) doesn't much care for Chris, but dad (Brian Cox), a good-natured sort, seems to think he's OK: Defending the lad, he says, "We had a very interesting conversation about Dostoevski," which, when you write it down, sounds like a line from "Love and Death," although it's meant in complete seriousness.

I've always felt that Allen's comedies -- the good ones -- have a more complex view of the nature of tragedy than his so-called serious movies do. A friend of mine had an uncle who'd lost most of his family to the concentration camps. Whenever he was troubled by some minor affliction -- a hangnail, for instance -- he'd say, "First the Holocaust, and now this!" And that, to me, was the spirit of Woody Allen. As a comic figure, his inability to keep his own suffering in perspective -- and the way he made a joke of that inability -- wasn't selfishness, but a way of connecting with the world. Each of us knows that we can't be the center of the universe, but naturally, each of us wants to be the center of our own universe. Allen's neurotic conflation of the two has often been so recognizably human that it's almost painful -- in other words, so funny that it hurts.

And maybe that's why "Match Point," a movie made by a poor little rich boy who's perpetually on the outside looking in, gazing forlornly at this privileged world to which he's always wanted to belong, is so phony. "Match Point" is a fatally neat exercise in detached craftsmanship, and maybe that's the best we can expect from Allen at this point. If so, then all we can do is weep at the tragedy of his hangnail.