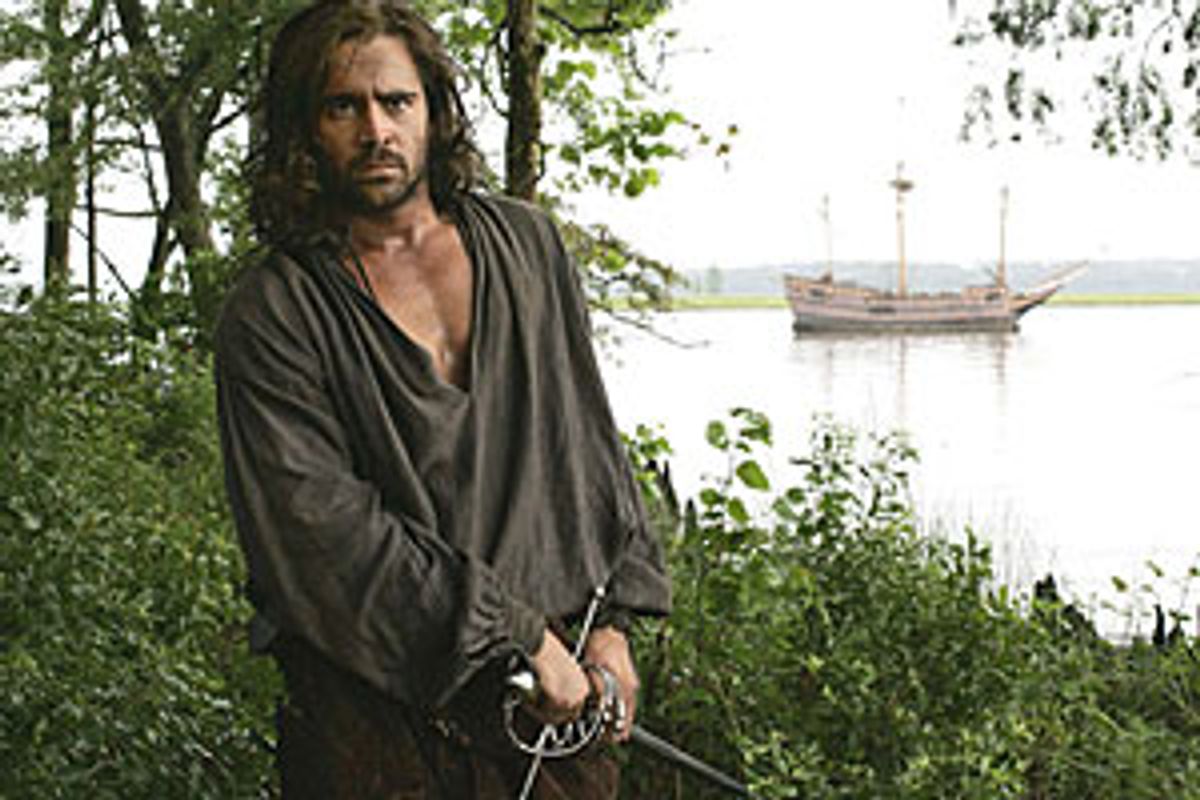 Terrence Malick may not care much for people, but he never met a tree he didn't like. "The New World" is a story told in a pantomime of camera angles, in extended long shots of geese flying in formations of tiny dots, in lingering meditations on the way the sun has a tendency to twinkle through leafy tree branches. Occasionally, in this inspired-by-history tale set in early 17th century Virginia, a human being drifts by, often with uncombed hair and covered in dirt and boils. (Jamestown in 1607 was not a pretty place.) The more fortunate actors are somewhat better groomed and get to make cogent observations in voice-over ("It was a dream. Now I am awake"), many of which are accompanied by lovingly composed camera shots, of sunlight dancing on water ripples or a skinny dog rooting around in the dirt. "The New World" is a story told largely in pictures, and sometimes, they even move.

Malick is often accused of being a genius, and his reputation hovers around him like a noxious cloud: In the galaxy of esteemed filmmakers, he's one gassy planet. Even people who generally don't like his work -- what little there is of it -- will defend "Badlands" as a "good" movie, perhaps mistaking Malick's youthful posturing for a point of view. (Though I wonder how anyone who has ever listened to Bruce Springsteen's "Nebraska" can take "Badlands" seriously.)

Malick's movies are often pretty to look at, and "The New World" is no exception -- it was shot by Emmanuel Lubezki, and if I'm going to be stuck looking at anyone's geese for two and a half hours, I want them to be his. And yet the picture is just so much atmospheric tootle: The camera gazes, glassy-eyed, at the splendor of nature, as if it can't believe what it's seeing. Meanwhile, the characters, like tiny figures in the movie's background, do everything but jump up and down and wave, castaways waiting for the lens to pick them up. Malick may have an Eagle Scout's respect for nature, but his idea of using actors in a movie is straight out of "Where's Waldo?"

"The New World" is a love story, a triangular one: Malick's subject is the relationship between Native American princess Pocahontas (although she's mentioned only by her later, Christian name, which is Rebecca), played by newcomer Q'orianka Kilcher, and the white man she loves, John Smith (Colin Farrell). Their forbidden love takes shape with tasteful restraint: They romp in the tall grass, she in thigh-high buckskin boots, he in rough breeches, as a piano tinkles sensitively but minimally in the background. Smith quickly recognizes that the longtime inhabitants of this new world are quite a jolly lot: "They are gentle, loving, faithful -- lacking in all guile and trickery," he says in voice-over; if cameras had been invented at the time, he'd surely want his picture taken with one.

But white men, as they're wont to do, just mess everything up, and the newcomers quickly begin sullying this new world, just as they did the old one. The "naturals," as the natives are called here, lose patience with them. Other stuff happens: Smith gets reassigned and leaves his true love. Widowed tobacco farmer Christian Bale emerges from the Batcave and instantly falls for the heartbroken princess, now a respected member of the colony. He wins her without even having to woo her with trinkets: "She has accepted my invitation to work in the fields. She understands the culture of tobacco." Who says diamonds are a girl's best friend?

There are other subthreads here, including a few where the politics becomes explicit: Malick occasionally casts his gaze on the follies of our early government. (At one point high muckety-muck David Thewlis is summarily executed for being a jerk.) The story moves from here to there as if in a trance. The picture is structured so we're bamboozled into thinking the narrative is unconventional, even though the story is essentially as straight as a pine tree. This is like a Tony Scott movie on quaaludes: Words and pictures are matched up in counterintuitive ways, and although the cutting is much slower than in Scott's hyperactive showboating, it makes just about as much sense. The movie's leisureliness is aggressive; the picture is artfully designed to make you feel that if you're bored, it's your own damn fault.

There should be plenty to look at in "The New World": Farrell works so hard I kept wishing I'd be allowed to actually watch him: He has some lovely moments, particularly in an early scene where he realizes, with erotically charged trepidation, that he's falling for the princess. And Kilcher -- who, sensibly, gets more screen time than any other actor, although it's still not enough -- puts casual meaning into every gesture and expression. Her performance has so much innate elegance that she practically sneaks off with the picture. And why not? A director who cares more for shots than for actors deserves to have his movie stolen out from under him. Just dangle a sunset in front of him and you're good to go: He'll be happily amused for hours.