In trying to justify Bush's warrantless spying, his defenders are distorting the facts about Clinton and due process of the law. 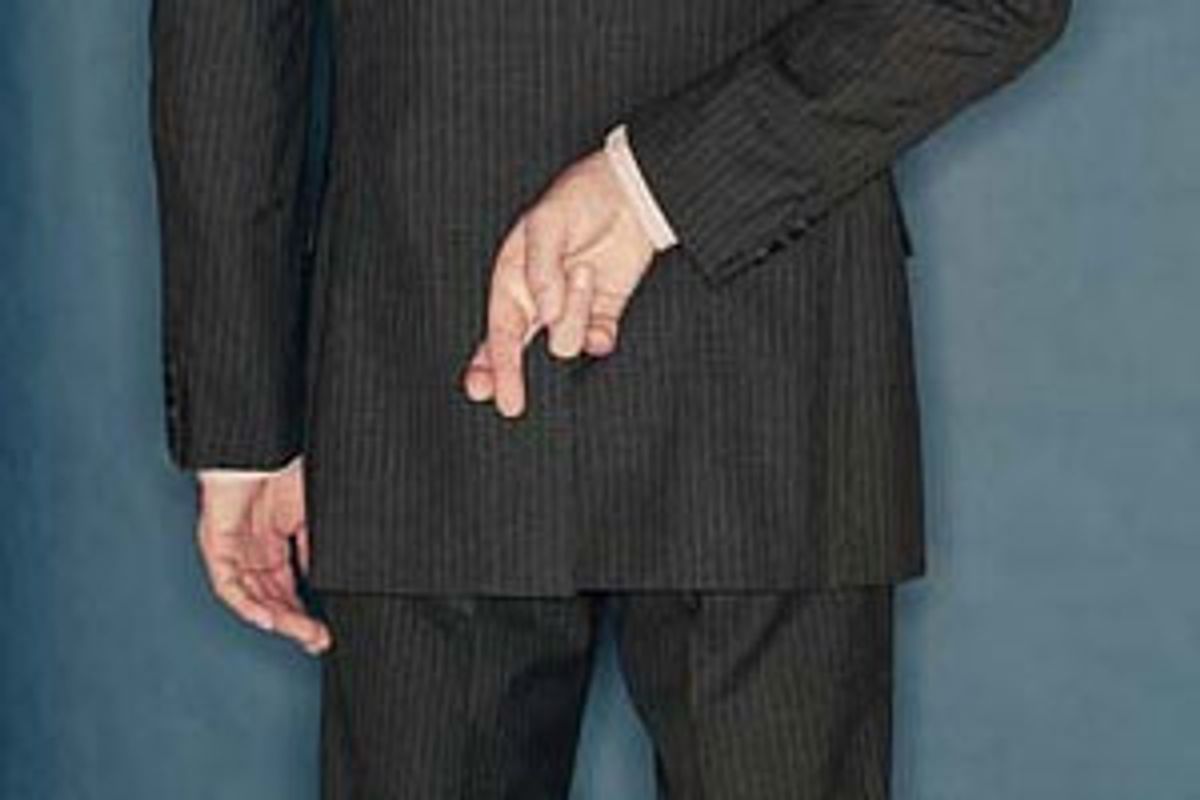 Notwithstanding the haughty pretensions of this imperial president -- who never apologizes and rarely explains -- the officials, scribes and courtiers of the Bush administration are busy fashioning excuses for the illegal-surveillance scandal. Advanced by Attorney General Alberto Gonzales as well as the likes of Matt Drudge and Rush Limbaugh, these sophistries range from the absurdly illogical to the blatantly misleading.

Someday the courts may justify or rebuke what Bush has done. Someday Congress may exonerate or punish him. Someday we may find ourselves yoked by a kinglike "wartime president," or we may at last be freed of his ongoing excesses. In the meantime, however, it is worth clearing away the intellectual chaff spread so persistently by his enablers.

In his signature style, Drudge has sought to suggest that Bush has done nothing that Democratic presidents didn't do, which may reflect his own continuing obsession with Bill Clinton. The Internet gossip's headline this week blared, "Clinton Executive Order: Secret Search on Americans Without Court Order..." He went on to link to a National Review Online article that made much of a Clinton order in 1994 authorizing warrantless searches. But it is important to connect the dots, as the president would say, in Drudge's ellipsis points. The Clinton executive order permitted such searches only under certain very limited circumstances that are legal under the Foreign Intelligence Surveillance Act, the very statute that Bush has admitted ignoring.

The Center for American Progress noted Wednesday what Drudge left out and what the National Review's Byron York elided -- namely, the difference between search or surveillance operations conducted against foreigners and those conducted against American citizens. ("Some people," York later noted in chiding exaggerations on both sides of the issue, "have said that Bill Clinton signed an executive order authorizing such surveillance; he did not.")

The Foreign Intelligence Surveillance Act restrictions were designed to protect Americans, not to hobble U.S. counterintelligence aimed at foreign spies and terrorists.

That was why Clinton's order authorized the attorney general "to approve physical searches, without a court order, to acquire foreign intelligence information for periods of up to one year" -- but only if the attorney general "makes the certifications required" by Section 302(a)(1) of FISA. That section requires the attorney general to certify that the search or surveillance in question would not invade the property or premises of "a United States person," meaning a citizen or someone living here legally. By leaving out the same qualification, Drudge made the same incorrect implication about an order signed by Jimmy Carter in 1979. Then again, as Drudge has occasionally boasted, his reporting is 80 percent correct -- but sometimes that omitted 20 percent can make all the difference.

On Tuesday, Limbaugh, another Clinton obsessive, relied on the same false assumptions to claim that the Clinton administration had done "exactly what George W. Bush did" in authorizing warrantless surveillance. In fact, the position of the Clinton Justice Department was clear: Not only did Clinton believe that FISA properly balances civil liberties and national security, but he supported expanding its provisions in 1994 to cover physical searches as well as electronic surveillance.

Perhaps the most revealing assertions were made by Gonzales, the White House yes-man who has given cover to every trespass of legality by this administration, from the abandonment of the Geneva Conventions to the indefinite detention of citizen "combatants."

Attempting to defend the secret domestic surveillance program, the attorney general said that the White House had considered asking Congress to pass new legislation that would explicitly permit those activities. He asserted that Congress had in fact already given blanket approval for such spying with its approval of the war resolution. But he also confessed that the administration had abandoned the idea of new legislation because getting a bill through Congress "would be difficult if not impossible." In other words, Congress would refuse to pass legislation authorizing activities its members had supposedly approved after Sept. 11, 2001.

Obviously that argument makes no sense -- and the dishonesty of the Bush defenders only undermines the public confidence that would be necessary to entrust the White House with expanded powers to spy. New technologies that enable the government to sweep through gigantic amounts of computer and voice data, in search of clues to terrorist threats, may well require new legislation. Nobody wants to enable terrorists to escape timely detection. But if the president gets away with behaving like a tyrant, with constitutional checks and balances erased by fiat, then the terrorists have indeed already won.