Christmas with the Wilsons

For one day each year, my mixed-up family of Jews, Muslims, Christians and New Agers gathers to sing karaoke carols, munch on jello mold and get wasted at church. 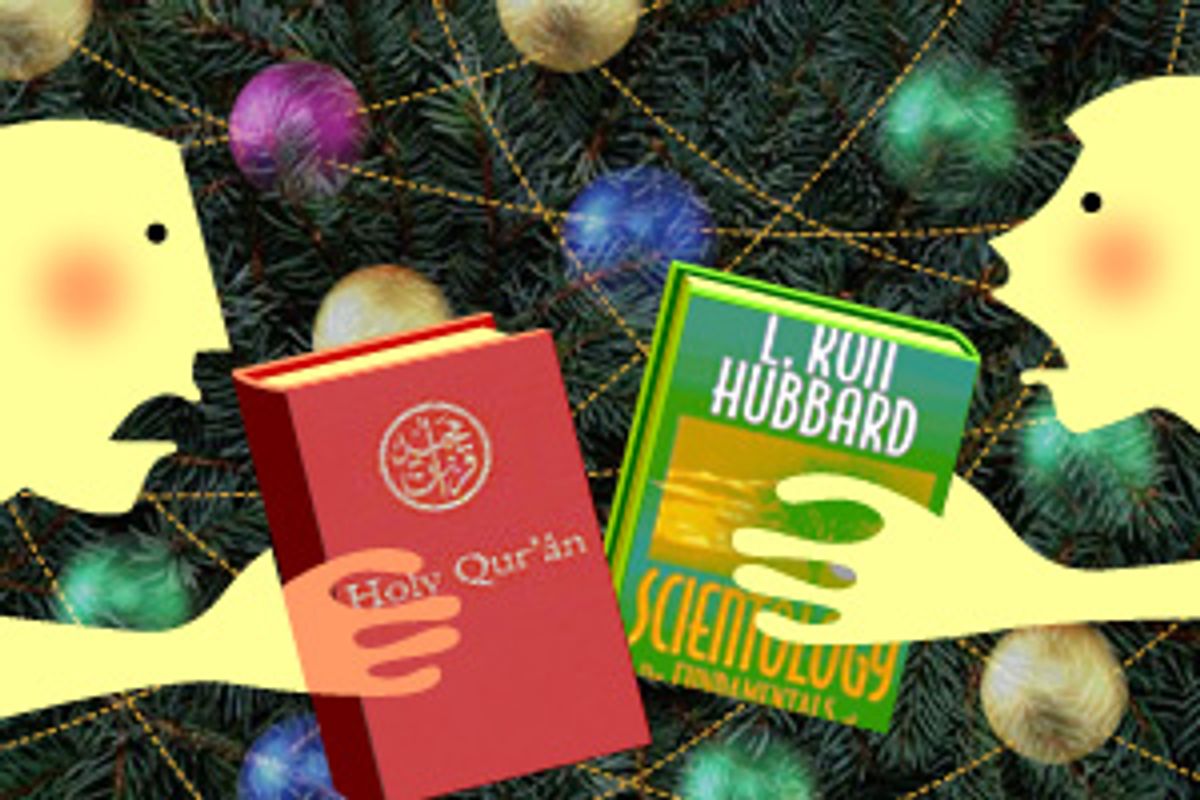 Christmas Day has always been an interesting time for my family because, like most families, we really have no business being related to one another, but we get together anyway out of loyalty and a certain strained but potent affection.

We are, to put it mildly, an ecumenical group. My mother, a jazz pianist who calls herself "The Duchess," was raised by Christian Scientists but now subscribes to a self-invented theology she calls "Ishta Devata," an unformed, New Age, quasi-Buddhist mysticism involving psychic visions from an inner network she calls "Channel 12." My father was raised by members of the Anthroposophical Society and is believed to be telekinetic. My aunt on my mother's side is a hardcore Scientologist, who until recently was exiled from Christmas for her tendency to hard-sell the guests on the divinity of L. Ron Hubbard. My sister, whose husband is Moroccan, recently converted to Islam. My mother complains bitterly that she's no longer allowed to call my sister during the five times a day she is praying toward Mecca, which, considering how often Mom likes to phone, has inspired me to the revelation that Allah is most kind. I am a Santeria initiate, which means I endure jokes every year about sacrificing chickens. If I happen to be at the buffet table, I usually smile, grab the electric carving knife and walk toward the cat. But most of our extended family is Jewish, apart from my best friend Mark and his boyfriend, the Episcopal priest.

We all come together for Christmas under our one unifying conviction that Christmas is less a religious holiday than the one day a year we all start drinking before noon.

The Duchess is a self-professed "Christmas Freak." Every year, she converts our very small, modest suburban home into a glittering display of fire hazards. The spatial constraints of the living room, it being small and three-fifths occupied by a grand piano, demands that the six-foot-tall tree be put within inches of the roaring fireplace. My father is an art professor, who, since retiring, has undertaken a variety of projects in the backyard, including, but not limited to, arc welding, telescope building, habanero pepper cultivation and blacksmithing with a coal forge that projects foul smoke all over the neighborhood. This agitates the neighbors slightly less than the 25-foot ham radio antenna that dwarfs our roof, to which Dad annually affixes a Christmas star large and bright enough to guide planes.

"Check it out!" Dad said, wandering into the kitchen last year looking like he just came down the chimney, with a mangled wad of wrought iron tucked up his sleeve. "I made a hook!"

Christmas is a time for recrudescence. Since the late 1970s, to the dismay of my sister and me, Mother's Christmas outfit has been an enormous red-and-green-plaid taffeta skirt resembling something Scarlett O'Hara might wear to go duck hunting. This skirt appears in tandem with a recipe Mother calls the "aspic," a horrifying creation involving V8 juice, lemon jello and pimento olives, chilled in a mold the shape of a lobster and finally allowed to lie in state on a bed of lettuce. The aspic could be a terrific prop in a David Cronenberg film, where it might visually explain a sinister toxicity on the ocean floor.

The Duchess has a pathological need for Christmas carols to be sung every year, something that many of us dread, because she requires that everyone go out on the lawn and sing "Silent Night" a cappella, even when it is raining. Singing isn't the problem -- we like singing, which is why Mark and I always have our annual "Pimps and Ho's Karaoke Meltdown" on Dec. 23. The last few years, Mark and I have mounted an insurgency to make the mandatory caroling more closely resemble our karaoke party. This does not please the Duchess. The first year, Mother was so piqued that Mark and I made her play "Copacabana" instead of "Good King Wenceslas" that before a roomful of stunned onlookers she dramatically flung herself onto the rug and went fetal for nearly 15 minutes. She could not be roused, even when my sister obtained her Renaissance Faire cape from the hall closet and threw it over her body in classic James Brown fashion.

Mark and I ultimately succeeded, and now there are several new de facto Christmas carols in the family repertoire, such as "Me and Mrs. Jones" and "Those Were the Days," the theme song from "All in the Family," sung in Edith and Archie Bunker voices. My godmother, a beautiful African-American woman who sang in my mother's rock band in the '70s, must be begged every year to do her nasal Barbra Streisand impersonation so I can sing Barry Gibb's eunuch falsetto in the "Guilty" duet.

On Christmas Eve, we all, including the Muslim contingent, go to Mark's boyfriend's service at Grace Cathedral in San Francisco, but not before taking several swigs from my father's flask in the church parking lot. Last year Dad got the last laugh by filling his flask with a homemade habanero vodka scorching enough to make my mother involuntarily weep throughout the service. My brother-in-law perceived this as divine retribution, since, being a Muslim, he resented having to listen to an Episcopalian service delivered by homosexuals.

With all the religious differences, you can imagine how interesting things get around the Christmas tree after a few more hits from the flask. The best part of Christmas Day last year was when my hardcore Scientologist aunt and my hardcore Muslim brother-in-law cornered each other and tried to cure each other of their mutual religious illusions. Since we had all endured similar attempts at salvation from both of them over the years, it really made the rest of us feel closer.

Finally, we all sit down to Christmas dinner. I look around the table, and there we are ... Jew, Jew, Muslim, Jew, Santerian, Episcopalian priest, Scientologist, Jew, Muslim, and everyone else, in various undeclared states of Ishta Devata. And the dinner comes out ... Costco's finest spiral-cut ham. And truthfully, Jews and Muslims aside, I don't think any of us likes ham.