The best and worst in television

Use the holidays to give your TiVo new marching orders! Here's an overview of what to watch, and what to banish from your TV forever. 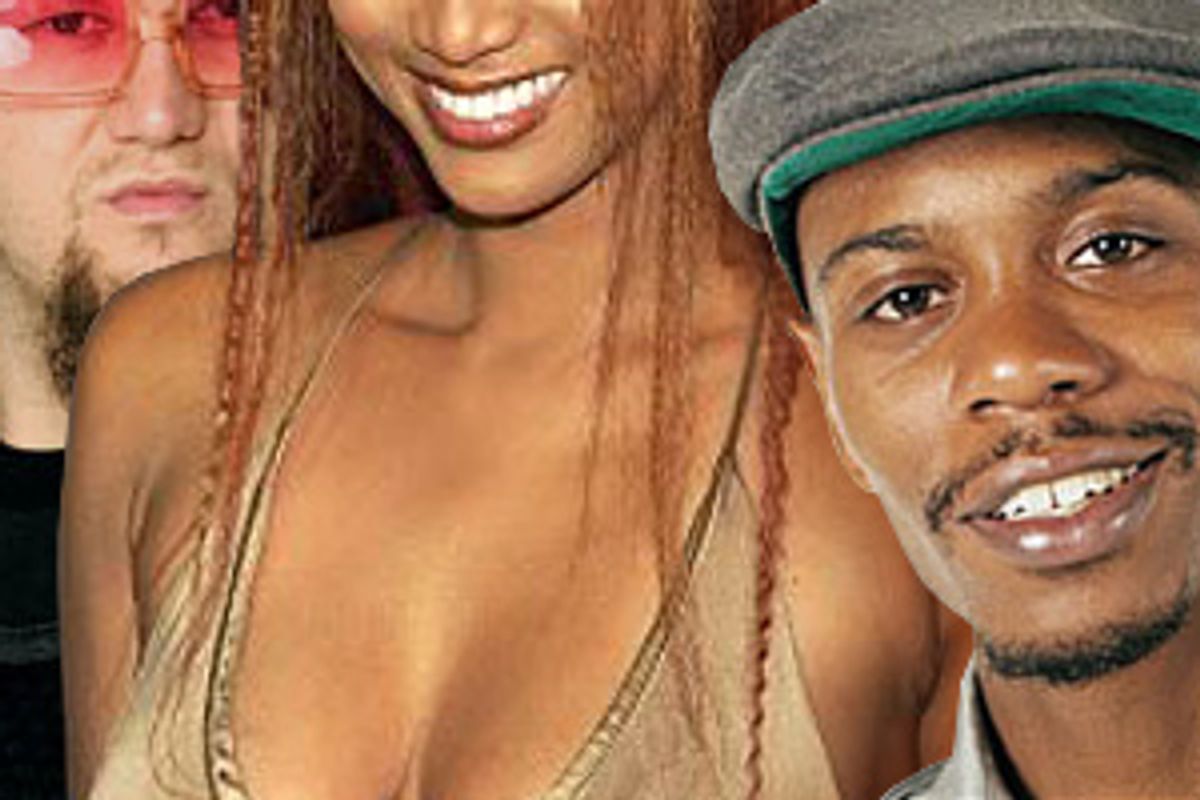 At the end of the year, after the presents are unwrapped and the tree starts dropping needles and the sugar cookies start to taste stale, most of us get a strong urge to engage in a little cathartic purging. Gazing out at the wreckage of the holidays, we're seized by the impulse to rip down the lights and sweep the tree, the decorations and all the unwanted presents out the front door -- along with our brothers-in-laws. Most of us fight off this urge, though, and spend the week shuffling aimlessly around the house in dirty socks, nibbling on stale sugar cookies and chuckling halfheartedly at our brother's wife's father's stale jokes.

Rather than sinking into a post-holiday stupor this year, why not take some of that shuffling-and-nibbling time and dedicate it to clearing the detritus off your TiVo? You may not be able to return those unwanted gifts, but at least you can cancel your season pass for a few unwanted shows, and reassess your TV-watching priorities for the coming year. Remember, thanks to DVR technology, your TV is no longer in control of you, you are in control of your TV. Always remember that you're the boss!

That means that you don't turn on the TV "just to see what's on." You don't relax and waste a little time with your TV before dinner. You give your TV an inch, it'll take a mile. That's the way TVs are made -- it's their nature. They're constantly trying to push your boundaries. "Oh, so you enjoyed 'Jeopardy,' did you?" your TV asks, trying to sound casual. "Well, then, I bet you'll enjoy 'Wheel of Fortune,' too." Six hours later, you'll regain consciousness, confused and soiled and halfway through your fourth "E! True Hollywood Story."

Personally, I'm getting the upper hand on my TV this week, and I'm starting by ripping some of the old standbys of the reality genre off my top 10 once and for all. Because no matter how many times my TV lures me into watching another season of "Survivor" or "The Apprentice," I never really emerge a better, more satisfied person for it. In fact, after the second hour of the two-hour season finale, I want to hurl myself over the nearest cliff. Is my TV trying to kill me?

Remember, just because those reality shows suck you in, that doesn't mean you really, really want to watch them. Maybe you just want to see who wins in the end. The key to taking back the power your TV has over you rests in recognizing which shows you watch only because you're curious about what comes next. Like sitting through a "Law & Order" repeat to see who killed the girl or wading through your 100th episode of "ER" to see if the guy with the rare degenerative disease lives, sometimes you get wrapped up in the suspense but you still don't enjoy yourself.

That said, with shows like Bravo's "Project Runway," or CBS's "Amazing Race," the scenery and the antics along the way consistently make the ride worthwhile. If you're in the mood for something a little more campy and ridiculous, you'll want to include either Fox's "Skating With Celebrities" or ABC's "Dancing With the Stars" on your short list. "Beauty and the Geek" and "American Idol" are also coming back in January, but I'd definitely classify both shows as the sort of serious time drain that your TV will kill you softly with, if you let it.

Finally, I have to admit that "America's Next Top Model" has a permanent place on my season pass list, mostly because Tyra Banks is quickly transforming into an egocentric she-beast who threatens to swallow the known universe. It just seems wise to keep an eye on her right now.

Onward to the comedies. Ideally, we like our comedies to be funny. This means, by my calculations, that they should make us laugh out loud occasionally. If you're smiling slightly throughout the show, but never laughing? Well, that means you're mildly amused. Remember, if being mildly amused is your goal, you can always amble down to your local mall, sit on a bench, and watch. Mild amusement is just an Orange Julius, a mumbling bag lady and a gaggle of backfat-sporting teenagers away.

But if what you seek is hearty laughter, you'll want to steer clear of most of the sitcoms your TV is currently foisting on you, with a few notable exceptions: NBC's "The Office" is good for at least two big laughs per episode, which is exactly two more than you'll get from the other sitcoms. "Everybody Hates Chris" and "My Name is Earl" are both solid, chuckle-heavy shows, depending on what you like better, smartass kid antics or broke degenerate antics. Just don't let your TV convince you to watch NBC's "Four Kings," a midseason show about a bunch of slacker guys who live in an inherited apartment. I know, I know, Seth Green is in it, but the pilot really isn't good.

The only sure thing, of course, is the measly four-episode return of "Chappelle's Show," but that doesn't even happen until late spring or so. Oh, Mr. Chappelle. Why won't you compromise your artistic integrity for us? We need you, now more than ever!

Now let's move on to a few new sitcoms that, if you're patient, might eventually be worthwhile. If you loved "High Fidelity" (the movie) and "Ed" (the TV show) you might like CBS's "Love Monkey," which stars Tom Cavanagh (from "Ed") as a picky but lovable but commitment-phobic single guy living in NYC and working in the record industry. If that sounds hauntingly similar to your experiences with Match.com and you always really liked Jenna Elfman from "Dharma & Greg," you might enjoy CBS's "Courting Alex," which stars Elfman as a busy, Type A lawyer who doesn't have time for love. OK, everyone has time for love, and "Courting Alex" isn't exactly laugh-out-loud funny, but Elfman is less annoying than she was as Dharma, and her love interest is played by Josh Randall, who was great as the goofy married friend on "Ed."

Yes, all the new sitcoms are inhabited by the stars of old sitcoms. That's the Law of Conservation of Sitcom Stars. CBS's "The New Adventures of Old Christine," for example, is Julia Louis-Dreyfus' second try at her own show (after "Watching Ellie"), which is odd considering how talented she is. Fans of "Seinfeld" aren't likely to adore "Old Christine" at first sight -- Louis-Dreyfus plays a divorcée whose husband starts dating a younger woman with her same name (played by the always-funny Emily Rutherford). Still, despite some clunky moments common to sitcom pilots, what sets "Old Christine" apart is its odd, slightly skewed perspective, and the fact that it features characters and situations that are obviously based on real lives, not pulled out of the whimsy-filled heads of precocious former "Harvard Lampoon" writers. In short, this is a show for old people who are in denial about being old. Of Brazilian waxes, for example, Christine says, "I don't know why people think that's so sexy! I did that once, it was like a hair arrow pointing to my C-section scar." Now that's comedy!

You also won't want to miss the last episodes of Fox's soon-to-be-canceled "Arrested Development," nor will you want to miss the opportunity to pressure Fox into keeping the Emmy-winning show around as payback for torturing us with their other insipid programming. (Maybe word that a little differently in your letter to them.)

Finally, comedy fans should tune in for UPN's "South Beach." Technically, "South Beach" is a one-hour drama, but these bitchy models and blandly attractive tough guys are packing more laughs than heat. Plus, you have to love Vanessa Williams, appearing here as the only middle-aged woman who looks younger than her twentysomething costars, thanks to the wonders of modern medicine.

You're really going to be glad you cleared all those crappy reality rehashes and flaccid sitcoms off your TiVo, though, because you're going to need the space for all the really great dramas coming up. Can you believe it? Seems like yesterday, there was nothing but a handful of mediocre procedural dramas on TV, plus "The West Wing" and "ER." Now we've got "Grey's Anatomy" and "House," both of which improve on the now-aging "ER" formula, and you can choose your favorite flavor, dewy-eyed, love-struck idealist (Grey) or cranky, pill-popping jerk/genius (House). Unfortunately, "Commander in Chief" started strong, but features far too much saintly mother behavior and too many scenes where children are tucked sweetly into bed to constitute an improvement on "The West Wing."

"Lost" and "Invasion" are the main survivors of the fear-mongering bake-off this fall, while, sadly, "Threshold" failed to deliver on a really intriguing pilot, and was promptly canceled. Lots of people just love "Invasion," but I'm having trouble seeing what all the fuss is about. I don't really care that the creepy blond mommy can breathe underwater, and the alien lights in the swamp don't scare me. "Lost," on the other hand, is faster-paced and far more interesting than it was during its first season. The introduction of the other group of plane-crash survivors, the odd '50s-era authority experiment going on in the bunker, the possible reappearance of Walt -- all of these great plot points have made the show's days of All Suspenseful Music, No Action a distant memory. Even if you missed everything up until now, "Lost" is really worth tuning in for these days.

Another drama you might want to check out is the BBC show "Hustle," which will appear on AMC in January. I'm not the biggest fan of con men or heist movies, so I wasn't sure I'd love "Hustle," but it's really pretty entertaining. Imagine that movie "The Grifters," but replace the really dark, sad undercurrents with the cheery "everything works out perfectly in the end" tone of a James Bond movie. The show starts with Mickey, the Ferris Bueller of the con underworld, pulling together his favorite team of scam artists, "Oceans 11"-style. The team has a fail-proof plan, but wait -- they're being watched! Along with snappy dialogue and slick little scenes, what stands out the most about "Hustle" is how beautifully it's filmed. Every shot is an inventively lit, expertly framed work of art. The show is honestly worth watching for that reason alone.

Showtime's "Brotherhood," which explores the lives of an Irish family in Providence, R.I., looks like a worthwhile cross between "The Wire" and "The Sopranos" -- yet another nicely acted, well-produced, fairly engrossing drama in a sea of high-quality dramatic offerings. We probably have "The Sopranos" to thank for most of these shows, and we can thank our old mob pals in person, starting in March. Be still my heart!

That's not all, folks. "24" is back in January, as is "Battlestar Galactica," "The Shield," "Huff" and "The L Word." Throw in a great second season of "Veronica Mars," the ever-hilarious "Colbert Report" and, of course, "The Daily Show," and you've got a 25-hour a week viewing habit. But I bet that still puts you below the national TV-viewing average, and you know why? Because, thanks to your newly organized TiVo and your newly elevated position as boss of your TV, you don't waste your time on just anything. You're a thoughtful, organized TV viewer, one with discriminating taste and strong personal boundaries!

OK, then! Time to shuffle into the kitchen for more soggy gingerbread...