Salon critic Stephanie Zacharek picks her favorite films of the year, from the complicated, fascinating French film "Kings and Queen" to the rousing crowd-pleaser "King Kong." 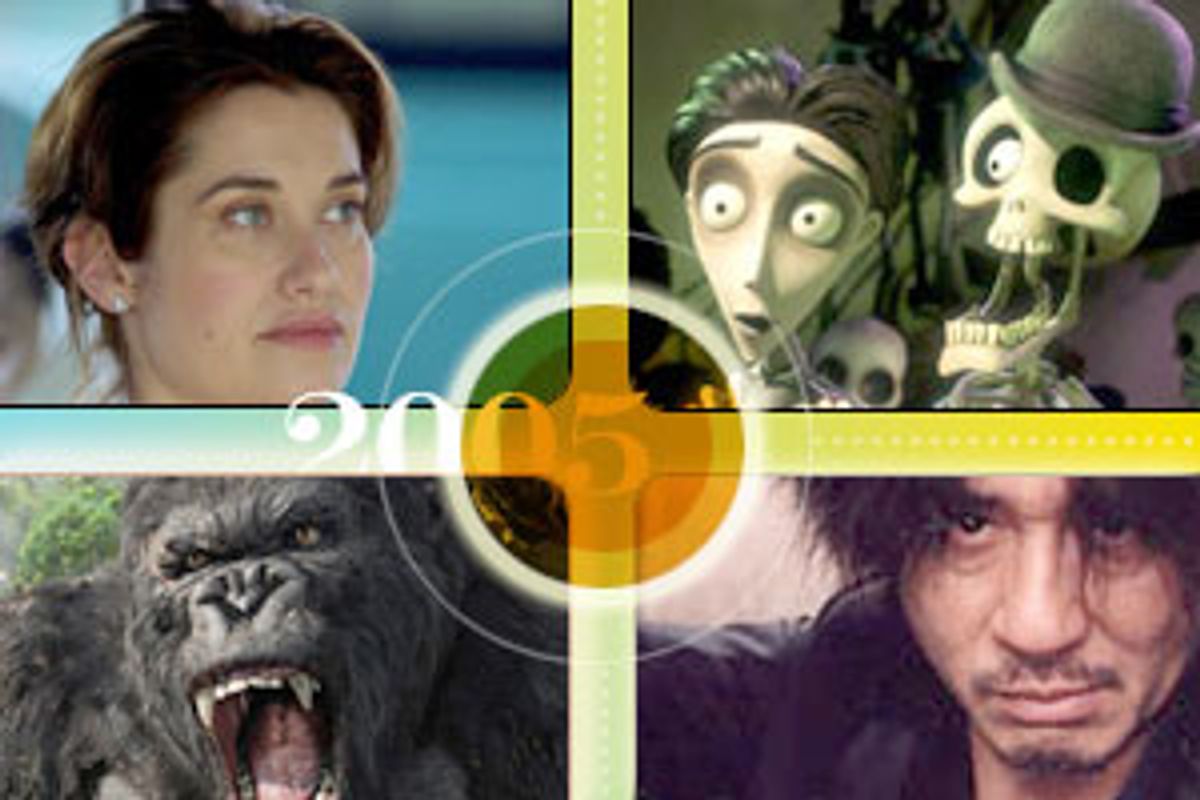 In a dinner conversation with some fellow critics a few weeks back, one of us said, "Let's not talk about our 10-best lists." All four of us agreed enthusiastically, ordered drinks -- and then proceeded to ask one another, "So, what does your list look like?" No one, of course, had all the same choices. But everyone agreed that, in a year of some really terrific movies, the last five or so slots on each of our lists were still open territory. We all had a long train of candidates hovering near the bottom, and we were still playing the Etch-a-Sketch game of slipping titles into the list, shifting them around, pushing them down into "Honorable Mention" territory, and then feeling sorry for them and wriggling them back up again.

This is somewhat true every year: Compiling an end-of-year list is always torture. Then there's the wedge between the stream of astonishing pictures that came from places other than Hollywood this year (from France, Italy, and Germany and Turkey, not to mention from all over Asia) and the much-hyped studio pictures that may (or may not) have made big money -- the ones some people insist you must like, or else you don't like movies. But there's not much to say about that wedge. If the goal of compiling any list is to be true to your own responses, then each list is going to be highly subjective. It's better that way: Consensus is always far less interesting than people think it is.

So, because a 10-best list is always necessary, here's mine. I prefer to call it a "10 favorites" list, because "best" connotes the application of some mythical standard of quality that doesn't always fit with the way we respond to movies.

And because of the Etch-a-Sketch factor, I defend my right to squeeze two movies into one slot.

Here goes -- perhaps not exactly in order of preference, but more or less:

"Kings and Queen" -- Arnaud Desplechin's story of an unlikable woman (played by Emmanuelle Devos, with the fury and vulnerability of 12 Greek goddesses combined) for whom, by the end, we feel something more fiercely protective than love. In one of the finest performances of the year, Mathieu Amalric plays her ex, a haunted elf of a man who looks and acts as if he can't afford to give away even the smallest bit of himself, and yet whose compassion turns out to be boundless. A complicated, fascinating picture -- it left me exhilarated and devastated.

"The Best of Youth" -- Marco Tullio Giordana's stunning six-hour picture, originally made for Italian TV -- spans 30 years in the life of one Italian family. This is a modest yet generous work: It never strains to be a work of art; instead, it humbly acknowledges that, even in the course of six hours, it can capture only a small corner of the range of human experience.

"Pride & Prejudice" -- Joe Wright's smartly, sharply condensed and intelligently imagined adaptation of Jane Austen's work is a love story with a deep awareness of class boundaries. We know at a glance how much, or how little, money means to any given character: We can read anxiety or confidence in the cut of an overcoat, in the type of knickknacks that decorate a room, even in the set of a character's shoulders. In this "Pride & Prejudice," realism isn't a punishment, but a kind of music. There isn't a frame in the picture that doesn't feel alive and immediate, instead of merely faithful.

"Old Boy" -- This operatic picture from South Korean director Park Chanwook begins as a revenge fantasy and evolves into something much more complex and redemptive. Though it's thrilling, violent and funny, it can't be classified as an action picture or a comedy -- it's too infused with tragic poetry to be so conveniently buttonholed.

"Tropical Malady" -- The first half of this supernaturally beautiful picture from Thai filmmaker Apichatpong Weerasethakul (who goes by Joe, for short) is a love story between a village boy and soldier. In the second half, a soldier -- it may or may not be the same soldier -- tracks a tiger in the forest, who may or may not be the reincarnation of the soldier's lost love. "Tropical Malady" is a haunted dreamscape of memory and longing, its plot more like a piece of music than a conventional story.

"The Beat That My Heart Skipped" -- Jacques Audiard makes a brash, vital version of James Toback's "Fingers," about a thug with music in his soul (played here by Romain Duris, who artfully peels away layers of his character's mystery scene by scene). The first time I saw "The Beat," I wasn't sure it was as interesting as the original; the second time, I realized Audiard had not only built on, but surpassed, "Fingers." It's a movie made with equal measures of bravado and humility -- the same mix of qualities you need to play Beethoven, Mozart or Bach.

"Breakfast on Pluto" -- Neil Jordan adapts Patrick McCabe's novel, set in the early '70s, about an Irish transvestite named Kitten (Cillian Murphy, in just one of the three stellar performances he gave this year) who leaves her repressive home for London. Her home country's political turmoil follows her, but never undoes her -- Kitten, like so many women during wartime, is far tougher than the men around her. A bracing picture about self-knowledge and self-love, and the search for a long-lost mother.

"The Skeleton Key" and "Land of the Dead" -- Two classic horror fables about the chasm between the haves and the have-nots. In George Romero's sharp, funny "Land of the Dead," zombies relegated to the outskirts of town revolt against the rich -- and the alive. Iain Softley's "The Skeleton Key" -- a picture that feels even eerier now that so much of New Orleans is now a ghost of its former self -- is less about revenge than about pure survival, over several lifetimes. A mordantly funny little number about regeneration and rebirth, all at the expense of the Man -- and beautifully made.

"Wallace & Gromit: The Curse of the Were-Rabbit" and "Tim Burton's Corpse Bride" -- It's unusual to have two stop-motion animation pictures in one year, but to have two so intelligently written, and so artfully put together, is pure heaven. Clever, lively and boisterous, "The Curse of the Were-Rabbit" also has a quiet heart. And "Corpse Bride," with its acknowledged debt to special-effects genius Ray Harryhausen, is a lush, modern valentine to old-fashioned sentiment, and to old-fashioned moviemaking, too.

"King Kong" -- In which Peter Jackson heeds the words of Dino DeLaurentiis before him: "When the monkey die, everybody cry."