At home with David Brooks

On the same day the right-wing Times columnist argued that women are happier at home, a mom who stayed at home contradicted him. 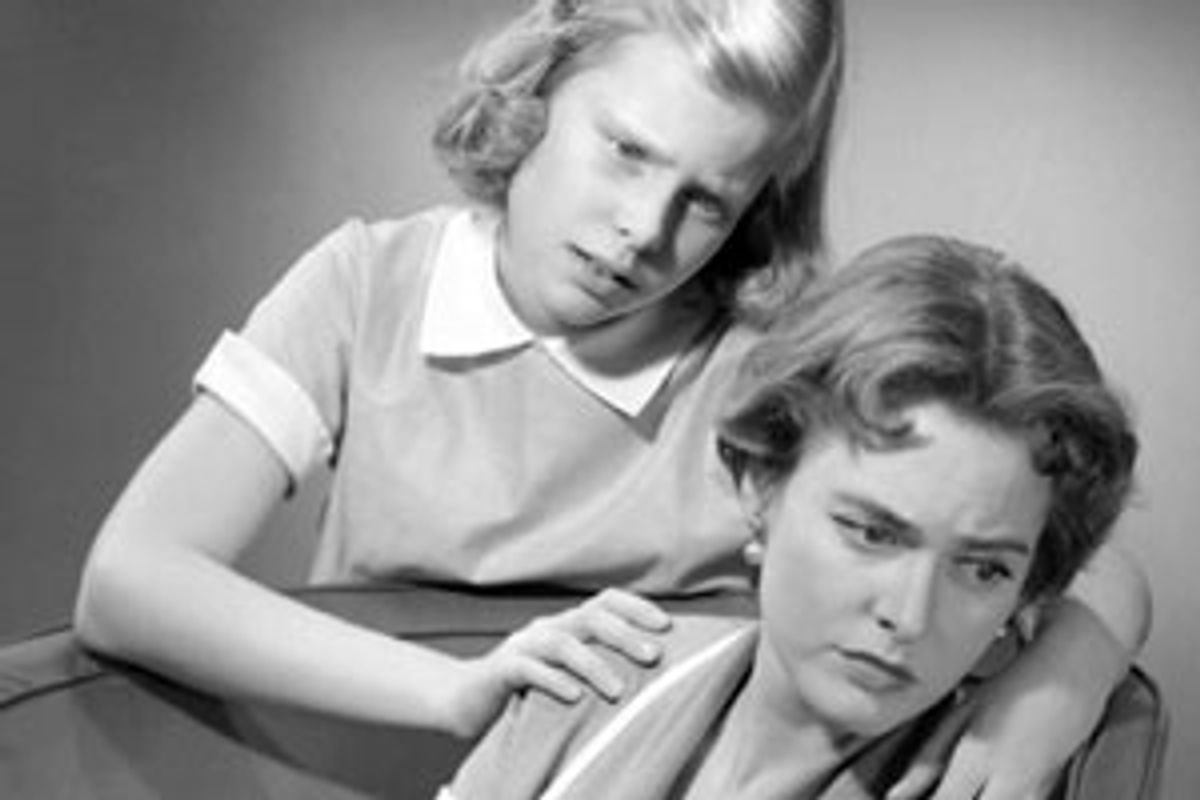 Those of us mesmerized by the escalating debate about the relationship between stay-at-home motherhood and feminism could not have asked for a balder manifestation of two sides of the discussion than this Sunday's New York Times.

First, Op-Ed columnist David Brooks weighed in on an American Prospect piece about the fallacies of stay-at-home feminism by Brandeis professor Linda Hirshman. In Hirshman's December piece, she vociferously argued that so-called choice feminism -- the ability to leave a career that many modern stay-at-home women describe as a perk of their emancipation -- is in fact regressive, symptomatic not of the successes of the feminist movement but of its failures.

Hirshman's piece was an angry, troubling battle call that has provoked fierce debate among feminists. Brooks answers her extremism with extremism. Impressed by the "full-bore, unapologetic blast of 1975 time-warp feminism," he bestows on the piece a "Sidney Award" as one of the best magazine essays of the year, on the grounds that it was so smart and dense that it took him a while to figure out how to poke holes in it. Finally, despite Hirshman's skill, Brooks is able to write, "of course, she is wrong."

Brooks takes issue with what he calls Hirshman's "astonishing" assertion that high-paying jobs provide more visibility and opportunity for satisfaction than a purely domestic existence. Hirshman originally wrote that "the family ... allows fewer opportunities for full human flourishing than public spheres like the market or the government ... assigning it to women is unjust. Women assigning it to themselves is equally unjust. To paraphrase, as Mark Twain said, 'A man who chooses not to read is just as ignorant as a man who cannot read.'"

In response, Brooks urges, "look back over your life. Which memories do you cherish more, those with your family or those at the office?" It seems there's only one answer here; Brooks cherishes his memories with his family more, and in that he is surely not alone. But couldn't he be failing to consider that perhaps the rewards of child rearing are more fully appreciated when they are balanced by a professional existence? That those family dinners with the twins are especially sweet when you haven't spent the previous 144 hours with the twins? Appreciation for both professional and personal accomplishment often stems from the discovery in each realm of the satisfactions lacking in the other.

But Brooks staunchly maintains that the rewards of an outside job pale next to the experience of parenthood, condescendingly inviting Hirshman to "spend a day as an associate at a big law firm." Why? Because being a professor and researcher never showed her what real professional work was like? Is it so hard to believe that a woman -- or man -- might find pleasure in a job that also overextends and exhausts them? Maybe Brooks should be invited to spend 18 years cleaning houses, ferrying children to play dates, and having no other outlet for his ambitions, imagination, talents or acquisitive desires.

According to Brooks, the "sort of brutalizing, dominating power that Hirshman admires" may be available in the workplace, but the home is really "the realm of unmatched influence." Here he's referring to the kind of influence that shapes "a child's I.Q., mental habits, and destiny." Apparently, women are supposed to be thrilled, and fully sated, by the chance to mold the lives of their children -- the vessels for their identity -- and pine not at all for the economic or political force that they themselves might exert in the outside world. Surely, David Brooks, New York Times Op-Ed columnist, must understand the pull of a public working life, the pleasures of influencing opinion. If he's really so aggrieved by his lack of power as an IQ-builder for the next generation, perhaps he should surrender his post to work full-time at a child-care facility.

But Brooks is a man. And, as he writes, Hirshman's biggest failing is in declining to address "the fact that men and women are wired differently." Citing research by "Bell Curve" co-author Charles Murray, Brooks gathers that "men are more interested in things and abstract rules while women are more interested in people." (That's women, folks. People who love people.)

Brooks is also surprised that in looking back over the essays of 2005, he noticed many that addressed "the big foreign policy issues of the year" -- (grunt, scratch) -- "[but] also an amazing number that dealt with domesticity" -- (giggle, sigh). That's because, according to the columnist, "the deeper you get into economic or social problems ... the more you realize the answers lie with good parenting and good homes." "Hirshman has it exactly backward," Brooks writes. "Power is in the kitchen. The big problem is not the women who stay there but the men who leave."

Central to Brooks' argument is the barely veiled suggestion that mothers who work outside the home surrender influence in their households. The dark little melody playing underneath his self-assured dismissal of Hirshman is that a breakdown of society can be pinned on all those women who have abandoned their rightful sphere of influence in exchange for the "brutalizing, dominating power" that he thinks Hirshman "admires."

It's a chorus that's been heard a lot recently, and at increasing volumes, as we inch closer to a year in which many have speculated about the possibility of the ultimate working woman -- a female president. It's as if critics like Brooks, petrified by the changes afoot, are urging us in silken tones to return quietly to our corners. "Back away from the White House," he seems to be saying. "You don't really want to be there anyway. You'll be so much happier, and more powerful, and influential, back home where you belong."

But Brooks should read his own paper, which on the same day his column was published ran a piece in the "Modern Love" section by Terry Martin Hekker, a woman who did exactly as he recommends -- stayed in the kitchen -- and lived to regret her choice.

Hekker wrote a Times opinion column more than 25 years ago about the satisfactions of full-time motherhood. That column led to a book, and a lifetime of proselytizing about the joys of housewifery. Having devoted decades to raising five children and celebrating the virtues and pleasures of "'making a home,' preparing family meals and supporting your hard-working husband," Hekker was stunned when, on her 40th wedding anniversary, her well-supported husband announced he wanted a divorce. Left not just emotionally bereft, but financially decimated in her 60s, Hekker was forced to pay insurance, taxes, a mortgage and car payments for the first time in her life.

Hekker's piece was problematic in its own ways. First, it did little to address a very obvious contradiction: that a woman who writes for the New York Times, publishes a book, tours nationally and appears on television shows as an authority on domesticity is not quite the hausfrau she extolls.

She may be more an emblem of full-time motherhood than a true practitioner, but Hekker proclaims that she is not alone. Several of her friends, women who'd "been faithful wives, good mothers, cooks and housekeepers," also found themselves discarded like "outdated kitchen appliances." Hekker now regrets a sentence from her original Times column mocking the feminist notion that "the only work worth doing is that for which you get paid." It turns out that that wasn't such a laughable idea after all. "For a divorced mother," she writes, "the harsh reality is that the work for which you do get paid is the only work that will keep you afloat."

And so Hekker, the preacher of post-feminist domesticity, has changed her mind. "I read about the young mothers of today -- educated, employed, self-sufficient -- who drop out of the work force when they have children," she writes. "And I worry and wonder ... Maybe they'll be fine. But the fragility of modern marriage suggests that at least half of them may not be."

Hekker observes that "the feminine and sexual revolutions of the last few decades have had their shining victories, but have they, in the end, made things any easier for mothers?" Here, maybe unconsciously, she is echoing Hirshman's controversial thesis: that the persistent inequities of the home are the unspoken, buried failures of the feminist movement.

Perhaps Brooks is right about one thing: The number and intensity of pieces about domestic life are increasing by the day. Maybe it's because women are being stirred from a self-justifying stupor and realizing that there remains a brigade of Americans who become increasingly nervous about women's professional and economic strides and deal with it by trying to scare them off the path.

For further evidence, look no further than John Tierney's Tuesday Times column about how three women graduate from college for every two men, and his prediction that most will end up lonely spinsters. In it, he concludes that women's rights advocates have been "so effective politically" in their claims about "supposed discrimination against women: the shortage of women in science classes and on sports teams" that "the shortage of men period" had been forgotten. "You could think of this as a victory for women's rights," writes Tierney, "but many of the victors will end up celebrating alone." There it is again, that threat. Keep this up and you'll be punished, ladies. There is payback everywhere you turn: Leave the home and your kids will raise the crime rate, get those educations you've been fighting for and you'll drive men out of classrooms and become unmarriageable, and, as Hekker points out, give up your independence to wholly rely on the emotional and economic consistency of another human being, and you'll get screwed.

The good news is that we're talking about three stories in as many days. This debate has in recent years been muffled -- out of embarrassment or paralysis in the face of problems so thorny and personal that they are hard to parse, let alone solve. It's about time we all started taking the politics of the American home seriously again, remembering that the personal is absolutely political. If David Brooks is so quaintly fascinated by the number of pieces about domesticity in 2005, I urge him to buckle his seat belt in preparation for a bumpy 2006.