"Daredevil" suffered for years under Frank Miller's shadow, but Brian Bendis and Alex Maleev made it one of the most engrossing comics of the last decade. 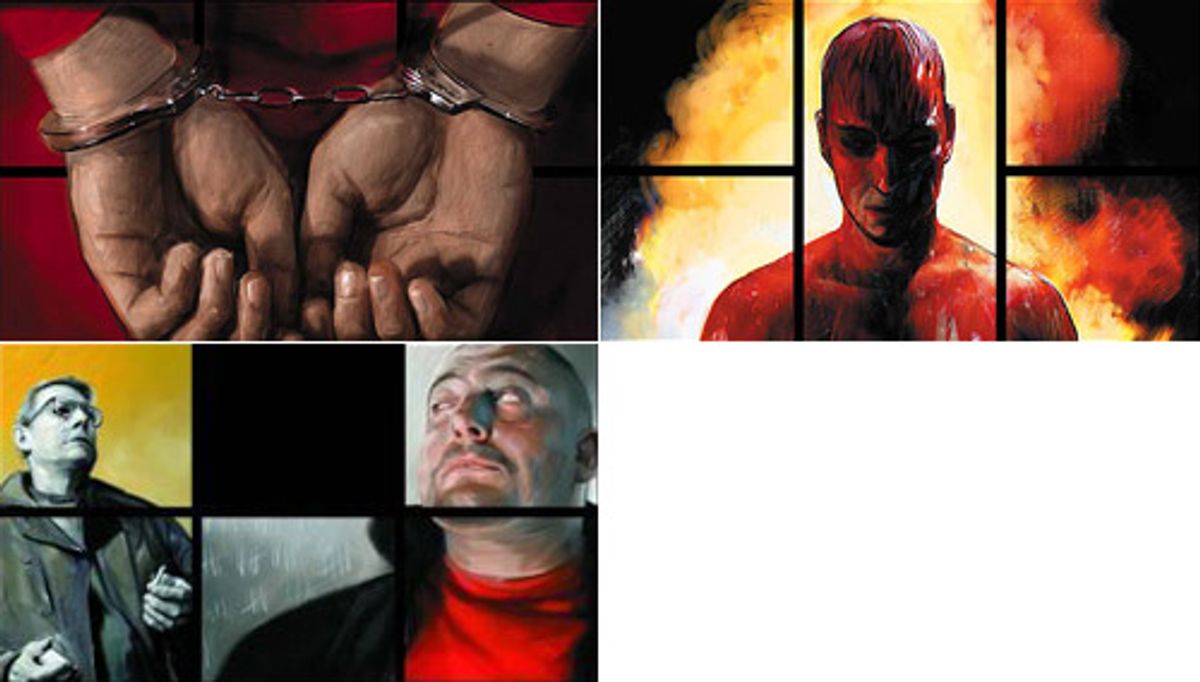 When the final issue of Brian Michael Bendis and Alex Maleev's four-year run on "Daredevil" appears later this month, it'll conclude one of the most engrossing stories that's appeared in mainstream comics this decade, an ornately zig-zagging narrative about moral blindness and double lives, with a hero sinking irreparably into a pit he's dug for himself. (The first three-quarters of their collaboration have been collected in six paperbacks or three hardcovers, all published by Marvel.) Bendis is the most prolific writer in comics right now -- he writes four other monthly series and then some -- but his work with Bulgarian-born artist Maleev has a distinct tone and look, an intimate, understated security-camera perspective on the demimonde of crime, law and the press. They've managed to make "Daredevil" their own -- a doubly impressive feat, considering that almost everyone who's worked on the series for the past 20 years has struggled and failed to get out from under Frank Miller's shadow.

"Daredevil" was launched by Marvel Comics in 1964 as a superhero comic with a Big Shocking Twist -- the hero is blind! and a lawyer! because, all together now, justice is blind! And he dresses up in a spandex devil suit, because he lives in the Hell's Kitchen neighborhood of New York! The series spent the next 15 years limping along as the poor cousin of "Spider-Man" and "Fantastic Four." When Miller, then an unknown 22-year-old cartoonist, and his artistic collaborator Klaus Janson began their work on the series in 1979, it was marginal at best, a generic superhero title with no particular reason to exist. They quickly reworked it into something far darker -- both visually and metaphorically -- and more interesting than it had been, influenced by film noir, crime fiction and Will Eisner's old "Spirit" comics. Miller's "Daredevil" became hugely popular, especially after he introduced Elektra, the hero's ex-lover, now a ninja assassin. Ninja assassins were pretty big in the '80s.

Both Miller and Janson left "Daredevil" in 1983, and went on to wider celebrity with "The Dark Knight Returns" and (in Miller's case) "Sin City." But from then on, "Daredevil" was the comic book Frank Miller used to do; nearly everyone who attempted a "Daredevil" story after them was either trying to send "a valentine to Frank Miller," as Bendis calls it, or to rebel against his legacy. (Both the wretched "Daredevil" movie and the even worse "Elektra" movie were ineptly crayoned valentines.)

When Bendis and Maleev began their "Daredevil" collaboration in late 2001, they paid their respects; most of the supporting characters from the Miller era appeared in short order, most notably Wilson Fisk, the enormous Hell's Kitchen crime lord known as the Kingpin. Their "Daredevil" looked and moved nothing like Miller's, though. From the beginning of their first issue, Maleev unleashed a drawing style that's sometimes been called "photo-realistic," which it isn't, exactly -- it's wildly, unmistakably stylized, even when he's clearly working from photographs of cityscapes or models. But it's believable, even seductive, in the same way a grainy surveillance tape is seductive. And their opening story line, "Underboss," caroms back and forth in time like a ricocheting bullet: a model in miniature of the way Bendis' four-year plot loops around and through itself, revisiting key moments from different perspectives. (Julian Darius has assembled a terrific set of annotations for "Underboss" and its sequel, "Out," teasing out their scrambled chronology.)

That splintered, documentary approach is appropriate for Bendis and Maleev's overall story, one of whose major themes is information and evidence -- who knows what, and which secrets are actually secret. At the center is a nasty twist on one of the sacred tenets of superhero comics: the secret identity. Beneath his mask, Daredevil is a trial lawyer, Matthew Murdock. If that were ever to get out, his life would be destroyed -- he'd be instantly disbarred, and go to prison for any number of obstruction-of-justice charges -- and the lives of everyone around him would be at risk from his enemies. So nobody knows. Except for a bunch of other superheroes, and various ex-girlfriends, and his partner at his law firm, and a trusted reporter or two, and a rather large number of people who've seen him with his mask off, and a bunch of murderous ninjas, and -- oh, yes -- the Kingpin. And the Kingpin's family knows, too, and so do a handful of friends they've blabbed to, and following a mob power struggle, one morning Matthew Murdock wakes up and his secret is on the front page at every newsstand in Manhattan.

There's no going back. From that moment on, the series' hero is in a morally untenable situation, and everything he does makes things worse. The only thing Murdock can do is to start lying, and make all of his allies lie for him, too. He denies everything. He files lawsuits that he knows are fraudulent. He beats the Kingpin half to death, drags his unconscious body into an underworld bar, and declares himself the new boss of Hell's Kitchen. Then the narrative abruptly jumps forward a year, and things really start going downhill.

The second half of the Bendis-Maleev run fills in the gaps of the missing year bit by bit, and suggests what happens when a hero chooses to rule in hell (or its kitchen) rather than serve in heaven. Murdock has taken on the responsibility of single-handedly saving his community, and he can't even save himself. He's forced to break ties with his allies; he becomes the pawn of greater legal powers than his own; he's de facto a Kingpin himself. Bendis hints briefly that Murdock might have had a nervous breakdown before everything went wrong, then makes it clear that he's just made one terrible error in judgment after another, out of pride and shame. By the final Bendis-Maleev story line, "The Murdock Papers" (which probably won't be collected until this summer, but that's what comics stores are for), Daredevil is trapped and desperate, under attack by both sides of the law he used to defend, and he's made it impossible for anyone around him to do right, either.

Naturally, there are all sorts of other superhero-comic devices keeping things lively, too: a sexy ex-Soviet spy called the Black Widow; a couple of cameo appearances by Spider-Man; the illegal drug Mutant Growth Hormone; a woman known as the Night Nurse whose clinic patches up injured heroes, no questions asked. It's melodramatic, pulp-fictional stuff, and what keeps it from getting soggy is Bendis and Maleev's shadowy, low-key delivery. Bendis' dialogue is crisp and fragmentary, often David Mamet-inflected; his favorite trick is to give the reader just enough information to get a sense of what's happening, letting crucial context slip out bit by bit, much later. His Matthew Murdock thinks and talks like a lawyer, convinced that he can make true the legal fiction that he's not Daredevil if he keeps repeating it, even as the story's gap between what's just and what's legal keeps widening. And the violence of Bendis' "Daredevil" isn't what usually gets called superhero-comic violence -- the glamorous, bloodless fight scenes he writes in "Ultimate Spider-Man" and "New Avengers." In "Daredevil," it's quick, confusing, horrible and resonant, and its victims are haunted or ruined by it.

Maleev isn't much for heroic poses, either. His artwork has the appearance of a newspaper photo that's been blown up and photocopied until it disintegrates into blotches and grains -- the backgrounds in his outdoor scenes appear to actually be degraded photographs, and his characters' body language and facial expressions are indicated more by jagged, scribbly flickers of ink and spackled folds of shadow than by clear, continuous lines. (Often, a blown-up detail from one panel becomes another.) Colorists Matt Hollingsworth and Dave Stewart reinforce his drawings with flat, subdued tones that allude to the look of hand-tinted black-and-white photographs.

The visual techniques Maleev and his colorists use change a little with the demands of each story line: In the "Golden Age" sequence, which deals with the history of the rulers of Hell's Kitchen, Maleev draws flashbacks to the early days of Daredevil's career as simpler line art, and they're colored with slightly off-register matrices of dots against an off-white background, to suggest the look of old four-color comics on yellowing newsprint. The one really jolting thing about reading the Bendis-Maleev "Daredevil" in sequence, actually, is that a couple of crucial segments are drawn by fill-in artists; they're all competent or better, but they're all normal cartoonists, and the contrast with Maleev's technique breaks the spell.

"Daredevil" will be continuing after Bendis and Maleev bow out, although Bendis has noted that his conclusion will make things awfully difficult for his successors. Next month, the series is being taken over by writer Ed Brubaker and artist Michael Lark, who've already collaborated on some impressive story lines for "Gotham Central" (a police procedural set in Batman's Gotham City). Brubaker has said that he wants to "piss all over the book and make it mine as soon as humanly possible." That's promising, even though it's going to take some doing -- but it didn't look like anybody could pull it off after Frank Miller, either.

Douglas Wolk's graphic novels column appears at the beginning of each month in Salon books.