To most people, Jack Abramoff's stylish brim says "Godfather." But if you're an observant Jew, it tells a much different story. 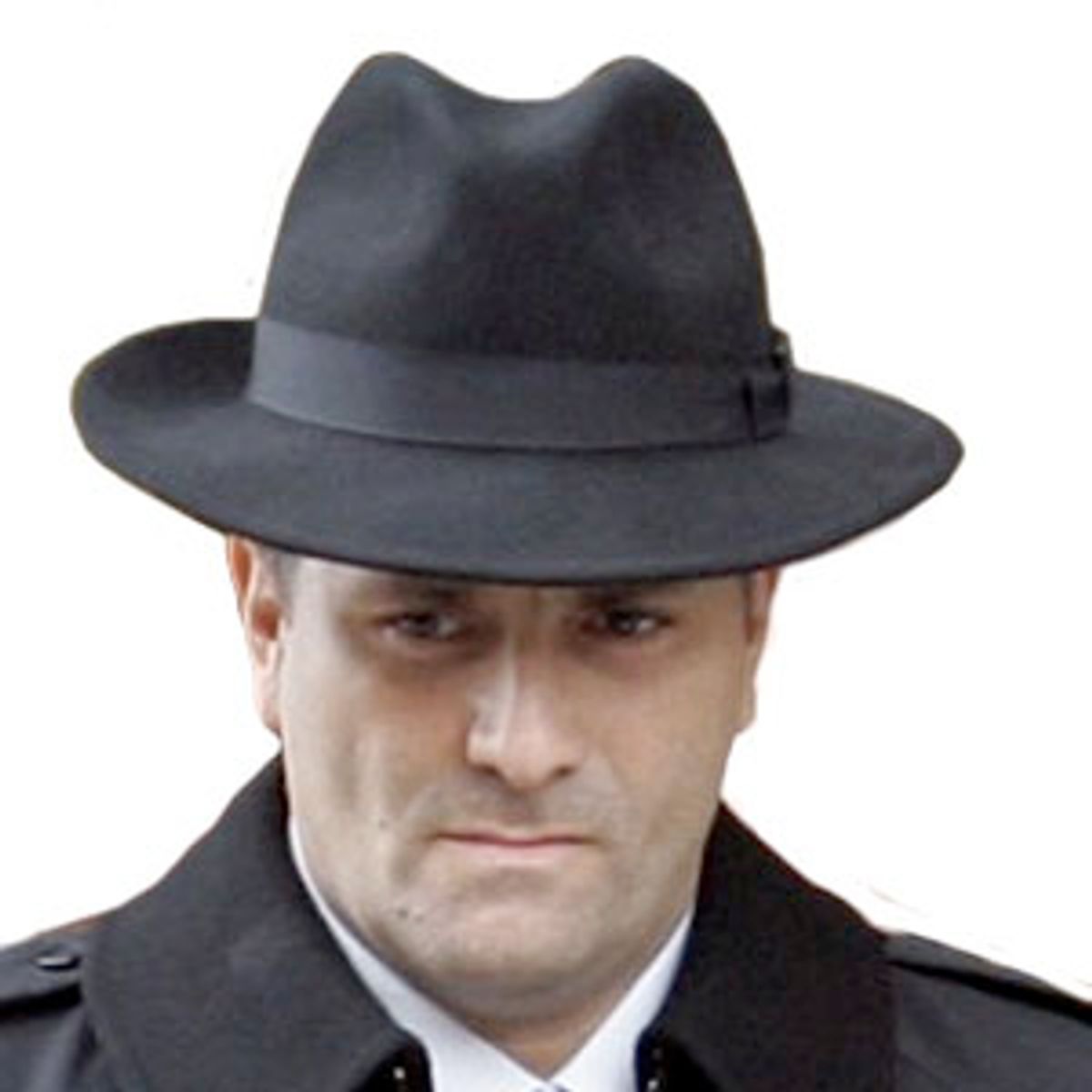 The picture of Jack Abramoff walking out of a federal courthouse on Tuesday wearing a distinctive fedora is by now iconic. And chances are, like Howard Fineman and Maureen Dowd, you thought he looked like a gangster. But that wasn't my reaction. What struck me was that Abramoff was wearing my hat, a Borsalino, the ne plus ultra of Yeshiva boy caps. Tucked tight on his head, pinched even, perfectly symmetrical (if a little deep for my taste), it was immaculate.

Maybe the contrition Abramoff expressed in his statements was real. Maybe he even recited "Baruch Dayan Emes," the blessing you make when you hear really bad news, after he went to court. Maybe he was wearing a yami (a diminutive yarmulke) underneath his fedora. While it's no secret that he's an Orthodox (if not Torah-observant, or frum) Jew, I've never seen a picture of him with either a Borsalino or yarmulke before. Why now?

As opposed to Abramoff, who I believe was raised frum from birth, I'm what is called a Baal Tshuva, a Jew who used to live a secular lifestyle, but now observes Shabbos (the Sabbath), keeps kosher, davens (prays) three times a day, etc. I wear my Borsalino every Shabbos, every Yom Tov (Jewish holiday), and at weddings and other special Jewish occasions. By wearing the Borsalino to court, I imagine that Abramoff was emotionally retreating into the safety of our insular world. I wonder if he read all the subsequent "gangster look" stories; maybe that's why he switched to the baseball cap yesterday?

When I become friendly with non-Jews, they inevitably ask, "Why do you guys dress like that?" My answer always surprises: At the end of the day, the hat is basically a fashion statement. Religiously speaking, a Borsalino or a black felt yami is equivalent to a baseball cap, but socially, it means everything.

Observant Jews are commanded to set themselves apart from non-Jews. Indeed, the Talmud mentions that one of the reasons we were redeemed from Egypt, despite our falling into the depths of spiritual decay, is that we kept our separate style of dress. Basically, how different we look is a sign of how connected or disconnected we are from the rest of society.

During the week, I dress in normal, "weekday" American clothes, except for my yarmulke and tzitzis (a T-shirt with strings on the bottom). On Shabbos, you'll catch me in the "I'm not a yeshiva boy but I play one on TV" look: black suit, white shirt, black felt yami under my Borsalino. Observant Jews are commanded to sanctify the Sabbath, to make it holy; this is one of the ways we do it. When you go to the synagogue and see 200 other men wearing pretty much the same uniform, it's quite powerful. We may look like clones but we're not. We feel as though we're part of a team, trying to bring the Creator's holiness down to this world.

It's a big step, putting on the hat for the first time as a Baal Tshuva. It's awkward. It's uncomfortable. You gain an extra four inches or so in height, so you bump into things you never did before. However, over and above any physical weirdness is the fact that you are clearly separating yourself. You're not like everybody else anymore. You really are frum now, or at least that's the way the rest of the world is going to see you.

For boys who are frum from birth, the hat is also a tremendously important cultural sign. A frum boy puts on his hat when he is bar mitzvah'd. He has to start putting on t'fillin (boxes worn on the arm and top of head that symbolize our connection to the Almighty) every weekday for the rest of his life; he has to fast on Yom Kippur, Tisha B'Av, and other holy days. According to Jewish law, he is a man. The hat shows that to the world.

That the world saw Jack Abramoff wearing this hat for the first time while admitting to such grievous transgressions, that much of the world will now associate this symbol of piousness with the gangster look, is a Chillul Hashem -- an act that shames the name of G_d.

Stephen Hirsch is a software developer in Passaic, N.J.