The Farrelly brothers' new comedy, "The Ringer," encourages us to yuk it up at people with mental disabilities. Is that OK? 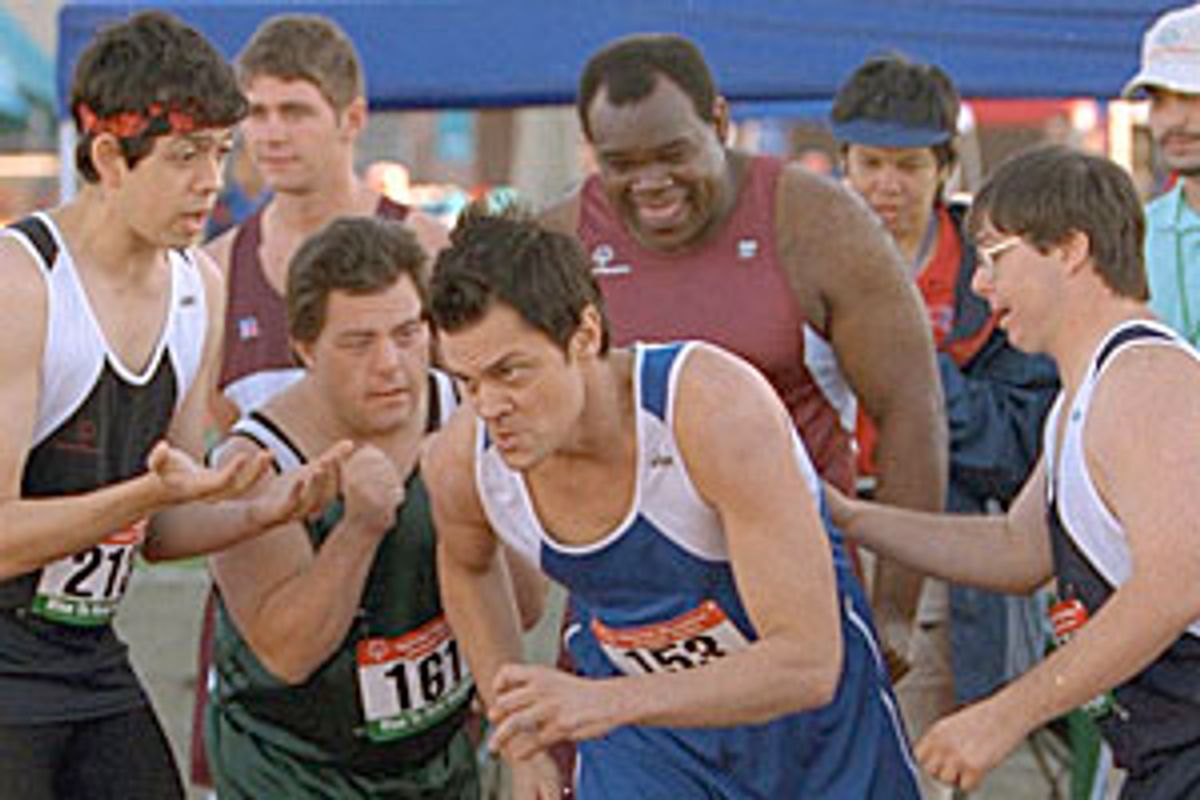 In "The Ringer," produced -- but not written or directed -- by Peter and Bobby Farrelly, Johnny Knoxville plays Steve, a perfectly normal, if loserish, guy who pretends to be mentally challenged so he can enter the Special Olympics. During the montage in which Steve tries to determine the most believably authentic length for highwater pants and practices a slew of artfully deconstructed bons mots ("Hi, I'm Jeffy and I can count to potato"), we know it's OK to laugh. But later, when Steve -- as his retarded alter-ego, Jeffy -- meets characters who really are mentally disabled (some of whom are played by professional actors and some of whom are mentally challenged in real life), the line between what's funny and what's outright insensitive becomes blurrier.

Is it OK to laugh when nonprofessional actor Edward Barbanell, as Steve's Special Olympics roommate Billy, stares at Steve in cartoonishly hostile disbelief just before accusing him, with the outraged seriousness of a grand inquisitor, of scratching a favorite CD? Or even at the way comic actor Jed Rees, as Special Olympian Greg, toddles through the movie with a stylized bowlegged gait, asking everyone he meets for a hug?

Comedy courts our submission and wears down our resistance; it demands that we live in the moment. But even though we all know that the very things we shouldn't laugh at are often the funniest, most of us have an ingrained system of checks and balances, a delicate but elaborate mechanism that kicks in just as we're about to laugh at something we know we shouldn't. "The Ringer" gives that mechanism an Olympian workout, asking us to do something our parents and teachers have taken great pains to condition us not to do: To laugh at -- or possibly with, but we're not quite sure -- the mentally retarded.

With gag after gag, by the time we've asked ourselves permission to giggle, the moment has sailed by. That lapse in response time, a hesitation just a beat too long, is usually the death of comedy, but in "The Ringer," each beat is loaded with at least one question and maybe two, or three, or 10: Why do we want to laugh, and why do we feel we can't? And why are we perfectly comfortable with so-called sensitive portrayals of the mentally challenged -- the childlike daddy played by Sean Penn in "I Am Sam," or Tom Hanks' simple but pure-hearted country boy in "Forrest Gump" -- in which characters are anointed with a desperate saintliness, as if their humanity weren't enough? Maybe the jokes in "The Ringer" that don't work tell us far more about ourselves than the ones that do.

Let's talk about one major problem right up front: How are we supposed to know whether it's OK to laugh at, or even with, the mentally challenged when few of us even know the correct word to use in identifying them? (An ignorance complicated, of course, by the many different types, and levels of severity, of developmental disabilities.) In "The Ringer," one character is rebuked for his careless and insensitive use of the noun "'tard," which we all recognize (or should recognize) as a no-no. But past that point, we're on shaky ground.

We're perhaps not supposed to use the adjective "retarded," although the New York Times, that bastion of good taste and propriety, does, so the rest of us wonder, timidly, if we can, too. What about "mentally disabled" or "mentally handicapped"? No good because they stress limitations, not capabilities. Supposedly, the adjective "special" is universally acceptable, which makes sense, possibly, if we're talking about kids. But when we're talking about adults, isn't the word "special," with its aura of singsong condescension, insensitive if not outright insulting? These could be people with jobs, a sex life, a distinct and surprisingly sophisticated sense of humor, yet they're doomed to eternal infantilization. When I was in Catholic grade school, in the 1970s, I remember a nun telling us that children born with Down syndrome were a blessing to families, because they stayed refreshingly "childlike" all their lives. Although I couldn't articulate it at the time, the burden of being beatific for a lifetime, just because you were "born that way," seemed an unbearably heavy one for any human being, challenged or otherwise.

"The Ringer" is an odd and not wholly successful little comedy. Its pacing is slack, and although it has a gentle heart, it treads so gingerly across the minefield of potential offensiveness that it sometimes snuffs out its sparks of life as quickly as it throws them off. This is a nervous little picture: The Farrellys, along with the movie's director, Barry W. Blaustein, and writer Ricky Blitt, worked hard to earn the endorsement of the Special Olympics, and their anxiety vibrates right off the screen and out to the audience.

But I think that quivery aura of anxiety, rather than the gags themselves, are what's most arresting about "The Ringer." This is a movie that repeatedly throws us off our game, challenging our very passivity as moviegoers at a comedy. We show up wanting to be entertained and to go home happy; but the terms of our enjoyment are predicated on our being able to do something we've been conditioned not to do -- to laugh at the retarded.

In Variety, a Special Olympics spokeswoman said that the organization endorsed the movie to help dispel negative stereotypes, especially among younger moviegoers. But there's no strict negative or positive in "The Ringer" -- the picture simply takes place in an alternate universe of being. There are glints of subversive brilliance in the ways the movie isn't funny. For one thing, many of its gags are keyed to the rhythms of its mentally challenged characters -- rhythms that may not necessarily match ours -- and some of the non sequiturs carry a gleam of dada brilliance.

At one point, Jeffy and his new friends leave the Olympic dorm to sneak out to the movies, where they run into David (Zen Gesner), the boyfriend of one of their favorite Special Olympics volunteers, Lynn (Katherine Heigl). David is cheating on Lynn, and having caught him in the act, the guys blackmail him into driving them back to the compound. But Lynn catches them as they try to sneak back in, and David concocts a story about having taken the guys out for ice cream. A kid in the group, Winston (played by actor Geoffrey Arend), loudly challenges the ice cream ploy, asserting there was no ice cream to be had. The scene winds down, with David unable to wriggle out of his predicament, but Winston, persistent in his need to unravel the logic behind the lie, delivers the coda: "When did we get ice cream?"

But the timing of some of the nonprofessional actors is even more astonishing, and weirder. Nicole E. Bradley plays Yolie, a young woman whom Lynn is trying to fix up with Jeffy. She sits at the dinner table, bored and visibly offended when the unctuous David tries to entertain "the kiddies" with a dumb preschoolers' joke -- she rolls her eyes with the insouciant indignation of Jack Benny looking toward heaven for relief. And in one vivacious little scene that suggests mental challenges aren't just for the mentally challenged, Jeffy/Steve has to use a blackboard to explain who he is and why he'd stoop to impersonating a disabled person to get into the Special Olympics. (The explanation involves a crooked uncle and the sewing-on of a very nice man's fingers, lost in a lawn-mowing accident. You'd need a blackboard, too.) As Jeffy/Steve launches into this convoluted explanation, his new friends stare at him as if he were an alien being -- and he is. The movie sets Jeffy/Steve up as the outcast whose mode of thinking is at first incomprehensible, and completely unacceptable, to his peers.

Like nearly all Farrelly brothers projects, "The Ringer" challenges us to define our attitudes toward people who are "not like us" and demands that we at least recognize the shaky line between compassion and condescension. Movies and TV shows that attempt to grapple, at least in some way, with the role of the disabled in our society are becoming less of a rarity. Penelope Spheeris' "The Kid & I," written by Tom Arnold (he also stars in the picture) and released last month, deals with the Hollywood dreams of a kid with cerebral palsy (played by Eric Gores, who has cerebral palsy in real life). And in a 2004 episode of "South Park," Eric Cartman pretended to be mentally challenged so he could compete in the Special Olympics and win a thousand bucks -- a story line that led to charges, among clueless bloggers and others who don't understand the realities of movie production, that Blitt and the Farrellys had stolen the idea from "South Park" masterminds Trey Parker and Matt Stone. (And an unfortunate reality of the entertainment marketplace is that whenever two works on the same subject appear at nearly the same time, the second one is almost always deemed inferior before people have even seen it.)

But in Variety last month, Peter Farrelly charged that the theft had gone the other way around: "There is no way those guys didn't know we were making this very movie as they took it upon themselves to do that episode ... These are guys I have always respected, but what they did was very creepy." Blitt began developing the idea seven years ago and had shopped it around before the Farrellys became attached to it. "When you think of a premise so radical it's unmakable, you hang in for seven years to see it through, it is a shock to the system to have people on Web sites saying, 'You hack, you stole this from 'South Park,'" Blitt told Variety.

Parker and Stone insist they came up with the idea on their own, and while the episode in question -- "Up the Down Steroids" -- is typically funny and irreverent, it doesn't burrow as deep, or hit as hard on the rebound, as "The Ringer" does. And while few critics seem to have any patience at all for Johnny Knoxville as an actor, I believe his performance here rips the curtain off the phoniness of those portrayals of the mentally challenged that are so often heralded as "great" and "brave" -- the Penn and Hanks performances I mentioned earlier, as well as Dustin Hoffman's in "Rain Man" (all three of which are alluded to in "The Ringer").

Knoxville's Jeffy, his hair a tousle of butch-waxed cowlicks, his pants hiked so high they demand a new definition of the term "waistband," plays a cartoon idea of a mentally challenged man -- the performance is less a reflection of reality than a way of pouring our perceived reality into a physical form. Jeffy's limbs twist into unlikely, awkward contortions; his words tumble out in outlandish combinations that are both more clever, and less funny, than those of his new pals; he mugs and grimaces when he deems it appropriate. Little wonder Steve/Jeffy's supposedly "slow" colleagues cotton on quickly to the inconsistencies in his mannerisms, seeing through the cracks of his performance. Steve breaks his façade and starts talking to them straight, like the grown-ups that they are, and they respond to him with more understanding, and greater inherent humor, than he would have thought them capable of. Knoxville's performance knocks the wind out of the supposedly great achievement of "playing retarded," and it's just one way in which "The Ringer," for all its glaring flaws, pulls the rug out from under us. Steve steps outside his performance as Jeffy, only to realize how wrong he'd gotten it. The only thing left for us to do is laugh.