Who were the women who most profoundly influenced the legendary composer? At the 250th anniversary of his birth, we find out. 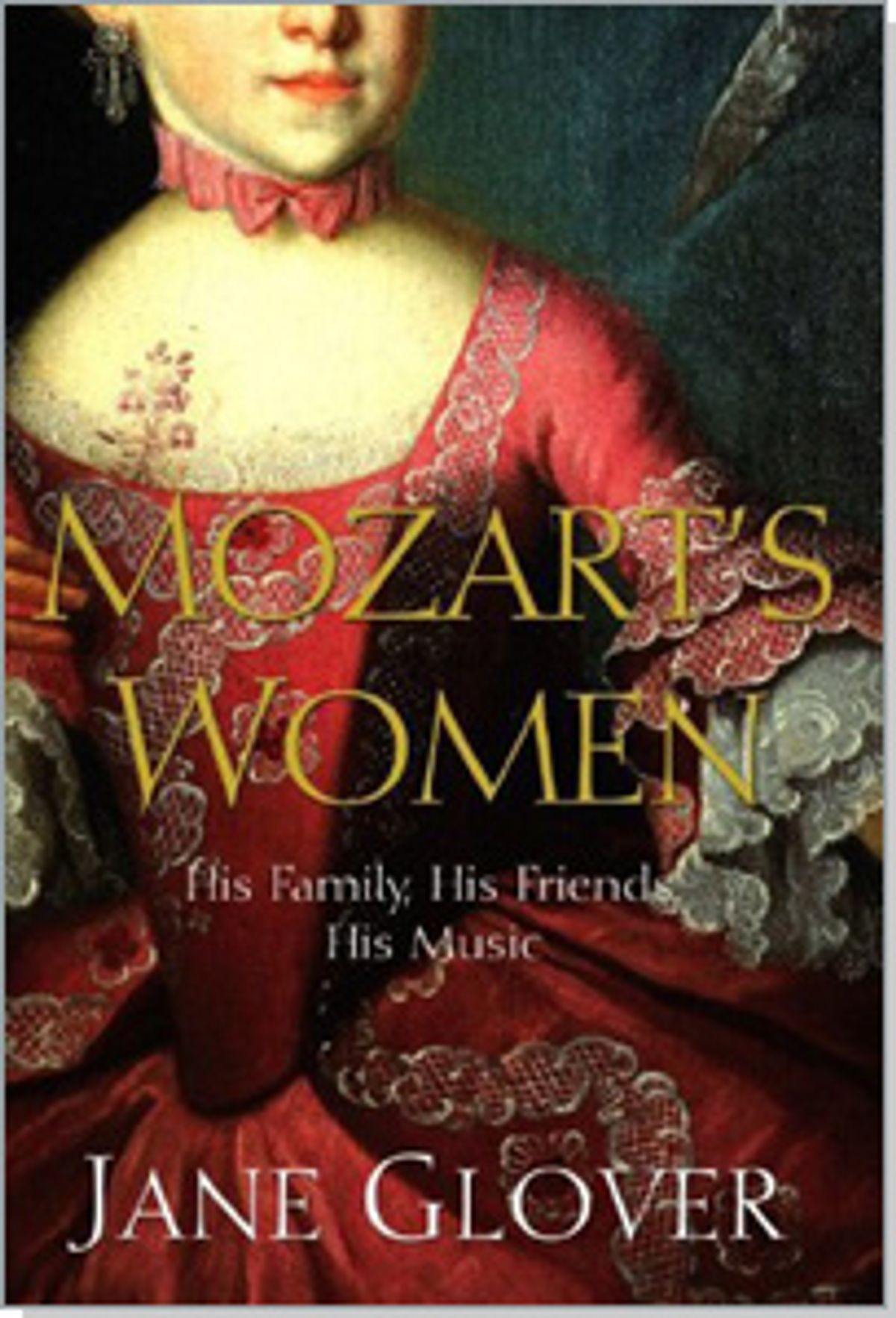 With the 250th anniversary of Mozart's birth upon us, expect more "Eine kleine Nachtmusik" ring tones, Wolfie bags, coffee mugs, T-shirts and Mozart Kugels than you can shake a stick at. There'll be a deluge of hastily slapped together CD compilations as well, of which I can recommend most anything on DG, London, Decca or Phillips. (Personally, I go in for "historical" or "vintage" recordings, Beecham, Brain, Furtwangler, Gieseking, Klemperer, Schnabel, Schwartzkopf, Serkin, et al.) As for the "Authenticity/Original Instruments" movement -- the reigning orthodoxy of the last 40 years -- it's trial and error mainly, the label "authenticity" often being used to cloak indifferent or uncertain playing; William Christie's "Les Arts Florissant," saccharine-sounding at best, springs to mind. Yet, to be fair, Raymond Leppard's recording of the "Mass in C Minor" is a must have.

The real challenge lies in the literature. Save for Richard Wagner, Mozart's polar opposite, there are more books on Mozart than on any other composer. As with other supremely great artists -- think Leonardo or Shakespeare -- almost every succeeding generation has reinterpreted Mozart to suit itself; autres temps, autres moeurs. Latter-day scholars, echoing authenticity in performance, have sought to demystify Mozart, i.e., they've ditched idolatry for idol smashing. Goodbye, Divine Mozart, Prince of Spirits; hello, jobbing musician, earthbound mortal. You'd think Mozart was on tenure track.

This approach peaked with Maynard Solomon's "definitive" "Mozart: A Life" (1995), which displaced the incumbent bio, "Mozart: His Character, His Work" by Alfred Einstein (yes, distant cousin of that Mozart-loving violinist Albert), admittedly past its sell-by date but a serviceable text nonetheless. I picked up Solomon's "Mozart" with much foreboding, having despised his earlier tomes on Beethoven and Schubert. Thankfully, the Marxist-Freudian claptrap that marred those works was muted here; the musicological mandarin of New Haven was on his best behavior and produced a model academic work: detached, scholarly, well researched, but dry as dust if not a bit boring. Wiser choices are Robert Gutman's "Mozart: A Cultural Biography" (1999) and the late Norbert Elias' "Mozart: The Sociology of a Genius" (1990). Elias' jargon-free study has the added attraction of being brief but broad in its survey, as is Peter Gay's "Mozart" (1999).

A rear-guard action was fought by the late Wolfgang Hildesheimer, Nuremberg interpreter, painter, Theatre of the Absurd playwright, and novelist, in his speculative bio "Mozart" (1977), which largely did away with the hero worship of 19th century Romanticism and the soppy excesses of "sweetness and light," leaving Mozart's essentially enigmatic nature sketched out in high relief. Of the dozen and more bios and studies I've read down the years, Hildesheimer's is easily the best and most thought-provoking. Last, and certainly least, there's Peter Shaffer's execrable play "Amadeus," a "musical," as a talented pianist friend of mine (who studied with a student of Schnabel's) generously described it, that has become Mozart's image in the popular imagination.

What nearly all his chroniclers have had in common, however, is that they've drawn from two sources of Mozartiana, one stemming from Mozart's wife, Constanze Weber, the other from his sister, Nannnerl. There are also the letters, indispensable for any serious Mozart lover, that prove, to me at any rate, that had Mozart been inspired by the muse of Thalia instead of Terpsichore he might very well have become a brilliant fantasist ` la E.T.A. Hoffmann. He handled words the way he handled musical notes, with a spellbinding accuracy and taste ("Too many notes, my dear Mozart" -- "Just as many as are necessary, your Majesty"), effervescence and verve. Of the many editions of correspondence available, I recommend the latest, "Mozart's Letters, Mozart's Life," selected, edited and newly translated by Robert Spaethling (2000).

To say, then, that a book like Jane Glover's "Mozart's Women: His Family, His Friends, His Music" is long overdue would be an understatement, given the profound influence Constanze and Nannerl have had on the tradition. I, for one, have always wondered how Nannerl fared after her career was sidelined to advance her brother's. Excepting key figures such as Lorenzo Da Ponte, Mozart's best librettist and brother freemason, and Joseph Haydn, of course, the afterlives of those close to Mozart -- lovers, friends, relations, business associates, fellow musicians -- have been overshadowed, understandably so. (Da Ponte's memoirs were reissued by the New York Review of Books press in 2002.) Luckily, Glover is more than up to the excavation, being a conductor, BBC presenter and producer, journalist and author.

Glover's book, divided into four parts, deals with Mozart's immediate family, his in-laws, other women -- singers mainly, not mistresses (a terrible flirt, Mozart stopped short of cheating on his wife) -- and, finally, the lives of the Weber sisters and Nannerl after his death. Mozart's closest childhood relationship, practically symbiotic, was with Nannerl, his senior by five years, with whom he performed onstage. Child performers have always had novelty value, and the precocity of Wolfgang and Nannerl carried them far beyond their native Salzburg, playing before the crowned heads of Europe, from Vienna to London and points in between. In this relentless touring -- "begging expeditions," as Mozart's harshest patron, Archbishop Colloredo, later called them -- they were driven by the firm hand of their ambitious father, Leopold, a minor composer and teacher who lived by his wits. (His "Toy Symphony," a charming piece of birdcalls and sleigh bells, is still played around Christmastime.)

If Leopold was the dominant note in their lives -- "After God, Papa," little Wolfgang would avow to his sister -- their mother, Anne Marie, hovered in the background, dutiful and self-sacrificing, always there for them but often taken for granted. Like cats that come in pairs, Wolfgang and Nannerl were company enough for one another, living in a world of their own, the Kingdom of Back (back of a coach, that is). It was clear by the time Mozart was 6 that he was more than just another talented child performer. One witness wrote:

"[T]he two children, the boy and the girl, both play the harpsichord, or the clavier, the girl, it is true, with more art and fluency than her little brother, but the boy with far more refinement and with more original ideas, and with the most beautiful inspirations, so that even the most excellent organists wondered how it was humanly possible for such a boy, who was already so good an artist at the age of six, to possess such art as to astonish the whole musical world."

By adolescence Mozart was the family breadwinner, a genius recognized by no less than Haydn himself, who exclaimed to Leopold, "Before God and as an honest man, I tell you that your son is the greatest composer known to me." Nannerl stayed at home, and after Anne Marie died and Wolfgang went off to Vienna to seek his fortune, she had the unenviable task of looking after Leopold. At 33, considered very late then, she married a cold, uncommunicative military officer, twice widowed and with children who disdained the interloper. The rest of her long life makes for painful reading; she did not even have the consolation of music, her clavier being useless in the damp climate of her husband's isolated eyrie village; she grew embittered with age and lived in poverty after his death. Though she remained close to Wolfgang and was proud of his successes, distance and the pressures of his hectic Vienna schedule meant that they gradually lost contact, another blow. Were it not for the good offices of Constanze, who began to prove herself an astute businesswoman near the end of Mozart's life, Nannerl would have died destitute and forgotten.

Over Leopold's furious objections, Mozart married Constanze Weber on the rebound, having been rejected by her sister, Aloysia, a sumptuously talented singer, one of the greats of the period. (The part of Anna in "Don Giovanni" was written specifically for her, as were a number of his best songs.) Until recently, Constanze has been the victim of bad press, depicted as a wanton, unfaithful hussy -- with Salieri, among others -- ignorant and, worst of all, a lousy hausfrau. All untrue, according to Glover. She was in fact ideal for him: clever, imaginative, resourceful (she needed to be; Mozart was a spendthrift bent on keeping up appearances), accustomed to the hurly-burly of family life (there were four Weber sisters, all musical, like their parents, like the Mozarts), and responsive to his touch; sexually speaking, Mozart liked the kind of woman one used to refer to as a "good sport," like his lively, vivacious cousin Bdsle. Of their seven children, two sons survived: Carl, who became a prosperous businessman in Milan, and Franz Xavier, who traded in on his father's name and became something of a musical curiosity. Both died without issue, ending the Mozart line. Constanze also took charge of keeping her husband's legacy alive, finding publishers for his work, commissioning the first biography, collecting due royalties and distributing them equitably. Not only did she ease Nannerl's final years, she also came to the rescue of Aloysia when Aloysia's career faded and she fell on hard times. The more I read about her the more I like her!

Mozart's other women were singers mostly, and here Glover's expertise goes into overdrive, detailing at numbing length the production values behind each and every opera, however minor, Mozart created. Most of his mature work was written to order, and Glover reveals how Mozart crafted a piece to fit the particular strengths, weaknesses and eccentricities of a given performer. What mattered in the end was showing off the music and its performers in the best possible light. Unlike most composers, who see performers purely as vessels for their self-expression -- think Wagner -- Mozart was the epitome of artistic courtesy. One comes away feeling, as W.J. Turner ("Mozart: The Man and His Works," 1938; an elegiac, humanist biography written as darkness fell across Europe) did, Mozart's unfailing, universal sympathy, the modesty of natural genius, qualities he shares with Shakespeare, or Chekhov.

My only complaint with Glover is her nitpicking with Leopold. She gives the old man stick every chance she gets, as if she's getting her own back on behalf of Anna Marie and Nannerl. Mind, her perspective is that of a comfortably middle-class, 21st century North Londoner, a world and status away from an itinerant 18th century Austrian musician just trying to make ends meet. It's no secret that Leopold was a difficult man, irascible, a braggart and embroiderer of the truth, an overbearing stage mother, if you like, but he was not a drunken, wife-beating brute like Beethoven's father. He was the guardian of God-given genius; once he knew what he had on his hands, he sacrificed everything, including his own career, for the sake of his son, pulling strings, giving advice, shepherding a high-spirited, sometimes too trusting lad in the cut and thrust of the real world, doing everything within his power to land him the secure position he never quite landed for himself, for a Mozart only comes along once in a hundred years. All things considered, he did an outstanding job.

Let me finish this labor of love the way Glover does hers, allowing Geliebte Amadi to speak for himself: