We shall overcome ... liberals 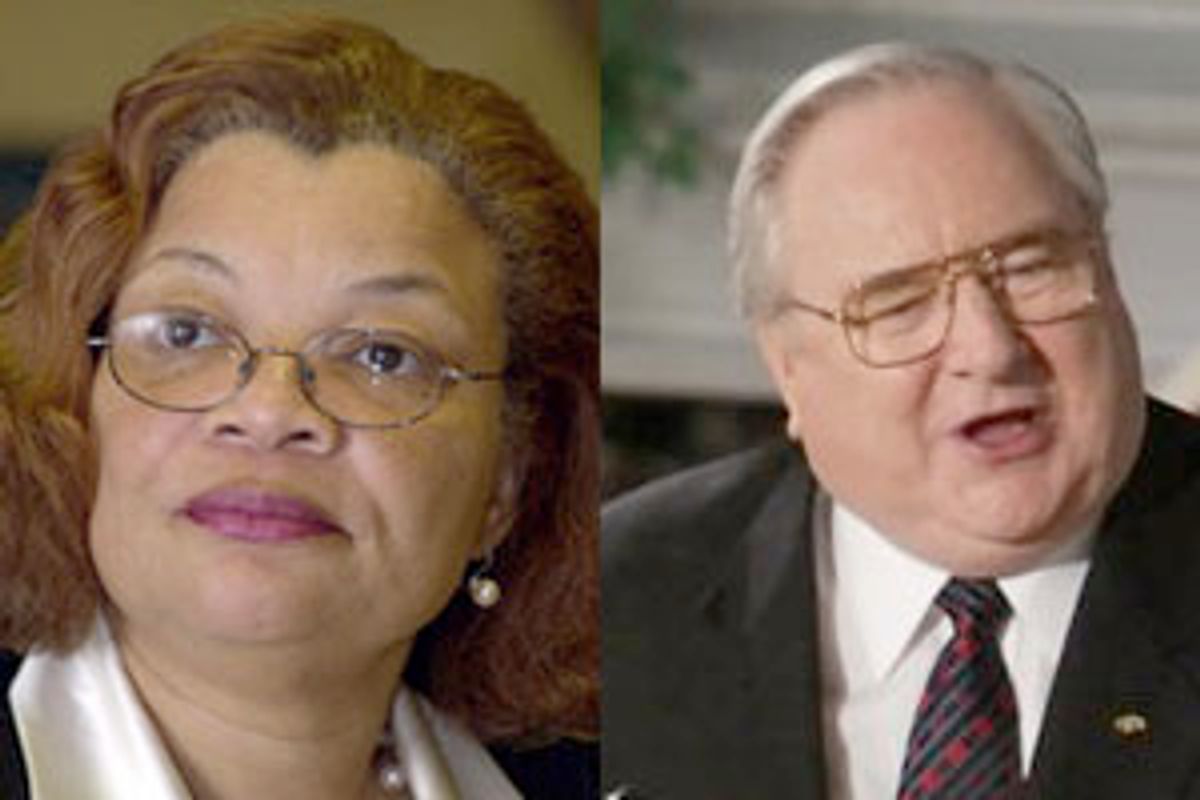 A time traveler from the civil rights era would have been flabbergasted at Justice Sunday III last night. The third of the Family Research Council's nationally televised rallies to proclaim God's support for Bush's judicial nominees was held at Greater Exodus Baptist Church, an African-American congregation in downtown Philadelphia, and it roared with full-throated gospel and foot-stomping enthusiasm. Martin Luther King Jr. was invoked over and over -- his niece, Alveda King, a frequent presence at religious right confabs, summoned the memory of Rosa Parks and sang a yearning version of "We Shall Overcome."

But what Alveda King and the other participants at Justice Sunday ached to overcome wasn't discrimination or poverty or disenfranchisement. Rather, they spoke of overcoming decades of progressive jurisprudence -- the very jurisprudence that provided legal support to the civil rights movement. They spoke of overcoming opposition to Bush's Supreme Court nominee Samuel Alito, a man who has demonstrated hostility to past Supreme Court decisions protecting voting rights, and who belonged to Concerned Alumni of Princeton, a group that sought to limit the number of women and minorities at the university. ("A student population of approximately 40 percent women and minorities will largely vitiate the alumni body of the future," said one of its brochures.)

Greater Exodus Baptist Church is pastored by the Rev. Herb Lusk, a charismatic former tailback for the Philadelphia Eagles and one of Bush's staunchest backers among black clergymen. Lusk, who endorsed Bush from his church via video at the 2000 Republican National Convention, has been awarded more than $1 million in grants under the president's faith-based initiative. In Lusk's view, the central divide in American life is not racial or economic but religious. Decrying "discrimination against people of God," he bellowed: "My brothers and sisters, I will not go down without a fight!" The largely black audience jumped to their feet, cheering and clapping. "Be careful how you fool with the church!" Lusk thundered. "Don't fool with the church because the church has buried many critics. All the critics we have not buried, we're making funeral arrangements for!"

Laughter resounded in the high-ceilinged, baby-blue room. Behind Lusk, several throne-like white chairs, upholstered in dark red, were arranged in a circle. Perched in them were Justice Sunday III's featured speakers -- Sen. Rick Santorum, James Dobson, Jerry Falwell, Bishop Wellington Boone (a leader in the Promise Keepers) and Alveda King. They were flanked by two flags -- the stars and stripes on one side, and the Christian flag, white with a red cross on a blue field, on the other. The event was simulcast to viewers all over the country watching at churches and at home on Christian television.

The entire evening had a surreal, upside-down quality, as if history had been caught in a whirlpool and come back all jumbled. Appearing via video, David Barton, a theocratic revisionist historian, invoked the words of Thomas Jefferson to argue that the founders intended for religion and government to be intertwined. ("I tremble for my country when I reflect that God is just," he quoted, not bothering to mention that Jefferson was talking about the sin of slavery, not secularism.) A cast of white conservatives, several with past links to racist groups, presented themselves as heirs to the preachers who led the fight against segregation. The moral authority of the black church was invoked against the judges who have most fervently defended civil rights.

This was particularly audacious given that racial issues could play at least as large a role as abortion in the battle over Alito's confirmation. In a 1985 application to become deputy assistant attorney general in the Reagan administration, Alito wrote, "In college, I developed a deep interest in constitutional law, motivated in large part by disagreement with Warren Court decisions, particularly in the areas of criminal procedure, the Establishment Clause, and reapportionment."

The Warren court's reapportionment cases determined that voters must have equal representation; prior to them, there were vast differences in the population of legislative districts, often resulting in the dilution of black voting power. Delaware Sen. Joseph Biden has said he'd consider filibustering over Alito's views on reapportionment.

Alito's interpretation of civil rights law is also controversial -- as the Washington Post wrote in an editorial, "In several prominent cases, Judge Alito has displayed a more skeptical attitude than have his colleagues toward claims of race and gender discrimination and has tended to embrace narrow readings of important federal anti-discrimination laws."

Nevertheless, Justice Sunday III speakers presented a potential Alito confirmation as an unparalleled triumph for both black and white believers. "What we have worked on for 30 years is coming to culmination, consummation right now," said Jerry Falwell. "We were able to hold off Michael Moore, most of Hollywood, most of the national media, George Soros, and the Kennedys and other crowds who fought so fiercely against the reelection of George Bush. And now, now we're looking at what we really started on 30 years ago -- a reconstruction of a court system gone awry."

Today, conservatives excoriate the Supreme Court for banning school-sponsored Bible reading and prayer. But the high court first earned right-wing ire by declaring segregation unconstitutional in 1954's Brown v. Board of Education. Responding to Brown, conservatives then fulminated about "judicial tyranny" and launched campaigns to have Warren impeached. Southern white religious leaders denounced the civil rights movement; in 1958, Falwell delivered a sermon titled "Segregation and Integration: Which?" He argued that the latter would lead to the destruction of the white race.

And yet there was Falwell at the pulpit of a predominantly black church, speaking of Supreme Court reconstruction as the common project of Christians of all races. With only a few hundred people in the packed house, Greater Exodus Baptist Church is smaller and more modest than the sprawling suburban megachurches that hosted the previous two Justice Sundays, but it served as a grander backdrop, imbuing the proceedings with a soulful authenticity meant to negate criticisms of Judge Sam Alito's civil rights record.

Never mind that host Tony Perkins, head of the Family Research Council and Justice Sunday III's host, once paid Ku Klux Klan Grand Wizard David Duke $82,500 for his mailing list. Or that, in the early 1990s, David Barton spoke to at least two major Christian Identity gatherings -- Christian Identity being a white supremacist sect that believes blacks to be "mud people" and Jews the spawn of Satan. (Today, Barton is vice president of the Texas Republican Party and one of the most important purveyors of the revisionist notion that America was founded as a Christian nation, only to be subverted by God-hating secularists peddling the false doctrine of church-state separation. He was featured in several video segments at Justice Sunday III, and Falwell referenced his arguments.)

It's a little surprising that Santorum would place himself in such company. Facing a difficult reelection campaign, he's recently made efforts to distance himself from some parts of the religious right; once a major supporter of intelligent design, Santorum has since said it shouldn't be taught in science classes and has resigned from the advisory board of the Thomas More Law Center, the conservative Catholic legal group that represented the anti-evolution school board in Dover, Pa.

But at Justice Sunday III, Santorum was in full culture-warrior mode. "Extreme liberal judges," he said, are "destroying traditional morality, creating a new moral code, and prohibiting any dissent." He continued, "The only way to restore this republic our founders envisioned is to elevate honorable jurists like Samuel Alito."

Santorum warned that Democrats would try to thwart this noble goal by dragging the Alito hearings "into the gutter, so they can continue their far-left judicial activism on the Supreme Court." Will you, he implored the audience, stand by and watch the destruction of the Constitution? "If your answer is no, then join me and make sure the answer is yes on Judge Samuel Alito." In other words, to question Alito's commitment to civil liberties is to acquiesce in the destruction of liberty. To examine his record on civil rights is to invite tyranny.

As the event ended, 50 or 60 clergymen, black and white, came to the front of the room and joined hands in prayer. "May not secularization or unbelief prevail against your word," one said. Perkins looked approvingly at the assemblage. "Black Americans, white Americans," he said. "Christians, standing together."