Republican Rick Pombo wants to drill, mine and develop America down to the last acre. But will close ties to Tom DeLay and Jack Abramoff pollute his reelection chances? 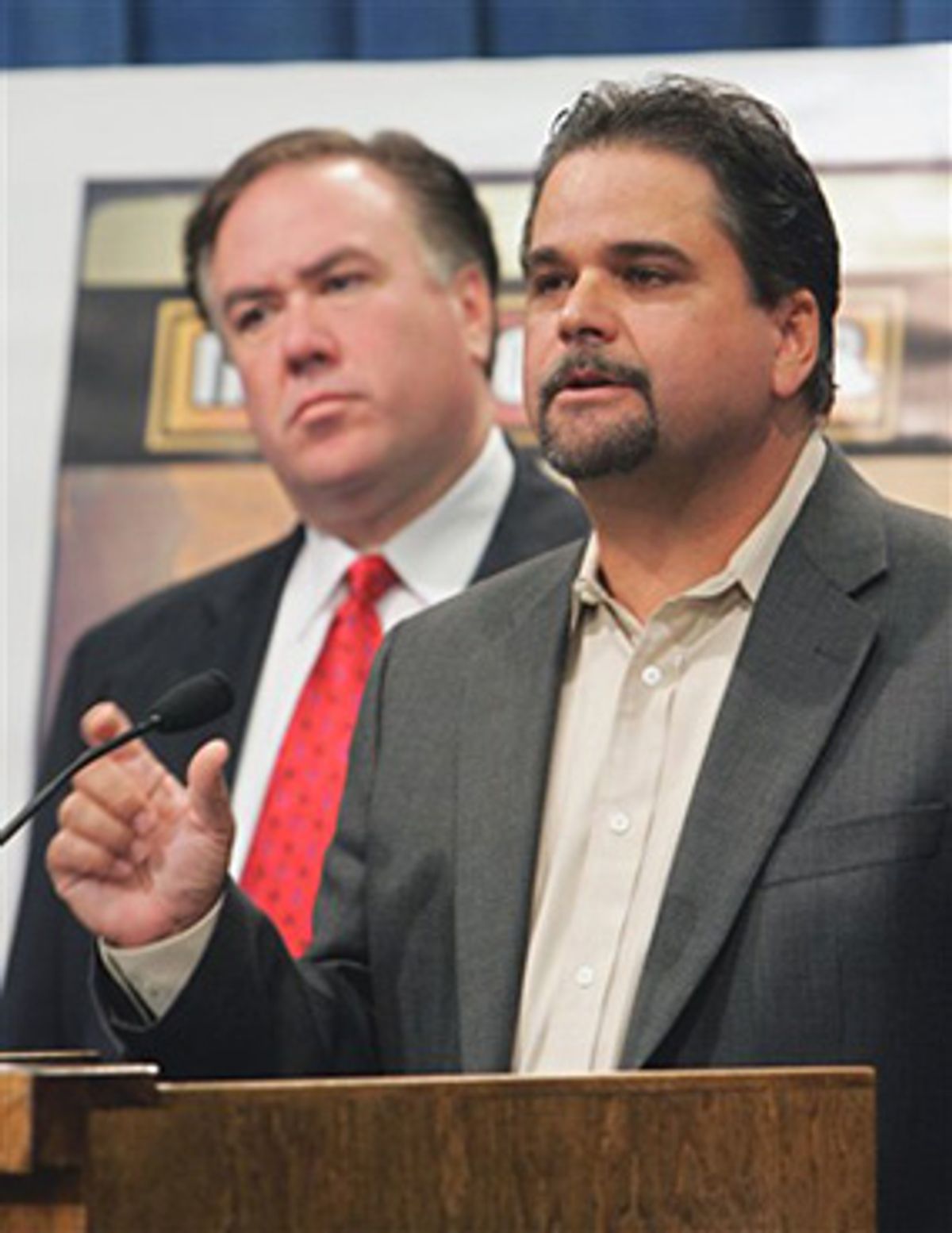 Just a week into this election year and already environmental strategists are up to their elbows in plots to snatch Congress from the grip of anti-environment GOP leaders and turn it over to a conservation-minded majority.

But an even bigger priority for enviros is thwarting the reelection of Rep. Richard Pombo, R-Calif., chair of the House Resources Committee and a zealous advocate of major environmental rollbacks -- among them, weakening the Endangered Species Act, drilling in the Arctic National Wildlife Refuge and the outer continental shelf, selling off national parks and monuments, and changing mining law to allow thousands or even millions of acres of public land to be transferred into private hands.

"Pombo hasn't met a part of the country that he doesn't want to drill, mine or develop," says Mark Longabaugh, the former political director for the League of Conservation Voters who is now spearheading a Defenders of Wildlife campaign against Pombo. "He tops the list of history's most ruthless environmental bad boys." But Pombo's transgressions, eco and otherwise, are catching up with him, Longabaugh says: "He's gotten himself mired in a number of ethical dustups, and this year faces the most difficult election of his career."

That's not to say defeating Pombo will be easy -- quite the contrary. This former rancher has represented California's 11th congressional district -- composed largely of conservative ranching and agricultural communities -- for more than a dozen years, and in recent elections has won with about 60 percent of the vote.

"Pombo's chances of reelection look fairly good at this point," says Amy Walter, who covers House elections for the nonpartisan Cook Political Report. "His district is mostly rural and Republican leaning, certainly not a Democratic swing district. Ousting any incumbent who has served seven straight terms is an uphill battle."

Pombo also has support from the Bush administration on a number of his legislative proposals and has come to be seen as a golden boy by Republican ideologues. Three years ago, he leapt over more senior colleagues to take the helm of the House Resources Committee thanks to strong backing from then-House Majority Leader Tom DeLay, R-Texas.

Of course, Pombo might not be bragging about that connection these days, with DeLay awaiting trial on charges of laundering campaign money and trying to explain away his close ties to former high-flying lobbyist Jack Abramoff, who recently pleaded guilty to fraud and conspiracy charges. And Pombo has some explaining of his own to do: He received more than $35,000 in donations from Abramoff and his Indian-tribe clients between 1999 and 2004 and has been accused of letting that influence his committee dealings.

Pombo's critics are making hay out of these developments. "Abramoff embodies the culture of corruption in Washington, and clearly Richard Pombo is very much tied into that culture," says Sarah Feinberg, a spokesperson for the Democratic Congressional Campaign Committee.

Critics also point to Pombo's alliances with industry. According to the Center for Responsive Politics, he has taken more than $223,890 in campaign contributions over the course of his career from real estate developers, who would stand to benefit if his rewrite of the Endangered Species Act becomes law. He's also a big beneficiary of contributions from oil and gas companies, which channeled more than $85,000 into his last campaign, and he's seemingly repaid the favor by aggressively pushing for more public land to be opened to drilling. High Country News reported last year that in 2003 and 2004, Pombo's committee staff enjoyed extravagant travel sprees funded by industry interests, including Shell Oil and the American Gas Association, with expenses totaling $152,000 -- more than double what was spent on committee staffers in the preceding two years under the previous committee chair.

Pombo has also raised some eyebrows with the use of his campaign funds and his leadership PAC, dubbed Rich PAC -- shorthand for "Richard," but heavy with irony given Pombo's reputation as an industry crony and master fundraiser. He paid his wife and brother a whopping $465,000 out of his campaign war chest between 2001 and 2004 for services described simply as "fundraising," "bookkeeping," and "clerical," according to High Country News.

The DCCC polled Pombo's district in spring 2005 and found that only 32 percent of respondents definitely planned to vote for him. "The other 68 percent said they would either vote to replace him, consider voting for someone else, or simply weren't sure," says Feinberg. "We absolutely think he's vulnerable." Longabaugh thinks demographics may also be working against Pombo, as parts of his district are shifting from rural to suburban, attracting people from the San Francisco Bay area to the west.

Pombo's office did not respond to Muckraker's requests for comment.

Duvall is currently spearheading a high-priority Sierra Club effort to publicize Pombo's environmental record. "It is our No. 1 public outreach campaign for spring and summer," she says. "We are also researching and laying the groundwork for a potential political campaign in the fall."

Defenders of Wildlife is moving aggressively with its own education-outreach project, which includes the Pombo's in Their Pocket Web site, alleging that the rep has a quid pro quo relationship with his corporate contributors. Defenders of Wildlife has also been running print and TV ads in Pombo's district over the last two months, criticizing his assault on the Endangered Species Act and his proposal to sell off national parks, and the group has more ads in the pipeline. "We will very likely lead an aggressive campaign against Pombo to put an end to his legislative assaults," Longabaugh says.

Sierra Club and Defenders are in discussions about pulling together a coalition of at least half a dozen environmental groups that would pool resources to hire organizers and canvassers for Pombo's district. "We are anticipating that by this spring we could have political organizers in the field," says Longabaugh, who's been in California this week surveying the scene.

Insiders predict that the total spending on the battle for Pombo's seat -- including the representative's own spending and money from outside groups -- could exceed $5 million, with more than $1 million coming from the environmental community. As of September, Pombo had raised $713,430 for the campaign.

Even as enviros mount their opposition to Pombo, they still have no clear challenger to endorse. According to Feinberg of the DCCC, the leading Democratic candidate at the moment is Steve Filson, a former Top Gun-style Navy pilot and now a commercial pilot and active union member -- but he's never held political office. Another potential Democratic contender is Jerry McNerney, an energy consultant and entrepreneur, also with scant political experience.

"I'm not convinced that there is a Democratic candidate experienced enough to defeat this highly visible incumbent," says Walter of the Cook Political Report.

But Pombo may find himself battling a Republican challenger as well. Former Rep. Pete McCloskey, R-Calif., an architect of the Endangered Species Act who served 16 years in the House until 1983, announced in September that he's trying to recruit a moderate Republican to defeat Pombo in the June primary -- and, if he can't find someone, McCloskey is considering stepping up to the plate himself. A septuagenarian, he's said he's too old to be elected again, but is willing to run simply to expose Pombo's extremism.

"It's another signal of how radical Pombo has gotten if he's inspiring fellow members of the GOP to run against him," Longabaugh says.

Still, Walter doesn't believe there's enough public outrage over Pombo's environmental record to make a significant difference. "In order to defeat Pombo, you'd have to convince voters that he's not the man they thought he was in the last seven elections," she says. "His environmental positions have been pretty consistent over the years, and I have not seen empirical evidence that voters are opposed to them."

Longabaugh counters that Pombo's environmental proposals have gotten more radical since the last election -- and closer to home: "In the past year, Pombo has proposed both drilling off the coast of California and selling off national parks, schemes with far more immediate impacts on his constituents than his attacks on cornerstone environmental laws."

Several sobering realities face Pombo's opponents. First is the difficulty of unseating incumbents of any stripe, particularly those with Pombo's connections and money. Then there's the possibility that a high-profile challenge from environmentalists could enhance rather than tarnish Pombo's reputation in his conservative home district, even if portions of it are suburbanizing.

And finally, even if Pombo is defeated, considerable damage could be done before he goes. The Endangered Species Act rewrite that he muscled through the House in September is now in the Senate's hands, and enviros say the chances that it or a similar bill will pass are uncomfortably high.

Either way, the momentum within the green community to mobilize an offensive campaign against Pombo so early in the game certainly sets the stage for a high-spirited election year.