Stern debuts on satellite radio and returns to the bad old days, before the FCC got on his case. But is the show worth $13 a month? 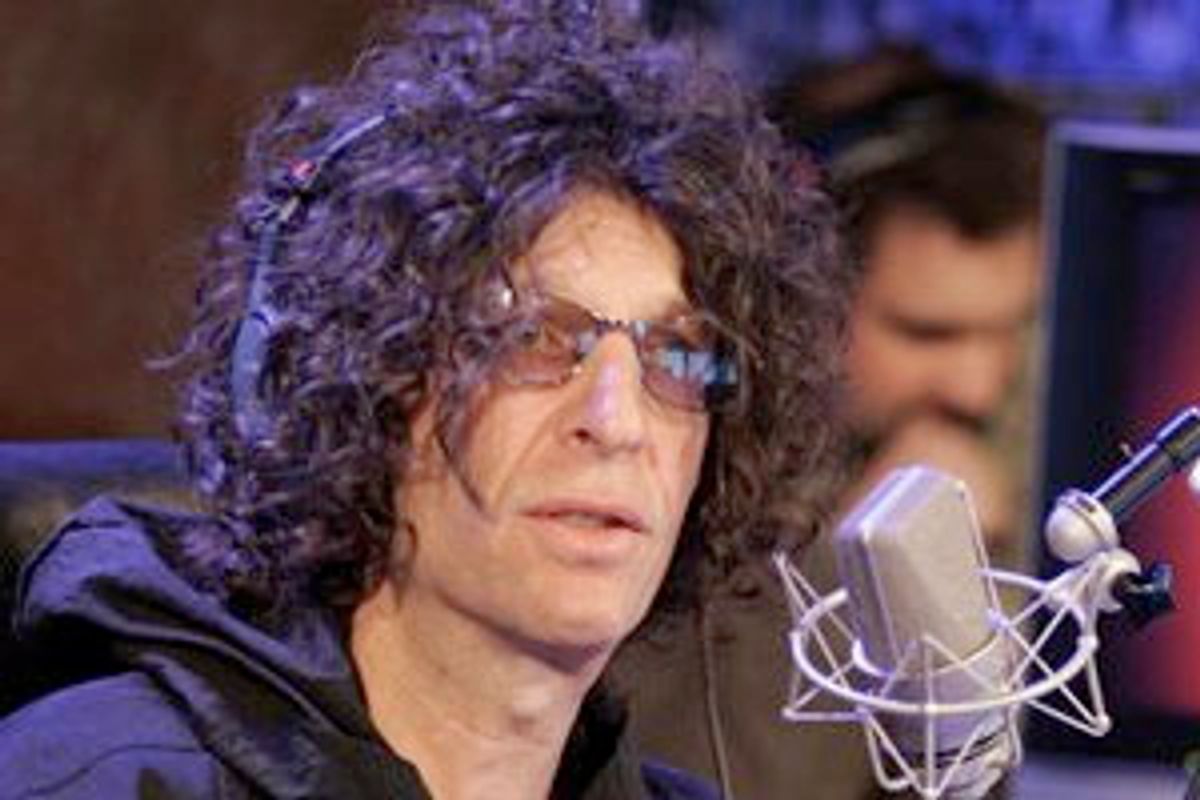 It wasn't without some embarrassment that I ventured into a couple of consumer electronics stores late last week looking for a Sirius satellite radio. And I couldn't exactly be sneaky about it, either; buying a satellite radio, unlike, say, a girlie mag, is a complicated thing, with dozens of considerations regarding subscription plans, portability, whether one's apartment has a clear line of sight to the northeast sky, etc. I had to ask all sorts of questions of the friendly sales staff, and of course, all the while, they knew.

At stores like Best Buy, where the Sirius shelves looked picked clean of radios and the dozens of accessories that seem to accompany these gizmos, employees had seen men like me before. And they've been dealing with us increasingly of late. We are a sad, helpless bunch, who would throw down a hundred dollars, minimum, for a radio, and then spend $13 per month for a subscription, all so that we can enjoy what we've been promised will be an endless, unregulated stream of the most unserious, simplistic, offensive, puerile -- not to mention the funniest, least resistible and uncommonly infectious -- sounds known to humankind. And finally, early Monday morning, after all the money and the waiting, that's what we got: A symphony of trumpeting flatulence, a cacophony of diarrhea, the endless moans and groans of phone sex, orgasm, burping, peeing, pooping, cursing ... Ladies and gentlemen, Howard Stern is back!

Stern's debut this week on subscription-only satellite radio -- a year after he signed a reported five-year, $500 million deal with Sirius and a few weeks after he went off the traditional "terrestrial" radio dial forever -- has been heralded by Sirius as a revolution in media. (The company has plastered national newspapers and billboards all over with its curious Stern ad showing off a black-power fist; naturally, and perhaps by design, the ad has drawn some protests.) Actually, though, there wasn't much of a revolution Monday morning, and when the first sounds of Stern broke through at 6 a.m., the most piercing feeling for longtime fans was one of nostalgic revulsion: The show's opening theme, a version of Richard Strauss' "Also sprach Zarathustra" -- aka the theme from "2001: A Space Odyssey" -- done in farts, was a shot across the bow, the kind of childish, irredeemable thing that we fans had long ago found ourselves appreciating in Stern but that, of late, had come under assault from the government and uptight family-values types.

As Stern insisted repeatedly during the show, what he plans to do in his uncensored satellite playground is more old than new. He says he's not going to become irretrievably vulgar or pornographic, even if a sizable portion of his audience may be hoping for that. Instead, Stern says that on satellite, he'll have the same opportunities that he had on broadcast radio back in the '80s and early '90s, before the Federal Communications Commission got on his case, to entertain his audience by trying bits that may be marginally offensive but are nevertheless funny. "Our line is being funny, and hopefully we'll hit that every day. And that's the goal."

Stern, of course, is an acquired taste, and much of what he considers funny is, for many of us, not really that funny. I've been listening to the shock jock on and off since high school and I find a lot of what he says not even in the neighborhood of hilarious. But Stern has long understood something about his medium that has eluded his detractors and competitors: that he's catching his listeners, many of whom are driving to work by themselves, at a lonely moment in their lives, and that the best way to appeal to them is by offering up a cast of car-poolers along for the ride.

Stern may be hard to like, but as an on-air personality -- the self-aggrandizing, sexually obsessed, misogynistic, racially insensitive, homophobic, insecure and very stupid man who'll say whatever comes to his mind -- he's as comic, compelling and complex as a real person. The same can be said for many in his show's regular collection of oddballs and jackasses. After one listens to these people every day, the show becomes something like a cross between a soap opera and a locker room, with a gang of characters whom you become quite intimate with, yet simultaneously revile.

We won't know for a while how satellite may change this dynamic. But judging by Monday's episode, it seems plain that the show can only become more real, and thus more satisfying, in this freer medium. After all, most people act vulgar, offensive or immature every now and then; a radio personality who's given the same license would seem only more human for it. For instance, can you say that you've never had a conversation like the following not-for-broadcast-radio chat Stern and company had about Alexis Stewart? (Can you say you wouldn't want to?)

Howard: The other day on the air I said it was kind of hot that Martha Stewart's daughter was kind of "cunty." And, by the way, I don't consider that a curse word.

Robin: Well, not everybody goes to gay hairdressers and hears that.

Howard: Oh, where would you go not to get a gay hairdresser? ... No, cunty means like, you know, bitchy, and in kind of a hot way. Like you walk down the hall and you run into Martha Stewart's daughter and she just shoots you a look like she doesn't know who you are ...

Robin: She looks through you!

Howard: She looks right through you. I saw her in a restaurant and she just kind of stares at you, and like gives you attitude. You would think she's the one who made all the money!

Artie [Lange, a show regular]: You know her nickname in high school was Cunty Stewart.

Robin: Everybody should just call her that. Cunty.

There's even a news broadcast on the Stern channels, a twice-daily, public-radio-style outfit staffed by actual reporters who have only one journalistic mission: to report on everything in the Stern universe. Listening to the "Howard 100 News" is a surreal experience; every minute thing that happens to Stern or someone on his show is elevated to the status of news, with serious-sounding anchors and reporters considering the situation as if they were dealing with truly weighty events. For folks not indoctrinated into the Stern world, this business might seem bizarre, but for fans, a newscast, and all the tertiary, Stern-related shows, make sense. If you spend an hour or more listening to these people's foibles in the morning, why wouldn't you want to listen to a newscast following up on the day's events during your drive home?

On Sirius, then, Stern diehards will simply find a lot more Stern to love: They can lose themselves in Howard's world; they can dive deep into every recess of the show; and for many of them, $13 a month will be a price well worth paying. A bigger question is what all those casual, every-couple-of-days listeners, people like me, might do. Salon was kind enough to pay for my first month's Sirius subscription so that I could write this review; even if the show is much better on satellite, I'm not sure that I love Stern enough to spend that much on him from my own pocket.

Stern is never at a loss for confidence, and during Monday's show he insisted he'd make it big on satellite. "One guy said to me, 'Do you feel like Milton Berle?' Milton Berle started off television. When he moved to television people started to watch TV. And here I am sitting at the beginning of new technology responsible for millions of people coming over. And my audience trusts me enough that this will be good that they're willing to pay."

But in a couple of rare moments, Stern seemed to lament the fact that his audience is now much smaller than it was just a few weeks ago, on broadcast radio. Then, he'd regularly attract 12 million people across the country; Sirius, by contrast, has just over 3 million subscribers (though Stern claims the number is rising rapidly as a result of his show's launch). And not only has his audience shrunk, but his enemies, on satellite, are less powerful than in the past. Stern is a combative character, and he's best when he's fighting against the many forces -- the government, conservatives, Don Imus -- he claims are arrayed against him. But on Sirius, his enemies can't touch him: The satellite ad market is tiny, so there are few ratings pressures; and because the conservative push to regulate the new medium appears unattainable, Stern looks safe from government fines.

So as a fan -- as someone who, through the radio, has come to know Howard quite well -- I worry: With nobody to hound him, who will Stern fight now? And if he isn't fighting, and if fewer people are listening, will the world beyond his superfans continue to care about what he does?