I was conned by JT Leroy

I talked to him on the phone for hours. I even listened to his therapy sessions on tape. And after one particularly weird conversation about his upcoming sex-change operation, I decided he was a fake. So why did I still get sucked in? 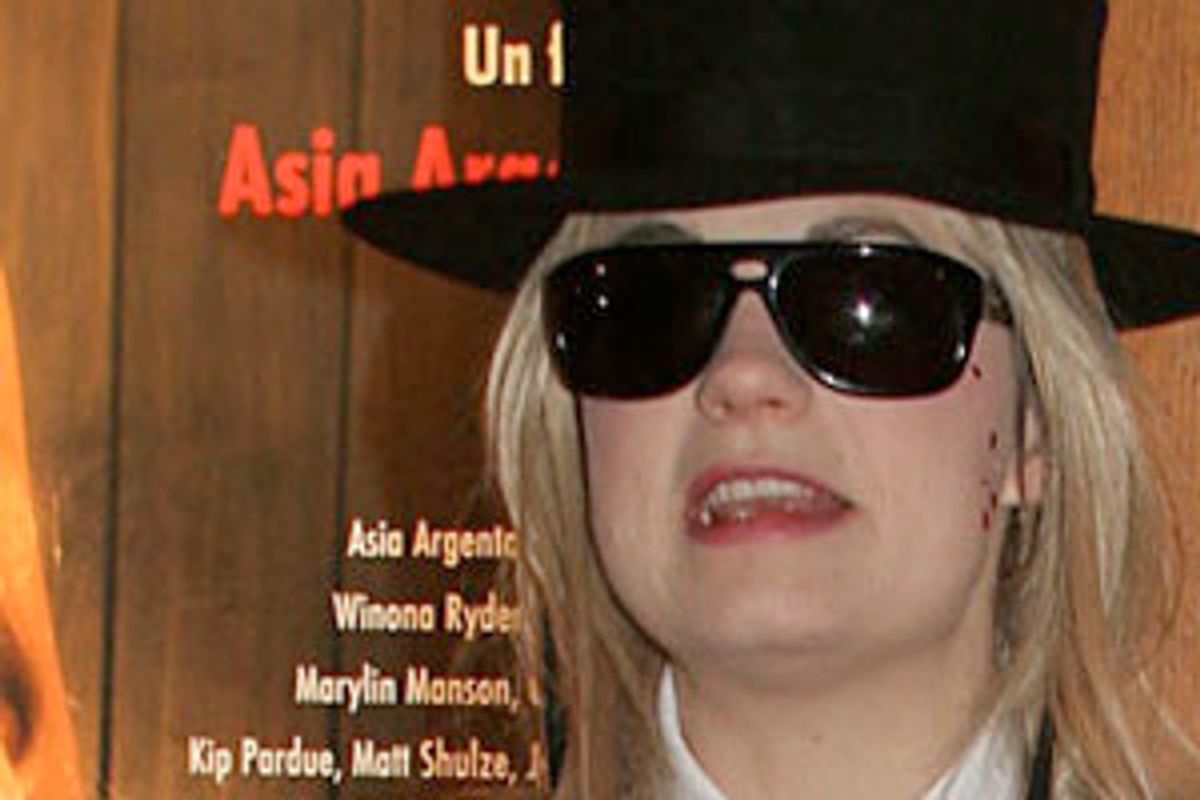 There's nothing I find quite as annoying as the phrase "I told you so." But, well, I told you so. Five years ago, after I read Armistead Maupin's "The Night Listener," a novel based on his experience with a literary hoaxster, I started insisting that the real JT Leroy was most likely a 50-year-old Midwestern woman. Turns out I was off by a decade or so.

As everyone by now knows, JT Leroy does not exist. He is a literary hoax. New York magazine outed him three months ago, and Monday the New York Times came through with the rest of the story. The public face of JT Leroy is Savannah Knoop, the sister of Jeffrey Knoop, one of the authors of the fraud, and JT's books and stories were most likely written by Knoop's wife, Laura Albert, singer for their band Thistle, an entity nearly as contrived as JT himself.

Even after I'd decided that JT was not who he claimed, I kept talking to him on the phone. At first when he called he was interested in speaking to my husband, but Michael couldn't stand the guy. After their first interaction -- an aborted interview of Michael by Leroy for the magazine Bomb back when JT was known as "Terminator" -- Michael refused to have anything to do with him. But I let myself be sucked in.

There was something strangely seductive about that breathy voice on the phone. He was fun to talk to; the sheer magnitude of his self-absorption was entertaining. And there was the whole celebrity thing. He was like a breathing version of Us Magazine. He'd just hung up with Julianne Moore, Courtney Love was telling him a story, Gus Van Sant was giving him a hard time about his script.

I went along with it happily, once even listening for an hour or so as he played taped portions of his sessions with his therapist, Dr. Terrence Owens. I never really understood why JT wanted me to hear these unbelievably boring sessions. I assumed back then that it was because we had talked a lot about mental illness and he wanted me to understand the depth of his experience. In retrospect, knowing that JT does not exist, I think those tapes are a marvel. Someone actually went to the trouble of producing elaborate two-person recordings. And for what? What was the point? They were clearly meant to provide evidence of authenticity, and perhaps playing them for me was a dress rehearsal for a bigger, more important audience.

It will probably be hard for people who think of JT as a street kid turning tricks at truck stops to imagine this, but mostly JT and I talked about our kids. Maybe this was the reason JT called me, someone who wasn't famous or a literary celebrity, someone who couldn't help his career in any way, someone whose name it did no good to drop. JT Leroy just wanted to talk to another mom. He said he co-parented his kid -- a young boy -- with Speedy and Astor, the people I now understand are Laura Albert and Geoffrey Knoop. It seems likely that the person I was talking to on the phone was Laura Albert. We had long, meandering conversations about the challenges of combining work with parenting, about what kids are like at different ages, about the dilemma of private vs. public schools.

It was during one of these conversations that I came to my conclusion that JT was, in fact, a fraud. At some point, apropos of nothing, he told me that since we'd last spoken he had gone ahead and had that sex-change operation he'd been thinking about.

I don't remember the dialogue exactly, but it went something like this:

"Really?" I asked. "I thought they made you go through some elaborate hormonal process before they let you have the final surgery."

"Nah," he said. "I'd done so much damage to my penis, hacking away at it. It was no big deal just to take off the stump."

My first thought was, Jesus Christ, ouch. My second was, bullshit. I mean, come on. Hacking away at it? The stump? Not even I was gullible enough to buy that.

It was after the stump incident that I began asking friends if they thought JT was a real person. Of course, they'd say, they had met him. Well, sure, I'd met him, too. We'd hung out together in Rome in the summer of 2002 when both he and Michael were invited to appear at a literary festival. I met him again at some local readings. Whenever I saw him, he was usually accompanied by Speedy, the woman he described as having saved him from the streets. I didn't pay much attention to her -- she was quiet and not particularly interesting. I might have had I known that she was the person with whom I'd been comparing SSRIs.

The real question is why, even after I became so suspicious of the mythological creature known as JT Leroy, I still talked to him on the phone. After all, it was clear that this person, whoever he was, was playing me. It was also clear why. JT Leroy's creators were interested in using their association with literary figures to burnish his literary reputation. And I was married to one of the figures they wanted to be associated with. I knew this, and still I talked to him. Over the last six years we've probably had no more than half a dozen or so conversations, but I certainly talked to him for longer at a stretch than I do with most of my real friends. I indulged him and myself. So did lots of other people. All those rock stars and movie stars who supported him and spent their time talking to him even though it was obvious he was just manipulating them. Why did they bother? What was his magic?

I can't, of course, speak for Madonna or Winona Ryder, but I was snookered by something JT inspired me to feel about myself. Sure, there was the general entertainment value of listening to stories about the train wreck that was his life. Even as pure fiction they were fascinating. But more than that, talking to JT made me feel good about myself. It might have been because he gave me the opportunity to feel completely sane and secure. It might have been because I was flattered that the same person who whiled away hours with Margaret Cho also seemed to enjoy talking to me. But mostly it was because whoever he was, he seemed so genuinely in need of advice and assistance. It feels awfully good to be needed. It feels good to think of myself as someone so generous with my time that I was willing to devote hours of it to a fucked-up near stranger. That's why I can't possibly be angry at having been taken in. I got as much out of it as he did.

The larger question, one that Maupin expressed so eloquently in his marvelous book, and one that people have been batting back and forth all week, is the morality of courting people's sympathies, including mine, by exploiting the issues of AIDS, homelessness, teenage castaways and transgenderism. Wasn't Albert and Knoop's assumption of these victim identities in order to achieve fame and fortune immoral, even evil? Doesn't it belittle the experience of everyone who has really suffered as they only pretended to?

Yes, of course. And yet somehow I'm not as troubled by this particular thing. It probably did little harm, except to the egos of those of us who were fooled, and it probably did some good, if the books themselves found an audience among the very people JT was pretending to be. I'm much more troubled by James Frey's actions in perpetrating a similar fraud. I view him as far more venal, more absurdly self-aggrandizing, and dangerous. Because Frey actually tried to convince people that his "recovery" could inspire them in a specific way. If they acted as he did, if they followed his lead, they too could be saved. JT Leroy's creators presented a model of redemption, not a prescription for it.

The larger questions of the hoax of JT Leroy and the unmasking of James Frey will probably consume cultural critics for some time. What JT Leroy's creators were selling was not just the books and stories, some of which were fine and moving in their own right. What they were selling was an imprimatur of authenticity based on their supposed author's biography. This is why the tales of the traumatized waif's life got so much attention -- because it was supposedly real. Still, I am not convinced, as some are, that the hoax says something deeply disturbing about the way the reading public values the artist over the art, the biography over the work. Is that a surprise, and does it really matter?