Murder from Darfur to Cairo

At a Sudanese refugee camp, I witnessed the desperation behind the protests -- and eventual slaughter -- of African refugees in Egypt. 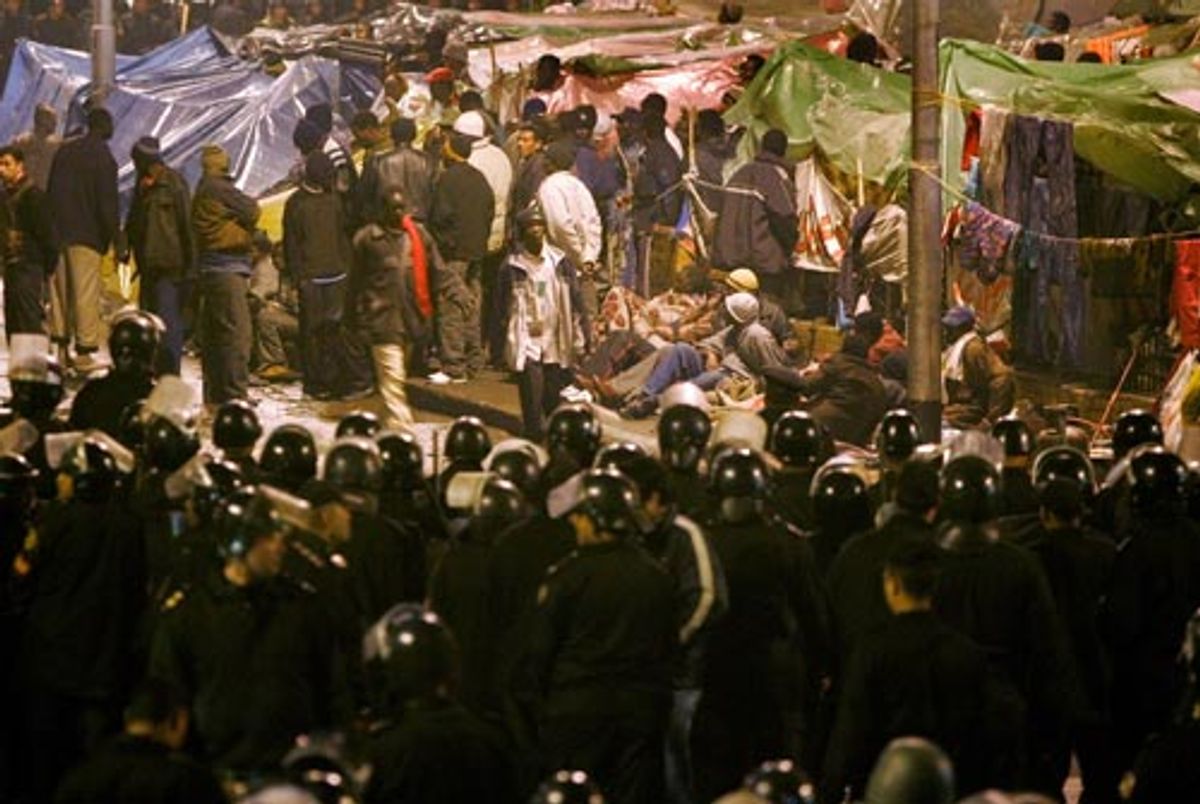 No one, it seems, could reason with the Sudanese refugees gathered in Cairo on New Year's Eve.

For three months they had maintained a squatters encampment in the Egyptian capital. At times, as many as 3,000 men, women and children were jammed into a small park, not much larger than a basketball court, at a busy intersection in the upscale Al-Muahandiseen, across the street from the United Nations High Commission on Refugees. They were protesting UNHCR's refusal to grant them official status as refugees and resettle them in a third country.

Stubbornly and against all obstacles -- the growing stench of human waste, complaints from neighbors, the repeated refusal of UNHCR to grant their request, and threats from the notoriously violent Egyptian police -- the Sudanese maintained their crowded vigil. UNHCR refused to grant them refugee status because it reasoned that Sudan was no longer at war. Following the January 2005 signing of the Comprehensive Peace Treaty, it stated that Sudanese citizens were free to return to their homes.

However, many of the refugees had fled from Darfur, a volatile western region of Sudan not covered by the peace treaty. There, African farmers are still being killed and raped by Arab militias known as Janjaweed, which are supported by the government of Sudan in a systematic pattern that the U.S. government has identified as genocide. Along with refugees from other parts of Sudan, an estimated 8,000 Darfurians have taken refuge in Egypt, where they have complained of racism at the hands of Egyptian landlords and police, and where Egyptian law does not allow them to work.

Frustrated by weeks of negotiation and the refugees' refusal to accept a deal whereby they would remain in Egypt, UNHCR officials turned the matter over to Egyptian authorities. On the night of Dec. 29, according to published accounts, Egyptian riot police began blasting the group with water cannons and yelling through bullhorns that the protesters would be removed by force. The drenched refugees huddled together in the cold, steadfastly refusing to abandon the park.

Then, a few hours before dawn on New Year's Eve, 5,000 black-clad riot police, swinging truncheons, waded into half as many unarmed protesters. Among those killed were young children. "My daughter, Asma, was killed," Abdul Aziz Muhammad Ahmed told a reporter. The girl was 9 months old. Her uncle dropped her when the police clubbed him. Another man's 3-month-old baby was clubbed in his arms.

The official death toll climbed to 28, as more died in the hospital and in police custody. But the Cairo representative of the Sudan People's Liberation Movement claims the death toll may have been as high as 265, based on a tour of the city's hospitals. Egyptian authorities have barred journalists and refused to release bodies.

Whatever the actual figure, the attack was in clear violation of the U.N. Code of Conduct for Law Enforcement Officials, which states that "law enforcement officials may use force only when strictly necessary and to the extent required for the performance of their duty."

The massacre was forgotten almost instantly by the world press. But the factors leading up to it point to the much larger problem of Africa's 15 million refugees -- and in particular those from war-ravaged Sudan, Africa's largest country, whose continuing export of misery threatens the economic health and political stability of its neighbors.

This was made clear to me one week before the attack in Cairo, when I interviewed refugees in the Kakuma refugee camp, located across Sudan's southern border, in northern Kenya. What the refugees told me underscores the desperation of their compatriots in Cairo.

Kakuma camp is larger than most actual towns in Kenya. Home to 73,000 refugees, it is a sprawling expanse of huts organized along tribal lines, its perimeter fenced with concertina wire, and surrounded by desert. The camp, once regarded as temporary, is now 14 years old.

Sudanese make up the majority of the camp's inhabitants. Most fled their homeland some years ago during Africa's longest-running civil war -- the 21-year-old struggle between the Islamist government centered in Khartoum, in the north, and the marginalized black African rebels in the south fighting under the banner of the Sudan People's Liberation Movement.

"Our daily ration of water is 1 liter per person," he continued. "This is for drinking, cooking and washing." As a visitor who was drinking 3 to 5 liters per day to stay hydrated, I found this difficult to believe. But others corroborated Mathiang's claim. Food was also severely rationed. The monthly allotment of maize was 3.5 kilograms per person; .2 kilos of beans, and .25 of rice. Milk and sorghum were more abundant. The couple dozen people gathered around me, mostly children born in the camp, showed none of the grosser signs of malnutrition that I could observe, but all were thin.

Their complaints were borne out in testimony given in June 2002 before the U.S. Senate by Jason Phillips, director of the International Rescue Commission's program in Kenya. The IRC's role is chiefly to supplement the meager daily rations in the case of young children and lactating women. Refugees rarely receive the 2,168 calories considered the daily minimum, Phillips said. He called attention to a "dangerously high rate of malnutrition in Kakuma representing a complete abandonment of minimum international humanitarian standards for food assistance." Chronic shortages in the World Food for Peace pipeline were creating a "downward spiral" at Kakuma. Cutting back on food, he concluded, was "neither cost-effective nor humane."

Phillips' warning came more than three years ago. Inaction and the past two years of drought in northern Kenya and Ethiopia are expected to triple the rate of malnutrition among children under 5. Not surprisingly, last November the U.N. World Food Program Emergency Report cited "alarming rates of malnutrition" in Kakuma. In December, to make matters worse, U.S. Ambassador to the U.N. John Bolton succeeded in putting a cap on the U.N.'s annual spending. In short, the food deficit at Kakuma and other camps is increasing, not shrinking.

Equally disturbing, and perhaps even more telling of the pressures on Sudanese refugees, is the fact that some 5,000 newcomers have arrived at Kakuma since Sudan's Comprehensive Peace Agreement was signed in January 2005. Some are fleeing new conflicts, such as one in the oil fields of the upper western Nile, where Chinese security forces are said to be driving people from their homes to make way for drilling, pipelines and road building being carried out by China's National Petroleum Corp. Some of this is reportedly with the approval of the Sudan People's Liberation Movement, which is eager to partake in the region's oil wealth, as provided under the peace agreement. China has been the most aggressive of the foreign suitors seeking to tap Sudan's oil reserves.

Some, farther south, are fleeing violence between cattle-herding Dinka Bor and Moru farmers over scarce water and land resources. Others have been attacked by militias loosely sponsored by the Khartoum government or marauding on their own. Still others are suffering incursions from the Lord's Resistance Army, a violent movement based in northern Uganda that some observers believe is receiving supplies from Khartoum, although this remains unconfirmed.

Apart from these specific conflicts, the task of repatriation is complicated wherever former neighbors -- including elements of the Dinka and Nuer tribes who fought each other during the split within the SPLM -- try to return to their former homes. Various church groups are engaged in peacemaking and mediating efforts, but challenges attend every effort at repatriation. Land mines are an obstacle to resettlement, and their removal is proceeding slowly. With every herder carrying an AK-47, and the SPLM only slowly taking on the functions of government in south Sudan, day-to-day civil order is fragile.

Under the terms of the Comprehensive Peace Agreement, south Sudan will have its own regional government, centered in Juba, its new capital. The regional government will share the proceeds from oil with the Khartoum government, and in six years will vote whether to remain in the federated system or secede as a separate nation.

But the Khartoum government has a history of playing factions against each other and using delay tactics. The peace could easily unravel. Despite assurances from both Khartoum and the SPLM, the refugees are wary of returning to their homes. "We cannot rest," Daniel Mathiang told me at Kakuma. "How can we know if it is safe to return?" He lost all eight of his brothers in a 1991 helicopter raid on his village, near Bor.

"They say we are at peace," another refugee told me, "but I am not so sure. This 'peace' has destroyed many things." He says his own Dinka village, outside Abyei, in the oil-rich upper western Nile, has not been given "priority" in efforts to stabilize the region. Villages like his suffered ongoing attacks between 1998 and 2003 from Sudan government troops allegedly acting in concert with Talisman Energy Inc., a Canadian oil company. Talisman Energy is currently a defendant in a class action lawsuit brought by the Presbyterian Church of Sudan against both the company and the government of Sudan, alleging they conspired to commit assault and murder against civilians.

But if the peace is shaky in the areas of Sudan covered by the Comprehensive Peace Treaty, it is nonexistent in Darfur, where the war continues to ravage. Nearly half the population of Darfur have been driven from their homes. Janjaweed militias continue to attack refugees when they venture outside camps to gather firewood. Rape continues to be used as a weapon of intimidation and an instrument of genocide.

In recent months, the situation has turned even more hellish. Rebel attacks on humanitarian supply convoys have increased, causing many aid organizations to withdraw personnel. With local economies shattered, banditry widespread, and some 3.5 million Darfurians wholly dependent on outside aid, the threat of starvation hangs over the entire region. And now Khartoum appears to be precipitating a war with neighboring Chad, where 200,000 Darfurians have taken refuge. Recently 100 Darfurians showed up at Kakuma. After Arab militias had prevented them from crossing into Chad, this group had trekked for nine months over 1,500 kilometers to get to Kakuma.

After the New Year's Eve massacre in Cairo, a spokesman for Egyptian President Hosni Mubarak expressed the country's "sorrow and pain for all the victims."

Egypt, it should be observed, has always treated Sudan -- and especially southern Sudan -- as a colony. President Mubarak had tried to block the peace process that led up to the 2005 peace agreement. In a recent New York Times article, Egypt was singled out along with Pakistan for opposing a plan to restructure the U.N.'s widely discredited Human Rights Commission, on which Sudan occupies a seat. For its part, Khartoum has failed to condemn the Egyptian attack on the refugees, which in its savagery and racial undertones bears more than a passing resemblance to the Janjaweed attacks.

UNHCR commissioner Antsnio Guterres said in Geneva that he was "deeply shocked and saddened by the tragic events." But U.N. leaders have taken no tangible action toward addressing the tragic collision between racism and failed policy that took place in Cairo. As human rights organizations call for a thorough investigation, the incident points further to the need for reform at the beleaguered U.N.

In the meantime, Egypt plans to send more than 600 of the surviving refugees back to Sudan -- a forcible repatriation that for some of them is bound to serve as a death warrant.