This movie about a trailblazing college basketball team isn't a slam dunk, but it does manage to sink a few surprisingly good shots. 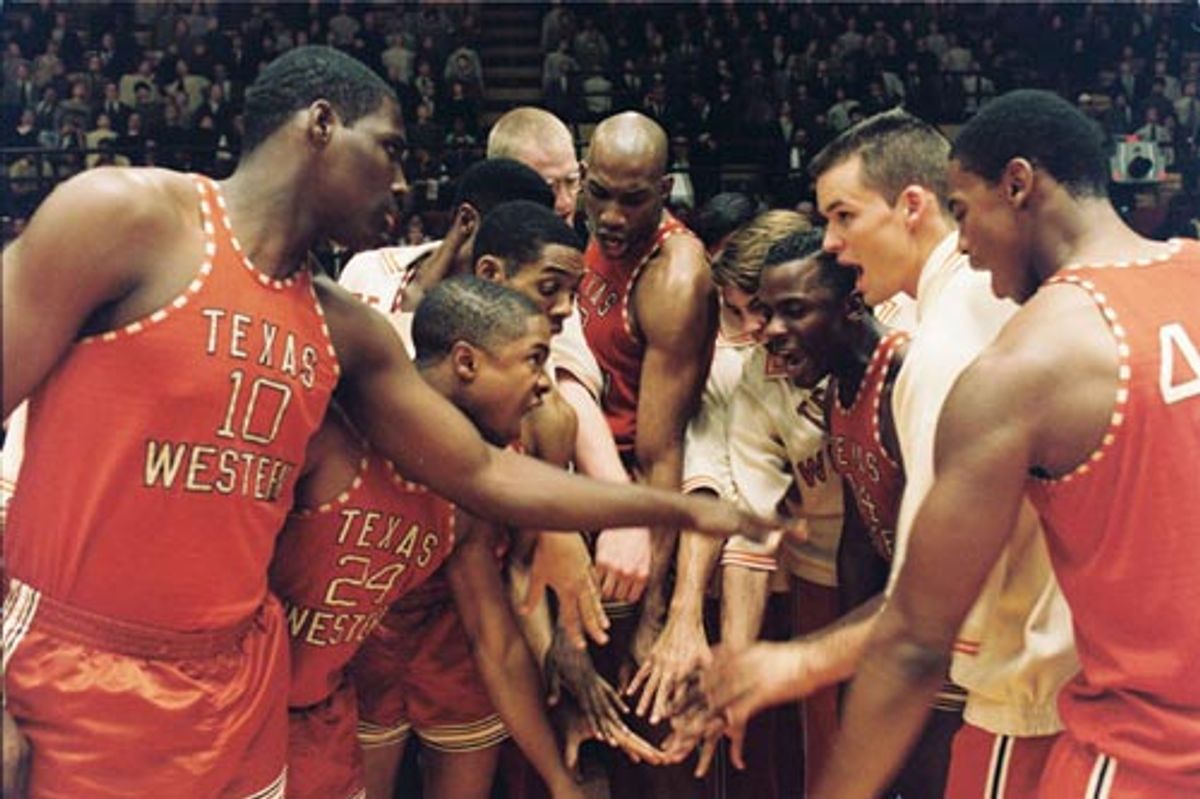 When a movie plays every card, it's bound to win a hand or two. You can't exactly call that approach craftsmanship. But in the case of the Jerry Bruckheimer-produced inspirational sports drama "Glory Road," it at least amounts to a kind of blunt effectiveness.

The picture often feels hurried and slapdash: Scenes are piled on top of one another so that there's no breathing room between them, no quiet spaces to allow you to soak up the subtext. But while the picture's emotional calculation is meticulous, it isn't cheap. And although the last thing most of us want to see are movies that we'd call "educational" or "enriching," "Glory Road" is something of a stealth picture. I'd even say that, secretly, it isn't even first and foremost a sports movie. Based on real events that unfolded during the later years of the civil rights movement -- an era that may seem like ancient history to kids today, although to those of us who were alive at the time, it sometimes feels painfully recent -- "Glory Road," with a minimum of sermonizing, imparts a sense of exactly what it meant, in 1966, to have black kids outnumber white ones on a college basketball team. For such an unapologetically unsubtle picture -- and let's not forget that it was shepherded into being by a guy whose name, aptly, sounds a lot like "Brickhammer" -- it has some surprisingly subtle underpinnings.

"Glory Road" is based on the true story of basketball coach Don Haskins (played here, with a believable sense of determination, by Josh Lucas) who, in the mid-1960s, recruited a predominantly African-American basketball team for Texas Western University, unheard of at the time for a Southern school. The team went on to win the 1966 NCAA championship against an all-white team, the University of Kentucky Wildcats: In an unprecedented move, Haskins had chosen to put all his black players in the starting lineup -- a strategy that wasn't, according to Haskins, intended as an overt social statement, although it clearly made one.

"Glory Road" is one of those pictures that gets "dumped" in the early part of the year, the kind of movie that some critics, still exhausted from the Christmas rush, feel they don't even need to bother with. But sometimes it's the problematic movies that are most fascinating. "Glory Road" is made by a newcomer, whom the movie's press kit identifies with a most unfortunate choice of wording: "'Glory Road' marks the film directorial debut of James Gartner, who has had an illustrious career in advertising." There's never any doubt that "Glory Road" is selling something: The music alone, a curious mix of '60s R&B (effective) and phony-baloney inspirational noodlings (ineffective, and the work of composer Trevor Rabin, a veteran of the bloat-rock group Yes), comes off like two different kinds of test-marketing jammed into one movie.

And yet "Glory Road" isn't easy to write off. The movie -- its script is by Christopher Cleveland and Bettina Gilois -- tries every dramatic and comic trick in the book. But even when you see these tricks coming, they get you. One player, Harry Flournoy (Mehcad Brooks), is told he'll be kicked off the team if he doesn't get his grades up. Next thing we know, his mama (Elisabeth Omilami) has come all the way down from Gary, Ind., to almost literally take him by the scruff of the neck and sit him down in front of the books. (Actually, she sits behind him in one of his classes, volunteering him for every question the teacher asks -- and he gets every answer right.) In another scene, a forward recruited from New York City, Willie "Scoops" Cager (Damaine Radcliff), suffers chest pains during a practice session. It turns out he has a dangerous heart condition, and Haskins has to take him off the team. Later, just before an important game, Scoops' mother shows up (she's played, wonderfully, by Valeri Ross), and begs Haskins to let her son play, just for a little bit. Basketball means everything to him, she explains, and while the lines seem to jump out of some generic screenwriters' handbook, they still hit home.

Oddly enough, or maybe not, the scenes in which the game is actually played may be the least memorable ones here, even though they're reasonably well shot. Far more resonant are the casual moments, as when Derek Luke's charismatic Bobby Joe Hill, the team's unofficial social coordinator, leads the way out of the dorm as the guys sneak out for some fun. Some of the white players ask if they can come along, and find themselves the only white faces at the party the guys go to. Met with curious, semi-hostile stares at first, they're eventually embraced by the group. A mix of black players and white ones end up on the front porch, where a white guy asks his teammates whether they want to be called "colored" or "black." The scene, played with lashings of good humor, underscores the difference between the thinking of old-guard white Southerners, staunch in their refusal to change, and younger people who knew change was long past due, even if they didn't know how to go about it. (This bridge to understanding is challenged further when the black players have to explain to the white guy that when they say something is "bad," they really mean that it's "good." The kid's befuddlement is one of the movie's great, if obvious, jokes.)

"Glory Road" isn't -- and doesn't attempt to be -- grittily realistic, but it does find ways to address some of the rough realities of the time: In one scene, a black player is beaten up by a couple of white guys in the restroom of a Memphis cafe. In another, some of the black players unlock the door to their motel room to find that racial epithets have been scrawled on the walls in red paint. Both scenes have a suitably chilling directness -- Gartner doesn't overdramatize them, probably because he realizes he doesn't need to. "Glory Road," like so many mainstream movies these days, isn't the picture it could have been. But missteps can sometimes mean so much more than certainty does. And sometimes it takes a sports movie to remind us how far we've come as a country -- and to marvel at how we got here at all, in our awkward combination of leaps and baby steps.