Queen Latifah brings a touch of old-fashioned movie-star glamour to this fluffy folderol. 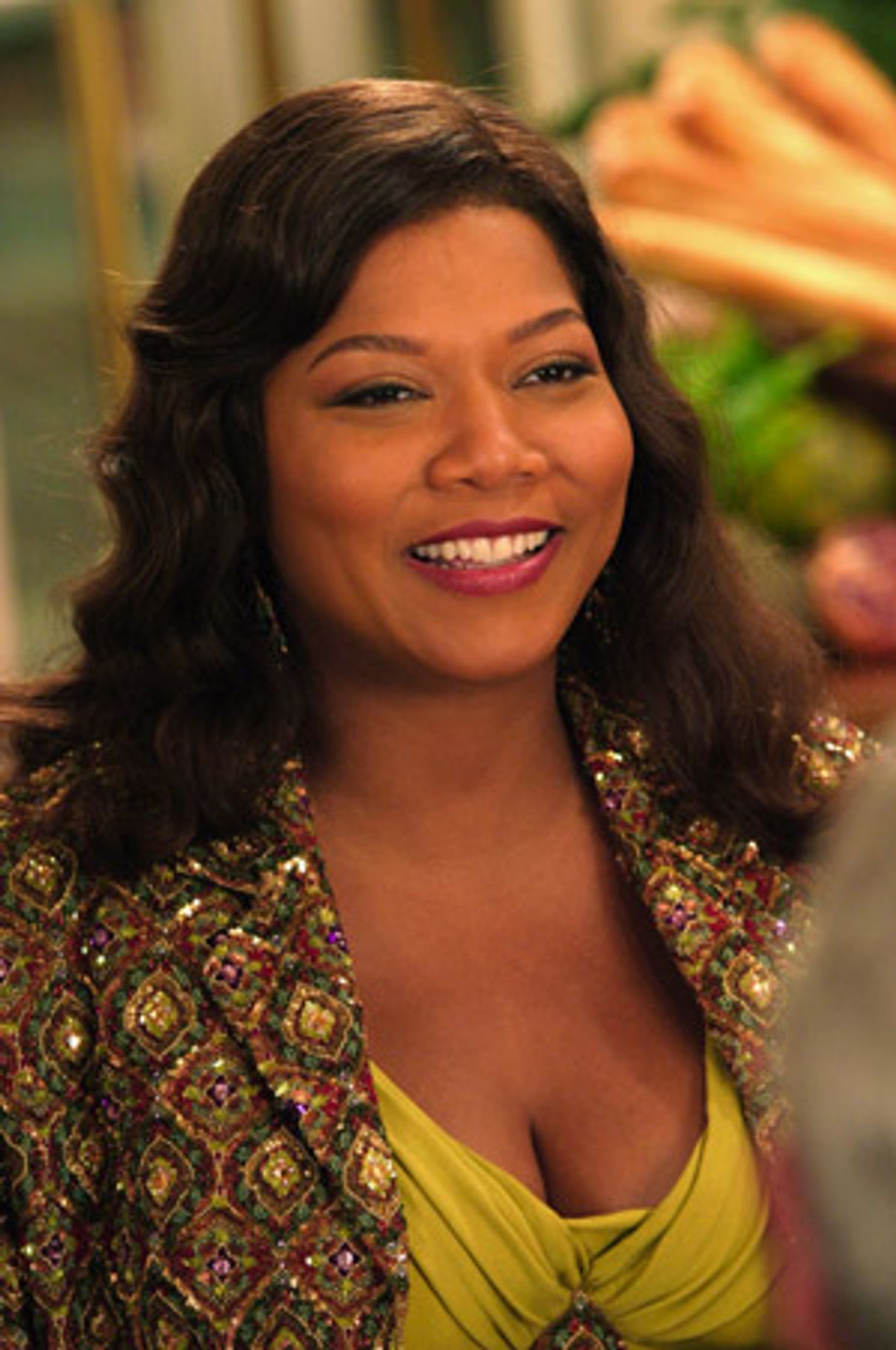 Wayne Wang's "Last Holiday" is a movie lost in time and space, and not just because it's a remake of a 1950 Alec Guinness picture. Queen Latifah plays Georgia Byrd, a shy New Orleans department store clerk and skilled amateur cook who, after learning she has only a few weeks to live, empties her savings and books herself into the fancy Czech resort hotel she's always dreamed of visiting. (It's called Grandhotel Pupp, pronounced with a long u, a name that down-to-earth Georgia can't help giggling over.) Georgia is determined to live her last days to the fullest, spending her afternoons mastering crazy sports she never before had the guts to try, and her evenings making up for a lifetime of careful dieting: She takes particular pleasure in sampling the butter- and pork-fat-laced delights of one of her idols, genius chef Didier (played by the charmingly game Gerard Depardieu).

Georgia is emboldened by knowing she has nothing to lose, so she doesn't hesitate to upbraid hotel guests who are rude to the help; she even dresses down her own state's senator (Giancarlo Esposito), who coincidentally happens to be staying at the hotel, for ignoring his constituency. And eventually, she wins the guy -- played with winning earnestness by LL Cool J -- who, in her old life, she could barely work up the nerve to talk to.

This is a picture about learning to take chances, about not waiting until the last minute to recognize our potential. At its core, it's a formulaic empowerment vehicle, and its problems are almost too numerous to list: The script (by Jeffrey Price and Peter S. Seaman, adapted from J.B. Priestley's original) has a sticky, over-shellacked feel, and visually, the picture has a dull, grainy look. There are some funny gags interspersed among the undistinguished ones, but Wang's direction has little snap or wit, and the movie overall is too fixated on the laborious task of massaging our universal self-esteem.

But there are times when going to the movies demands a bit of daring on the part of the audience, a willingness to leap the gap between what a movie is and what it's yearning to be -- or what, in an alternate universe (or at least in the hands of another director), it might have been. Watching "Last Holiday," I kept waiting for the moment I could decree the movie truly terrible, the instant I could comfortably put my pen and notebook away and give it up for lost.

But that moment never came, partly because I never fail to take pleasure in Latifah, and partly because I couldn't shake the eerie feeling that the movie I was watching was something of a ghost from another time. Behind the blatant conventionality of "Last Holiday" -- particularly its "live every moment to the fullest" sloganeering -- lurks a spirit that's defiantly anachronistic, without necessarily being stiff or conservative. The picture takes place in the present day and yet adamantly refuses to live in it: Its vision of luxury comes not from hip-hop videos or contemporary fashion spreads but straight from '30s Hollywood, and similarly, its view of the gap between the haves and the have-nots comes straight out of Depression-era movies. Georgia lives in a comfortable but not exactly lavish apartment in a run-down New Orleans neighborhood. When she steps into the lobby of her fancy European hotel, she marvels at the gilt angels on the ceiling, and in her room, she sinks into the plush luxury of downy pillows and crisp white sheets. For Georgia, luxury is about beauty and comfort more than bling. Even in the obligatory montage in which she shops for new clothes in an upscale boutique, the outfits that suit her best are satiny evening dresses, not wild rhinestone- and mink-trimmed denim get-ups. (At one point, done up in a dashing Alicia Keyes-style fedora, she laughs at her reflection in the mirror, saying, "I can't wear this!" -- not because it doesn't look great on her, but because it's so obviously someone else's style and not her own.)

There's something exhilarating about the way "Last Holiday," for all its obvious cracks, strives toward such an old-fashioned vision of glamour and luxury -- maybe largely because Latifah, one of our great contemporary movie stars (whether we realize it or not), deserves nothing less than all-out glamour. Outside of her salacious turn as Mama in "Chicago," Latifah has not yet had a role worthy of her. But "Last Holiday" proves once and for all -- perhaps even more than last year's breezy but unshaped "Beauty Shop" -- that she can carry even the most flawed material squarely on her stunning shoulders. With her pillowy cheekbones and luxe proportions, she's a radiant, vital presence, like an angel sent down from a heaven that actually has a working kitchen. In "Last Holiday," as she surveys the treats Chef Didier places in front of her (he's delighted with her, naturally, because she appreciates the affirmation that is butter and fat), her face registers pure bliss, an encapsulation of so many of the basic things we want out of life -- to laugh, to eat, to enjoy the company of family and friends, and eventually, to go to bed.

But as great as Latifah is, I get the feeling that "Last Holiday" will be a hard sell with lots of moviegoers. Leaving the theater, I heard two audience members derisively cutting down the mechanics of the plot -- for instance, the way the doctors so cavalierly, with just a minimum of testing and a glance at a few brain scans, announce that Georgia is going to die.

If you're looking for realism, that detail is absurd. On the other hand, the ability to spot such silliness doesn't exactly make you a discerning viewer. We take such pride in our sophistication as moviegoers, in our ability to call out every single marionette string in the moviemaking process, that sometimes we can barely bring ourselves to enter the universe of a movie -- the last thing we want is to seem silly or gullible. ("The plausibles," is what Hitchcock called viewers like that, the ones who always ask, "Why don't they go to the police?" Because then there wouldn't be a movie, he answered.)

But Georgia can't go on that dream vacation -- she can't eat the gourmet pork fat, and she can't get the groovy guy -- until after she gets that bad-news diagnosis. It's a hurdle the movie has to leap to get to the good stuff, and we have to jump along with it. Maybe the greatest sin "Last Holiday" commits is demanding our innocence, and that's the last thing we want to give up. There's something in us that wants to make sense of that brain scan, so we can prove to ourselves that we can't be taken in by folderol. But if we can't move past logic, we miss all the eating, the talking, the laughing. We miss everything we supposedly came to the movies for.