"Looking for Comedy in the Muslim World"

Albert Brooks brings people of all religions together for a great big group yawn. 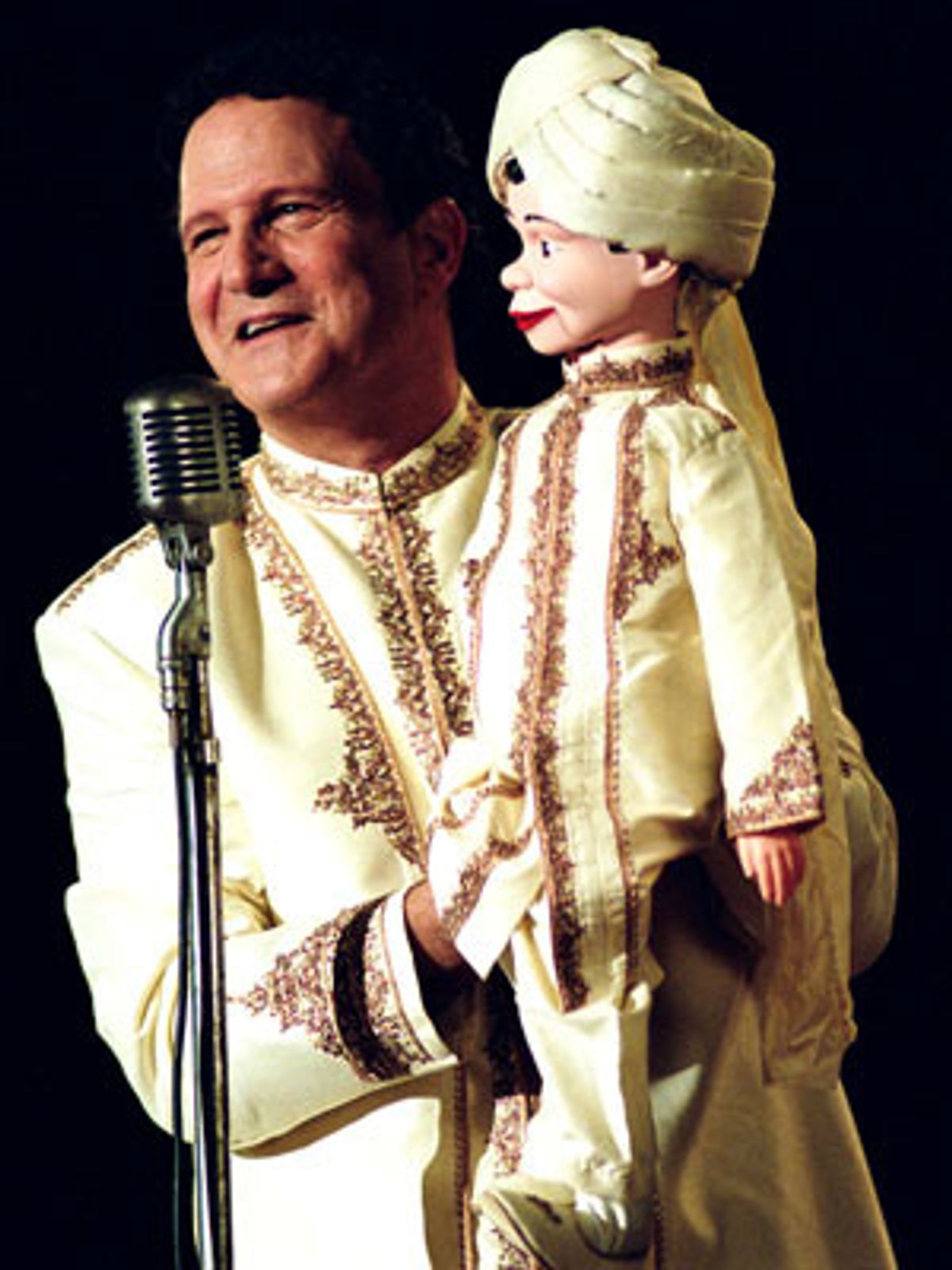 If you had any a choice in the matter, Albert Brooks, his not-quite-there eyebrows framing a high forehead filled with anxious thoughts, probably isn't the first guy you'd send to the other side of the world as an ambassador of comedy. He's not self-deprecating in the way, say, the young Woody Allen was, able to lure us into sympathetic complicity by revealing every nervous wrinkle in his self-esteem. Brooks isn't conspiratorial in that way: Instead of wooing us with his neuroses, he intentionally and considerately stands far back enough so we won't catch them. He's so deadpan he's often inscrutable, which is precisely where his genius lies. His nonchalant deconstruction of ventriloquism -- when the dummy on his arm, known as Danny, talks, Brooks' mouth moves unapologetically -- is a great surrealist gag. It's not that we can't believe what we're seeing; it's that we can't believe what he's getting away with. But will it play in Delhi?

In "Looking for Comedy in the Muslim World" -- of which Brooks is star, writer and director -- the answer is no. And seeing the gag through the eyes of that Delhi audience, we can see why. Laughter may be unifying, but nothing brings people together like the stark recognition that a joke isn't funny -- even a joke that has been hilarious elsewhere, in other contexts, as Brooks' Danny the Dummy routine has been. In "Looking for Comedy in the Muslim World," Brooks pursues an ambitious idea and then doodles so aimlessly that he loses the thread. The movie has a perversely unifying effect: Muslims, Christians and Jews may not be able to agree on exactly who the heck Jesus is, but they're fully capable of bonding in boredom.

In "Looking for Comedy," Brooks plays a version of himself, an aging comic actor who's having trouble getting movie roles. When the State Department asks him to participate in an experiment that will help the United States better understand Muslim culture, he considers the assignment an adventure. He'll travel to India and Pakistan (with two ineffectual State Department lackeys in tow, played by John Carroll Lynch and Jon Tenney), where his mission is to find out just what makes Muslim people laugh. Once he arrives in Delhi, he hires a smart, capable assistant (played by Sheetal Sheth, who, with her marvelous timing, manages to resuscitate the movie whenever she's on-screen) and gets to work putting together a stand-up comedy performance for his strange new audience -- a performance destined, of course, to flop.

Brooks doesn't intend any condescension here. He states in the movie's press notes that he wanted to use his art form, comedy, as a way of grappling with the ways in which the world changed after 9/11. But "Looking for Comedy" doesn't show evidence of any grappling whatsoever. The best, most incisive gags here are the ones that poke a very pointy stick at the unease between Muslims and Jews, most notably a sharp scene in which Brooks meets with some Al-Jazeera execs (the network wants to recruit him for a sitcom whose title, roughly translated, is "That Darn Jew").

But those gags are few and far between, and mostly, the picture is timid and unshaped. Maybe Brooks would be the first one to admit that he's really trying to limn cultural differences, as opposed to strictly religious ones. But that means that instead of aiming for the genuinely touchy subject -- the way individuals' religious beliefs reflect what they will or won't laugh at -- most of his jokes are of the lame, East-meets-West variety. When he asks the audience, during his stand-up performance, why there's no Halloween in India ("Because they took away the Gandhi" is the punch line), the joke is supposed to be kindergarten-caliber, and, of course, the audience isn't supposed to laugh. Brooks sets himself up as the butt of the movie's big joke -- a well-intentioned Western comic attempts cross-cultural outreach and just look what happens -- but his bombing is simply painful to watch. It's not entertaining, not even in a twisted, sadistic way, and Brooks' obsessive attempts to engage his audience only coat the movie with an egotistical veneer. "Looking for Comedy" pretends to be a plea for understanding, but it isn't about what Muslims do or don't find funny; it's only about Brooks' failure to make them laugh.

"Looking for Comedy" was filmed on location in Delhi and Agra. But where's the daring in that? Would Brooks have been forced to go further with his material if the story had been set in, say, Saudi Arabia -- or any country that Westerners immediately identify, wrongly or correctly, as having a strong, "typically" Muslim mind-set -- even if he hadn't actually been able to film there? The unsavory truth is that Brooks didn't really try very hard to look for comedy in the Muslim world -- or anywhere else, for that matter -- and yet he wants to claim credit for at least trying to lift the veil. He should know as well as anyone that comedy is a harsh mistress. But he hasn't even attempted to imagine what she might be wearing beneath her burqa.