Kate Beckinsale's latex-clad bod is all there is to recommend about this gory Gothic sequel. 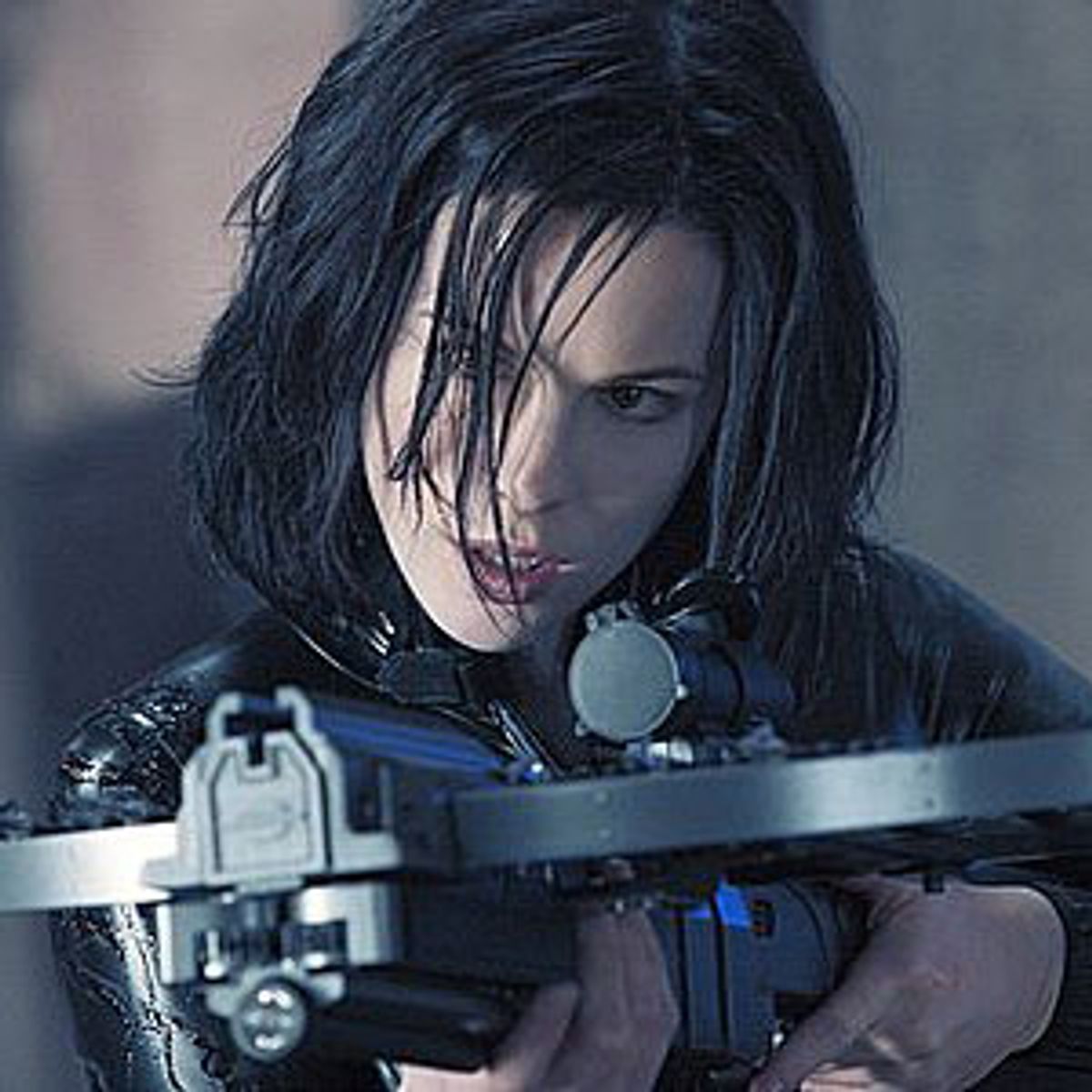 "Underworld: Evolution" is a double-Diet Coke movie: If you need to step out for a minute, you might miss a random impaling or computer-generated human-to-werewolf transformation, but don't worry -- there'll be another one along shortly. And the plot is so convoluted that missing even five minutes at a stretch won't make any difference in your comprehension of the story.

It didn't have to be that way. Audiences have gotten so used to throwaway entertainment that they begin throwing it away even as they're watching it: They tell themselves that the plot isn't supposed to be clear; all that's supposed to matter is special effects, and not even those have to be all that memorable. But I recall greatly enjoying the first "Underworld" movie -- released way back in 2003 and, like this one, directed by Len Wiseman. The production design spoke of a futuristic Gothic universe whose artisans worshiped, rightly, at the feet of the Chrysler Building gargoyles; Bill Nighy, in all his slithery elegance, had a great deal of screen time as Viktor, the duplicitous resurrected leader of a vampire colony; and Kate Beckinsale, as Selene, Viktor's servant and surrogate daughter, did plenty of prancing and pouncing in a costume that made her derrière look like a latex-coated peach. Under the spell of that peach as I was, I don't think it much mattered whether the plot of the first "Underworld" made perfect sense, but regardless, I manage to recall bits of it even today.

But narratively, if not visually, "Underworld: Evolution" is a different beast. Beckinsale, thank God, is back in more latex: She's a lovely, hardy actress, and although she hasn't had many roles worthy of her, she has been luminous and affecting in all kinds of material. But as hard as she works, she deserves better than this: "Underworld: Evolution" disseminates information without actually telling a story. A dimly gory prologue -- when blood spurts, it shoots out in a regal shade of maroon -- and several flashbacks provide us with the essential background, involving a long-running feud between vampires and werewolves. (The technical name for the latter is Lycans, not to be confused with the harmless mossy stuff that grows on trees.) There are two brothers in this story: Way back in A.D. 1202, vampire Marcus (Tony Curran) saved the life of his marauding werewolf brother, William (who eventually, and somewhat inconsequentially, shows up in the form of Brian Steele), by striking a deal with vampire-leader Viktor (Nighy, who, unfortunately, appears in only a few brief scenes here). Viktor will spare William's life, but he insists on imprisoning him -- for eternity.

Many years later, Viktor is dead. Really dead -- he has been killed by Selene, who is now in exile, scampering through the forest with her boyfriend, Michael (Scott Speedman), a very powerful werewolf-vampire hybrid (and, as far as they know, the only one in existence). Marcus shows up, now looking less like your garden-variety vampire and more like the Satan you used to see on old Roman Catholic holy cards, a malevolent figure with bony wings and veiny gray skin. Of course, he's up to no good -- if he weren't, you'd have no movie -- and it's up to Selene and Michael to put a stop to his high jinks.

Limbs are lopped off, sternums are pierced, and other stuff happens, too: Somewhere in Danny McBride's script, there probably is an actual plot thread, if you can bring yourself to care about it, which is the hard part. At the very least, though, "Underworld: Evolution" doesn't look much different from the earlier picture, which is a blessing. (The cinematographer is Simon Duggan.) The movie has the same color palette of smoke blues and steel grays; the vampire characters have eyes that can switch from everyday brown to the color of cornflowers.

And even if "Underworld: Evolution" sometimes feels as if it were made by machines and not by human beings, its production design, a mingling of Celtic and art nouveau influences, looks as if it were put together from the contents of world's greatest flea markets through the ages. One of the movie's most mysterious characters (to reveal his identity would be giving away too much of any plot, even one this crazy and cumbersome) is played by Derek Jacobi, who brings just the right touch of elusive sophistication to the part. But his headquarters, located on a vintage 20th century battleship, threaten to steal his thunder: Behind his desk is a giant bronze relief of a woman in flowing tresses (and little else) who looks as if she has stepped straight from a Mucha poster. His work area is flanked by beaux-arts torchiers. And is that a Regency sideboard along the wall there? If there really needs to be a third installment of "Underworld," it ought to be about the interior decorators of this fantasy universe. Vampires and werewolves are so last year. Get ready for "Underworld: The Tchotchke Hunters."