Will you miss "The West Wing"?

Salon staffers explain why they stopped watching -- or why they're still hanging in there. 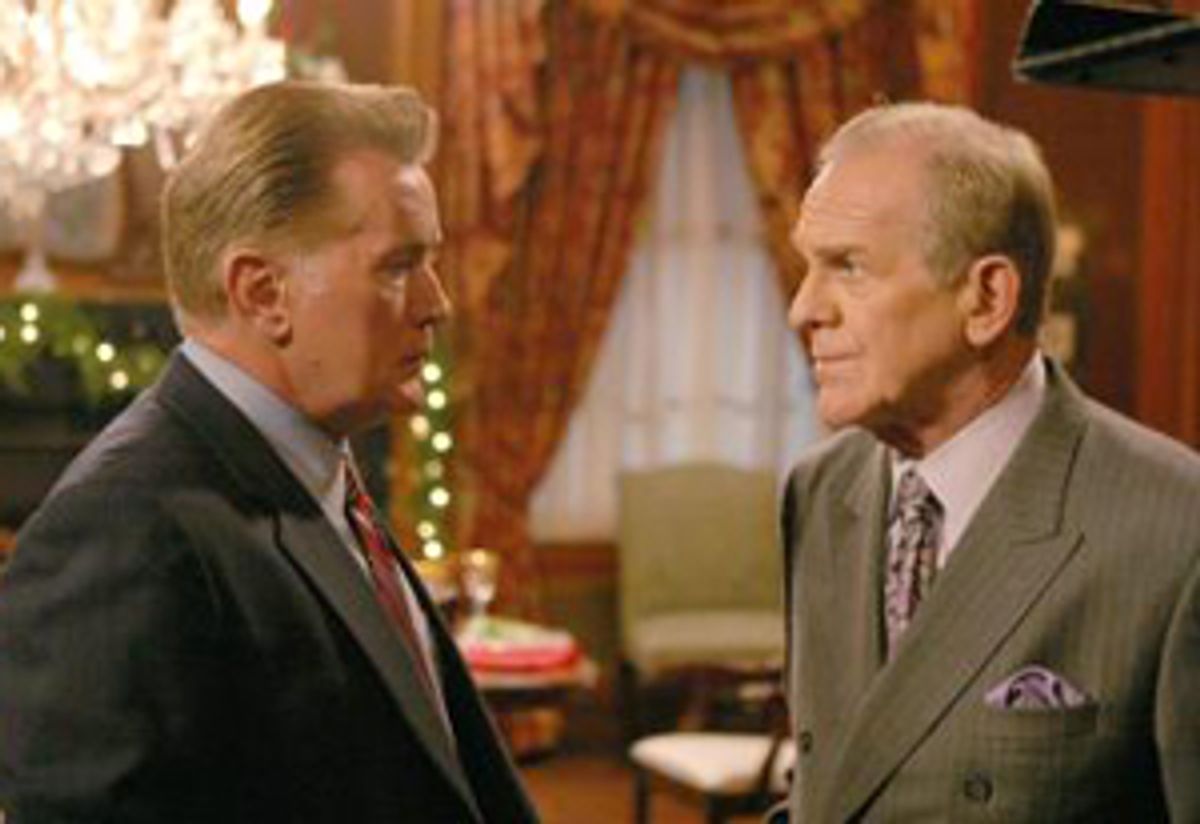 Chewy dialogue and other irritants
An ex-boyfriend of mine used to describe the dialogue on "The West Wing" as "chewy." He was an actor, and that one pretentious yet obscure adjective prejudiced me against the show from the very beginning, that and the fact that I wasn't permitted to speak during the entire hour "The West Wing" aired, lest my then-boyfriend miss some particularly chewy exchange. Thanks in part to these extenuating circumstances, I quickly grew to resent the show's nonstop onslaught of political information, packed tightly into a tart coating of wit and understatement, and then volleyed to and fro, from C.J. to President Bartlet, from Josh to Toby as they strode purposefully through the corridors of the White House. How could every character on the show speak in the same clipped, stylized, clever monotone? What single human could manage that kind of talk, let alone manage it while pacing swiftly through those hallowed hallways? What kind of demented geniuses could shift from spirited jokes to snide remarks to solemn pronouncements, all the while knowing that the fate of the free world rests in their hands?

Oh, but these weren't normal human beings. The characters who populated "The West Wing" weren't just clever super-geniuses capable of bandying their wit to and fro without breaking their stride, they were also deeply moral humans the likes of which you'd be lucky to encounter in your lifetime. Every one of the characters, each one, was so incredibly, absurdly righteous and solemn and high-minded and idealistic. And they never faltered! Sure, Leo had his drinking problem and Sam sometimes slept with the wrong woman, but no one took advantage of anyone or made any really big, really terrible missteps, at least not for the first few years on the air. No one was swayed by lobbyists throwing favors around. No one was remotely self-interested. They all had the good of the nation on their minds!

When "The West Wing" was at its best, I hated it -- or maybe I hated my boyfriend? Sometimes it's tough to tell the difference. But now that "The West Wing" is about to leave the air, like an irritating but charming houseguest, I feel a little sad to see it go. Maybe my sudden rush of nostalgia springs from the realization that no show about the executive branch is likely to compare to "The West Wing" at its best. "Commander in Chief," for one, makes it all too clear how difficult it is to keep a show like this fresh and interesting for the viewer. Veering into schmaltzy or sentimental territory, revisiting tired old stories everyone's seen before -- the pitfalls of dramatizing the presidency are countless. Looking back on "The West Wing," with its smart, lovable characters -- lovable even when we didn't know that much about them (Toby), or they had the same vague crushes for years and years (Josh and Donna) -- it's tough not to wish they could stick around for a few more years.

Is Geena Davis alone an acceptable substitute for "The West Wing's" remarkable cast? Are the flashy theatrics of "E-Ring" supposed to distract us from the fact that the show has the sort of oversimplified grasp of foreign policy that calls to mind Cold War thrillers of the '80s? Even taking into account the melodrama of the last few seasons, no other political show can quite compare to the charisma and intelligence of "The West Wing" at its prime.

And that's not to mention its chewiness.

Nerd Heaven
At its peak, "The West Wing" was Nerd Heaven: You learned how the government worked, that it was corrupted but could be saved. You learned Gilbert & Sullivan arcana (Rob Lowe's character was especially useful on this point). You learned that the president can learn to be a better dad, and that high-powered Washington feminists sometimes go home to sit on the floor in an old pair of jeans and listen to "Astral Weeks" and cry.

All this emotion, all this loving chitter-chatter about the Middle East and the tobacco lobby and the "press corps," was self-evidently the work of one man, perhaps more so than any major television drama in the medium's history. If Aaron Sorkin was really a pothead, that would make sense; the peculiar fugue state marijuana intoxication can produce in a highly driven Type A personality might well result in a meticulous and obsessive universe like that of "The West Wing." When Sorkin left the show, its new "runners" tried to keep the nerdiness intact, but the pull of melodrama -- the polestar toward which all TV inevitably gravitates -- was too strong.

When John Goodman, playing a right-wing Republican House speaker, temporarily became president, someone remembered the right geeky details: He had to resign his congressional seat, because you can't work for two branches of government at the same time. So the scene seemed right, but the impulse driving it had gone all askew. For one thing, I can't remember what crisis had provoked this improbable event, and I don't care. In Sorkin's "West Wing," the details -- the pure force of procedure, Machiavellian as it might be in its short-term operations -- always trumped the melodrama, and there was a kind of Yale debating-club certainty that procedural purity and doctrinal virtue went hand in hand. I don't think this has ever been true in the real world, but it made for reassuring television. As the real executive branch in Washington set out to destroy the constitutional separation of powers and swaddle itself in ever-thicker garments of imperial authority, "The West Wing" tried to follow, dreaming big neocon dreams and inhaling the fumes of terrorist fantasies. So it lost its soul. But then, haven't we all?

Too close for comfort
"The West Wing" lost me when it became no longer possible, through no fault of its own, for me as an avid television viewer to take pleasure in imagining any kind of White House at all other than the one currently occupied, anything other than a place that had come to symbolize something deeply troubling and perverse. Imagine trying to watch "Hogan's Heroes" in, say, 1944, or, for that matter, for heaven's sake, "The Producers" around the same time. It just is not possible to gain the kind of distance on reality necessary to indulge in an imaginative construct bearing some slight resemblance to perhaps our dreams of what the White House -- a good White House, an interesting, engaged White House full of interesting, engaged people -- might be like. The actual West Wing just totally ruined the show for me.

Sorry, but there are limits. Anybody care to watch, say, a series set in a West Virginia coal mine? It's kinda like that.

I know it's limp -- but I'm still hooked!
There was a time -- maybe in the show's first or second season, back when the people from the Emmys still delivered truckloads of golden statues to Aaron Sorkin's shroom-filled room at the Four Seasons -- when it was cool to watch "The West Wing." No longer, of course; the cool cats who like their TV fast and smart long ago moved on to other shows. (I've heard "The O.C." will change your life.) The thing is, not me. Though I know the show long ago went limp -- oh, do I -- I'm still hooked. As far as I can tell, I've never missed a single episode in all seven seasons; indeed, on Sunday, the very day that NBC announced it was canceling the series, I caught up on the latest four episodes, a TiVo-aided marathon of mediocre drama, middling political intrigue and, afterward, a whole lot of guilt.

Why am I still watching? Oh, who knows; addiction's a difficult beast. Intellectually, I can see that the show's been almost completely dull since May 2003, when Sorkin penned his last episode. And if I were truly honest, I'd probably see its fall occurring before then. After all, even during Sorkin's prodigious tenure, the show looked to be going for some kind of record in jumping the shark: an assassination attempt in the first season; the first daughter's kidnapping in the fourth; a sudden, unexpected death to wrap up each of the first three seasons; and the occasional flare-ups of over-the-top pyrotechnics -- Martin Sheen yelling at God in Latin -- that made me embarrassed for Sorkin.

This is going to sound unbearably corny, but here goes. The truth is, watching "West Wing" is palliative; it calms me, bathes me in nostalgia and hope. (I told you it was corny.) Even now --- especially on the occasional episodes by Deborah Cahn, a writer whose style closely resembles Sorkin's; networks, give her a show! -- you can see glimpses of those magical early years, back when Sorkin was in his groove, and the show looked and sounded better than anything else on television (including "The Sopranos"). But watching "West Wing" now doesn't only prompt memories of earlier seasons -- it prompts memories of an earlier season in politics, those mirthful, merry '90s, when the worst thing we had to worry about in our president was a shameful weakness for a girl in a thong.

The show is a fiction, certainly. There isn't a politician in the world like Jed Bartlet, an exceedingly smart, (mostly) honest man with principles, who doesn't govern by politics, who takes counsel from the cooler, calmer heads on his staff, and even from his opponents. Today in politics, you won't find anyone half as good. And that's precisely why I watch: Some people might look at "The West Wing" under the Bush administration as a fantasy. I look at it as a blueprint. We should be so lucky to have a real White House like that. And maybe, one day, we will. Until then, it's nice to have it on TV.

When did you stop watching "The West Wing"? Or are you still loving it after all these years? Share your opinions by clicking below to post a letter.