Will BlackBerry go out of season? 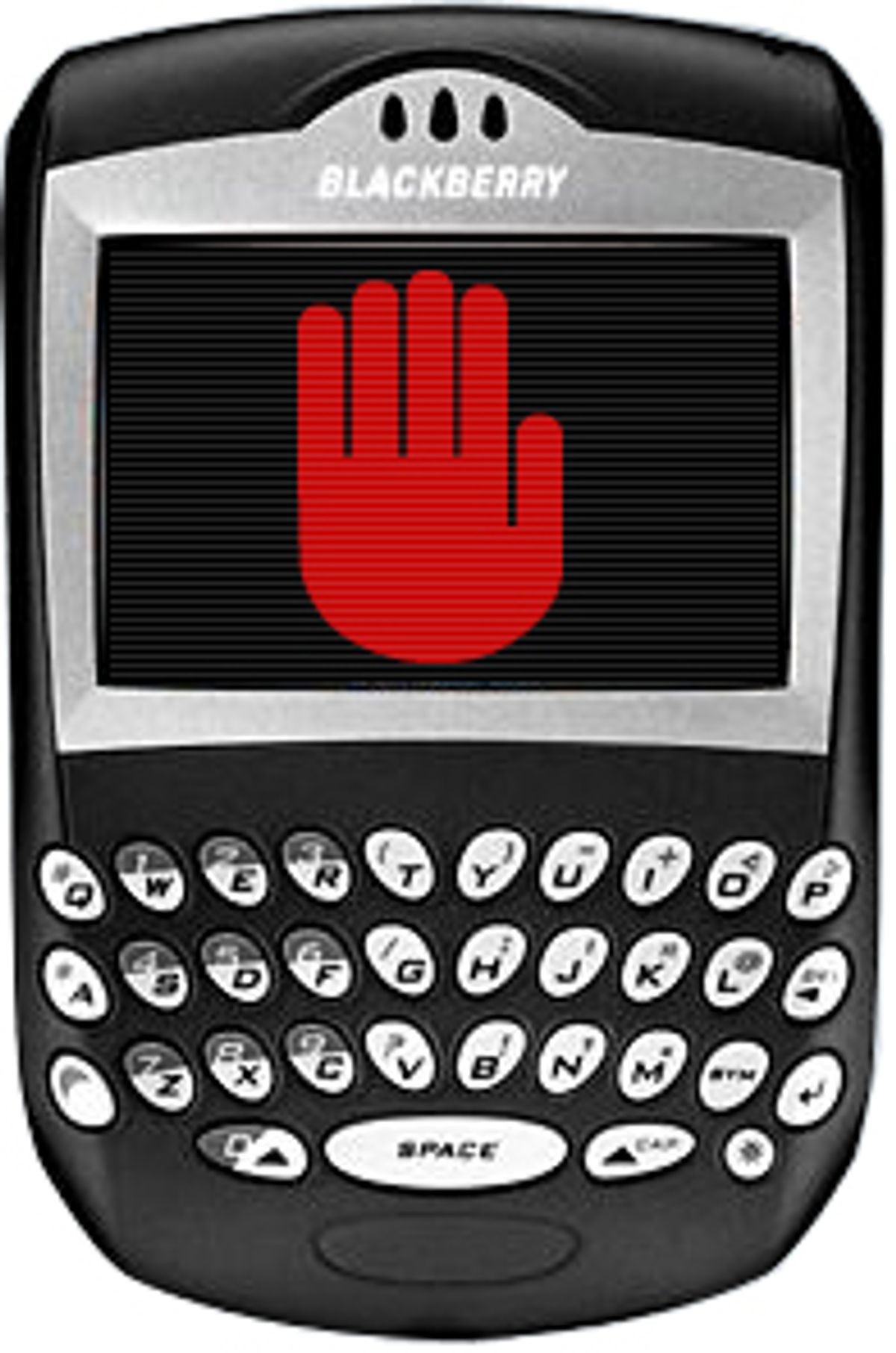 For everyone who ever wished that BlackBerrys were illegal, they soon could be. The ubiquitous hand-held e-mail-phone devices often provoke rage in would-be conversation partners, disgust in onlookers, and fury in those forced to endure their incessant beeping.

But Type A workaholics everywhere are in agony, as a mano a mano battle brews over this ostentatious icon of the information elite. In one corner is Research in Motion Ltd., the Canadian firm in Waterloo, Ontario, that created and manufactures BlackBerrys. In the other is NTP Inc., a small Virginia-based U.S. patent firm that apparently holds the patent on BlackBerry's wireless transmission of e-mail.

The fight cuts to the heart of the battle over intellectual property rights in an information economy. With rising competition at home and abroad, companies are desperately trying to stay current by offering new, innovative goods such as hand-helds, downloadable music, and satellite radio, all at sonic speeds of production. But the obsession with novelty is risky business when it is often unclear whether someone else may already own the idea.

NTP's patents concern wireless transmission of e-mail by radio frequency to a mobile receiver like a BlackBerry. The patents were initially registered by NTP founder Thomas Campana, in 1991, to patent a wireless communication system he created for his original pager company. NTP holds that BlackBerry is encroaching on NTP's patents in its wireless e-mail delivery to its hand-helds. BlackBerry insists its proprietary software does not impinge upon NTP's territory.

On Monday, the U.S. Supreme Court refused to review an appeals court ruling on the case. Specifically, the appeals court held that although RIM's main relay station is based in Canada, the company must still abide by U.S. patent law, given that customers use the device inside U.S. borders. The high court decision means that all BlackBerry service could be suspended as soon as Feb. 1 if no settlement is reached, causing high-powered frenzies from Wall Street to Waikiki. (BlackBerry has 4.3 million U.S. subscribers.) But the U.S. government isn't entirely on the same page. In December 2005, the U.S. Patent and Trademark Office announced that it intended to reject NTP's five patents and its arguments as "unpersuasive." It is still reviewing the case.

RIM put a brave face on Monday's Supreme Court setback. "[W]e were not banking on a Supreme Court review," Mark Guibert, RIM's vice president for corporate marketing, said in a statement. Should a district court judge in Richmond, Va. -- who sided with NTP in 2003 -- rule that BlackBerry must halt its services before the patent office makes its final decision, BlackBerry has created "workaround software" to keep the company in business, Guibert said. NTP could not be reached for comment.

The case was almost resolved last year, when RIM tentatively settled with NTP for $450 million. That agreement imploded, and now the settlement price has skyrocketed to somewhere between $700 million and $1.5 billion, as BlackBerrys have become more popular. With so much money at stake for both companies, analysts say a settlement remains possible.

In the meantime, Karl Marx would be amused to watch RIM and NTP tear each other apart. Now that capital (like communication) is increasingly virtual, those who think they own the means of production may need to double-check their capitalist credentials. It turns out that it's no longer enough to invent a product, build a factory and dominate the market as RIM did. A clever investor such as NTP, a company whose sole purpose is to hold patents, may turn out to be your boss.

The internecine ownership arguments are having some concrete trickle-down effects. While Mommy and Daddy fight over patent rights, the BlackBerry-toting spawn are terrified at the possibility of mobile e-mail deprivation. Ontario-based RIM has been so dominant in convincing American overachievers to buy BlackBerrys that the "South Park" creators should think about adding it to their song, "Blame Canada." If BlackBerrys go dark, so will the mood of much of Wall Street. While this may delight the pen-and-ink crowd, it will likely (if temporarily) cost millions in lost time, reduced efficiency, and therapy bills.

It will also be a significant victory for intellectual property rights. BlackBerry's classic market success will have been brought to heel by a small U.S. holding company that doesn't produce a thing, speculating on products that may never exist. In other words, BlackBerry will have been defeated by an idea. Marx would have been proud.