Canada just elected a right-wing prime minister, Stephen Harper. But he had to distance himself as far as possible from George W. Bush to win. 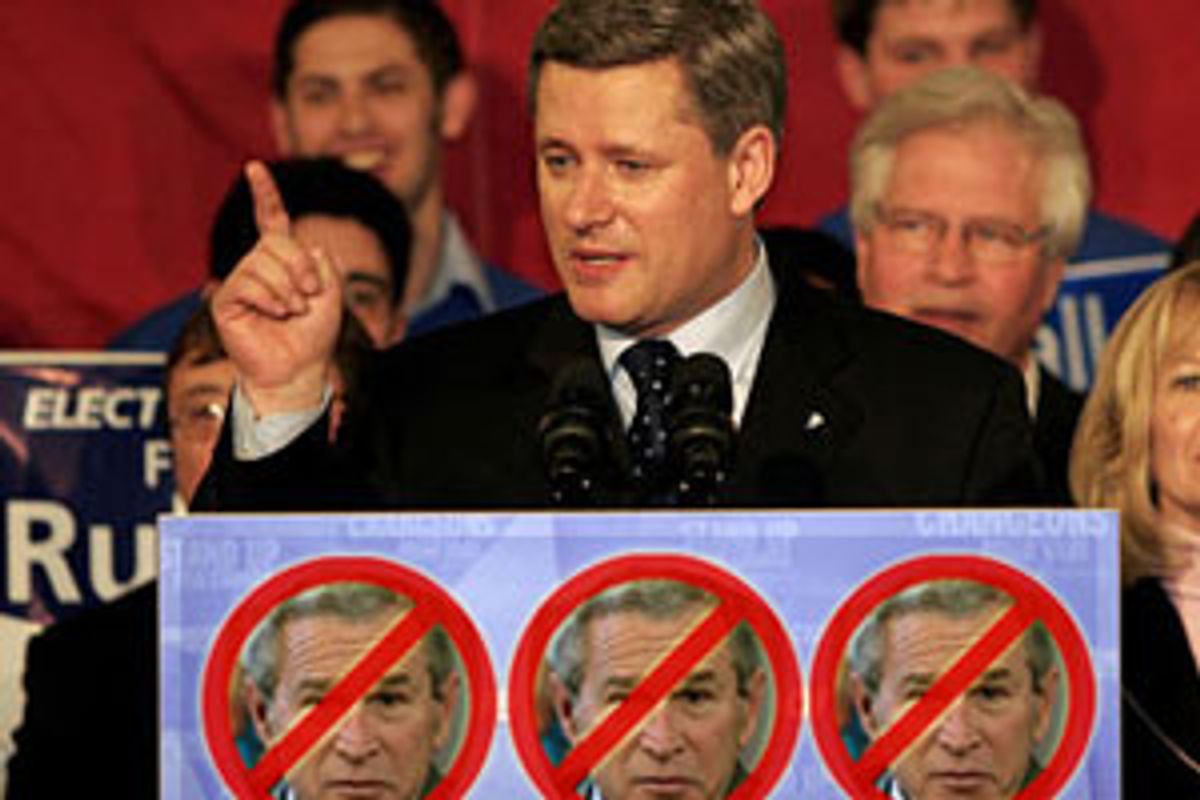 So maybe you've heard, Canada just got less cool. For some reason (which I'll try to explain) we've gone and elected a guy who's been studying the Reagan playbook all his political life, a Western-bred neocon who'd fit right into the Bush Cabinet (except for the turtleneck, which I'll also try to explain).

Most of the time, Canada is ruled by a party that Canadians are unashamed to call the Liberals. But now the new prime minister is Stephen Harper, leader of the Conservative Party. Dubya's gang has every reason to claim him as one of their own. Many of Harper's closest advisors adhere to the same Straussian philosophy that inspires the fevered manipulations of Karl Rove and company. Harper is against gay marriage, pro missile shield, is eager to scuttle Kyoto, and would have sent Canadian troops to Iraq. In fact, in 2003 when then Liberal Prime Minister Jean Chretien refused to join Bush's "coalition of the willing," Harper, then the opposition leader in Parliament, published a letter in the Wall Street Journal calling that a "serious mistake" and apologizing. (Some here called that treason, but never mind. And I'll get to the turtleneck shortly.)

By that point Harper had made a kind of toastmaster's skit out of slagging his country while embracing the American way. Sample: "Canada appears content to become a second-tier socialistic country, boasting ever more loudly about its economy and social services to mask its second-rate status."

And by that point he was well along in his avowed effort to build a new Canadian right-wing base upon (this may sound familiar) gun rights lobbies, anti-choice crusaders, fundamentalist churches and other social conservative groups. In this election, for example, Harper's Conservatives drew a couple of candidates from Canada's wing of Focus on the Family, Dr. James Dobson's hard-right evangelical organization.

Where you tend to find such folks thickest on the ground is Harper's home province of Alberta, it being Canada's oil-rich version of Texas. Alberta's values are so different from those of most Canadians, yet so appealing to Harper, that he once urged his fellow Albertans to build "a firewall" around the province to repel the secular humanist forces stalking the wilds of Canada beyond.

In his new job, of course, Harper is now in charge of the whole of Canada, which means, as someone suggested, that Toronto had better get ready to build its own firewall.

So yeah, U.S. conservatives have plenty of reason to happily assume that Canadians have finally gone all red state up here.

Except they haven't. Not much at all, really. The funny thing about Harper is that the only way he could win was by talking, and looking, like he wasn't so very conservative after all.

Given that the U.S.-led war in Iraq remains profoundly unpopular among Canadians, what about it? Still time to join in, you know? Naaah. Changed his mind on that, too. In a letter he sent to the Washington Times in December, he said, "On Iraq, while I support the removal of Saddam Hussein and applaud the efforts to establish democracy and freedom in Iraq, I would not commit Canadian troops to that country. I must admit great disappointment at the failure to substantiate pre-war intelligence information regarding Iraq's possession of weapons of mass destruction."

Some of Harper's top people do happen to believe in creationism. Well, so what? Harper himself took pains to declare that he, personally, had "evolved."

As the election wore on, it got pretty comical. Like when the notoriously stiff Harper suddenly traded his crisp white shirts, dark suits and blue ties for a mouse-gray turtleneck. Cool Canada indeed  circa 1978 at the ski lodge.

Meanwhile, the word went out to all Conservative candidates with ardently right-wing views about gays, guns, God, you name it: Stifle yourselves. The pronouncement even extended below the 49th parallel. In the later days of the election, e-mails started landing in the in boxes of American conservative pundits telling them to self-censor their public enthusiasm for Stephen Harper and what he was trying to pull off up here.

The problem, you see, is that nothing can sour a Canadian political candidate's chances like a kind word from the general direction of George Bush. Proof: Just trying to be helpful, the Washington Times ran a Dec. 2 editorial heralding the coming of Stephen Harper, "the most pro-American leader in the Western world ... If elected, Mr. Harper will quickly become Mr. Bush's new best friend internationally and the poster boy for his ideal foreign leader."

It's the kind of endorsement you pray for in Canada -- if you're the opponent. Soon enough the television screens were full of Liberal Party ads quoting the Washington Times' prediction that a Harper victory would "put a smile on President Bush's face." The ad voice-over follows with: "Well, at least someone will be happy, eh?"

Devastating as such ads were, and even with the turtleneck, Harper won. Why, then? I'm guessing you're not wanting too nuanced a treatise on Canada's parliamentary democracy, so let's just boil it down to several facts:

1) The Liberal Party was mired in a tawdry corruption scandal. It involved the laundering and skimming of taxpayers' money through various fraudulent initiatives supposedly meant to make French-speaking Quebec feel fonder of English-speaking Canada (as if that is likely to happen any time soon).

2) The American motto may be "Life, liberty and the pursuit of happiness," but up here it's "Peace, order and good government. " Catch those last two words. They're the kicker for a reason. Canadians decided to punish a government for not being good. And they did. Which left the door open for the Conservatives to win enough votes to form a minority government.

3) The vote was split among four parties, with the Conservatives getting only 36 percent of the total vote. The other three parties are well to the left of the Conservatives, and the numbers of seats broke down like this: Conservatives: 124. Liberals: 102. Bloc Quebecois: 51. New Democratic Party: 29. Independent: 1.

Another way to look at it would be:

Conservatives who ran as if they weren't very conservative: 124.

Everyone else who said they sure were a hell of a lot less conservative than the Conservatives: 183.

See why Canadians aren't yet jamming the phone lines to find out how to move to Vermont or Marin County, Calif.?

Some left-leaning Canadians even prefer to take a reassuring lesson from Monday's vote. After all, the Liberals had been in power for 12 years, were mired in muck, ran by all accounts one of the worst campaigns ever  and still the Conservatives couldn't muster a majority government, which is what it takes to really call the shots and stay in power for more than a year or two.

And yet. Just two years ago, the perhaps not yet fully "evolved" Stephen Harper made certain Rove-esque statements to a group of influential Canadian right-wingers. In that 2003 address he laid out his long-term strategy for transforming Canadian politics along American, neoconservative lines. Key to building a new, broader base: the hot-button "family values" that Reagan and his successors have pushed so effectively.

"The real agenda and the defining issues have shifted from economic issues to social values," said Harper. "Many traditional Liberal voters, especially those from key ethnic and immigrant communities, will be attracted to a party with strong traditional views of values and family. This is similar to the phenomenon of the 'Reagan Democrats' in the United States, who were so important in the development of that conservative coalition."

In the speech, Harper told his followers to be patient, to be satisfied with "the incrementalist approach" to fighting the culture war he was proposing. Seen from that perspective, Canada's new prime minister has just somewhat stealthily moved his country a significant increment further down the neoconservative road.

The day after the election, people were buzzing about when Harper would go to Washington for his photo op, one of those manly, beaming handshakes with President Bush. The ones most eager to see it happen seemed to be the ones gunning to topple Harper's minority government the first chance possible.