In Kathryn Davis' lustrous new novel, cosmic forces seep into a small Vermont town and an adolescent girl brings a man back to life. 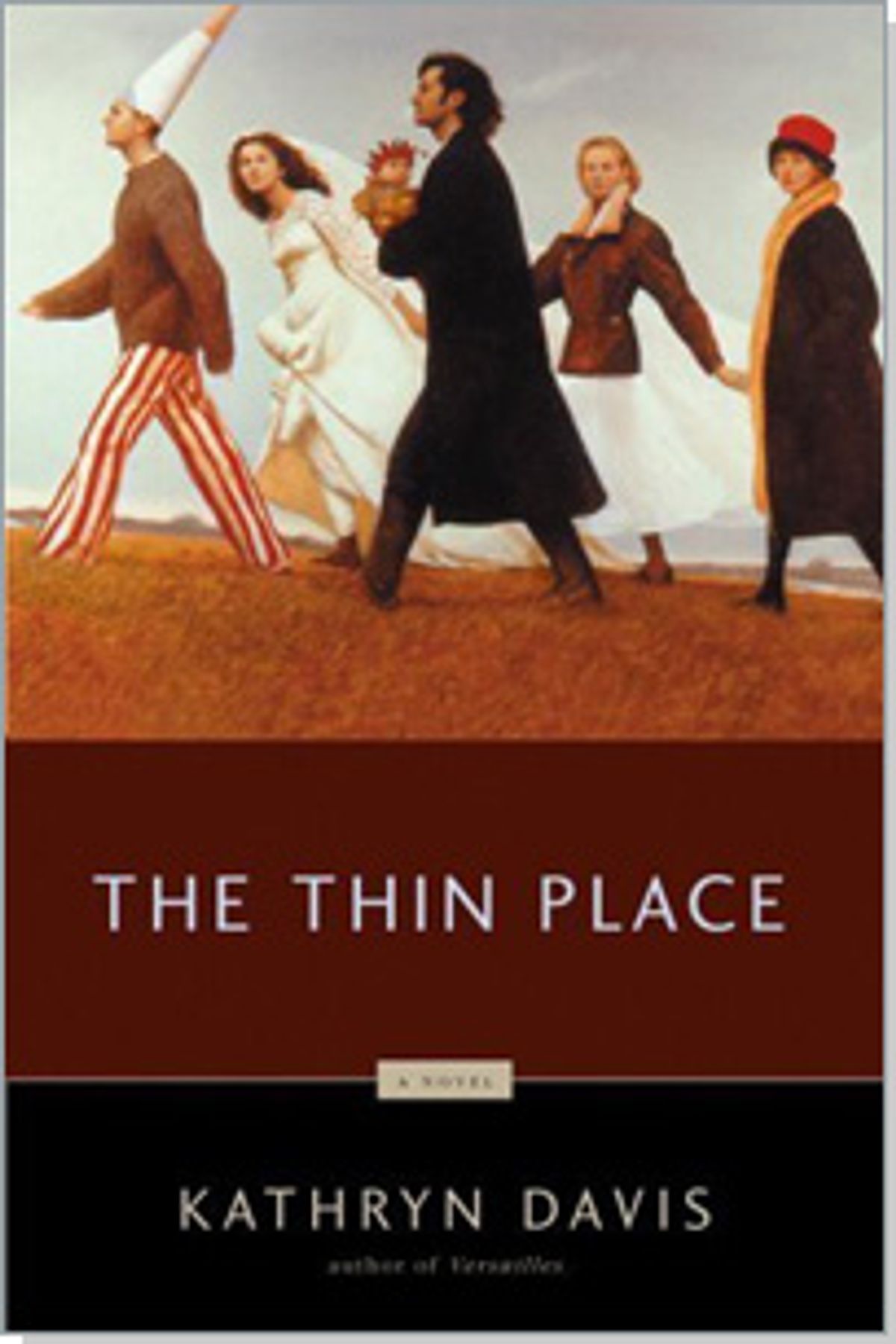 Kathryn Davis' fiction -- her best-known novel is 1999's "The Walking Tour -- has a cult following that's in keeping with the prickly, gnomic qualities of her earlier books. They're the kind of novels that strongly impress you with the author's stylish intelligence even if it's not always easy to understand what she's getting at. Her latest, "The Thin Place," a more transparent and accessible book that may win her more readers, is the story of Varennes, a small town in northern Vermont where the barrier between the everyday world and a realm of cosmic forces has nearly worn through.

The novel takes place over the course of a summer and begins when three 12-year-old girls, inseparable friends -- whose relationship, due to the usual eroding effects of growing up, is "about to come unlinked forever" -- find a neighbor lying dead on the town beach. One of the girls, the fierce, sarcastic Mees Kipp, avails herself of an ability she's harbored for years and brings the middle-aged man back to life. But Mees' miraculous gift is less the center of the novel than a gleaming speck in its lustrous fabric, a single sequin sewn onto a bolt of satin.

"The Thin Place" is an ensemble piece; the point of view is assembled from over a dozen characters, not all of them human. A dog, a couple of cats, some beavers, a moose and even, for a moment, a patch of lichen take part in the chorus. Occasionally, passages adopt a geological perspective, one in which the action of the glacier on the Vermont landscape is memorably likened to "a girl riding her lover." "Everyone prefers to stick with the subject of people," Davis writes, "but how shortsighted to leave out the question of how we got here and where we're going."

In a frame of reference that accommodates millions of years, the other thin place referenced by the title is the relatively infinitesimal period of time that human beings and their travails have dominated this spot in the universe. But rather than dwarfing the characters and making their problems seem meaningless, Davis shows how even events that her human characters barely notice are like keyholes through which eternity can be glimpsed. "The Thin Place" is an offbeat religious book, its guiding spirit one Julian of Norwich, a medieval mystic whose treatise on a series of visions she had in the late 14th century, "Revelations of Divine Love," is the earliest known book by a woman in English. It's not so much Julian's Christianity that Davis subscribes to as her ecstatic celebration of the physical universe. "There is probably nothing more beautiful and implausible than the world," she writes.

"The Thin Place" resembles an illuminated manuscript without the pious main text. It's all charming and vivid marginalia, a bit like "Les Tres Riches Heures Du Duc Du Berry," a medieval daybook that's especially precious because it shows us people doing chores, animals going about their business, the daily pleasures of the seasons. In addition to the three girls on the brink of puberty, there's Billie Carpenter, a widow who undermines the town's beaver extermination campaign, an adulterous wife restoring the diary of a schoolteacher responsible for a local tragedy over a hundred years ago, a banker with four divorces under his belt looking for a new wife, and Helen, a 92-year-old resident of the Crockett Home for the Aged, who is locked in implacable and merciless warfare with the home's sleek, power-mad proprietor.

A kind of wry humor is the one constant in "The Thin Place," but with exquisite skill Davis tailors every observation to the character making it. One of the girls, a reader of genre fiction, hates the central air conditioning at a friend's house, "which made you feel like a droid held in suspended animation, waiting to be granted the gift of human life." Kindhearted Billie muses that "there was almost nothing more touching than an animal with something in its mouth. The bright eyes, the wet nose, the implicit sense of a project under way that far surpassed human understanding." Mees' dog, Margaret, thinks, "The tall one never shut the back door so it stayed shut. Push it with your nose! Margaret always got in trouble when she ran away like this but it was golden ... The rule was: bad dog! Bad Margaret! Bad to run off like that! Bad dog! Bad!"

And then there are flashes of what seems like Davis' own eccentric voice, as when the narrator explains that "in terms of consciousness, corn isn't particularly evolved, endlessly preening itself for having once been used as legal tender in place of gold and silver. Like most feed crops it's fascist at heart, taking strength from numbers. It started out as grass. It doesn't know how to talk." (As compared to lichen, which murmurs a strange but lovely mantra: "manna star fold star, star star fold reindeer, fold fold fold fold.")

Getting a grip on Davis' purpose here can be a little like grasping the lichen's weird language. It's not that "The Thin Place" is cryptic, exactly, but its mysteries come at you sidewise, through rhythms and inferences, rather than head-on. The novel culminates in an incongruous moment of violence that somehow feels right -- as a corrective to the imbalance represented by Mees' gift and as a way of jolting certain characters out of their holding patterns. What we're left with is Varennes, a place whose inhabitants don't realize that everything that happens in it is both part of an endlessly repeating cycle and utterly miraculous.