How do you like your democracy now, Mr. Bush? 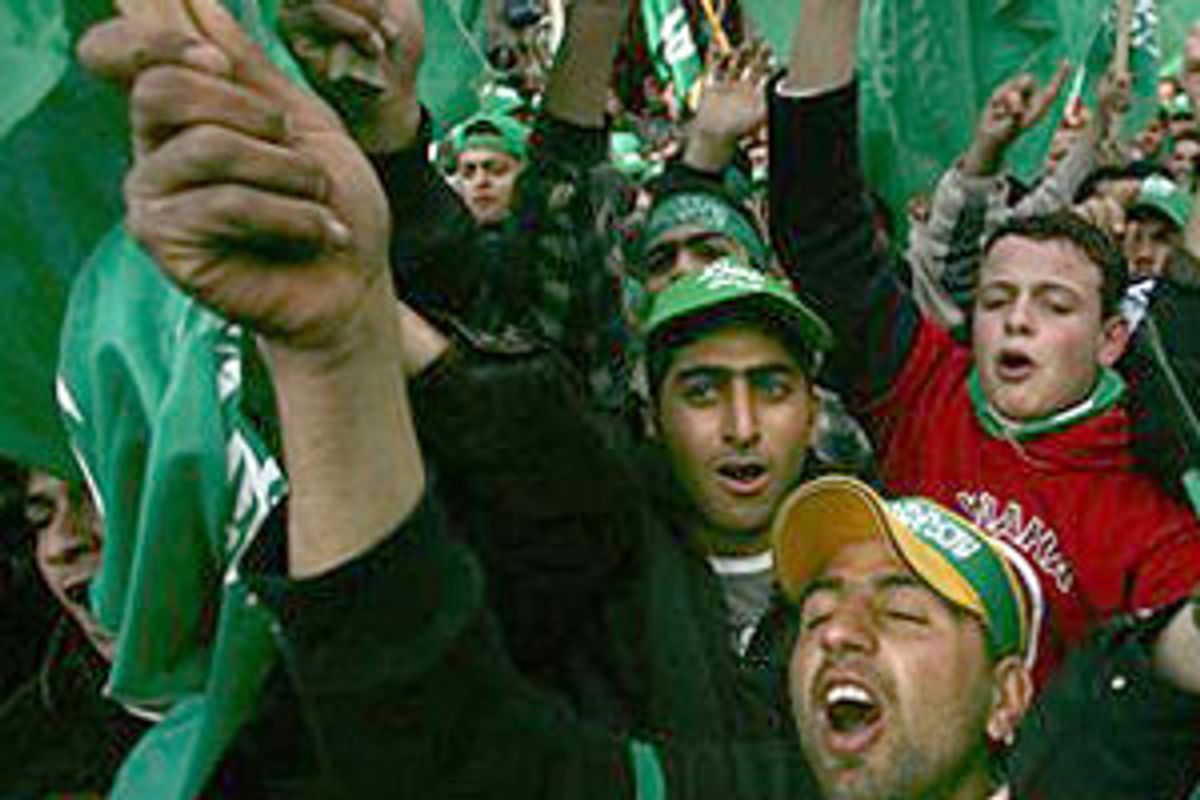 The stunning victory of the militant Muslim fundamentalist Hamas Party in the Palestinian elections underlines the central contradictions in the Bush administration's policies toward the Middle East. Bush pushes for elections, confusing them with democracy, but seems blind to the dangers of right-wing populism. At the same time, he continually undermines the moderate and secular forces in the region by acting high-handedly or allowing his clients to do so. As a result, Sunni fundamentalist parties, some with ties to violent cells, have emerged as key players in Iraq, Egypt and Palestine.

Democracy depends not just on elections but on a rule of law, on stable institutions, on basic economic security for the population, and on checks and balances that forestall a tyranny of the majority. Elections in the absence of this key societal context can produce authoritarian regimes and abuses as easily as they can produce genuine people power. Bush is on the whole unwilling to invest sufficiently in these key institutions and practices abroad. And by either creating or failing to deal with hated foreign occupations, he has sown the seeds for militant Islamist movements that gain popularity because of their nationalist credentials.

In Iraq, which is among the least secure and most economically fraught countries in the world, the Dec. 15 elections brought into Parliament a set of powerful Shiite fundamentalist parties and a new force, the Muslim fundamentalist Iraqi Accord Front, which gained most of the votes of formerly secular-minded Iraqi Sunni Arabs. Some IAF politicians are suspected of strong ties to Iraq's Sunni insurgency. In Egypt, last fall's election increased representation for the fundamentalist Muslim Brotherhood from 17 to more than 70 seats in Parliament, making that group a key political player for the first time in Egyptian history. Decades ago, the party once assassinated a prime minister and attempted to assassinate President Gamal Abdul Nasser, but now maintains it has turned to moderation. It aims at the imposition of a rigid interpretation of Islamic law on Egyptians, including Egyptian women.

Now Hamas, or the Islamic Resistance Movement, a branch of the Egyptian Muslim Brotherhood, has come to power in Palestine. In his press conference on Thursday, Bush portrayed the Palestinian elections in the same way he depicts Republican Party victories over Democrats in the United States: "The people are demanding honest government. The people want services. They want to be able to raise their children in an environment in which they can get a decent education and they can find healthcare." He sounds like a spokesman for Hamas, underlining the irony that Bush and his party have given Americans the least honest government in a generation, have drastically cut services, and have actively opposed extension of healthcare to the uninsured in the United States.

But the president's attempt to dismiss the old ruling Fatah Party as corrupt and inefficient, however true, is also a way of taking the spotlight off his own responsibility for the stagnation in Palestine. Bush allowed then Israeli Prime Minister Ariel Sharon to sideline the ruling Fatah Party of Yasser Arafat, to fire missiles at its police stations, and to reduce its leader to a besieged nonentity. Sharon arrogantly ordered the murder of civilian Hamas leaders in Gaza, making them martyrs. Meanwhile, Israeli settlements continued to grow, the fatally flawed Oslo agreements delivered nothing to the Palestinians, and Bush and Sharon ignored new peace plans -- whether the so-called Geneva accord put forward by Palestinian and Israeli moderates or the Saudi peace plan -- that could have resolved the underlying issues. The Israeli withdrawal from Gaza, which should have been a big step forward for peace, was marred by the refusal of the Israelis to cooperate with the Palestinians in ensuring that it did not produce a power vacuum and further insecurity.

Frustrated, the Palestinian public predictably swung to the far right. Their embrace of Hamas does not indicate that most Palestinians are dedicated to destroying Israel; polls show that most support a two-state solution and are weary of the endless violence. Rather, they are sick of the Palestinian Authority and believe that Hamas will be more effective negotiating partners with the Israelis. As a Saudi political talk show host told the Associated Press, "They [Hamas] will be the Arab Sharon. They will be tough, but only a tough group can snatch concessions from Israel."

In a mystifying self-contradiction, Bush trumpeted that "the Palestinians had an election yesterday, the results of which remind me about the power of democracy." If elections were really the same as democracy, and if Bush was so happy about the process, then we might expect him to pledge to work with the results, which by his lights would be intrinsically good. But then he suddenly swerved away from this line of thought, reverting to boilerplate and saying, "On the other hand, I don't see how you can be a partner in peace if you advocate the destruction of a country as part of your platform. And I know you can't be a partner in peace if you have a -- if your party has got an armed wing."

So Bush is saying that even though elections are democracy and democracy is good and powerful, it has produced unacceptable results in this case, and so the resulting Hamas government will lack the legitimacy necessary to allow the United States to deal with it or go forward in any peace process. Bush's double standard is clear in his diction, since he was perfectly happy to deal with Israel's Likud Party, which is dedicated to the destruction of the budding Palestinian state, and which used the Israeli military and security services for its party platform in destroying the infrastructure of the Palestinian Authority throughout the early years of this century. As Orwell reminded us in "Animal Farm," some are more equal than others.

President Mahmoud Abbas of Fatah had earlier been elected in a separate process and could continue in office if he chooses to work with a Hamas-dominated cabinet. He had earlier hinted that he would resign if his party lost. Asked about a possible resignation, Bush said in his typically tongue-tied way, "We'd like him to stay in power. I mean, we'd like to stay in office. He is in power; we'd like him to stay in office." Khaled Mashaal, the Hamas leader who is in exile in Syria, said that his party would be willing to work with Abbas as president, according to a party spokesman.

But then when Bush was asked if the United States would end aid to the Palestinian Authority if a Hamas government was formed, he implied that it would, unless Hamas changed its platform, which opposes the existence of the state of Israel on the grounds that the territory belongs to the Palestinians. He said, "Well, I made it very clear that the United States does not support political parties that want to destroy our ally Israel, and that people must renounce that part of their platform."

Bush implied that Hamas is dedicated to unremitting violence against Israel. And since 1994 its military wing has launched many suicide attacks against Israelis, killing hundreds of people, most of them civilians. But in fact it has observed a more or less effective truce for about a year -- indeed, as an important study carried out by the respected International Crisis Group pointed out, it has observed the truce far more reliably than Fatah. And Hamas' leaders have affirmed that they are willing to continue the truce if Israel refrains from aggressive violence toward them.

Despite Hamas' founding position that the Israeli state is illegitimate, violence is not foreordained. A Hamas leader, Mahmoud Zahar, told the Associated Press that his party would continue what he called its year-old "truce" if Israel did the same. "If not," he added, "then I think we will have no option but to protect our people and our land." More fundamentally, even Hamas' charter could change. As the ICG points out, Hamas "has accepted the principle that there is no religious prohibition against negotiating or co-existing with Israel and that the provisions in its charter providing for Israel's destruction are not indelible." Even President Bush, in his measured response to the elections, seemed to hold out hope that Hamas would adopt a more pragmatic stance.

To be sure, many Israelis believe that Hamas is only using the truce to rearm, that it will never change its opposition to the very existence of Israel, and that any negotiations with the Islamist group will only weaken the Jewish state. And Hamas' failure to speak clearly about its intentions does nothing to allay such fears.

But no one has ever put Hamas to the test. Neither Bush nor Israel have ever made good-faith efforts to resolve the underlying issues, preferring to issue moralistic denunciations that ignore the reality on the ground. The bitter fruits of that shortsighted policy are now evident. In Iraq, Bush has been forced -- albeit too late -- to act pragmatically, negotiating with the leaders of Sunni insurgents whom his administration earlier denounced as "terrorists." He and Israeli leaders should follow the same course in Palestine and try to engage Hamas in a realistic, good-faith political effort to resolve the conflict.

There is no evidence that either party will do so. Bush announced early in his administration his unwillingness to do anything that would challenge Sharon. For his part, acting Israeli Prime Minister Ehud Olmert is following in Sharon's footsteps. He said that he would refuse to deal with the Palestinian Authority if it was led by Hamas or included Hamas as a partner, and that he would continue to take the high-handed unilateral actions planned by Sharon, including holding on to the large Israeli settlements in the West Bank and refusing to negotiate the status of Jerusalem.

Bush has boxed himself into an impossible situation. He promoted elections that have produced results opposite of the ones he wanted. For all his constant rhetoric about his determination to hunt down and kill terrorists, in Palestine he has in effect helped install into power a group he calls "terrorists." His confusion over whether this is democracy, which should be legitimate, or is an unacceptable outcome -- and his unwillingness to address the underlying issues behind the Israeli-Palestinian conflict -- suggest that a fatal paralysis will continue to afflict the region.