Emma Thompson, Colin Firth and a host of other British biggies are wasted in this busy, baffling "Mary Poppins" wannabe. 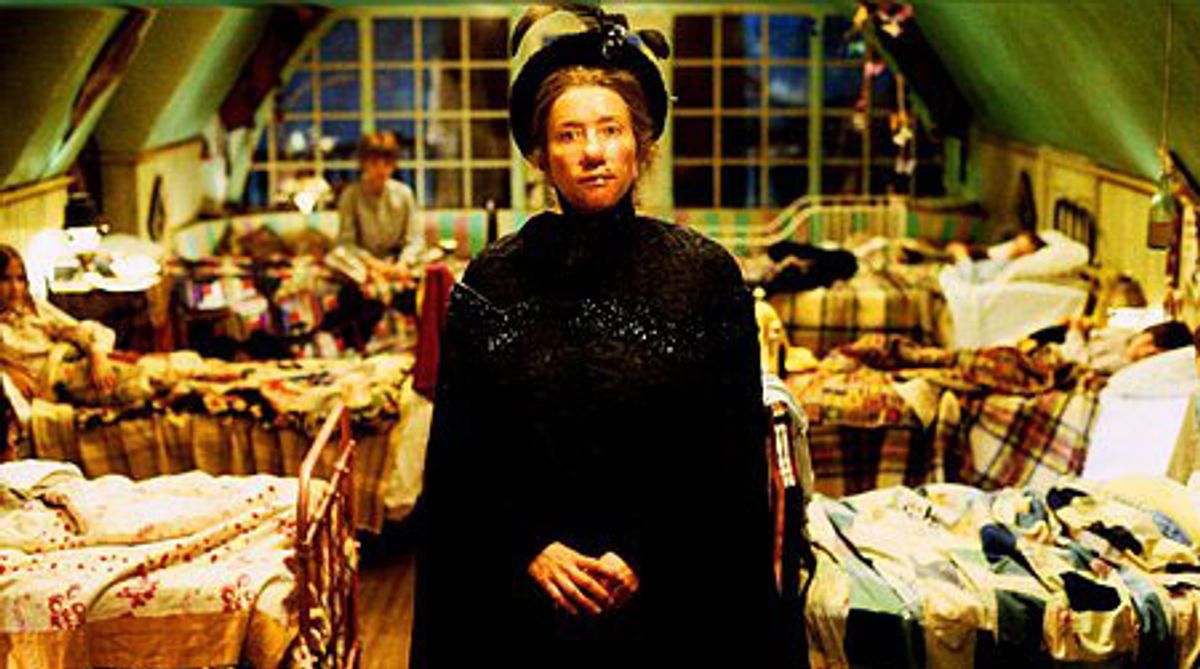 "Nanny McPhee" is stuffed with so many terrific U.K. actors that it would be nearly impossible to shoehorn in even one more: Emma Thompson, Colin Firth, Kelly Macdonald, Derek Jacobi, Angela Lansbury, Imelda Staunton -- and that's only a partial list.

But as much as it pains me to say so, none of them survives this train wreck of psychedelic Victoriana. "Nanny McPhee" was written by Thompson, who adapted "Sense and Sensibility" for Ang Lee, and who is also said to have done a polish on last year's "Pride & Prejudice." (The source material for "Nanny McPhee" is Christianna Brand's series of "Nurse Matilda" books.) Maybe the problem isn't exactly the writing. There are so many things in "Nanny McPhee" that ought to work -- it's graced with many of the little zigzags that kids love, like tea sandwiches with wriggly worms in them and assorted pigs, chickens and donkeys dressed up, by naughty children, in Sunday clothes. And the production design is lovely: Much of the movie takes place in a fairy-tale English country house, slightly run-down but in a comfortable way, its interiors a happy jumble of semibright greens and pinks.

The picture begins with a promising, wicked setup: We learn that there's the distinct possibility that the six oldest Brown children -- fiendishly intelligent brats who have perfected the art of driving away the nannies their widowed father keeps hiring to take care of them -- have actually eaten the youngest, the infant Aggie. We see them gathered around a big table in the nursery, waving half-gnawed turkey legs in the air, Henry VIII-style; one of these legs is still wearing a knitted pink bootie.

Of course, Aggie is safe and sound: The kids are just pretending they've cooked her up in order to send the latest nanny 'round the bend. (She's safely and comfortably nestled in a covered baking dish, on a mattress of cooked cabbage.) And so their exhausted father, Cedric Brown (Firth), an undertaker who's still grieving for his lost wife, the children's mother, is forced to find yet another caretaker for them. Just when he's exhausted every possibility -- the nanny agency has run fresh out of nannies, at least for the likes of the Browns -- a woman with two giant moles, a single eyebrow that stretches straight across her forehead like a scraggly caterpillar, and an overbite consisting of one giant Chiclet of a tooth, appears on his doorstep. This fearsome creature is Nanny McPhee (Thompson), and, Mary Poppins-like, she's shown up from who-knows-where to knock some sense into the little hellions.

But before long, the movie's aggressive weirdo quality starts to feel pinched and forced. The story becomes thick and sluggish with slow-cooking subplots: Cedric's rich, elderly auntie, played by an almost-unrecognizable Angela Lansbury, demands that he find a suitable wife within a month or she'll cut him off; he begins pursuing the only single woman immediately available, played by Celia Imrie, a horror in her hot-pink shepherdess outfits. And so on. The director, Kirk Jones ("Waking Ned Divine"), seems to be going for the ghoulish, wobbly roller-coaster madness that Tim Burton (at his best) pulls off so well, but his labors simply become exhausting to watch.

The actors, to a person, rush around valiantly, trying to stem disaster as they steer the picture toward its ultimate life lesson (and you know there has to be one). Firth stammers distractedly and charmingly, but has little else to do. Thompson, at first, is fascinating to watch -- when she creeps into the picture in her shadowy black Victorian get-up, you want to know exactly what she's up to, but you also feel a little apprehensive about finding out.

And yet even the title character ends up blending into the movie's background, lost in the whirlpool of subplots. Why do so many filmmakers think movies aimed at kids have to be manic and nutty to hold the little spuds' attention? Nuttiness can be fun, but strained eccentricity never is. There's nothing offhand or spontaneous-feeling about "Nanny McPhee"; it's a highly mechanical piece of work, and its potentially delightful details are wasted. The movie ultimately cooks its own goose, which is better, I suppose, than cooking a baby. But it still tastes like very bland chicken.