The daytime queen didn't just expose the lies in James Frey's "memoir." She publicly shamed him -- and it was a little creepy. 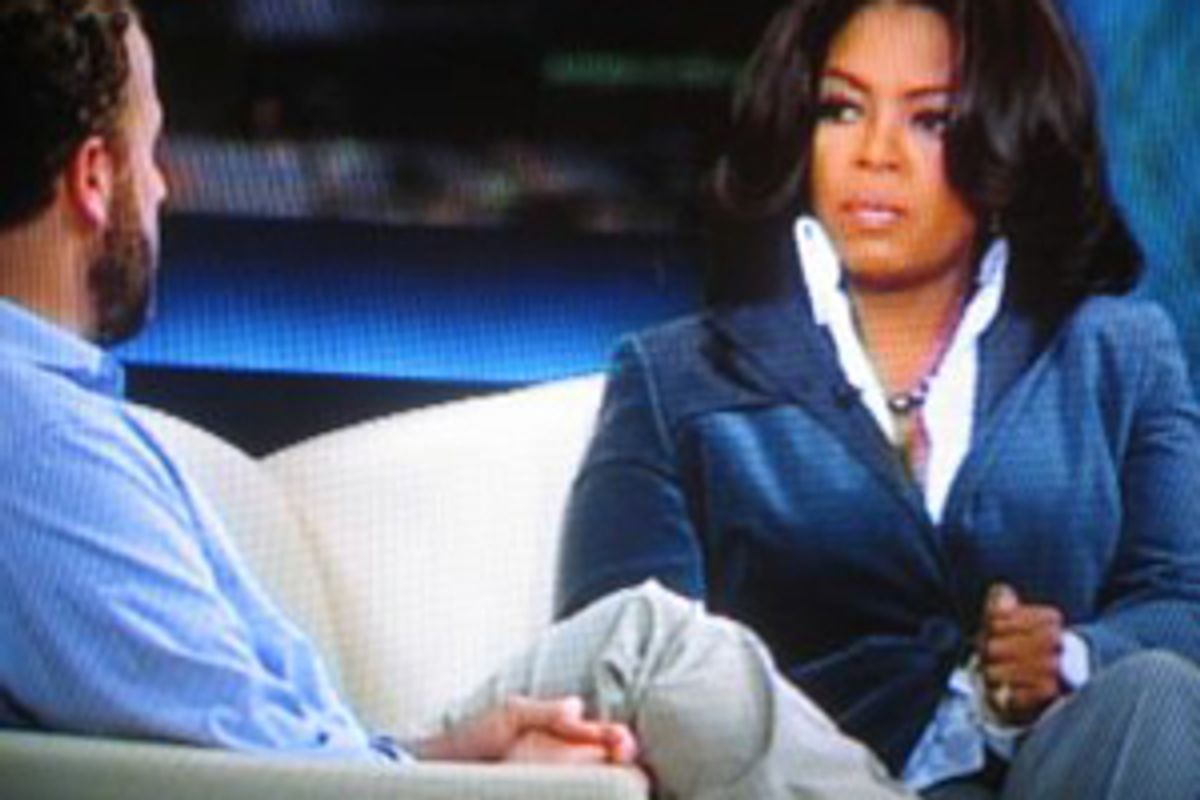 Today, Oprah Winfrey found herself in a position she has never been in before: having to apologize to her audience. "I regret that phone call," she said during a live taping of "The Oprah Winfrey Show" in Chicago. She was referring to her Jan. 11 phone-in to Larry King, during which the daytime queen expressed support for Oprah's Book Club author James Frey, who was under the initial round of fire for having fabricated parts of his mega-selling memoir "A Million Little Pieces." "I left the impression that the truth does not matter," she said. "To everyone who has challenged me about this book -- you are absolutely right."

Good for Oprah, right? Admitting being wrong, as Oprah has no doubt counseled guests on her show many times, isn't an easy thing to do, especially in front of millions of people. Yet, in the wake of this week's New York Times reports casting even wider doubts on the veracity of Frey's memoir, she didn't have much of a choice. Besides the Smoking Gun's initial investigation showing that Frey (to whom I am not related) lied about time he spent in jail and various run-ins with the law, some employees at the rehab center Frey attended have come forward to dispute his portrait of life there. No doubt her many, many followers (and admirers like myself) have been waiting for Oprah to finally pronounce James Frey a fraud, and to distance herself both from the flimsy book that she made into a phenomenon, and from the lying man she made into a hero.

Yet, even for those of us who have wanted to see Frey go down in flames for his lies, today's "Oprah" was unnerving. As Oprah pounded Frey over various moments in his memoir that have either been proved false or remain dubious (for instance, when and how Lilly, his rehab girlfriend, died, or whether Frey had two root canals without anesthesia), one couldn't help (dare I say it) feeling a little bit sorry for James Frey. As the audience clapped when Oprah spit out a real zinger ("It's a lie!"; "I think you presented a false person"), it was hard to avoid thinking that Frey was being put on display not to set the record straight, but for a public flogging. More than once Oprah emphasized that this experience has "embarrassed" her. Her revenge: shaming another person in front of a live studio audience. Who knew that Oprah was an "eye for an eye" kind of lady?

Through all of this, Oprah has blamed Frey's publisher for mislabeling the book, insisting that it should have been called a novel "based on a true story" instead of a memoir. (Rumors have been floated that Doubleday, or Frey's publisher Nan Talese herself, actually took what had been a novel and rechristened it a memoir, hoping for the kinds of sales only afforded to "true stories." Talese says the book was always presented to her as a memoir.) Today, Oprah brought Talese on to prod her about this. She asked whether there weren't "red flags" in "A Million Little Pieces" that should have led Doubleday to investigate whether Frey's story was true. Citing the gruesome root canal scene, Oprah asked whether that shouldn't have been a signal that Frey was making things up.

To be sure, Doubleday, at the very least, should have required Frey to include an editor's note making clear that he had altered events and changed many characteristics of the women and men who populate his memoir. (Talese announced today that all future editions of Frey's book will carry such a note.) But here's a question: If Oprah can see now that outrageous events like his novocaine-free dental work were "red flags" that the publisher should have heeded, why didn't she pause there, too, before choosing "A Million Little Pieces" for her club? Oprah did her best today to play wounded, claiming that she feels "duped," and "conned" by James Frey. "The book is so fantastical," Oprah told Talese. Then why did Oprah herself take it at face value and sell it to her acolytes?

One thing is certain. As the New York Times' Frank Rich put it on "Oprah" today, this is "amazing television!" Rich appeared along with Richard Cohen of the Washington Post and Roy Peter Clark from the Poynter Institute (there were also, it must be noted, key taped segments featuring the blatherings of Maureen Dowd, Joel Stein and Stanley Crouch) to further the debate over the punishment of James Frey -- though Rich took it one leap further, decrying lying in all aspects of culture, including Enron, the sham of Jessica Simpson's marriage to Nick Lachey and the war in Iraq (at which point Oprah's eyes glazed over). This took what was decent, if depressing, theater to the level of farce. At one point Clark suggested that publishers should institute a ratings system for memoirs, to alert readers to how truthful a book is (an A+, or something like it, going to "State of War" author James Risen; a D to "A Child Called It" author Dave Pelzer); sadly, Oprah and the audience seemed to respond positively to this idea.

Here's what I say to Oprah: We don't need a ratings system for memoirs. We need to find meaning in books apart from their authors' oversize personalities, or bizarre travails. Oprah is right that the truth does matter. But if what she really wants to promote through her book club are incredible stories -- and Frey's, had it been true, was perhaps most incredible of all -- she should look back to where she used to find them: fiction.