More than a "few rotten apples"

A U.S. soldier who tortured an Iraqi general to death got his wrist slapped. Yet his appalling sentence made a certain sense. 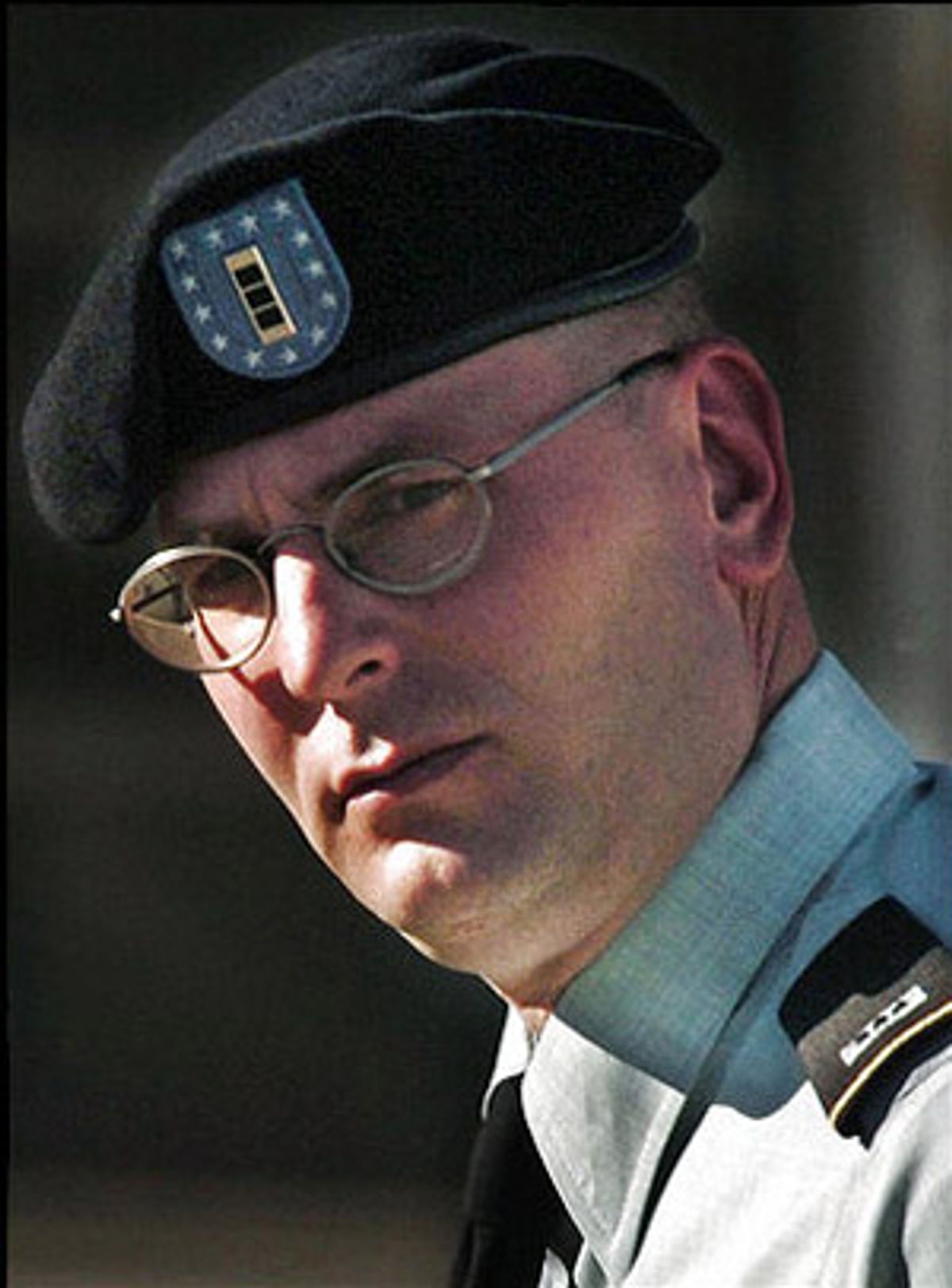 Earlier this week at Fort Carson in Colorado, the military jury that heard charges of murder against Chief Warrant Officer Lewis E. Welshofer delivered a bold and stunning version of justice -- a sentence amounting to a slap on the wrist. Welshofer was on trial for the death of Iraqi Maj. Gen. Abed Hamed Mowhoush: After Mowhoush's capture in western Iraq in November 2003, Welshofer, an experienced Army interrogator, bound him and stuffed him in a sleeping bag, and then sat on Mowhoush's chest in an effort to pry from him information about the Iraqi insurgency. The Iraqi general suffocated.

A jury trial always has three defendants: the accused, the prosecutor and the law. In this one, part of which we observed from the courtroom last week, the three captains, two majors and one lieutenant colonel on the jury spared the defendant, indicted the prosecutor, and found the law irrelevant.

A primary aspect of Welshofer's defense was the claim that Welshofer had been operating under confusing guidelines, and that his superiors had been aware of the "claustrophobic" interrogation technique he used. With a verdict of negligent homicide and dereliction of duty against Welshofer, the jury spared him from a more serious murder conviction and life in prison. Even the lesser verdict could have carried a three-year prison sentence. But the jury imposed a sentence that called only for a letter of reprimand, two months' confinement to post, and forfeiture of $6,000 in pay. In essence, the jury took revenge upon the prosecution for wasting a week of the jurors' time by bringing a charge that the jury, evidently, felt was not warranted under the circumstances of combat.

Stung by the photographs of torture from Abu Ghraib, the Army touts the vigor with which it is investigating and punishing soldiers who are found to have abused prisoners. Pentagon spokespeople regularly refer to "more than 500 investigations and more than 300 instances of disciplinary action" as a result. With this latest sentence in a homicide case, it's time to either drop the pretense and spend the trial money on more body armor, or get real about accountability for enforcing the laws of war.

Juries are a check and balance in our system of justice. Military law does not allow the Welshofer jury to publicly explain its conclusions, but its sentencing decision was so disproportional to the facts in evidence and the spectrum of punishments for other instances of criminal conduct that it begs for careful analysis. It would be a mistake to conclude that the jury's light slap on Welshofer's wrist was a matter of a Fort Carson military jury looking out for a Fort Carson military officer. Prisoner torture is an issue about which the jury officers were undoubtedly well-read at this point, and of strong opinions. Those opinions remain unknown, but the Army ought to be digging for the answers.

On the most elemental level, justice requires proportionality and comparability of punishment for criminal conduct of similar gravity. Could the jury have been unaware that three Abu Ghraib defendants -- who, unlike Welshofer, didn't kill anyone -- are serving prison terms of three, eight and 10 years? Is there a different standard of punishment for junior enlisted reservists versus senior regular Army warrant officers? While she acted inexcusably, Pvt. Lynndie England had received little to no training for her guard duties at Abu Ghraib; Welshofer, 43, was thoroughly trained as an Army interrogator and in what the Geneva Conventions require and allow. England will spend three years in the Disciplinary Barracks at Fort Leavenworth; Welshofer, vastly senior in status, responsibility and experience, wasn't even confined to his quarters. Until the Army can explain how Welshofer's sentence meets a minimal standard of equal justice under the law, the disciplinary score card it trots out is meaningless.

The jury's decision also underscores the pattern in the Army and at the Pentagon of enforcing accountability for prisoner torture at the bottom of the ranks, without any serious effort to enforce it at the top. If Welshofer was singled out by prosecutors for "trying to save soldiers' lives" under ambiguous or contradictory command guidance -- which his defense attorneys hammered at over and over during the court martial -- why hasn't the Army focused its prosecutorial lasers on those generals who fumbled the command guidance, or upon those colonels who were responsible for seeing that only approved interrogation techniques were put to use?

One striking fact to come out of the Welshofer trial was that he was operating on his own, with little direct supervision by his company commander, or the commanders up the chain of command. Were the jurors aware that of all the generals whose fingerprints were on Abu Ghraib, only one was ever disciplined by receiving a reduction in rank to colonel? Was it lost upon the jurors that the regimental commander, for whom Welshofer was his prized interrogation "subject-matter expert," was now serving in a plum Pentagon post while Welshofer was facing life in prison? This juxtaposition surely must have seemed discordant to the jury, especially knowing that the Army Field Manual -- also known as the Army's "operations bible" -- states: The commander is responsible for all his unit does or fails to do.

It may also have seemed discordant that an Army warrant officer alone was in the dock for alleged brutality and torture when "other U.S. civilians" involved in Mowhoush's capture -- presumably meaning CIA personnel and the Iraqi paramilitaries in their employ -- severely beat an enemy army flag officer, who was clearly entitled to Geneva Conventions protections, within an inch of his life.

The Welshofer case puts a fine point on a question that has plagued us since Abu Ghraib: Is the Army institutionally capable of dealing with the debacle of torture? The Army and the nation cannot afford to have soldiers draw the obvious lesson from the case's nonsensical outcome: that in combat, the ends justify the means, and the Geneva Conventions and the McCain anti-torture amendment are subject to change depending on the circumstances or executive whim. Since the Army seems to have no inclination to enforce the principles of command discipline and accountability among the senior ranks, the corrosive effects of U.S. torture in Iraq and elsewhere will continue to haunt any efforts to regain lost stature and credibility in the world.

"I deeply apologize if my actions tarnished the soldiers serving in Iraq," Welshofer said to the jury at his trial's close. His actions -- and even more the military's woefully inadequate response to them -- have tarnished far more than that.