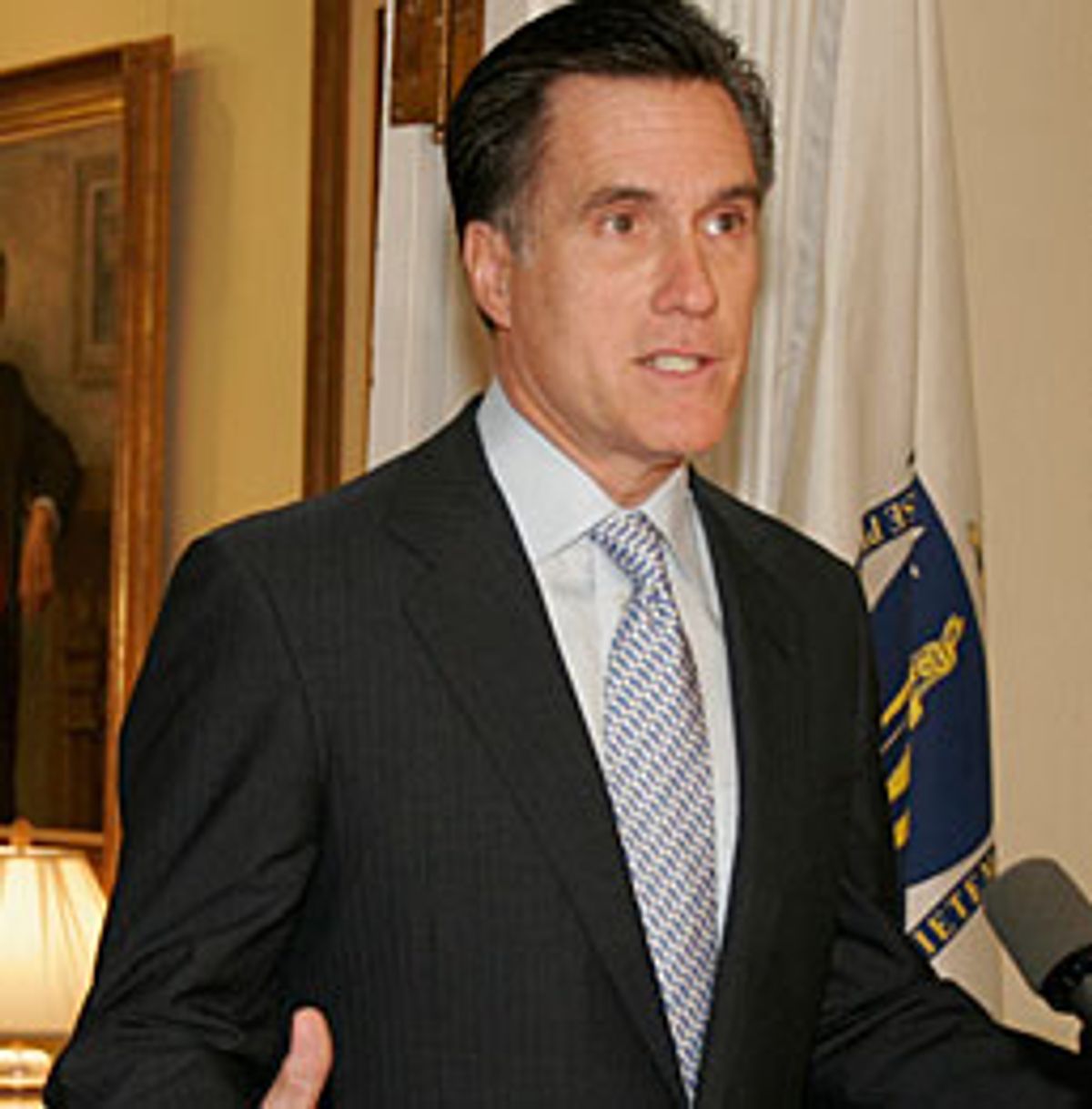 A handful of Massachusetts legislators are maneuvering to get their state into the most ambitious U.S. effort yet to fight global warming, the Regional Greenhouse Gas Initiative, launched in late December. If they succeed, it'll be a smarting wallop for Republican Gov. Mitt Romney, who is widely expected to run for a spot on the GOP's 2008 presidential ticket.

The pact, commonly called RGGI ("Reggie"), commits seven Northeastern states -- Connecticut, Delaware, Maine, New Hampshire, New Jersey, New York and Vermont -- to reducing their carbon dioxide emissions 10 percent by 2019. Massachusetts was supposed to be among them, but in mid-December Romney abruptly pulled his state out -- despite the fact that several staffers in his administration had spent two and a half years and more than half a million dollars negotiating and shaping the deal. Rhode Island Gov. Donald Carcieri, also a Republican and an ally of Romney's, quickly followed suit.

Massachusetts state Sen. Pam Resor and Rep. Frank Smizik, both Democrats who head up the Legislature's Joint Committee on the Environment, Natural Resources, and Agriculture, plan to introduce legislation that would attempt to circumvent Romney's move. "We are proposing language that would call on the Department of Environmental Protection to adopt standards and a regulatory process that would effectively put Massachusetts in compliance with RGGI," Resor said. "We can't legislatively order the governor to sign it, but we are hopeful that this language would pave the way for him or the next administration to become a signatory."

Given the leftward tilt of the Massachusetts Legislature -- 169 of its 200 members in 2005 were Democrats -- a RGGI bill could be expected to have a strong chance of passing. Even if Romney were to veto it, the Legislature might be able to drum up a two-thirds majority to override.

Failing that, environmental advocates in the state hope Romney's successor will embrace the pact. The governor has announced that he will not seek reelection this November. Both of the Democratic candidates in the running for his position support the pact. Lt. Gov. Kerry Healey, the leading Republican contender, has in the past voiced support for RGGI, but more recently backed Romney's move to withdraw.

State Rep. Jim Marzilli, a Democrat and longtime supporter of RGGI, is confident that Massachusetts will renew its commitment to the climate agreement through a combination of legislative action and new gubernatorial leadership. "Many in the Massachusetts Legislature see Romney's abandonment of RGGI as a total embarrassment, not only to our state but to the country," he said. "I was in Montreal at the Kyoto [Protocol] conference just when Romney was indicating he would pull the plug. It came as a total shock to the international leaders attending. The European Union sees RGGI as the last best hope for a binding commitment to reducing greenhouse gases in the U.S."

Romney had until last month been an advocate and architect of RGGI, which includes a market-based trading system that will let big fossil-fuel power plants buy and sell the right to emit carbon dioxide. As recently as November, he was publicly talking up the agreement: "I'm convinced it is good business," he told a clean-energy conference in Boston. "We can effectively create incentives to help stimulate a sector of the economy and at the same time not kill jobs."

But in December Romney started demanding that the pact cap the amount of money power plants would have to pay if they exceeded emissions limits, arguing that without such a limit, energy bills for both businesses and households could rise by more than 10 percent and weigh down the state's economy. When he and leaders from the other states couldn't come to an agreement on the cap issue, Romney jumped ship.

"New England has the highest energy rates in the country, and [the pact] would cost us more," Romney told the Boston Globe by way of explaining his decision.

His move perplexed and angered people close to the project, including some of Romney's own staffers.

"Massachusetts and New York were the leaders on shaping this pact," said Marzilli. "Romney instructed his most senior cabinet member, Douglas Foy, to play a principal role in the long-running RGGI negotiation process, and then he turned around and repudiated it."

Dale Bryk, a senior attorney at the Natural Resources Defense Council, said that Foy and Sonia Hamel of Massachusetts' Office for Commonwealth Development, which Romney created to promote sustainable development, analyzed the agreement's potential impacts and determined that it would have a negligible effect on energy prices. "Their economic models for RGGI even showed possible economic benefits for end users," said Bryk. "RGGI is designed to funnel strong investments into energy-efficiency programs that could save the average household between $30 and $50 a year."

Neither Foy nor Hamel would agree to be interviewed for this story. Romney's spokesperson also did not return requests for comment.

Observers say Romney's about-face has everything to do with his yearning for the presidency. In fact, his rejection of RGGI came on the very same day that he announced he wouldn't run for governor again -- a move widely seen as clearing the way for him to seek the Republican presidential nomination.

Some suggest he wanted to distinguish himself from other Republican hopefuls -- namely New York Gov. George Pataki, who spearheaded the RGGI effort, and Sens. John McCain, R-Ariz., and Chuck Hagel, R-Neb., all of whom have tried to position themselves as leaders in the fight against climate change.

Chicago Sun-Times columnist Robert Novak wrote that Romney's rejection of the deal may give him "a leg up in coal-producing states" and help him attract "interest from automakers and other industries that oppose mandatory carbon dioxide limits."

Bryk put it more bluntly: "There seems to be no logical explanation for Romney's rejection of RGGI other than that he wanted to capture the support and campaign dollars of the coal and utility industries."

She and other critics say he appears to have buckled under aggressive lobbying pressure from out-of-state energy and extractive companies, including Dominion Energy, a coal company headquartered in West Virginia, and Entergy, based in Louisiana. This even though RGGI has had plenty of support from Massachusetts-based coalitions and companies such as the utility National Grid, KeySpan Energy, Staples, Genzyme and the Energy Consortium Inc.

"Romney blatantly prioritized out-of-state industry power players and Midwestern coal interests over the concerns of his constituency," said Seth Kaplan, director of the clean-energy program for the Conservation Law Foundation, a New England environmental organization. "He then went on to spin a bogus public message that tackling climate change is bad for the economy."

The Massachusetts governor, who earned green kudos early in his term, now seems to believe he'll benefit from being on the same side of the climate issue as President Bush.

Said Kaplan, "The bigger picture here is that RGGI is laying the groundwork for a national policy on climate change, one that is quickly gaining currency at both a state and a federal level."

Resor and her cohorts in the Massachusetts Legislature want to be on the leading edge of that trend, as do leaders in a growing number of other states. California, New Mexico, Oregon, Pennsylvania and Washington have expressed interest in studying and possibly joining the RGGI pact. And this past week, a bill was introduced in the Maryland Legislature that would require the state's seven largest coal-fired power plants to reduce their carbon dioxide emissions 10 percent by 2018, an apparent reaction to Republican Gov. Robert Ehrlich's refusal to join RGGI.

"It's not a question of whether the United States adopts a climate strategy, but when," said Kaplan. "It's an increasingly heated and visible issue, and I predict that come election year [2008] Romney will discover that he's on the wrong side of it."