James H. Payne broke the law by ruling on corporations in which he held financial interests. Now Bush's nominee to the nation's second-highest court has the Senate and a top judge on his case. 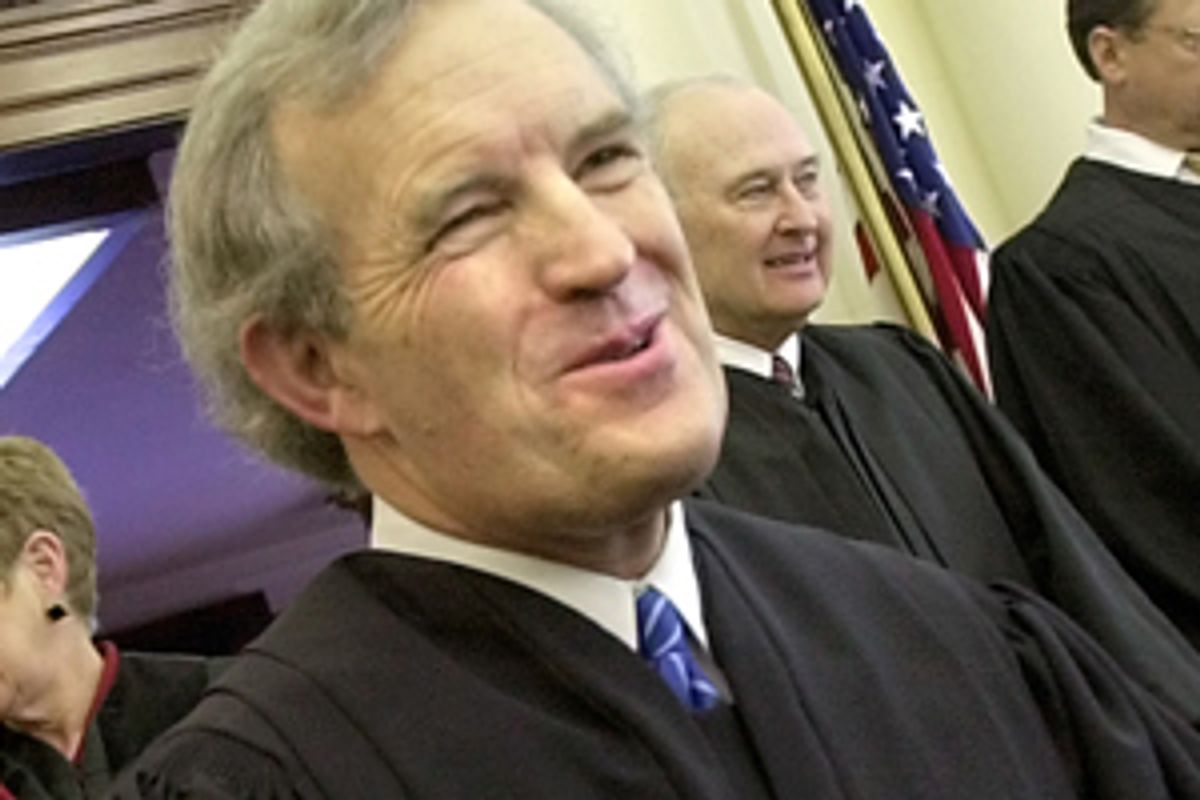 A federal judge nominated by President Bush to one of the nation's highest courts disqualified himself from two cases against a corporation in which he has held personal investments, after a report revealed that his career on the bench has been riddled with conflicts of interest.

On Jan. 23, following the Salon story "Bush Nominee Broke Law," Judge James H. Payne recused himself from two product-liability suits against drug titan Pfizer, which had been assigned to him since November, according to court documents. Payne has reported stock holdings of up to $15,000 in Pfizer since 1999. Federal law and the official Code of Conduct for U.S. judges explicitly prohibit judges from sitting on cases involving companies in which they or members of their immediate family own stock.

Payne was nominated by Bush last fall to the 10th U.S. Circuit Court of Appeals, based in Denver, and is awaiting a confirmation hearing. The chief judge of the 10th Circuit Court and a member of the Senate Judiciary Committee staff told Salon they plan to look further into Payne's reported violations of federal law, while senators from the judge's home state have reaffirmed their support of the nominee.

Payne, who is currently chief judge of the federal district court in Muskogee, Okla. (he was elevated by Bush from magistrate judge in 2001), recused himself without the prompting of lawyers, according to lawyer Laurie Koller, who helped bring the cases against Pfizer.

Payne declined to comment on either the initial Salon story or his subsequent recusals. The judge decided that "out of respect for the Senate confirmation process it's not appropriate for him to make any comments," said his secretary Linda Ambrose, who referred questions to the White House and Department of Justice.

Bush administration officials did not return repeated calls for comment on the Salon story, which revealed that since 1999 Payne has issued more than 100 orders in at least 18 cases that involved corporations in which he reported stock holdings.

"I, of course, would first want to talk to Judge Payne and I haven't been able to do that yet," Chief Judge Deanell Reece Tacha, the Reagan-appointed judge who heads the 10th Circuit Court, told Salon. "I want to get the facts first."

The chief judge of any circuit court can call a special committee of judges to investigate misconduct and potentially censure a judge.

Lawmakers may raise the conflict-of-interest problem at Payne's confirmation hearing before the Senate Judiciary Committee, which has not yet been scheduled. "It's too soon to make any determination on the nomination," said Tracy Schmaler, a spokesperson for Sen. Patrick Leahy, the ranking committee Democrat. "Staff is looking into it, and it will likely come up at the hearing."

The office of Republican Sen. James Inhofe of Oklahoma provided this statement: "Senator Inhofe continues to strongly support Judge Payne's nomination and knows of no instances where Judge Payne has been involved in any conflict of interest. The Senator has full faith in the exhaustive background checks performed on these nominees and will comment further when the facts surrounding this internet story are known."

Oklahoma's other senator, Republican Tom Coburn, who sits on the Judiciary Committee, did not return Salon's calls. However, a story in the Oklahoman newspaper last week reported that "spokesman John Hart said Coburn is not inclined to consider the Salon.com report credible."

To date, no one has disputed any details of the Salon report.

Professor Monroe Freedman, an expert on ethics at the Hofstra University School of Law, said controversy over conflicts of interest could very well torpedo a nomination like Payne's. He pointed to the case of Judge Clement Haynsworth, a Nixon nominee to the Supreme Court who was rejected by the Senate largely because of his financial conflicts. "If you've got a case of multiple offenses, or one or more blatant ones, I would hope that [the Judiciary Committee] would pay attention to it and I think they probably will," he said. Based on Payne's record, "a fair prediction can be made that this is a judge who cannot be counted on to abide by his ethical obligations."

"We're not only talking about public servants -- we're talking about members of the judiciary," Freedman added. "I'm no less concerned about the message it sends to other judges."

Meanwhile, in Tulsa, one of the cities where Payne presides, some lawyers said their trust in Payne's integrity has not been shaken.

"Nobody in the legal community in Tulsa or Northern Oklahoma is probably going to care," said lawyer David Blades. "Tulsa's a small town, by national standards. We all know each other, we all know the judges and go to the same bar meetings, and it's just not going to make a difference." Blades added, "He may have made some administrative error ... but I haven't ever seen it affect his job."

Tulsa lawyer Tracy Cinocca said she would be surprised if Payne hadn't considered his recusal decisions carefully. "I think that a lot of the legal community would be supportive of Judge Payne, but at the same time I think the article is one that brings questions to light that would be of concern to the public," she said. "Because everybody wants to make sure that access to the courts is safeguarded. They want to make sure that the judges there are beyond any appearance of impropriety."

Safeguarding that public confidence in the system could be much more difficult once a judge with a tarnished track record has secured a position on the federal bench -- or in Payne's case, is elevated to a higher one -- according to Hofstra University's Freedman. He notes that impeachment, a rarity, is the only way for Congress to discipline a federal judge, making it all the more important in a case like Payne's to consider the issue when deciding whether to confirm him. "It would be a disgrace if it does not preclude his confirmation," said Freedman. "He should not be confirmed."