Out of jail, into the Army

Facing an enlistment crisis, the Army is granting "waivers" to an increasingly high percentage of recruits with criminal records -- and trying to hide it. 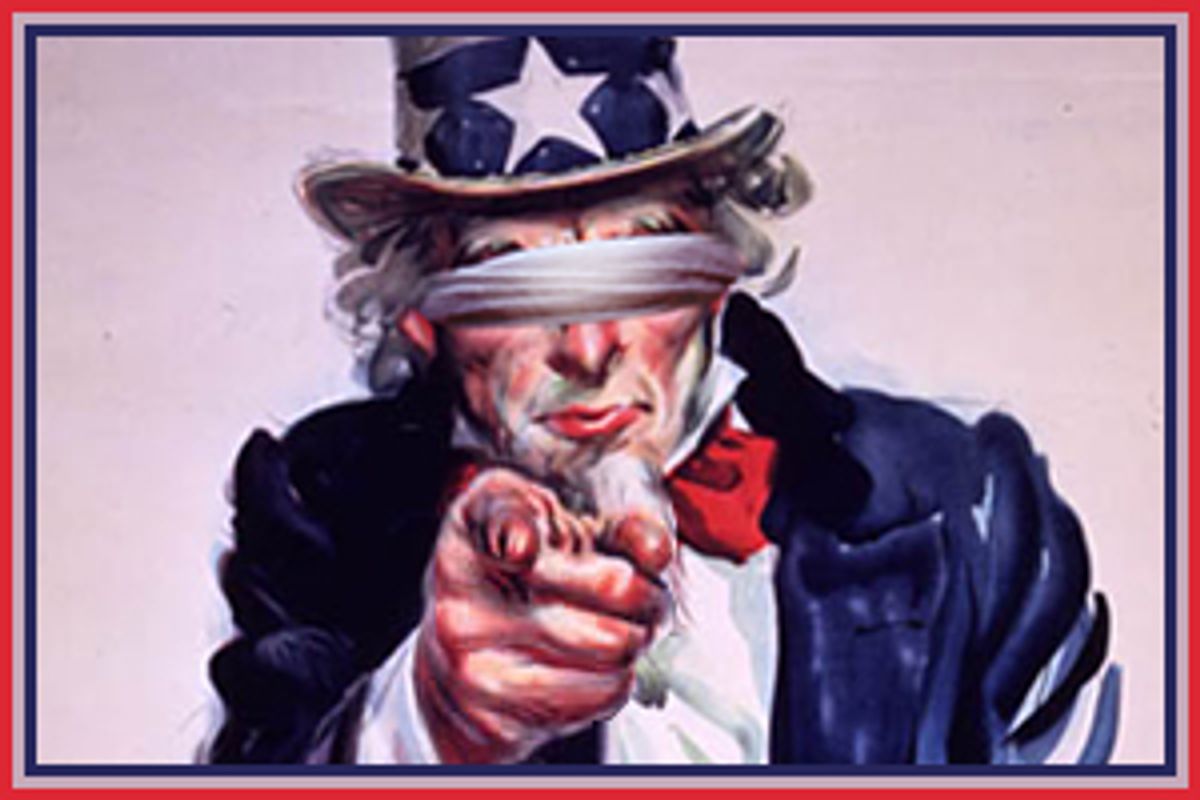 We're transforming our military. The things I look for are the following: morale, retention, and recruitment. And retention is high, recruitment is meeting goals, and people are feeling strong about the mission.

It was about 10 p.m. on Sept. 1, 2002, when a drug deal was arranged in the parking lot of a mini-mall in Newark, Del. The car with the drugs, driven by a man who would become a recruit for the Delaware Air National Guard, pulled up next to a parked car that was waiting for the exchange. Everything was going smoothly until the cops arrived.

"I parked and walked over to his car and got in and we were talking," the future Air Guardsman later wrote. "He asked if I had any marijuana and I said yes, that I bought some in Wilmington, Del., earlier that day. He said he wanted some." The drug dealer went on to recount in a Jan. 11, 2005, statement written to win admission into the military, "I walked back to my car [and] as soon as I got in my car an officer put his flashlight in the window and arrested me."

Under Air National Guard rules, the dealer had committed a "major offense" that would bar him from military service. Air National Guard recruits, like other members of the military, cannot have drug convictions on their record. But on Feb. 2, 2005, the applicant who had been arrested in the mini-mall was admitted into the Delaware Air National Guard. How? Through the use of a little-known, but increasingly important, escape clause known as a waiver. Waivers, which are generally approved at the Pentagon, allow recruiters to sign up men and women who otherwise would be ineligible for service because of legal convictions, medical problems or other reasons preventing them from meeting minimum standards.

The story of that unnamed Air National Guard recruit (whose name is blacked out in his statement) is based on documents obtained by Salon under the Freedom of Information Act. It illustrates one of the tactics that the military is using in its uphill battle to meet recruiting targets during the Iraq war. The personnel problems are acute. The Air National Guard, for example, missed its recruiting target by 14 percent last year. And the regular Army missed its goal by 8 percent, its largest recruiting shortfall since 1979.

This is where waivers come in. According to statistics provided to Salon by the office of the assistant secretary of defense for public affairs, the Army said that 17 percent (21,880 new soldiers) of its 2005 recruits were admitted under waivers. Put another way, more soldiers than are in an entire infantry division entered the Army in 2005 without meeting normal standards. This use of waivers represents a 42 percent increase since the pre-Iraq year of 2000. (All annual figures used in this article are based on the government's fiscal year, which runs from Oct. 1 to Sept. 30. So fiscal year 2006 began Oct. 1, 2005.)

In fact, even the already high rate of 17 percent underestimates the use of waivers, as the Pentagon combined the Army's figures with the lower ones for reserve forces to dilute the apparent percentage. Equally significant is the Army's currently liberal use of "moral waivers," which are issued to recruits who have committed what are loosely defined as criminal offenses. Officially, the Pentagon states that most waivers issued on moral grounds are for minor infractions like traffic tickets. Yet documents obtained by Salon show that many of the offenses are more serious and include drunken driving and domestic abuse.

Last year, 37 percent of the Army's waivers (about 8,000 soldiers) were based on moral grounds. Like waivers as a whole, these waivers are proliferating -- they're 32 percent higher than in the prewar year of 2000. As a result, the odds are going up that the soldiers fighting and taking the casualties in Iraq entered the Army with a criminal record.

"The more of those people you take, the more problems you are going to have and the less effective they are going to be," said Lawrence J. Korb, an assistant secretary of defense under Reagan and a senior fellow at the progressive Center for American Progress. "This is another way you are lowering your standards to meet your goals." Retired Lt. Gen. William E. Odom, who was the Army's chief intelligence officer from 1981 to 1985, also called the increase in waivers "disturbing."

He expressed concern that the lower standards would place a burden on military commanders who have to deal with "more lawbreakers and soldiers with anti-social behavior in their units."

Even without the waivers, the Army has lowered its standards for enlistees. The Army has eased restrictions on recruiting high school dropouts. It also raised the maximum recruitment age from 35 to 39. Moreover, last fall the Army announced that it would be doubling the number of soldiers that it admits who score near the bottom on a military aptitude test.

In response to inquiries about the number of waivers being used, the Pentagon's assistant secretary for public affairs issued a three-page statement to Salon on Monday, headlined, "Military Recruiting -- High Standards With Limited Waivers." Regarding the use of moral waivers, it argues that "in most cases, the [criminal] charges were from a time when the applicant was young and immature." The Pentagon document contends that many waivers were "simply for an unusual number of traffic violations." It also cites as typical in waiver cases such minor offenses as "curfew violations, littering, disorderly conduct, etc."

Other Pentagon officials, who requested anonymity, cautioned against regarding this statement from the public affairs desk as the definitive word on the waiver question. These personnel experts stressed that the Army has a major problem with its use of exemptions from normal enlistment standards. These sources went on to say that the Army's statistical data appears to have been scrubbed to make its use of waivers look more infrequent than it actually is.

One Pentagon official, whom Salon asked to inspect the Army's official waiver figure, said the Army's claim that it has issued waivers to 17 percent of recruits "is not a correct number." In fact, the percentage should be higher. The Army has made the number appear lower by combining data from Army Reserve forces, including the Army National Guard -- even though the Guard has its own separate recruiting program and (based on information provided to Salon under the FOIA) used waivers in only 6 percent of all cases in 2005.

When pressed, the office of public affairs admitted that it had lumped together data from several military services to derive the official Army waiver number. Lt. Col. Ellen G. Krenke, a Pentagon spokeswoman in the office of public affairs, confirmed that the data provided to Salon had combined the waivers records of the regular Army, the Army Reserve and the Army National Guard into a single entry. She confirmed by e-mail: "Yes, these numbers include the active duty and reserve components."

Krenke referred questions about the Army's actual waiver rate to its Recruiting Command at Fort Knox, Ky. Julia Bobick, an Army spokeswoman there, said her unit had received the document that the Pentagon had provided Salon and was "re-looking" at its own data in light of the follow-up questions. Until that reexamination is complete, Bobick said, the Army would have no additional comment. "The numbers that we have are not releasable," she said. "We are re-looking at these numbers in light of that query."

In short, the military's explanation seems a variant of Catch-22. Officials now admit that the Army waiver data originally given to Salon was contaminated with extraneous numbers, but the Army cannot comment on what its actual waiver percentage might be, since the Pentagon figures are so muddled. When told of these numbers games, Korb said, "I'm sure that somebody on Capitol Hill is going to demand the answers."

It is no secret to Congress that the Army, which is fighting the brunt of the war in Iraq, is facing a severe personnel crisis. A Pentagon-commissioned report by the Center for Strategic and Budgetary Assessments leaked last week warned that prolonged deployments and recruiting problems were "breaking" the Army. A chapter of that report, titled "A Recruiting and Retention Crisis?" goes so far as to say that the grind of war on the Army -- rather than any political imperatives from Washington -- will accentuate the pace of military withdrawal from Iraq.

Odom offered a similar interpretation: "We will get out this year, not because we want to; we don't have any more troops to send. What we are seeing is the declining capability of the Army caused by the administration's manning and deployment policies."

A contrary, though far from surprising, view was offered by Secretary of Defense Donald Rumsfeld. Asked about the report warning of a broken Army at a press conference last week, Rumsfeld said, "I just can't imagine someone looking at the United States armed forces today and suggesting that they are close to breaking."

This fits with the Pentagon's official response that most Army waivers on moral grounds are for minor infractions like traffic tickets and littering. While there is no way to independently verify those claims regarding the Army, records from another branch of service suggest how recruiting waivers can easily be misused.

Under the Freedom of Information Act, Salon obtained copies of a one-inch stack of waivers granted by the Air National Guard from January to July 2005. Many of the offenses excused are significantly more serious than driving with a defective tail light or failing to return overdue library books.

Lt. Gen. Daniel James III, the Air National Guard director, told the House Committee on Armed Services last July 19, "The Air National Guard's success is rooted in the quality of our recruits and our ability to retain them. Our people are unequivocally our most valued resource."

Yet according to the waivers, just four days earlier the Air Guard's national headquarters had approved the enlistment of a California recruit who had been charged in October 2003 with "assault by means likely to produce great bodily injury." True, the recruit was a 17-year-old juvenile when he committed the crime for which he was later convicted, but that date was less than two years before he was admitted to the Air Guard.

Other examples from the Air Guard files suggest a wider problem:

Taken together, the troubling statistics from the Army and anecdotal information derived from the files of the Air National Guard raise a warning flag about the extent to which the military is lowering its standards to fight the war in Iraq. The president may be correct in his recent press conference boast that "we're transforming the military." But the abuse of recruiting waivers prompts the question: In what direction is this military transformation headed?