This delightfully good-natured interracial romance is the perfect date movie. 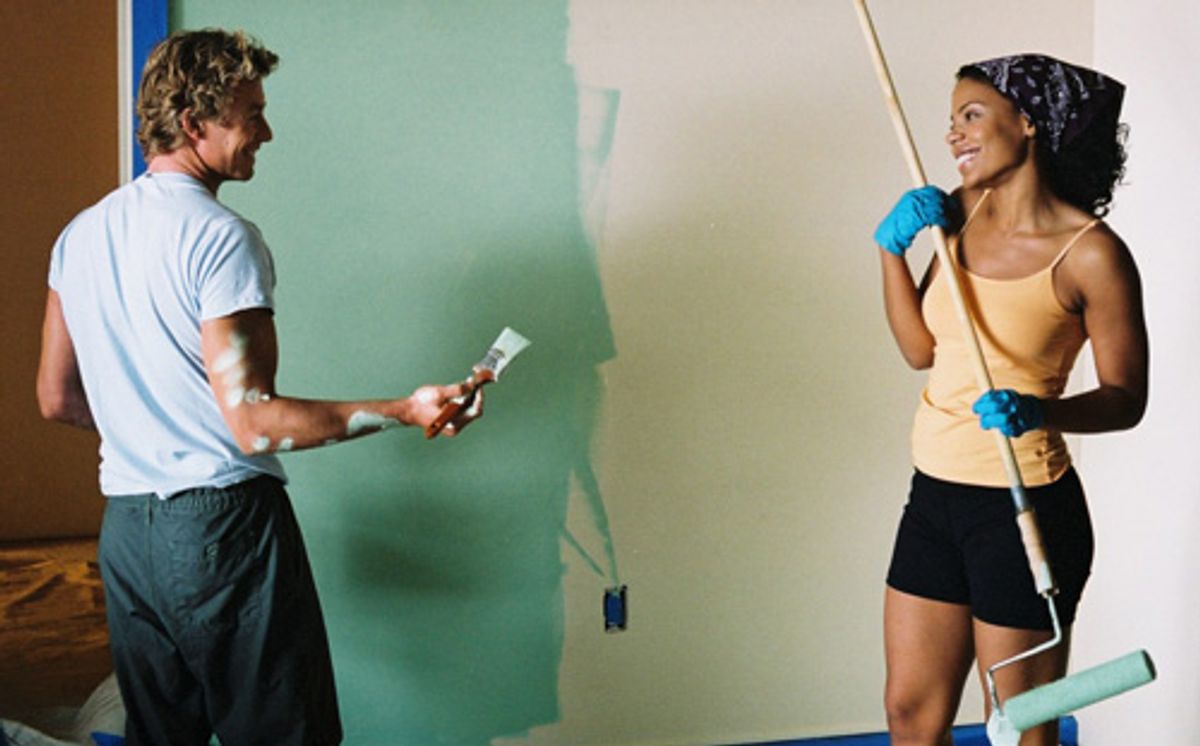 January and February have become the months when moviegoers -- and some critics, too -- temporarily shut off their feelers, figuring that in terms of mainstream movies, at least, nothing particularly interesting is going to surface until sometime around when the crocuses show. But it's dangerous to allow moviegoing habits to be driven by the market: Even though plenty of bad movies do come limping along in the early months of the year, other January-February orphans are simply smaller movies that don't stand a chance against big-money blockbusters, or movies that a studio simply has no idea how to sell. You never know what's going to come out of the winter dead zone, and Sanaa Hamri's charming and surprisingly sharp romantic comedy "Something New" is a case in point.

"Something New" is an interracial romance, a category that's no longer considered particularly daring, partly thanks to the dull-witted, timid way most pictures have handled the idea of love that crosses color lines: When we start getting lousy mainstream comedies on the subject, like the Bernie Mac-Ashton Kutcher disaster "Guess Who," we're all tempted to start thinking (or at least hoping) it's been played out.

But the romantic-comedy formula depends on the idea of young lovers' facing deceptively simple-seeming obstacles. And if even something as basic as different family backgrounds can still cause problems between young lovers, then why not race? Even so, what's most interesting about "Something New" is that although it spends a fair amount of time exploring certain relationship problems related to race, the biggest dangers this particular young couple face are racially neutral: The torpedoes that threaten to sink them are bad communication and the heroine's inability to let go of the rigid recipe for happiness that she's been clinging to for years. In the grand scheme, it doesn't matter much that this heroine, Kenya (Sanaa Lathan), is African-American and her love interest, Brian (Simon Baker), is white. What does matter is that Kenya -- as well as some of her family and friends -- can't shake the idea that race always needs to be an issue.

And in some ways, "Something New" is just as much about class issues as it is about race. Kenya is a highly educated professional with a great job at a large corporate accounting firm, and she comes from a very well-heeled family: Her father (Earl Billings) is the head of neurosurgery at Cedars-Sinai Hospital; her mother (Alfre Woodard) enjoys the stature that her husband's job brings her, and she also likes tasteful clothes and expensive jewelry. Kenya's brother (Donald Faison) is just getting his start as a lawyer, and although for now he's just having fun in the romance department, dating a succession of comically good-natured bimbos, his dates are always black. He considers it a given that Kenya would never cross the color line, either.

And at first, Kenya has no intention of doing so. In an early scene, she and her three best girlfriends (played with chatty liveliness by Golden Brooks, Wendy Raquel Robinson and Taraji P. Henson), all single and all in their 30s, gather for drinks and lament how tough it is to find the IBM ("ideal black man"). They glance disparagingly at a nearby table, where a black guy sits with his white date, citing "that" sort of thing as the reason 42.4 percent of black women -- a figure that's repeated several times in the movie -- have never been married. Their resentment may be real, but the movie also recognizes, in a very sly way, that the "white women are stealing our good black men" charge is a convenient fallback mechanism, a way of blaming someone else -- anyone else -- for unruly and unpredictable social realities.

So when one of Kenya's work friends sets her up on a blind date, she shows up at the appointed time looking for a black guy. And waiting for her instead is Simon Baker's Brian: Not only is he white, but he's blond, sports a layer of surfer-dude razor stubble, and wears an animal charm on a thong necklace (perhaps a bit of white-boy overkill on the part of the filmmakers, but Baker still manages to survive the role admirably). Embarrassed to be seen with him, Kenya begins flouncing around the cafe, trying desperately to up her "blackness" quotient by complimenting one of the patrons on her dreadlocks. And she's rude to Brian almost to the point of cruelty. But their paths cross again: She's just bought a house, and her overgrown backyard needs help. Brian is a landscape architect and, because he's the most good-natured, well-balanced, easygoing type of white guy around, he agrees to take the job.

One of the movie's tricky little jokes is that in some ways, Kenya is whiter than Brian is: When she first invites him into her home (it takes her a while longer to extend the same courtesy to his well-behaved, affectionate golden retriever), he comments on how "beige" it is. When he takes her to visit the community gardens in another neighborhood -- one far less affluent than the one she lives in -- she screams when she thinks she feels a spider dangling a dainty toe in her hair. But when she and Brian begin to connect, the tenderness he extends to her is lovely: He recognizes her excessive cautiousness not as prissiness, but as the result of her overly sheltered upbringing. And eventually, she comes to realize she can relax with Brian in a way she hasn't been able to with any of her previous boyfriends.

That is, of course, only the beginning. "Something New" is the perfect date movie, not only because it explores a range of suitably romantic sentiments, but because it's so canny sociologically, as well as being delightfully good-natured. The screenwriter, Kriss Turner, was inspired to write the movie after reading about that 42.4 percent statistic in a Detroit Free Press story. But she and first-time director Hamri refuse to turn the movie into a pity party for women of color. And they make it a point to explore the racism directed at Brian by some of Kenya's friends, often just out of thoughtlessness or, perhaps, habit: One friend, Walter (Mike Epps), responds icily to the way Brian pats his back in an impulsive, friendly gesture, asking him why he's always doing that "po-lice pat" thing. Two of Kenya's other black friends check Brian out warily when, helping out at a party she's hosting to unveil her new backyard, he introduces himself politely and offers to get them some drinks. As he heads off to the kitchen, one turns to the other and says, in a moment of beautifully comic straightforwardness, "Hey, the white guy is really nice."

Even Kenya tells him, early on, "I happen to prefer black men -- it's not a prejudice, it's a preference." And the mere presence of the line in the script is an overt challenge to the way many of us think about interracial dating, even when we claim to be open-minded about it.

"Something New" is too set on entertaining us to ever become a screed. It pokes fun at human foibles but also has complete faith in our ability to surmount them. And the performers, to a person, are game: Baker fulfills all the requirements of his role dutifully. A good listener, considerate in the sack, communicative about his own feelings: Brian is more a concoction, a kind of dream boyfriend, than a realistic character, and yet Baker (who previously appeared in the sharply funny "Land of the Dead") makes him reasonably believable.

But it's Lathan, a marvelous actress (and yet another in a long list of actresses of color who deserve to be huge stars), who really holds you. Kenya is the kind of character you want to shake: She thinks she can control every aspect of her life, and we can't help wanting to grab the reins from her, just to free her from her self-imposed tyranny. But Lathan's face shows us how much she suffers under her own self-torture. There's a lovely scene in which she goes out with her family to a modern-dance performance that's also a thinly disguised erotic spectacle. The audience I saw the movie with laughed a little at the dancers' excessive theatricality. And the way they writhe and swoon in each other's arms is a little comical.

But Kenya watches the performance, rapt, because it clues her in to the very things that have been missing from her life: Sensuality, spontaneity, a willingness to ease up on the overly high expectations she has for others and for herself. The dance becomes a half-acknowledged vision of all the things she wants for herself, in addition to the great job and the nice house. And the movie, in a gratifyingly old-fashioned way, allows her to find those things. All she has to do is get used to the white guy. And someday, maybe, she can get him to lose the necklace.