Corporations are feigning eco-friendliness in order to dodge inspections -- only to return to their polluting ways. 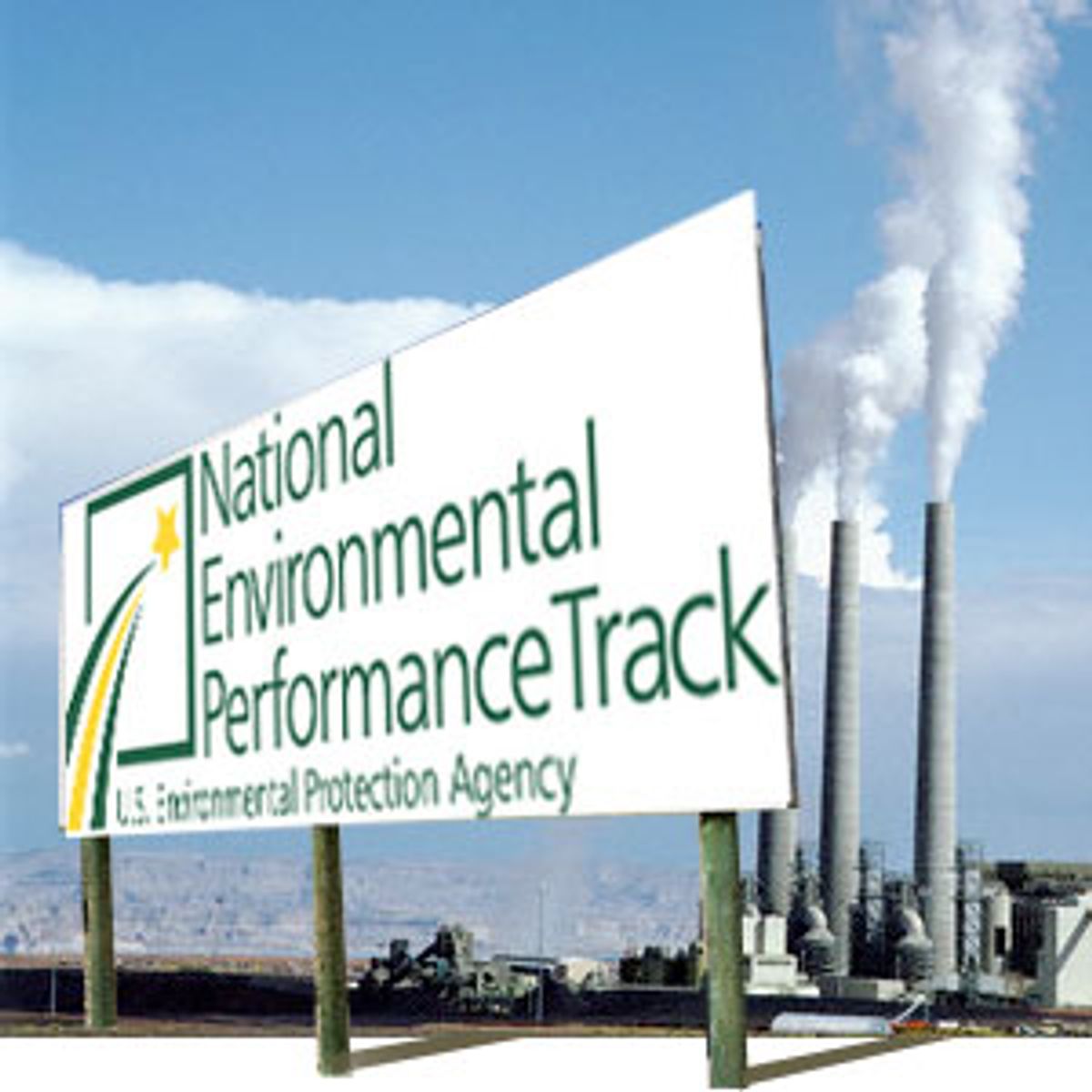 A U.S. Environmental Protection Agency program that's supposed to give recognition and flexibility to companies that are good environmental citizens may in fact be giving a free pass to some firms that are heavy polluters and even lawbreakers, according to a coalition of environmentalists. The agency's voluntary Performance Track program -- whose participants include DuPont, International Paper and Monsanto -- is open to companies that have "high-quality environmental management systems" and "consistently meet their legal requirements," says the EPA Web site. These so-called top environmental performers are encouraged to go beyond basic compliance with environmental laws, and are rewarded with more lenient federal oversight, including looser hazardous-waste storage requirements, less frequent monitoring by the EPA of their air emissions, and placement on a "low-priority" list for routine inspections by EPA officials.

The program -- launched in 2000 under the Clinton administration -- may soon be expanded. EPA officials are expected to announce additional member benefits in the next few months.

That's a worrying prospect to a number of enviros, who say the program already effectively grants companies amnesty from the enforcement of federal air- and water-pollution laws. In November, Natural Resources Defense Council senior attorney John Walke sent a letter (PDF) to the EPA detailing his concerns about the program's efficacy and the possibility of expanded benefits.

The agency never responded, which prompted Eric Schaeffer, former enforcement chief at the EPA and now director of the Environmental Integrity Project, to rally the leaders of 29 environmental organizations -- including Greenpeace, U.S. Public Interest Research Group and Friends of the Earth -- to weigh in on the matter. Last week, they sent a joint letter (PDF) to EPA chief Stephen Johnson reiterating Walke's concerns and requesting that plans for expanded benefits be frozen until the Performance Track program is audited for effectiveness. They point out that 14 program participants appear to have violated one or more federal environmental laws in at least six of the past 12 quarters -- hardly the "continuous environmental improvement" that Performance Track asks of its members.

Walke says his concerns are consistent with those of EPA inspector general Nikki Tinsley (who last week announced that she is stepping down from her post). Tinsley reviewed Performance Track and other voluntary programs last year and concluded that they hadn't yet demonstrated clear environmental benefits. "Tinsley basically said, 'You haven't proven that programs like Performance Track work, so I want a comprehensive audit.' But she was flatly ignored," says Walke. "How can you justify expanding a program that hasn't proven positive results?"

The signers of the letter have not yet received a reply from Johnson's office.

When Muckraker asked EPA spokespeople for specifics about how companies are admitted to the program, how their performance is monitored on an ongoing basis, and whether any had reported data showing illegal activity or slackening environmental stewardship, they declined to answer, offering only the following statement: "Performance Track complements regulation and enforcement. It is not a substitute. Rather, it is another tool that increases environmental protection."

The main problem with Performance Track, says Schaeffer, is that "Bush officials never imposed an oversight system to evaluate the performance of these supposed industry eco-heroes." He also says the application process for vetting candidates is far from rigorous.

For the past two months, Schaeffer has been digging into publicly available pollution records on the factories of 20 of the biggest industry members in the Performance Track program, which has 371 participating facilities in all. His comprehensive analysis will be released next week. Schaeffer will not yet confirm which companies he is investigating, but they likely include 3M, BMW, DuPont, International Paper, Monsanto and Union Carbide. He offers this sneak preview: "The data seems clear that emissions are higher today at some of these plants than before they joined the program."

Says Walke, "You have to wonder why on earth these companies are getting special treatment, especially those that broke the law before and after becoming members. Why aren't they being kicked out?"

Perhaps some credit goes to the Performance Track Participants Association, the trade group that sprang up in 2001 to assist the EPA in "establishing greater recognition and incentives" for the program, as its Web site explains. The association represents several dozen high-profile companies and boasts a full-time executive director (not to mention logo-emblazoned golf shirts).

The PTPA has been organizing regular meetings between its members and EPA officials to talk about increasing the benefits for program participants -- or, as some enviros put it, adding more and bigger loopholes.

Minutes (PDF) from a September 2004 meeting contain both accolades for and gripes about Performance Track. Praise from one member reads, "We had an inspector at our facility and called the regional coordinator, and within 15 minutes the inspector was called and told to leave the facility."

Not all participants have been so lucky, though. Another complained, "Inspector came to Performance Track facility knowing it was a Performance Track member. They said that they had to inspect anyway because they are required to inspect every major facility every so often. What happened to low priority for routine inspection? Message is not being relayed."

Walke worries about the changes the PTPA might help push through, saying, "Never in my career have I seen a trade group form around a certain internal EPA initiative." He says plans now being drawn up at the EPA would expand the program to include partnerships with state-level environmental agencies, which would also agree to reduce or eliminate inspections and give other benefits to member companies. (Already nine states have signed memorandums of agreement to adopt Performance Track, and more partnerships are in the works.) Another proposal would expedite permitting for projects such as factory expansions.

Even if these changes were headed off, Walke and his cohorts would remain skeptical of a system that doles out a bundle of carrots and stashes away the firm stick of law enforcement.

Says Walke, "I seriously question the appropriateness of any program that offers deregulation as an incentive to drive superior environmental performance."