Remember when Steve Martin, Albert Brooks and Woody Allen were funny? What on earth happened to our favorite funnymen? 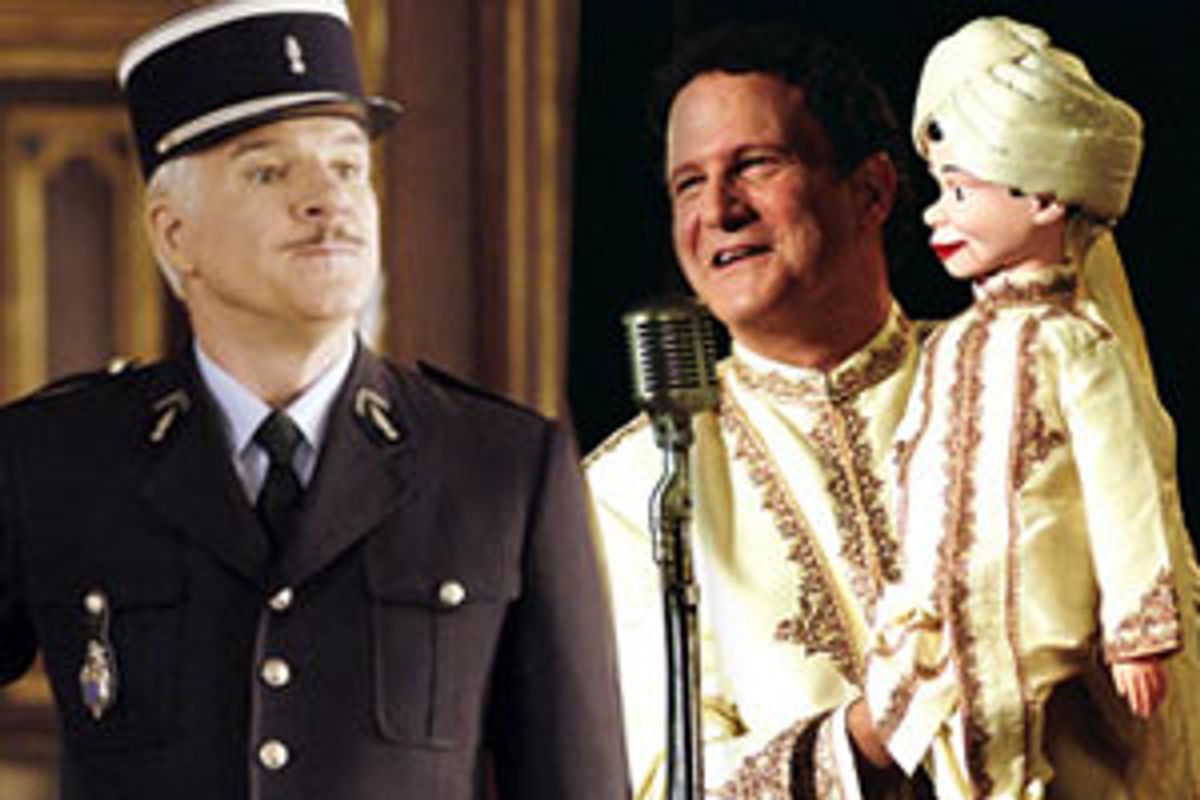 In Shawn Levy's gaspingly unfunny "The Pink Panther" -- not a remake of the Blake Edwards original, but a version of some vague idea of the original -- Steve Martin may play Inspector Clouseau. But at least he's smart enough to know that he can't play Peter Sellers. In the movie's production notes, Martin says, "I bent it a little bit because I am a different person. When I looked at those movies, I understood that Peter Sellers could ad-lib all day within the context of the character." Martin knew he had to reinvent the role, which he did mostly by devising an identifiably Martinesque faux-French accent that sounds like a speech impediment.

Martin's Clouseau is a performance draped precariously on a thumbtack of a gimmick. "The Pink Panther" is lousy for many reasons: For one thing, its rhythms wobble and weave drunkenly, and even the potentially funny jokes hang in the stratosphere, twinkling dimly with far too much space around them, before crashing to earth. But because "The Pink Panther" is a star vehicle, Martin has to bear most of the blame. Like another recent disappointment from a comedian many of us long ago came to love, Albert Brooks' "Looking for Comedy in the Muslim World," "The Pink Panther" cements the idea that, no matter how much faith we place in our favorite comedians, their presence alone is never enough to guarantee laughs. Brooks' and Martin's recent failures carry a particularly potent sting: How can comedians we've come to trust so much let us down so hard?

It's tempting to go easier on comedians than we do on other performers, because the mechanism of what makes a person funny is so frighteningly precarious. For better or worse, building a comedy career is like building a brand. We know Steve Martin has made us laugh in the past: "L.A. Story" and "The Jerk" do seem like ancient history in light of recent check-cashing exercises like the "Cheaper by the Dozen" franchise, or vehicles designed to lend Martin the aura of classiness he seems to crave so desperately, like the recent (and rather creepy) film version of his novel, "Shopgirl."

But even though Martin has tried a range of roles over the course of his career (and has been terrific in some of the more serious ones, like Herbert Ross' desperately beautiful 1981 "Pennies from Heaven"), we still -- naively, maybe -- want to believe that his presence in a comedy is a stamp of quality, or at least just a promise of it. It's hard to know how comedies like "The Pink Panther" are conceived, but my guess is that some guys were sitting around in a room one day and said, "Hey -- let's have Steve Martin play Inspector Clouseau!" And there, any serious dialogue ended, even before it began. A rudimentary plotline (if you can even call the mechanics of "The Pink Panther" a plot) was sketched out: Kevin Kline plays an officious, ambitious French bureaucrat; Beyoncé Knowles is the pop-star girlfriend of a murdered soccer coach, played (too briefly) by Jason Statham. All Martin has to do is show up and be funny.

Obviously, that's an oversimplification of how a movie comes together. But looking at the result, how are we supposed to know differently? Brooks' "Looking for Comedy in the Muslim World" suffers from similar problems, although Brooks' case is far more frustrating. Like many moviegoers, when I first heard about the premise of Brooks' movie -- a comedian is sent to the Middle East by the State Department to find out what makes those mysterious Muslims giggle -- I couldn't wait to see what he'd come up with. Brooks' face alone, so deadpan and so anxious, has always seemed emblematic to me of the way we all, deep down, feel so uncertain about our place in the world. And yet Brooks has always been more than just a quivering pile of neuroses; he has some bite, too.

But as vehicles go, "Looking for Comedy in the Muslim World" turned out to be a clunker, and in comedy terms at least, one with a blasphemously misleading title. The picture feels overworked and yet weirdly unformed, as if Brooks had tried too hard and yet stopped far short of where he needed to go. (The woman who plays his Indian assistant, Sheetal Sheth, is much funnier than he is -- her timing leaves his in the dust.) The movie casts wide, safe, cushy loops around any potentially touchy subject, like, say, religion. The whole enterprise feels particularly lame in light of the recent furor over those Danish cartoon caricatures of the Prophet Mohammed. Forget mild jokes about Gandhi; now we really know what Muslims don't find funny. What's the point of tackling a subject like this one if you're not going to risk getting the studio burned down?

There are plenty of other terrific, or at least just amusing, comics who have either sold out (intentionally or otherwise) or been cast in movies that don't make the most of their gifts. Adam Sandler has sometimes been an interesting and charming actor, but he's made his fortune in movies that coast on genuinely dumb gags. Robin Williams, an enormously gifted stand-up comic, didn't do himself any favors when he stuck that enema bulb on his nose. And while Jim Carrey -- whose "incognito" appearance at the MTV Movie Awards a few years back, as a Foghat-loving hippie dude, remains one of my favorite TV surprise appearances -- is fairly forgettable in "Fun With Dick and Jane," at least movies like "Eternal Sunshine of the Spotless Mind" suggest that we can't always be sure what to expect of him.

And just for a moment, let's talk about the grandpappy of great modern comics gone bad: Woody Allen. Many moviegoers and critics often speak fondly of Allen's comedies, as if they were cute little doodles he drew in the margins of his notebooks at school, but reserve their biggest pots of incense for his dramas -- "serious" pictures like the ponderous "Crimes and Misdemeanors" and that baffling critics' darling "Match Point."

As much as we all claim to enjoy comedies, we're often unwilling to take a comic actor seriously until he or she tackles "serious" work, an expectation that comics themselves are only too keenly aware of. But they know as well as anyone that great comedy -- and even just minor comedy -- often harbors serious themes. Mike Myers (a wonderful comic actor who needs to take a break from doing cartoon voices and give us a real comedy) has often quoted Henri Bergson's claim that comedy is basically the recognition of your own mortality. You can't get much more serious than that.

So why is it that even a late-era Allen comic masterpiece -- like the unnervingly funny 1993 "Manhattan Murder Mystery," which is also about the sometimes aggravating comfort of middle-aged love -- is treated as a trifle, while "Match Point," with its dunderheaded moralism, is lauded as a return to form? Allen's movies -- both "Match Point" and his indefensibly stinky comedies, like "Melinda and Melinda" and "Anything Else" -- have aggravated me in recent years. But watching Allen on the 2002 Oscars, in a stand-up performance that was charming, light and sly, I felt all my old love for him flooding back. Where had he been hiding all this brilliance for so many years? And why? As hard as some of us have been on Allen -- and as far as we know, no one has been holding a gun to his head as he makes one crappy movie after another -- it's troubling to think that he undervalues everything that made him great in the first place. What he thinks an audience expects of him has become inseparable from what he expects of himself.

Maybe we've come to expect too much from comic actors like Martin, so much that his failures stand out far more baldly than his successes do. Two of the biggest comedy hits of last year, "Wedding Crashers" and "The 40-Year-Old Virgin" were also hits with critics. These were script-driven pictures rather than movies boasting big-name comic stars. (Vince Vaughn and Owen Wilson are well known and well liked among audiences, but they've never been considered big-name draws. And even though Steve Carrell may have been known to fans of "The Daily Show" and the American version of "The Office," "Virgin" seemed to come out of nowhere. I remember seeing posters for it a month before its release and wondering, "What the heck is that?") These are also movies in which the basic premises -- a 40-year-old guy who's never had sex; a pair of best buddies who freeload off other people's parties for fun -- provided a broad enough canvas for a range of good jokes, instead of just matching up a star with a famous (and beloved) character and hoping for the best.

Steve Martin can obviously afford to have a flop or two. But who wants to pay good money to sit through one, when we know he's capable of giving us more? My all-time favorite Martin bit, if I had to choose one, may be his lovelorn magician, the Great Flydini (an act Martin brought, memorably, to Johnny Carson's "Tonight Show" in the last week of its run). Flydini draws an array of objects -- a string of brightly colored scarves, a few eggs, a glass of wine -- from the fly of his pants. When he draws on a cigarette, smoke emerges, in gentle puffs, from his trousers; when a curvy cutie struts by, a lush bouquet pops out. But the woman rejects him, and so for the finale, a Pavarotti puppet emerges from between the zipper teeth, singing an aria of lost love and betrayal, an echo of the pained expression Martin wears on his face.

The Great Flydini, an act that spans just a few minutes, envelops the essence of comedy and tragedy; it also tangles with complicated notions of male bravado and insecurity. To give up on Steve Martin forever is to betray the promise of the Great Flydini. No matter how bad "The Pink Panther" is, we have to hope Martin has some surprises down his pants yet.