Coretta and Hillary, not yet free

Both women got under men's skins in a peculiar way. And sadly, both of their legacies are likely to be marred by the actions of their husbands. 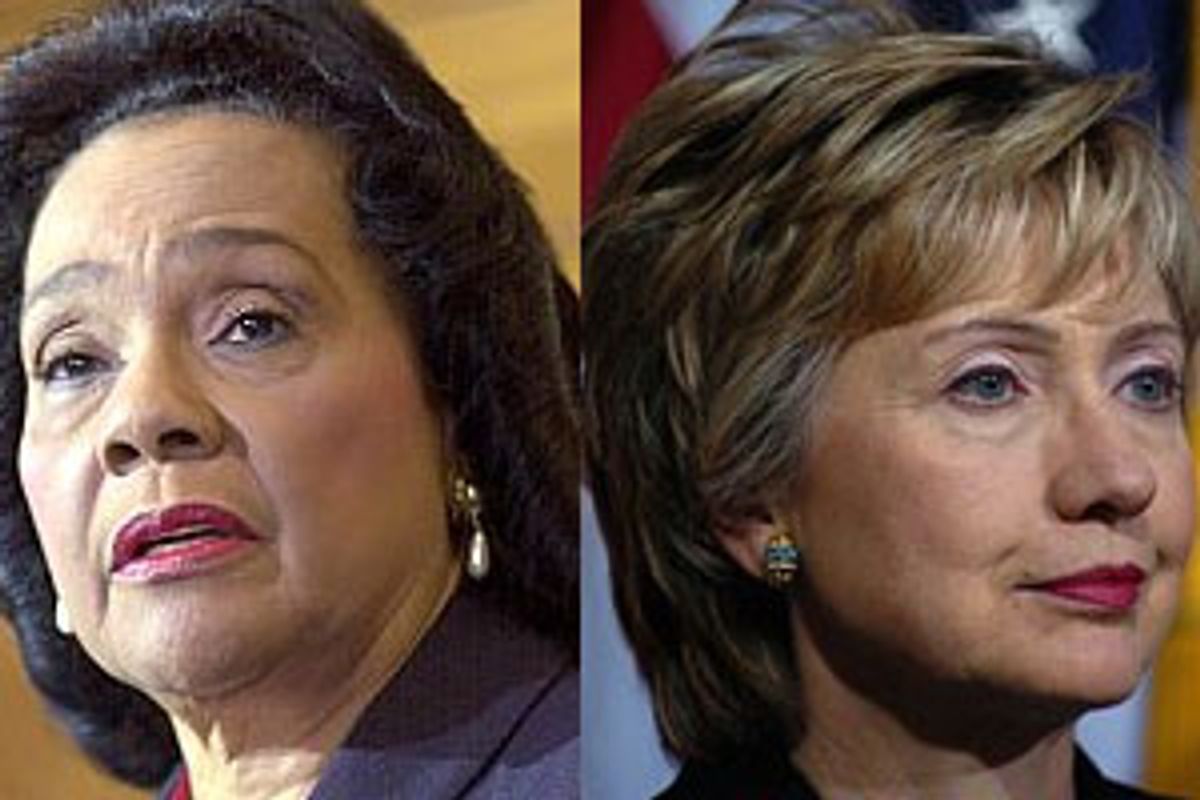 As Hillary Rodham Clinton took the pulpit next to her husband at Tuesday's funeral extravaganza for Coretta Scott King, I couldn't help thinking that the Clintons' bittersweet eulogies described not so much the recently departed "first lady of the U.S. civil rights movement" (Reuters) as the up-and-running former first lady herself. First there was Bill Clinton's slightly out-of-left-field reminder that Coretta King was an actual woman, "not a symbol, a real woman who lived and breathed and got angry and got hurt and had dreams and disappointments." And then Sen. Clinton took the microphone to speculate on the trepidation of a go-getting young Coretta as she embarked on marriage to a man of destiny. "'What am I getting myself into?'" the senator imagined the bride asking herself.

What hurt and anger and disappointment indeed! This hint of buried narrative was a tantalizing contrast to the somewhat hollow tributes to Coretta Scott King in the days since her death on Jan. 31. For there is an elephant in the room, acknowledged in passing if at all, and it is one that Sen. Clinton has long trained herself to ignore. Both of these women entered the public arena as wives, only to endure the sexual brinkmanship of their charismatic husbands, so brazenly compulsive that the men would not curb it even when it jeopardized their professional effectiveness and their historic missions along with their marriages. And for the two wives -- ambitious, talented women who took flak for wearing their birth names as badges of independence -- there was extra humiliation in such spectacular "failure" at a marital role that they had assumed ambivalently, subordinating their own dreams to their husbands'.

Now that Coretta Scott King has received her due props, historical honesty demands that we address the ways in which her private drama as Martin Luther King Jr.'s wife intersected with his epic trials as a world statesman -- and shaded both their legacies. When I think of the Passion of Coretta (and Coretta, like "Hillary," entered the culture on a first-name basis, having ceded the acquired last name to the bigger star), I flash not on the April night in 1968 that the call came from Memphis; I think of a day in January 1965, soon after the couple returned from collecting King's Nobel Peace Prize in Oslo, Norway, when she opened a package sent to his office and decided to play the enclosed audio reel. My guess is that she was devastated but not surprised by its contents: profane banter leading to sounds of erotic ecstasy, which an accompanying letter confirmed emanated from her husband. Because the letter further urged King to kill his "filthy, abnormal fraudulent self" to spare his race from the shame of his exposure, the mailing would go down in history as "the suicide package," and from then on King's human appetite clashed dangerously with his moral mandate. The tape, a soundtrack spliced together from King's bugged hotel stays, was the anonymous work of the Federal Bureau of Investigation, whose director, J. Edgar Hoover, hounded King with the same prurient fury that independent counsel Kenneth Starr would later turn on Hillary Clinton's husband.

Hillary had her equivalent moment of truth -- her husband's confession in 1998, after months of lying, that his relationship with Monica Lewinsky was more than the avuncular mentoring of a lost young woman. Like Coretta, Hillary made an accommodation with her marital predicament, as she had arguably done at least six years earlier, when the world first became aware that there was an alternative spelling of "Jennifer." But whereas Hillary was obliged to acknowledge her trauma -- albeit (in her autobiography) with a certain unconvincing Blondie-and-Dagwood triteness -- Coretta adopted a more aggressive form of denial, dismissing the FBI tape as incomprehensible "mumbo jumbo" and saying that she "wouldn't have burdened [King] with anything so trivial" as suspicions of infidelity, which "just didn't have a place in the very high-level relationship we enjoyed." (Taylor Branch reports in "At Canaan's Edge," his recently published third volume of his King biography, that a few months before his death King informed Coretta -- while she was recovering from a hysterectomy! -- of his long, emotionally absorbing relationship with a woman from Los Angeles.) "High level" speaks to another stigma borne by both Coretta and Hillary: intimations that the husbands strayed because of their wives' womanly deficit. And so Hillary is cast as the castrating (or more recently, "angry") man-hater, while Coretta was the withholding "ice queen."

As these "threatened male" tropes suggest, both women got under men's skin in a particular way. What they shared was a certain chilly pride, the overdetermined dignity of the often betrayed. The compromises Hillary Rodham made are well known -- quitting the Eastern corridors of power for untested political fortunes in Dogpatch. Yet her "personal journey" as a woman was typical of her second-wave feminist cohort, springing from a context of middle-class privilege and entitlement. Coretta's feminist yearnings, on the other hand, were almost prophetic for her time and even more remarkable for her background. She was a poor black child of rural Alabama, who had won scholarships to Antioch College and the New England Conservatory of Music, where she was training to be a classical singer when she met Martin King at age 24 in 1952. In her 1969 autobiography, Coretta dryly renders his courtship technique -- he seemed to be auditioning more than wooing her -- and gigs him back with a gratuitous reference or three to his shortness. She was very clear even then about the dilemma of marriage: "I did not want anything to stop me, to stop my career. And my emotions told me that this might." The emotions were right, notwithstanding her excision of "obey" from their wedding vows. Not only did she have to abandon her artistic aspirations; her forcefully "traditional" husband barred her from assuming the activist role in his movement that she fervently coveted. He insisted that a woman's place was in the home with the children, though he also would not have wanted her on the road putting a damper on his nightlife.

Ironically, as one student of Martin Luther King, Michael Eric Dyson, notes, King's early death "would redeem his wife from the limits he placed on her while he lived." It is safe to assume that Coretta achieved far more as King's posthumous first lady than she would have in the singing career he forbade. Dyson quotes a staff member who believed that the marriage would not have survived had King lived. But Coretta's refusal ever to admit to any conjugal problems gave her such solid proprietorship of the legacy that 30 years after King's death insiders mockingly referred to her as "My Husband."

It's probably also true that Hillary Clinton has achieved at least as much as Hillary Rodham would have, though her election to the Senate will hardly go down as a glittering landmark in the liberation movement launched by another casualty of the new year, Betty Friedan. According to conventional wisdom, it was only after her husband took her down a few notches that the public found Hillary sympathetic enough for a political office of her own. And unlike Coretta, who became full-throated and militant once in the limelight, transcending the flawed relationship that had put her there, Hillary has transposed the lessons of marital accommodation to the public sphere, muffling her once fierce idealism to a drone of moderate opportunism in the pursuit of her husband's old platform. (Coretta did take a principled stand on Iraq and bucked many of her own constituents in her forthright defense of gay rights.)

The compromised marriages of the Kings and the Clintons will surely end up marring the wives' legacies along with the husbands'. The tacky crassness to which both Coretta and Hillary stooped was conceivably rooted in marital disappointment. One of Hillary's more regrettable defining moments was her hitting up donors for that vulgar exit loot at the end of the Clinton presidency. One could argue that it was Bill's shortcomings as a provider -- not to mention the huge legal bills compelled by his sexual recklessness -- that put this Wellesley girl from a nice family in the position of soliciting housewares.

Martin Luther King, who was antimaterialistic to the point where admirable becomes neurotic, left his wife and four children in precarious financial condition as well. A common Freudian take on King's fiscal asceticism was that it reflected the guilt he felt over his potentially catastrophic libertinism. Since King abdicated his breadwinning role in a household where he had decreed the rigidly traditional sex roles, it is not so surprising that Coretta and her children ended up embarrassing his memory with ham-fisted attempts to turn him into a financial commodity, wringing profit from the indelible patriarchal words and images that properly belong to history.

Coretta Scott King has rejoined her husband, in the contentious realm of historical dynamics. Hillary Rodham Clinton, meanwhile, grapples with the temporal challenges of the personal and the political, the continuing struggle of all women, black or white, to be free at last.

Diane McWhorter is the Pulitzer Prize-winning author of "Carry Me Home" and a young-adult history of the civil rights movement, "A Dream of Freedom."