Harrison Ford is outshone by his costars in this crisp, conventional thriller. 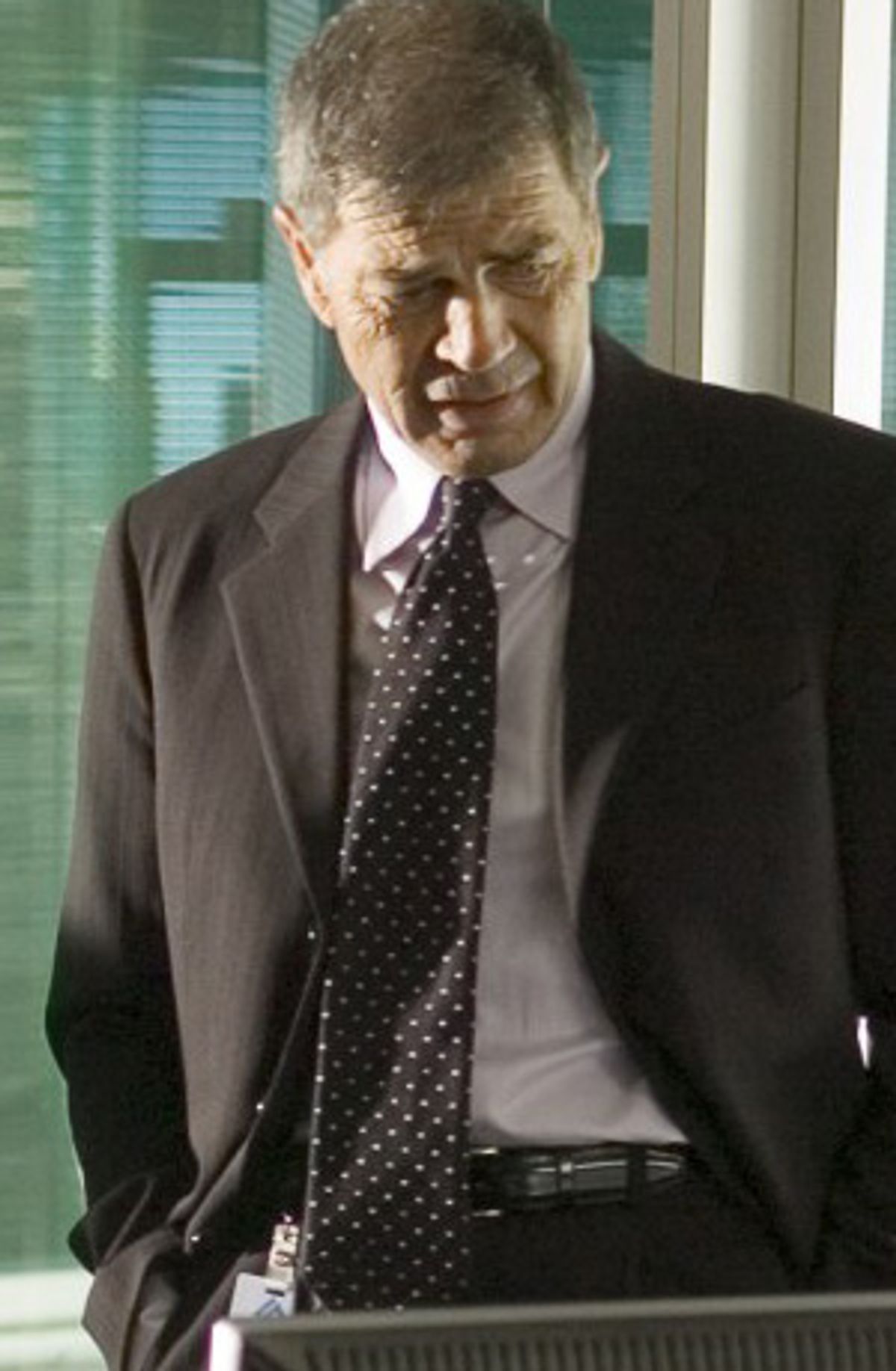 Let's take a moment to sing the praises of the older man in the movies: He's the guy with just the right amount of hair, and more than a few of those boyish, crinkly laugh lines around the eyes. He wears off-the-rack suits as if they'd been made to measure on Savile Row, and the mischievousness in his expression assures you he could get a woman into his bed simply by making her laugh. He's the kind of actor who makes us think that maybe hitting 60 isn't as bad as it's been made out to be. And you can see him right now in Robert Loncraine's "Firewall."

His name is Robert Forster.

The other older guy in "Firewall," Harrison Ford, actually has more screen time -- he's the star, while, sadly, Forster shows up for all of about five minutes. But every alleged thriller has to have an alleged star, and no matter how charismatic Forster is, or how fine an actor he is, in "Firewall," it's Ford who's supposed to be the big draw.

Ford has often been a likable enough performer. More often than not, though, he's workmanlike to the point of dullness. And in "Firewall" he has a role that asks little of him: He plays the vice-president of security at a Seattle bank, a computer whiz who has designed ultra-sophisticated systems to outwit hackers, who suddenly finds himself at the mercy of a ring of even smarter computer geeks, led by an urbane villain with very blond eyelashes (Paul Bettany). Bettany's henchmen, outfitted in hoodies and latex gloves, break into Ford's home -- a Pacific Northwest palace that looks to be made of sheets of glass and some wooden sticks -- and place his wife (Virginia Madsen), two kids and dog under house arrest. To save his family, Ford has to help these thugs steal $100 million from his own bank.

You've probably seen at least the bare bones of that premise somewhere before -- it's not so far off from Blake Edwards' 1962 "Experiment in Terror," for one thing -- but that isn't necessarily the problem with "Firewall." Loncraine -- whose last picture was the flirtatiously entertaining 2004 "Wimbledon" -- approaches the material with a great deal of crisp professionalism. (The script is by Joe Forte.) He's smart about where to put the camera and what to do with it -- the cutting and the camera angles are vaguely stylish without trying to be bullishly hip. And you may enjoy "Firewall" more than I did if you know upfront that Loncraine doesn't introduce the family dog, a dust-moppish poodly-looking guy named Rusty, only to kill him off for cheap effect -- just one indication of the way Loncraine respects his audience.

But much of "Firewall" consists of watching Ford attempt to express the pain and fear he feels over the potential fate of his family, although it's possible he's simply trying to suppress an impending belch. Ford, whatever his current flaws are, used to do more than scowl through a role. He does have one brilliant moment here, just after he's beaten the stuffing out of a baddie: He stumbles along, clutching an old wooden railing for balance, and his hand quivers and skitters as if it were no longer attached to his body. It's a fine bit of physicality, largely because Ford isn't even pretending to feel younger than he is. The involuntary quivering of that hand tells us that Ford's character just went further than he knew it was possible to go, and his nerves, his joints, his muscles, are turning against him because of it.

Mostly, though, it's the other actors who breathe life, at least occasionally, into the picture: Madsen doesn't have much to do here, other than play the valiant mom. (Is this the best that a terrific, recently rediscovered actress like Madsen can expect in middle age? At least Ford gets to beat up bad guys.) Mary Lynn Rajskub, of "24," is fun to watch as Ford's cranky-efficient administrative assistant. And the always-superb Bettany, with his corruptible-altar-boy demeanor, makes a devilishly innocent-looking villain. (After he and his good-for-nothing pals invade the family home, he offers a cookie to little Johnny, who suffers from food allergies, and you can guess what happens next.)

But as good as those actors are, they can't do much to redress one of the movie's most significant flaws: There's just not enough of Forster, who has a small role as Ford's work colleague and confidant. Forster, whose career got a jump-start after his marvelous performance in Quentin Tarantino's finest picture to date, "Jackie Brown," works steadily, the sort of blessing actors of any age would have cause to be grateful for. But his great charm notwithstanding, he doesn't get starring roles. "I wanted something Dean Martin-ish," he says in "Firewall" as he shows off his compact bachelor pad to a first-time visitor. The line is tossed off so casually you could almost miss it, and it makes you want more of Forster than you get in "Firewall." Sometimes star quality shines out from the corners of a movie, and not from the center.