This sweet, gentle concert film reminds us how vital it is to keep music in our lives. 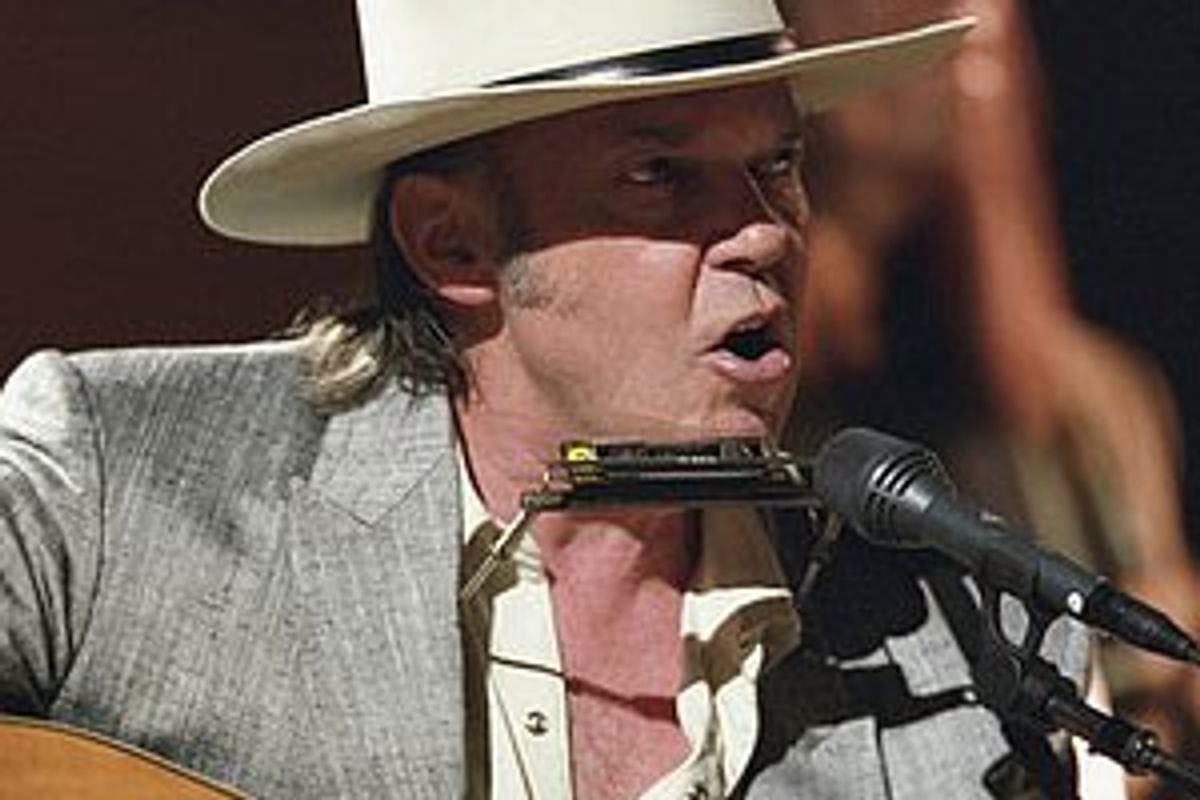 When you're in your 20s, it seems incomprehensible that you'll ever reach the age where listening to music takes actual work. You can't imagine a time when the act of listening -- of making time for it in your life, and, even more significantly, of keeping yourself open to new things -- is no longer blissfully effortless. And sure enough, for most of us that day eventually comes: It may hit when you're 30; you may be able to stave it off until you're 40. But at some point, you find yourself casually asking the youngest people at your workplace, "So -- what are you listening to?"

It's unlikely, in 2006, that Neil Young is going to be any baby boomer's big discovery. And yet Jonathan Demme's Neil Young concert film, "Heart of Gold" -- which documents two live performances that Young and a sprawling outfit of longtime collaborators gave at Nashville's Ryman Auditorium last summer -- deals very directly, if perhaps a bit too politely, with the question: How do you keep music with you as you get older?

Over the years, Young has been constantly reinventing the answer. He's never been just one performer: For every college kid who ever mellowed out to "Harvest" by the light of a candle stuck in a Mateus bottle, there have always been plenty of others who much preferred the wild sonic underbrush of his work with Crazy Horse. But the constant has always been Young's voice, a floating silver reed with all the colors of moonlight reflected in it.

"Neil Young: Heart of Gold" is a love letter to the consistency, and the familiarity, of that voice: The first half of this performance consists of material from Young's newest album, "Prairie Wind," whose songs deal with subjects like the death and illness of parents, and the mournful resignation of "empty nesters"; the second half is a selection of older songs culled largely from the albums "Harvest" (1972) and "Harvest Moon" (1992). The performers joining Young onstage include Emmylou Harris (who grows more luminous, not less, as the years go by), legendary steel guitarist Ben Keith, songwriter and keyboard player Spooner Oldham, and Mar-Keys' trumpeter Wayne Jackson, among many others; the stage has the feel of a casual reunion picnic, the kind of vibe that's more likely to flourish at the Ryman -- the original home of the Grand Ole Opry, and a room with what may be the finest acoustics in the universe -- than anywhere else.

"Heart of Gold" is a sweet, gentle picture, if not a particularly exhilarating one. Demme's 1984 Talking Heads concert movie "Stop Making Sense" is one of the finest concert films ever made -- its beautifully organic structure is the perfect foil for David Byrne's joyously willful weirdness. "Heart of Gold" is a far more relaxed piece of work: Demme films the performance with straightforward austerity, which suits both the material and Young's laid-back demeanor.

Young and the band members are dressed in neatly tailored traditional western get-ups made by Manuel, a protégé of the great western-wear tailor Nudie Cohen. And at one point, Young brings out an acoustic guitar that, he tells us, used to belong to Hank Williams. Young's apparent goal is to connect the past seamlessly with the present, and Demme is in tune with him all the way. He's particularly sensitive to the wobbly rhythms of Young's between-song patter: Young has a tendency to begin a story that seems inconsequential only to end up in an interesting cul-de-sac, as when he explains how, years ago, he bought a ranch, just as he'd "become a rich hippie for the first time." The elderly caretaker who lived on the property marveled at the fact that such a young man could afford to buy it. Young explains that the caretaker inspired him to write "Old Man," a song that Neil Young fans and detractors alike have heard so many times by this point that they may prefer never to hear it again -- and yet somehow, when Young performs it here, it feels enriched by the story behind it.

The biggest problem with "Heart of Gold" may be that Young's newer material is earnest to the point of being dull: Bluntly uninspired lyrics like "I must apologize for the troubled times" kept popping out at me. The second half of the performance, featuring the older, more familiar songs, is livelier, although it does lead us into the dangerous territory of wondering if Young has anything new to bring to this material.

But "Heart of Gold" isn't about breaking new ground; it's about ensuring continuity between the past and the present, and cutting a path into the future. By the time the whole ensemble takes the stage for a version of Ian Tyson's gorgeous "Four Strong Winds," we've stopped questioning what all those people are doing up there, and what they might be trying to prove. In their embroidered rayon shirts and crisply cut jackets, they're performers who have opened themselves so wholly to their surroundings that they've become a part of it. The ghosts of the Ryman are singing through them.