A new book explores the juicy relationship between food and sex. 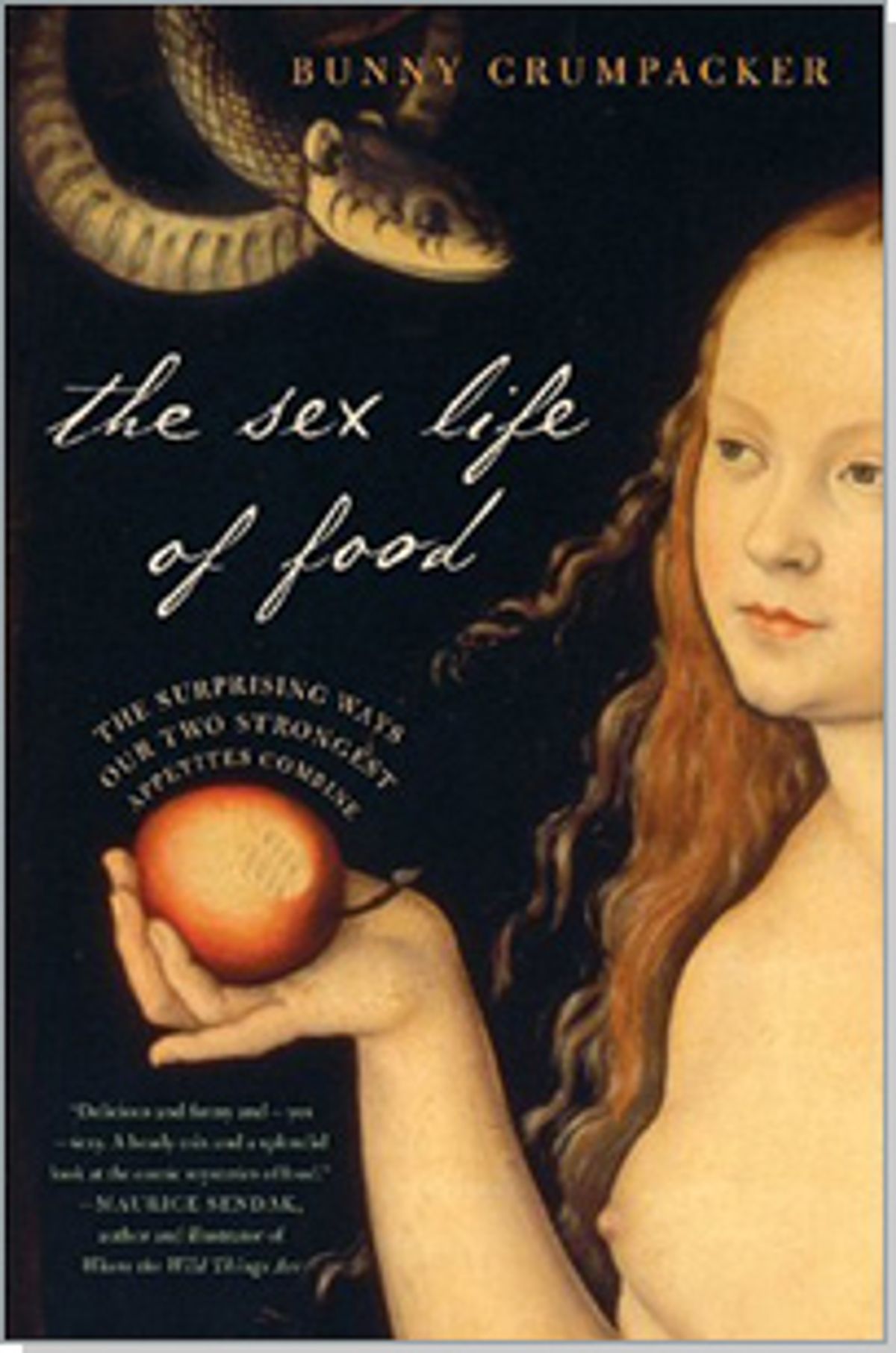 A new book by food writer Bunny Crumpacker, "The Sex Life of Food: When Body and Soul Meet to Eat," takes an expansive look at that loaded relationship, mingling culinary history, psychology and pop culture to better understand what we crave, and why. Whether it is the simple comforting pleasures of macaroni and cheese or vanilla ice cream, or the thrilling exoticism of fine caviar, foods soothe not only physical but emotional aches. Some foods mirror our moods; a bowl of cold cereal begs to be eaten alone while a roast turkey symbolizes a feast to be shared. Meeting your valentine for a meal? Pay close attention, Crumpacker warns, because eating can be as much a test of sexual compatibility as a matter of sustenance.

With luscious descriptions and spicy stories of gastronomic erotica, Crumpacker's book leaves readers with a renewed appetite -- and lends credence to the maxim that we're defined not only by what we eat but by how we eat. Salon spoke with the author by phone from her home in upstate New York about the phallic beauty of figs, the strange habits of Adolf Hitler and the perfect Valentine's Day dinner.

Forgive me if this is too personal -- but was there something in your own life that compelled you to write about the relationship between food and sex?

Of course it's personal, but actually I didn't start out wanting to write about food and sex, I started out wanting to understand why we eat the way we do. But what I discovered was that sex and food were just so inextricably linked that it was hard to write about one without the other. And the kinds of things I was looking at -- like the psychological power of food -- were so wrapped up with sex, in that it seemed to all circle back to feelings of hunger and desire. You know, little babies who are hungry are also very sensual. So I think that the things that we begin with, in a way, stay with us all our lives -- it's just that we get much better at diverting our desires and covering them up. They become less and less obvious, but they're still there.

Do you think that that's why we have food fetishes and so many of our sexual fantasies contain elements of food and consumption?

Sure. I don't know, but it might go the other way around too -- so that our food fantasies have elements of sex in them.

What do you think are the most enduring edible symbols of desire?

Well the first thing that jumps into my head is the apple. It's just loaded with symbolism and history in that, in the Western world, it goes all the way back to Adam and Eve in the garden. But there's also Snow White and the poison apple. And there's stuff in the Song of Solomon about apples.

Do you think you can make guesses about someone's sexual behavior or hang-ups based on their appetites?

Absolutely. If someone eats really piggishly there's probably a safe guess that something about them strays from the straight and narrow and just isn't quite normal. Then there are people who eat really, really fast -- so that their food's gone after two bites -- and that can mean all sorts of things. What pops into my head is that they might be nervous people, worried about someone taking what belongs to them. Though I never feel comfortable making sweeping statements, that kind of eating might be a symbol of selfishness, a sign that someone is not very social, not comfortable with himself. But the point is that it means something.

Yes, well, I found it just amazing that this man who was responsible for the deaths of 6 million Jews and millions of others as well -- that an incredibly bloody, angry tyrant refused to eat meat because he thought it was too decadent. Instead he favored lime blossom tea and porridge and vegetable soup. It just is such a contradiction; the acts he was responsible for were barely human, yet there he was with his dainty diet. Hitler believed that the Jews were the way they were because they ate meat, but of course -- except for the little tiny group of people to which he belonged -- everyone in the world at that time also ate meat. I think that Hitler tried desperately to be in control, to keep himself in check, and food was one way of attempting that. But it was impossible. For instance, along with the lime blossom tea, he would eat quantities of chocolate and coffee, sometimes dozens of cups a day, and then would complain about not being able to sleep.

Of course, the sensual aspect of food is not just its taste -- it's also smell. You make a joke that women should forget Chanel No. 5 and just dab pumpkin pie behind their ears. Why do you think that so many aromas that get people aroused are warm, domestic scents?

Freud would love that.

Indeed. I wish I knew what he ate. He smoked cigars, but then again, his line about that was, "Sometimes a cigar is just a cigar." As long as it was his, I guess!

Since Valentine's Day is Tuesday, I'm wondering what you'd put on a menu for the ultimate seductive feast.

You know, I've been thinking about that and there are two things I'm pretty sure of -- not because I'm actually going to cook them but because I like to cook things in my head! One is the chocolate pots de crème recipe (see below) that I include at the end of my book, because it's very dense and rich, yet not at all suffocating. Chocolate is easy; it's just sexy, from the first bite to the last. It melts in your mouth, it's very sensual in taste and feel, and it's exotic, special.

The other dish I'd choose would be shrimp -- though I'm not sure exactly how I'd prepare it -- certainly nothing too garlicky or heavy. They're considered a classic aphrodisiac, and though I don't really believe in that, there is something about taking the shells off shrimp that is so aggressively physical.

It seems like many shellfish are believed to have aphrodisiac qualities.

Sure, oysters especially. And they do contain a chemical that causes arousal. So there is a physical effect, though I don't think that's the most important factor. With shrimp it's more the opening, the peeling -- you almost want to serve them with the shells on so your hands can be busy!

You make a playful point late in the book about how so many of us now go to restaurants to get our meals -- to pay for edible pleasures, if you will -- that we might think of it as a metaphor for prostitution.

Definitely. Especially being taken out to eat when someone else is paying for you. The whole restaurant experience is one of being served, and in our society it's customary to give something back when you receive a gift. So the question becomes, what are you going to give? There are so many possibilities ...

Of course, that's just one way of looking at it. There are other impulses behind being taken to dinner -- a desire to feel you're being cared for and sought after, for instance.

Do you think there is a difference between loving foods and sexy foods?

Oh, what a good question. Yes. Oatmeal isn't sexy but I love it. So there are comforting foods like that -- and then others where sometimes it just feels good to bite, like spareribs or chicken you eat with your hands. Food can be a lot of things, and while sex is a huge part of it, it's not everything.

My editor and I joke about how "The Sex Life of Food" sounds like a story about oatmeal falling in love with strawberries. And it's true, oatmeal isn't sexy unless you dress it up with strawberries and brown sugar. But it's still good. And it fills another need. Passion is one thing and love is another, and when you're lucky you get them both.

These pots de creme are down to basics: chocolate, milk, sugar, and vanilla. The end result is dense and rich; a little whipped cream on the side is lovely. And perhaps a few berries, rasp and straw? You could use cognac or rum instead of vanilla, yes. The original recipe was from the New York Times and included a raw egg. I'm willing to risk all sorts of things, but not a raw egg. Not even one that has been tempered with hot milk.

1. Heat milk to the scalding point.

2. While the milk is heating, place all the other ingredients except the whipped cream in a food processor bowl or blender.

3. Add the hot milk. Holding paper towels or a kitchen towel around the processor bowl so it won't leak, process until chocolate is completely melted, between 10 and 20 seconds, longer if needed.

4. Two choices: Pour the chocolate into tiny cups -- demitasse cups work nicely if you have them; pots de creme cups, with their little covers, are perfect by definition. Or pour the chocolate into a pretty serving bowl and spoon out portions from there. Refrigerate for at least 4 hours. Serve with whipped cream.

From the book "The Sex Life of Food: When Body and Soul Meet to Eat" by Bunny Crumpacker. © 2006 by the author and reprinted by permission of St. Martin's Press.