Julianne Moore and Samuel L. Jackson manage as best they can in this patchy thriller about a child who goes missing and the racial tensions that ensue. 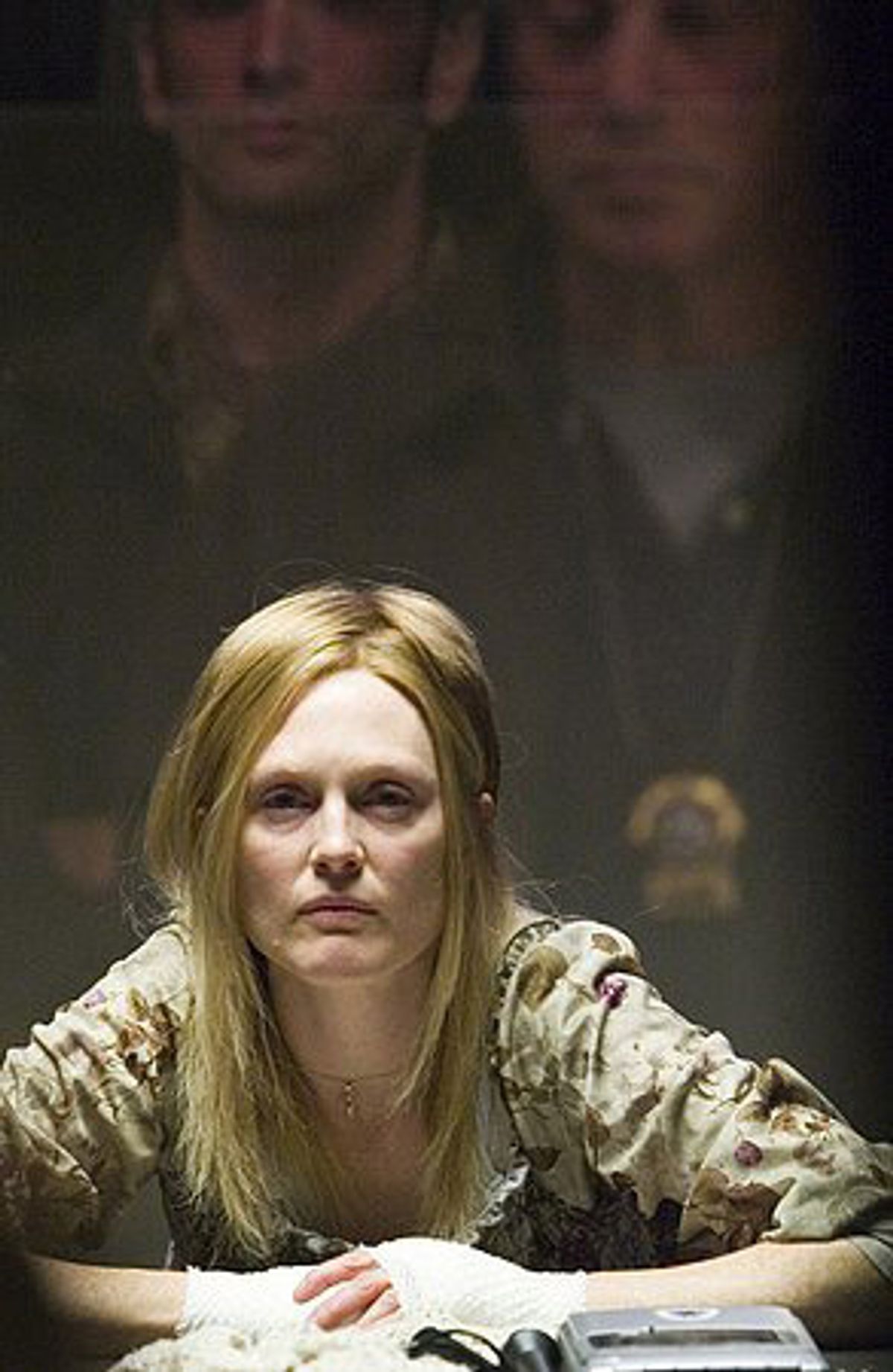 A movie like "Freedomland" -- a somewhat disjointed picture, with performances that tune in and out as if in response to some mysterious radio frequency -- is a tough sell these days. Those of you who are dying to hire a baby sitter and head out to see an anxiety-provoking thriller about a missing child and the long-festering racial tensions that erupt after his disappearance, please raise your hands.

It's a shame, though, that "Freedomland" -- which Richard Price adapted from his novel of the same name -- isn't better than it is. There are places where you can see a subtler, angrier picture trying to kick its way out of the one you're watching, starting with the movie's opening: We watch as a white woman in a loose coat and floppy trousers makes her way, in a shuffling, zombielike gait that's nonetheless unnervingly purposeful, down a series of glimmering night streets. The people around her aren't "like" her, in that they're people of color -- but even more significantly, they're alive and alert in a way that she isn't. They're people going about their business, or hanging around outside because there's nothing much to do, or chatting with their neighbors. We finally see that her long trek has led her to a medical center. When she pushes her way through a door, her hands leave a bloody smear on the glass. It's the kind of opening -- derived straight from the prologue of the novel -- that sets you wondering about what, exactly, you're about to see.

The woman, Brenda Martin, is played by Julianne Moore. Her hair is lank and straw-blond, and her face, in this first scene in particular, is both terrifying and grievous: Her skin is the color of watery cream, but her eyes are so dark they could be portals to another galaxy. Interrogated by police detective Lorenzo Council (Samuel L. Jackson), Brenda explains that as she was driving to her home in a neighboring town -- that is, going from an area with a predominantly black population to one that's almost strictly white -- a black man stopped her and forced her out of the car. But she doesn't immediately tell Lorenzo, for reasons that we automatically attribute to shock, that her 4-year-old son was in the back seat.

The rest of "Freedomland" deals with what happens when the urban housing projects of Dempsy, N.J. -- the town in which the alleged crime took place -- are sealed off by the police of the neighboring, predominantly white town, Gannon, as a way of smoking out the perpetrator. Brenda doesn't come from a privileged background: She's a former drug addict, and the more she talks to Lorenzo, the more details she reveals about how her family always made her feel worthless. But even though she lives in Gannon, she works in a children's center in Dempsy: She knows she's a woman between two worlds, not fully at home in either one of them.

But "Freedomland" isn't the sure-footed picture it needs to be. There are too many places where the filmmaking feels flashy and sleek -- to do justice to the potent ideas of Price's story, it needs more humility and more gravity. The picture moves in fits and starts; it's too sleepy in some places and too sped-up in others. And yet it doesn't allow us a sense of gradual discovery; mostly, we just feel we're having bits of information dropped in our laps.

But the actors take on the movie's challenges admirably. Aunjanue Ellis (who was terrific in "Ray" as Maryann Fisher, and also as Sistah Girl in the sorely underappreciated "Undercover Brother") plays a young Dempsy woman whose sympathy for Brenda sets her apart in the community. Ellis' role doesn't feel sufficiently fleshed out, but she brings so much spirit to the performance that it's easy for us to fill in the gaps. And Edie Falco, as the leader of a volunteer group that helps locate missing children, gives a grave, supremely controlled performance -- a fine example of an actress' cutting into deep emotional territory without "showing" emotion at all.

Moore and Jackson both have some terrific scenes -- just not always together. Jackson is a grounding presence in the picture, and he brings some nice layers of shading to a subplot involving his strained relationship with his son, who's serving a stint in prison for armed robbery. Visiting the kid, Lorenzo expresses disapproval at the sight of a fresh Tupac tattoo on his arm. But when his son cracks a joke, he reluctantly dissolves into laughter; the suggestion is that Lorenzo shares his son's sense of humor, but historically, he's just been too uptight (or too frequently absent) to let himself enjoy it.

Moore is a more confounding case. At times, she seems to be playing an idea of a character, more than an actual person. She unreels the litany of her unhappy past with an unsettling, twitchy anxiety -- she's far too actressy, in a way, and yet listening to her line delivery, I began to worry that she might be so caught up in the performance that she wasn't taking in enough oxygen. This is a performance that can't be pinned down as good or bad -- it's more a manifestation of sheer force of will. When Brenda speaks about her love for her son, Cody, she shows the fierceness of a cornered forest animal, as if she were the embodiment of some primal impulse of motherhood, more than an actual mother.

And in her later scenes, Moore is both heartbreaking and horrifying. Watching her, you feel a peculiar mix of coldness and sympathy -- and even then, you're not sure how to read your own heart. Moore seems stranded in "Freedomland," as if, without even thinking about it, she went much further than the movie even asked her to. "Freedomland," overall, could have been so much better. But Moore, even in a performance as patchy as this one, is something to watch. She's an echo of the movie that might have been.