Cruel to be kind

The animal rights activist who goes undercover in the startling HBO doc "Dealing Dogs" speaks candidly about his willingness to abuse some animals to save the lives of others. 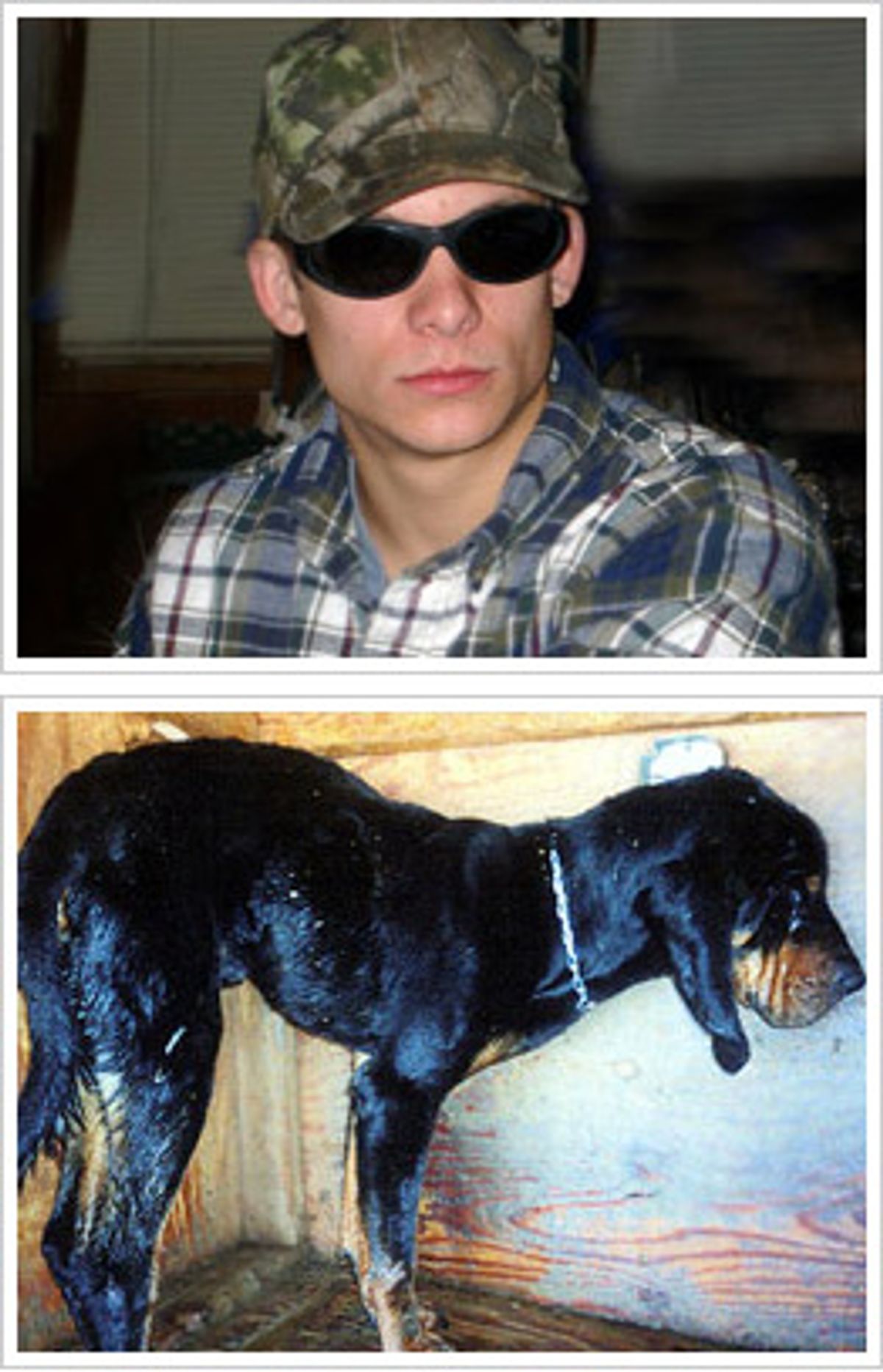 "Dealing Dogs," the documentary about an Arkansas dog dealer who mistreats animals airing on HBO Feb. 21, has the requisite amount of hard-to-watch animal abuse. But the film is riveting, raising issues that transcend the kennel.

Pete (his name is withheld for fear of retribution) is an undercover investigator for an animal rights group, Last Chance for Animals, who gets a grunt job inside Martin Creek Kennel. For six months, he goes to work wired with audio and video recording equipment. The kennel is not an experimental lab where Pete is merely risking the ire of pencil-necked scientists. It's a middle-man operation where unwanted dogs and stolen pets are aggregated to be sold to labs. His co-workers, most of them members of the kennel owner's family, are short-fused -- big-guts and suspenders guys -- and they carry shotguns, for putting down dogs that are sick or ill-behaved.

What distinguishes this documentary from the typical "20/20" exposé is the depth to which it examines the moral and ethical quandaries Pete faces as he's amassing evidence to shut down the kennel. To expose the abuse, he not only had to put aside his vegan-and-no-leather lifestyle but also had to mistreat the dogs while under the watchful eyes of his co-workers. "To not only have to observe the horrific things that he saw but to take part in them," says Tom Simon, the seven-time Emmy Award winner who co-produced the documentary with Sarah Teale, Pete needed to have "a strong enough constitution to handle those kinds of moral dilemmas."

The Martin Creek Kennel investigation, which began in 2002, was Pete's first. It led to its owner, C.C. Baird, having his license to buy and sell cats and dogs revoked in 2005. The U.S. Department of Agriculture fined him $262,700, the largest fine ever imposed under the Animal Welfare Act.

Pete, who for the past four years has continued to work as an undercover animal rights investigator, has no permanent address, no pets, no romantic relationship. He will reveal very little about himself. He looks to be in his mid- to late 20s, but he won't say. He has no discernible regional accent. He says he's had some college but didn't finish.

For all the mystery, the filmmakers do conspicuously little to disguise Pete in the documentary. When he's interviewed, he wears a baseball cap and sunglasses, and it's hard to imagine not being able to pull him out of a lineup. Pete was hoping that HBO would blur his face and mask his voice, or allow him to wear something more concealing, like a ski mask. But, Simon says, "It was not acceptable to HBO -- and not acceptable to Sarah Teale and me -- for him to be totally obscured. Because it is a character-driven story about this guy as much as the investigation, it was important for the audience to be able to see his face."

Ultimately, Pete believes the exposure was worth it. "On the one hand I could maximize my future effectiveness as an investigator and not talk about my methods or do anything that might I.D. me," he says. "And on the other hand, I could get national exposure for an issue. I chose to do that."

Salon spoke with Pete last week on the phone. He is on another undercover assignment and wouldn't say where he was.

In the documentary, someone says that you don't look like an activist.

Yeah, that's true. If you see me on the street, you're definitely not going to think I'm an activist.

What am I going to think?

How's the work that you do different than that of an undercover cop or humane agent?

I don't plant evidence, I don't change evidence, but I do whatever it takes to obtain evidence -- regardless of what the law says. There are a lot of good police officers out there, but most police are good old boys that don't care, most humane agents are good old boys who don't care, and the USDA is always against us. They never cooperate with animal rights activists or investigators in the slightest bit.

So you just do whatever it takes to get on the property, including trespassing, send off the footage to the press or the USDA, and then you create pressure for law enforcement to have to act. Now, the police will often really hate us for doing that, but my personal experience is that it's always better to ask for forgiveness than permission because 99 times out of a hundred the cops will burn us and not help us.

When you moved to Arkansas, why did you first get a job at a McDonald's instead of applying directly to the kennel?

Usually what I do is get another job so I already have a job and then I go in to apply at a kennel. That way I am a local. And I have to have a shit job that nobody's going to want. The kind of kennels that I'm applying to are horrible jobs, but still have to be a step up from the job that I'm working. So McDonald's is my first pick -- it's just a terrible place to work.

And who would suspect a vegan of flipping hamburgers?

Exactly. What animal activist is really going to be working at McDonald's?

Has your cover ever been blown on an assignment?

My cover's never been blown, but I've come really, really, really close. I've never had my equipment blatantly fall out and someone see it. But I had something close to that happen at Martin Creek Kennel: I had my mike stick through my clothes so that my clothes bulged out. And one of the employees actually grabbed the mike through my clothes and he said, "What the hell is that?"

So basically what I did -- personally, I have a lot of gay friends, I'm not homophobic at all -- but what I did to quell the situation is said, "What are you a, a butt-fucking faggot?" And apparently that offended his heterosexuality so bad it stopped him. And he didn't comment about it to anybody.

Do you worry about retribution?

I'm making people think that I'm their friend and then of course I'm turning evidence over on them. There's way more people in this world that hate me than like me. Out of all of the people that I encounter and that I deal with in my life, most of the people I know really want to kick my ass, because most of them are targets that I've worked.

If I were to run into one of these guys, I would have some major problems. All I can say is I know how to defend myself and I know how to handle myself. In case they want to draw a weapon, the closer I am to them the better.

Have you ever been on assignment when other workers start insulting animal activists?

How do you prepare yourself psychologically to take part in animal abuse?

Basically what you do is, you put yourself in a mindset: If this is the person that I am, what is my motivation? My motivation is to get a paycheck. That's the only thing I care about. The abuse -- it's easier to do than you think if you're able to step outside yourself. Still, I would do things to those dogs where I would finish the job and I would go home at night and I'd review my footage and I was embarrassed to write down in my field notes the things that I'd done.

At one point at Martin Creek Kennel there were two dogs fighting so I grabbed them by their scruff and I pulled them apart and got in their faces and I yelled at them to stop. So the dogs stopped. I have a lot of experience working with dogs and I knew it would work. But afterward, a guy named Bill said, "Yeah, just nail him in the face." So I smacked this dog in the face and the dog bounces off the wire wall and hits the concrete floor and just lays there motionless on the ground looking at me.

That bothered me, but it was nothing compared to when we were throwing these dogs in this freezing tank of insecticide and then dragging them out. It was freezing outside and they were in shock, choking from us dragging them by their necks. It's one of the worst things that I've ever done.

Was there any instance when you didn't do something on the job because it was just too horrific?

I've witnessed and I've done some really bad shit, but no, I've never shied away from something I've had do. In the Philippines I paid money to have a dog slaughtered in front of me.

The premise was you were buying it for meat?

Exactly. I worked for a Filipino who went out and I filmed it while he walked up there and got the dog slaughtered.

How do they slaughter them -- with guns?

No, they take a big metal pipe and they bash them in the skull -- but they don't bash them too hard because people eat the brains, too. So they beat it in the head a few times. Then they blowtorch the body to burn all the hair off  That was rough.

There's a scene in the documentary when you secretly film someone shooting a perfectly healthy dog. What would you do if you were undercover and someone handed you a gun and told you to shoot a dog?

I would shoot the dog. I know I would. If they tell me to hit it, or kick it, or throw it, I know I'll do that because I've done that before. I've worked at a place where we would throw animals around like you wouldn't believe. And it was unnecessary, but it's what they did, so it's what I did.

Can you imagine a scenario where you'd be on assignment and someone will say, "Go do this," and you won't be able to?

Andrew Adam Newman lives in New York and is a frequent contributor to The New York Times.