Divorced and depressed, Elizabeth Gilbert traveled the world in search of peace. She came back happy, healthy, and with a story to inspire us all 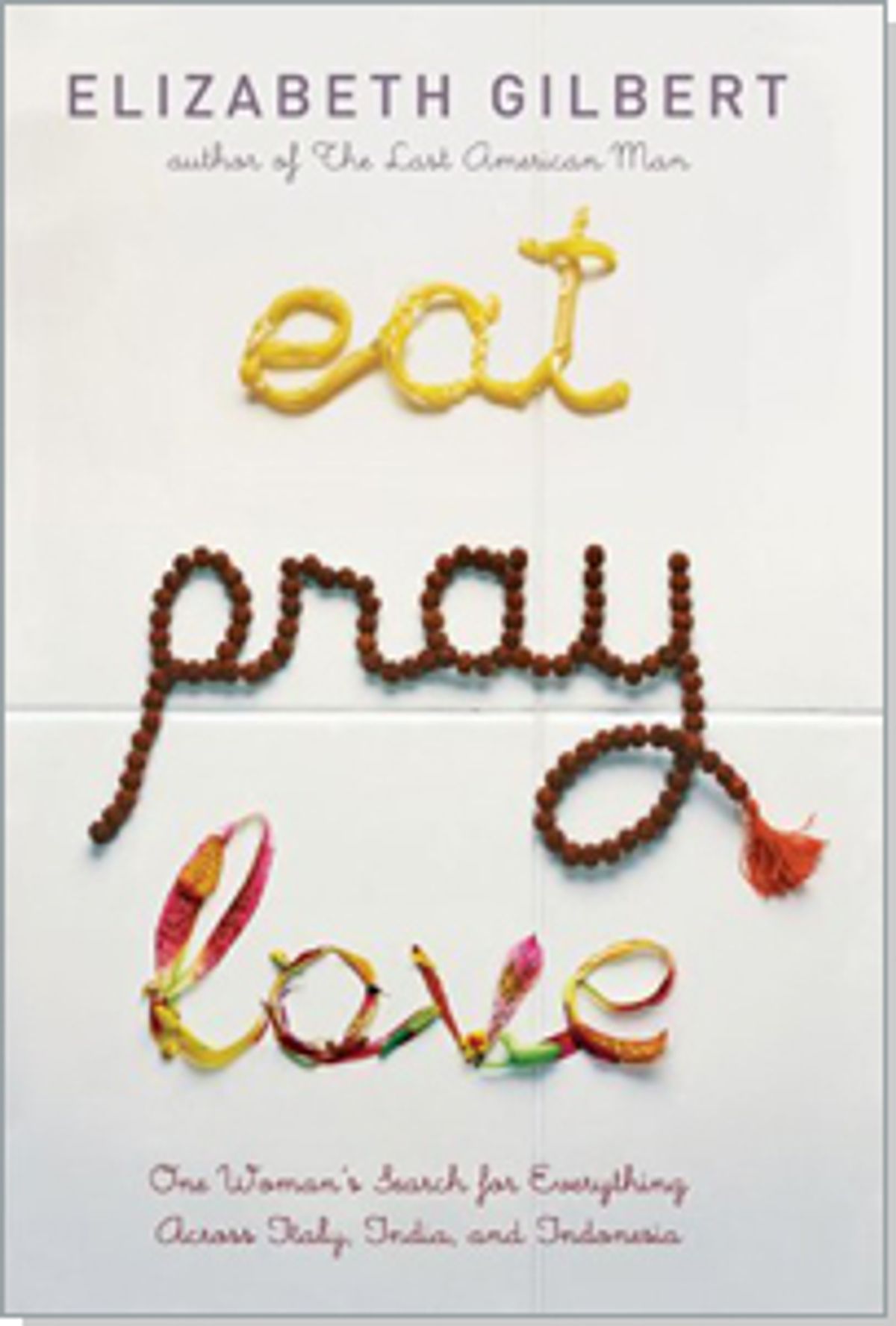 Reeling from an ugly divorce, hobbled by debilitating depression, and suffering from a particularly noxious case of obsessive love, Elizabeth Gilbert did what most of us only fantasize about doing when our lives are falling apart: She split. Unencumbered by children or an office job, the 34-year-old writer secured a book deal and took off for a year to take in three locales she felt could help heal her battered psyche. "Eat, Pray, Love: One Woman's Search for Everything Across Italy, India and Indonesia," the chronicle of that journey, is equal parts travelogue, self-help book, and spiritual memoir. It is the story of an ambitious and accomplished New Yorker who one night finds herself on the bathroom floor of her Hudson Valley home, sobbing and praying to God for the first time in her life: Please tell me what to do.

That night marks the beginning of Gilbert's "conversation with God." Though she is felled by depression, Gilbert, through prayer and meditation, realizes that she has to doggedly pursue that which eludes her (and most of us) -- contentment, forgiveness, grace. She finds a spiritual teacher -- an Indian guru with tens of thousands of devotees -- and begins chanting with a group of her followers in New York, "regular-looking people praying to God." After hearing the guru speak in person, and finding herself with "chills bumps" over her whole body, even the skin of her face -- she decides to get serious about her spiritual practice. And so she sets off to Italy to explore the art of pleasure, to India to practice the art of devotion, and to Indonesia to practice the art of balancing both.

Gilbert's voyage begins in Rome, where she rents an apartment in an upscale neighborhood and signs up for Italian lessons for no reason other than that the language is "more beautiful than roses." She has taken a vow of celibacy because of her "boundary issues" with men, and yet befriends several handsome and charming Italians -- one with the memorable name Luca Spaghetti -- with whom she practices conversing and goes to soccer games. Gilbert surrenders fairly quickly to the Italian art of pleasure seeking. "All I had to do, for the first time in my life, was ask myself every day, 'What would you enjoy doing today, Liz? What would bring you pleasure right now?'" Most often the answer is speaking Italian and eating, and Gilbert's descriptions of food can be downright lusty. In a Sicilian pizzeria she samples a "thin doughy, strong, gummy, chewy salty pizza paradise ... with sweet tomato sauce that foams up all bubbly and creamy when it melts ... the hot cheese runs away like topsoil in a landslide." And then: "I love my pizza so much ... that I have come to believe in my delirium that my pizza might actually love me in return." Gilbert arrives in Italy "pinched and thin," and leaves a student of decadence, with 20 extra pounds and "the idea that the appreciation of pleasure can be an anchor of one's humanity."

Gilbert is prone to hyperbole -- as the previous line suggests -- and an excessive reliance on italics. She can be self-congratulatory and self-absorbed, which I suppose is an occupational hazard with a spiritual memoir like this. Yet Gilbert is also an irresistible narrator -- funny, self-deprecating, fiercely intelligent. Throughout, her writing has the crisp, breezy quality of someone who has churned out thousands of words for glossy magazines, as Gilbert has. (She is also the author of a short story collection, a novel and the nonfiction book "The Last American Man.")

After Italy, Gilbert heads to India. An experienced yogi, she applies to spend six weeks at an ashram run by her guru. The idea is to master the "relentless thought-processing, soul devouring machine" that is her brain. The schedule at the ashram includes pre-dawn meditations, scrubbing floors, vegetarian food, silent meditations in caves -- and lots of socializing. Gilbert -- vivacious, chatty, warm -- makes friends easily and is soon anointed "key hostess," in charge of making sure that visitors who come to the ashram for silent retreats are taken care of. (She calls herself "Julie McCoy Yogic Cruise Director.")

It is at the ashram where Gilbert meets "Richard from Texas," one of the many characters -- notice I didn't say people -- who populate her narrative. Richard, with his no-nonsense, homespun wisdom, plays a critical role in Gilbert's spiritual journey. When she is having trouble controlling her thoughts while meditating, Richard reminds her that "right now, your ego's scared to death cuz it's about to get downsized. You keep up this spiritual path, baby, and that bad boy's days are numbered." When she's desperately missing her lover back in New York, he counsels: "You're wishin' too much, baby. You gotta stop wearing your wishbone where your backbone used to be." After weeks of absorbing Richard's advice -- and doing some serious work to overcome the tripwires of her mind -- Gilbert finally unites with God during a particularly intense meditation session. "I got pulled through the wormhole of the Absolute, and in that rush I suddenly understood the workings of the universe completely. I left my body, I left the room, I left the planet, I stepped through time and entered the void ... I just was part of God. In addition to being God, I was both a tiny piece of the universe and exactly the same size as the universe ... It wasn't hallucinogenic, what I was feeling ... It was the deepest love I'd ever experienced, beyond anything I could have previously imagined."

Like hearing about other people's dreams, reading about other people's spiritual epiphanies is, in general, just not that interesting -- they're really only meaningful to the person who's having them. And yet, instead of rolling my eyes at Gilbert's descriptions, I was captivated by them. Gilbert is such a sincere seeker, such a hard spiritual worker, it's impossible not to applaud her breakthrough. Without getting all serious and preachy -- without renouncing all worldly pleasures -- she devotes herself to an intense spiritual practice, one that doesn't seem so foreign or alienating as to be out of reach to the rest of us.

Finally, Gilbert takes off for Bali, and settles in a village of "pink clouds," rice paddies, lush equatorial flowers. She goes there to study with a medicine man, Ketut, whom she had met two years earlier while on a magazine assignment. Her days on the island unwrap like gifts, with mornings spent in meditation and prayer, and afternoons sipping coffee with Ketut or gabbing with a bawdy healer named Wayan and her daughter, Tutti. Like I said, Gilbert seems to have an uncanny ability to befriend characters. All of the people who propel her story seem almost fictional because their words and actions are so perfectly crafted and her good fortune seems limitless. She comes to Bali with no place to stay but finds a pristine cottage on a hill with gardens for meditating and a red kitchen. Wayan needs money to buy a new house, so Gilbert sends a mass e-mail to her friends in the U.S. and raises $18,000. Gilbert has no intention of falling in love, but meets a sexy, older Brazilian man who becomes her passionate and attentive lover. Gilbert develops a serious bladder infection -- which Wayan cures with herbs, in an hour and a half. Is it possible for one person to be this lucky?

People have been telling tales of spiritual transformation for centuries, and Gilbert's isn't all that different: Broken and spent, she finds God and returns from her journey healed. So it's not so surprising that at the end of the book Gilbert is exactly where she set out be -- content and balanced -- with the bonus of being in love. It's hard not to think, like the old woman sitting next to an orgasmic Meg Ryan in "When Harry Met Sally," "I want what she's having!" But then you remember that Gilbert had freedoms that most of us don't. In order to overcome ourselves, we need time, space, resources; it's hard to find yourself when you have a full-time job, a couple of kids, a mortgage to pay. Most people who pick up this book will know from the very first page that they will probably never have the chance to take a similar trip.

Yet not once did I get the feeling that Gilbert was trying to convince anyone that her spiritual path is the only one, or the correct one, or that it's even necessary to take one. Hers is a solo journey, and we're just lucky enough to be along for the ride.