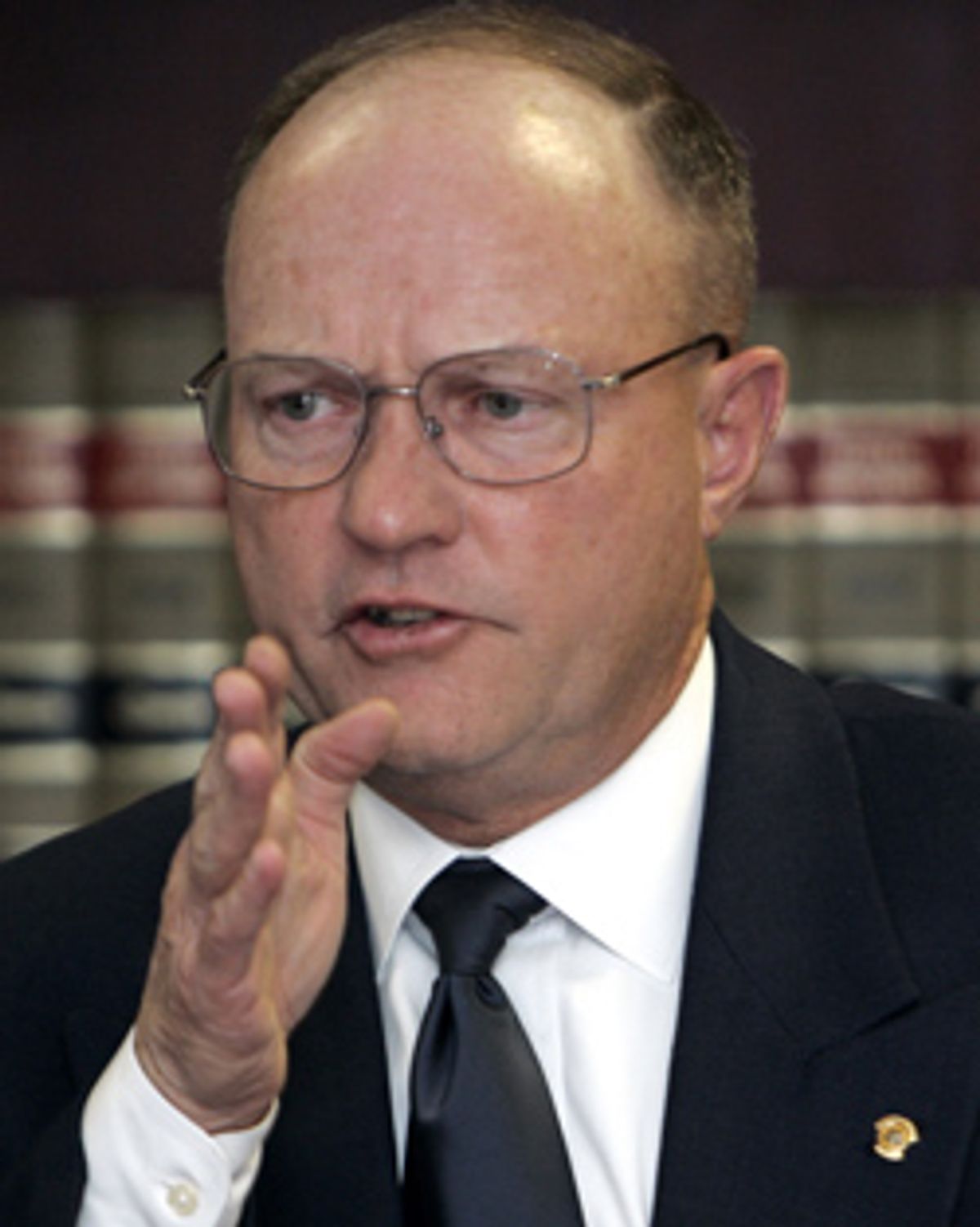 There's been no shortage of former high-level insiders going public with fierce criticisms of the Bush administration. But since first speaking out last fall, Lawrence Wilkerson, a retired Army colonel who served as former Secretary of State Colin Powell's chief of staff, has proved the fiercest. In a watershed speech at the New America Foundation in October, Wilkerson delivered a blistering indictment, charging that on vital national-security matters, the White House was run by an anti-democratic "cabal" led by Vice President Dick Cheney and Defense Secretary Donald Rumsfeld.

Wilkerson has also suggested that he and his boss at the State Department were duped by the case for war forged inside the Pentagon and CIA under the close watch of Cheney and his top aides. He and Powell were kept in the dark about doubts over Iraq's WMD capabilities, even as they worked to vet the intelligence before Powell's landmark pro-war presentation to the U.N. Security Council in February 2003. It turned out to be built on a stockpile of fictions.

But Wilkerson said bogus intelligence isn't his principal reason for coming forward -- it's the use of American forces to torture prisoners in the war that it launched. In mid-February, against a backdrop of new revelations about torture at Abu Ghraib and a call by U.N. investigators to shut down the U.S. prison at Guantánamo Bay, Wilkerson sat down for an interview with Salon, following a panel on national security at the University of Maryland. Last fall, he had spoken of a "visible audit trail" on torture leading from the soldiers in the field all the way up to Rumsfeld and Cheney.

Wilkerson said that by the time of the Abu Ghraib revelations in spring 2004, he began to realize how "deeply contaminated" the military had become due to post-9/11 interrogation policies. A military man of 31 years, he knew that the widespread abuses could have taken place only if sanctioned from high up in the civilian and military leadership.

Powell, who had served as the nation's top general under the first President Bush, apparently knew so, too. "When the word was out that the Abu Ghraib photographs were about to break, the secretary of state walked through my door and said, 'Larry, I need you to get together with Will Taft [Powell's lawyer] and build me an audit trail. I need all the paperwork -- I need a description of how we got to where we are.'"

Over the next several months, Wilkerson developed a dossier of both internal and public materials that pointed to the vice president's office. "I saw a chain of information and orders going out to the field that were codified in memoranda," Wilkerson said. "Reading between the lines -- and sometimes even reading the lines -- they essentially said, 'This is a new war. These people are different. Geneva doesn't apply, and we need intelligence. So smack these guys, stack 'em up. Use whatever means you need.'" The materials he gathered and the many communications he had with people in the field formed a clear picture. "What got implemented in the field," he said, "was the position Cheney and Rumsfeld argued for all along: gloves off."

In response to the initial wave of Abu Ghraib revelations, Rumsfeld said in a congressional hearing on May 7, 2004: "Mr. Chairman, I know you join me today in saying to the world: Judge us by our actions. Watch how Americans, watch how a democracy deals with wrongdoing and scandal and the pain of acknowledging and correcting our own mistakes and weaknesses."

While a handful of enlisted soldiers have since been convicted of crimes, no high-level U.S. officials have been brought to justice for wrongdoing. International law as well as the U.S. military's doctrine of command responsibility holds that officials -- military or civilian -- who condone or allow subordinates to commit torture can also be held criminally liable. But the military has thwarted investigation "every step of the way," Wilkerson said. "I got little help from the services," he said of his work on the torture dossier. "Vice Admiral [Albert] Church [who led one of the military's own investigations into torture] more or less stonewalled me. Others stonewalled me. There's been an awful lot of coverup."

According to Wilkerson, one of several memos signed by Rumsfeld approved dozens of interrogation techniques, which were posted in Abu Ghraib. One item on the list sanctioned the use of military dogs. "When you tell an E-4 [an Army corporal] or E-6 [staff sergeant] they can use a dog as long as it's muzzled -- and you also put heavy pressure on them to get intelligence -- it's clear what happens next. Once that muzzled dog fails in that interrogation session, the next thing they're going to do is take the muzzle off."

More abominable, Wilkerson said, is that these conditions weren't set just for suspected al-Qaida or Taliban members, but for any of the tens of thousands of prisoners taken in Iraq whom Bush had declared entitled to Geneva protections. The military has acknowledged that the vast majority of prisoners in Iraq -- as well as the majority of those in Guantánamo -- have been of little or no intelligence value.

Wilkerson, 60, exited the Bush government along with his former boss in January 2005; he now teaches at George Washington University and the College of William and Mary. He speaks in direct and sometimes folksy language, his accent evocative of small-town South Carolina, where he grew up. The son of a World War II veteran, Wilkerson decided in 1966 to drop his English lit studies at Bucknell University and to serve in Vietnam. The Army career to which he dedicated half his life began with service as a helicopter pilot scouting for the infantry, which took him repeatedly into heavy combat.

After the war, Wilkerson attended the elite Airborne and Ranger schools, completed his B.A. and earned advanced degrees in international relations and national-security studies. He attended and taught at the Naval War College in Newport, R.I., and went on to serve as acting director of the Marine Corps War College at Quantico, Va. Wilkerson met Powell in 1989, beginning his 16 years on Powell's staff as an aide and speechwriter, rising to become Powell's top deputy during George W. Bush's first term.

Naturally, Wilkerson has drawn fierce counterattacks for his criticisms, notably from the president's loyal lieutenants. As Powell's point man for preparing the case for a war on Iraq, he received top-level intelligence briefings. Nevertheless, in November, Rumsfeld called Wilkerson's charges "ridiculous," telling CNN, "In terms of having firsthand information, I just can't imagine that he does." Gen. Peter Pace, chairman of the Joint Chiefs of Staff, stated that he had no recollection of Wilkerson's attending meetings with military commanders, the National Security Council or the president. "I have never seen that colonel," Pace said.

Wilkerson responded to a recounting of those comments by noting that Pace had been his immediate supervisor back at the Marine Corps War College. "We sat in the chapel together when a dear friend of ours was buried," he said. "He came into my seminars. Pete Pace not knowing me? Come on. That was an embarrassing moment."

Wilkerson has the ability to listen keenly and hold his opinions in reserve. During the panel discussion at the University of Maryland, he sat back as fellow speaker Frank Gaffney, the tenaciously right-wing founder of the Center for Security Policy in Washington, responded to most audience questions by preaching about the apocalyptic horrors likely to be unleashed on America and the rest of the civilized world by "Islamofacism." Still, by the time Gaffney declared, "Like it or not, we're in a war that will last the rest of our lives, and likely our children's and grandchildren's lives," Wilkerson rolled his eyes, and along with a slight, incredulous smile, glanced at his watch.

Wilkerson's voice rose in anger when he discussed what he saw as the "hijacking" of policy inside the administration. "Those people are not conservatives," the lifelong Republican said of Cheney and his inner circle. "I'm a conservative. Those people are radicals."

Accounts of the manipulation of intelligence by administration hard-liners in the march to war have continued to emerge in recent months. In 2003, when Powell presented his case to the United Nations on Saddam Hussein's biological weapons, he relied heavily on intelligence gleaned from an Iraqi defector code-named "Curveball." But according to an in-depth report published in the Los Angeles Times in November, top CIA operations officials, including then chief of clandestine services James Pavitt, had grave doubts about Curveball long before Powell's U.N. speech. They'd determined Curveball was unstable, an opportunist and a fabricator, and had sounded the alarm about him repeatedly. "My people were saying, 'We think he's a stinker,'" Pavitt, who retired from the agency in August 2004, told the Times. But former CIA director George Tenet, who had told the president there was a "slam dunk" case for war, maintained that deep skepticism about Curveball never reached him.

"Preposterous," Wilkerson said. "It's extremely difficult for me to believe that James Pavitt's doubts didn't get through to Tenet. Pavitt was one of Tenet's principal operators in the CIA."

Today, Wilkerson continues to see an administration that punishes dissent, pushes a radical reinterpretation of the Constitution, and exploits executive power. "Brent Scowcroft said he didn't recognize Dick Cheney anymore," he said. "I don't know Dick Cheney as intimately as Scowcroft does, but I did see him as secretary of defense and now as vice president. I can tell you that 9/11 made him a paranoid, to the extent where I'm not sure his exercise of power carries with it reason."

"I've been told by several Republicans that Cheney was the first vice president ever to come sit down in the middle of a [Senate] caucus and chide the members on their votes," Wilkerson added. "This is not going to the CIA, where he also exercised undue influence -- this is going to the Congress and using the office of the vice president essentially to intimidate lawmakers in their discussions."

Wilkerson expressed genuine concerns about terrorism. But he said the administration has played the fear card with lawmakers by suggesting that if the United States gets hit again, it will be their fault unless they back such policies as warrantless spying on Americans and the brutal interrogation of prisoners.

Such interrogation led Wilkerson to cite Aharon Barak, the chief of the Israeli Supreme Court, which ruled against the torture of prisoners in 1999. "This is the destiny of a democracy, as not all means are acceptable to it, and not all practices employed by its enemies are open before it," Barak wrote in the decision. "Although a democracy must often fight with one hand tied behind its back, it nonetheless has the upper hand."